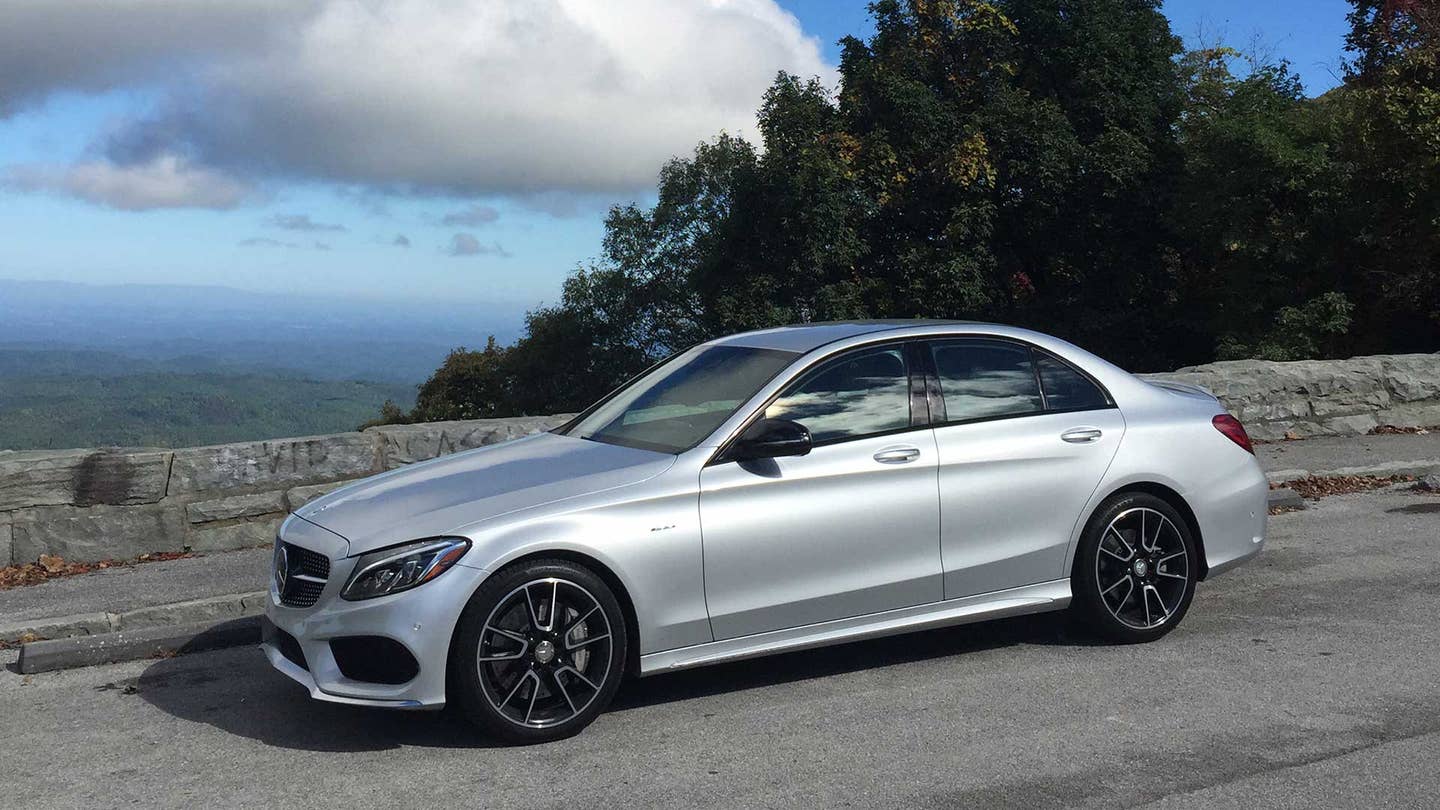 My intention when I woke up before dawn and launched the Mercedes-AMG GT S up the Saw Mill River Parkway to Westchester County was not to disturb the grazing cows. Nor was it to upset the weekend routines of the landed gentry who quietly persist in colonial towns like Bedford and Pound Ridge. But there I was, wringing the fuck out of a car that resembles tremendous manhood on wheels and that has an engine—a 4-liter V8 biturbo—that sounds nothing like a whinnying horse or a gentle breeze ruffling the leaves on an ancient oak.

In the truest and sense, I disturbed the early autumn peace of the Town and the Country. I tore around corners, I launched over blind crests. Stone walls were a granite-gray blur. I dominated streets named after Civil War colonels. Coffee spilled all over my lap and splashed onto the windshield as I mashed my toe into the brakes and then the throttle.

This is a serious goddamn sports car. The visibility isn’t great, and the hood lurks along the lower sliver of your vision, but every other sense is so amped up that you feel like you can see right through those thoroughbreds fleeing in the fields. It is a car for superman. I am ashamed of my behavior on these roads, and yet I regret nothing.—Mike Guy, Editor

You have to boil down something like 40 gallons of sugar-maple tree sap to make one gallon of maple syrup. The Alfa 4C Spider is similarly distilled. It is as though the Italians took all of the sports car DNA they're credited with creating over the past 110 years, and extracted only the essential.

I wouldn't want to drink a gallon of maple syrup, but a hearty pour atop a stack of fresh homemade blueberry pancakes is a requisite and delightful add. Likewise, I drove 300 miles in the 4C Spider on a series of perfect, clear autumn days at the height of the foliage change, and the experience was transformative.

No one is living on maple syrup and no one is buying this car as their daily driver. Its sweetness is undeniable, but I'm not trying to get diabetes.—Brett Berk, writer-at-large

This car was really no different than the one that entered production in 2010: a restyled LED headlight here, an enhanced multimedia display there, maybe a new wheel package. And yet no other car I’ve driven in the past three months elicited more envious glances or unsolicited compliments. “Nice car” indeed, especially in Moonlight Blue metallic, with its barely there, subcutaneous purple flecks.

There is nothing suspect about the telltale TDI badge on the liftgate here. It connotes a sweetly pulling 240-horsepower V6 turbodiesel (whose exhaust is treated onboard by AdBlue NOx-scrubbing solution) delivering over 30 mpg on the highway. Two grown-ass adults complained not a whit about heads hitting the dramatically arched rear hatch glass, despite the inevitable (gentle) contact over speed bumps.

The Dynamic drive-mode setting is the only one a driver with red blood cells would ever want, though the steering doesn’t tighten as smartly as in the A7’s rocket-grenade S7 spec. No matter. Were the bills paid, fetus’s college fund brimming, poverty eradicated worldwide and $80,375 idling under my mattress, this is the one I’d pick.—Jonathan Schultz, deputy editor

I parachuted into small down America with an Audi R8 V10 Plus, a red one with a seven-speed dual-clutch gearbox. And I drove the pants off that car. Tore through the mountains, making all the V-10 noises, powersliding damp hairpins and trying to break the gearbox. Then I ate inside a shack and saw Shakespeare performed in Staunton, Virginia. Read about it here.

Not that we ever lack a reason to go road-tripping, but it helps when this gleaming white adventure-mobile shows up in the driveway. We head straight for NorCal Wine Country in the heart of harvest (pictured: Loomis, Calif., headed east toward Placerville).

This car strikes us as awesomely versatile. A great ride for a soccer mom in yoga pants. Cool wheels for a commuter who carries his golf clubs and/or his bike in back. But we love it for its ability to spark wanderlust. While fondling these keys, you feel like you’re letting yourself and the car down if you’re not busy filling a cooler and dumping the dead spiders out of the sleeping bags. Obligations shmobligations—leave ‘em in the rear view.

By the numbers: a turbocharged, 2.5-liter, 250-horsepower five-cylinder. The base is $41K (though ours had the Platinum package with the Harman Kardon sound system among a heap of other awesome options).

Now if you’ll excuse us, we’re going to head back out and get this car absolutely filthy.—A.J. Baime, editor-at-large

This past weekend was the Vermont Beast, a six-hour-plus Spartan race in the mountains around Killington Resort, and I found myself without a ride to get there. Our friends at Classic Car Club Manhattan swooped in for the rescue.

I first discovered this car on Top Gear, where Jeremy and the crew couldn’t stop talking about how bad it looked... and how fantastically it drove. I actually don’t mind its lines at all. And will have to agree with the performance. It's still very much a Porsche. Everything feels right from the moment you sit in it.

Can it be the best sports luxury sedan on the market? Four tired but comfortable obstacle racers wouldn’t disagree.—Edouard Portelette, vice president of business operations, advertising