A daring redesign sets the G90 apart and points the way for future Genesis models. 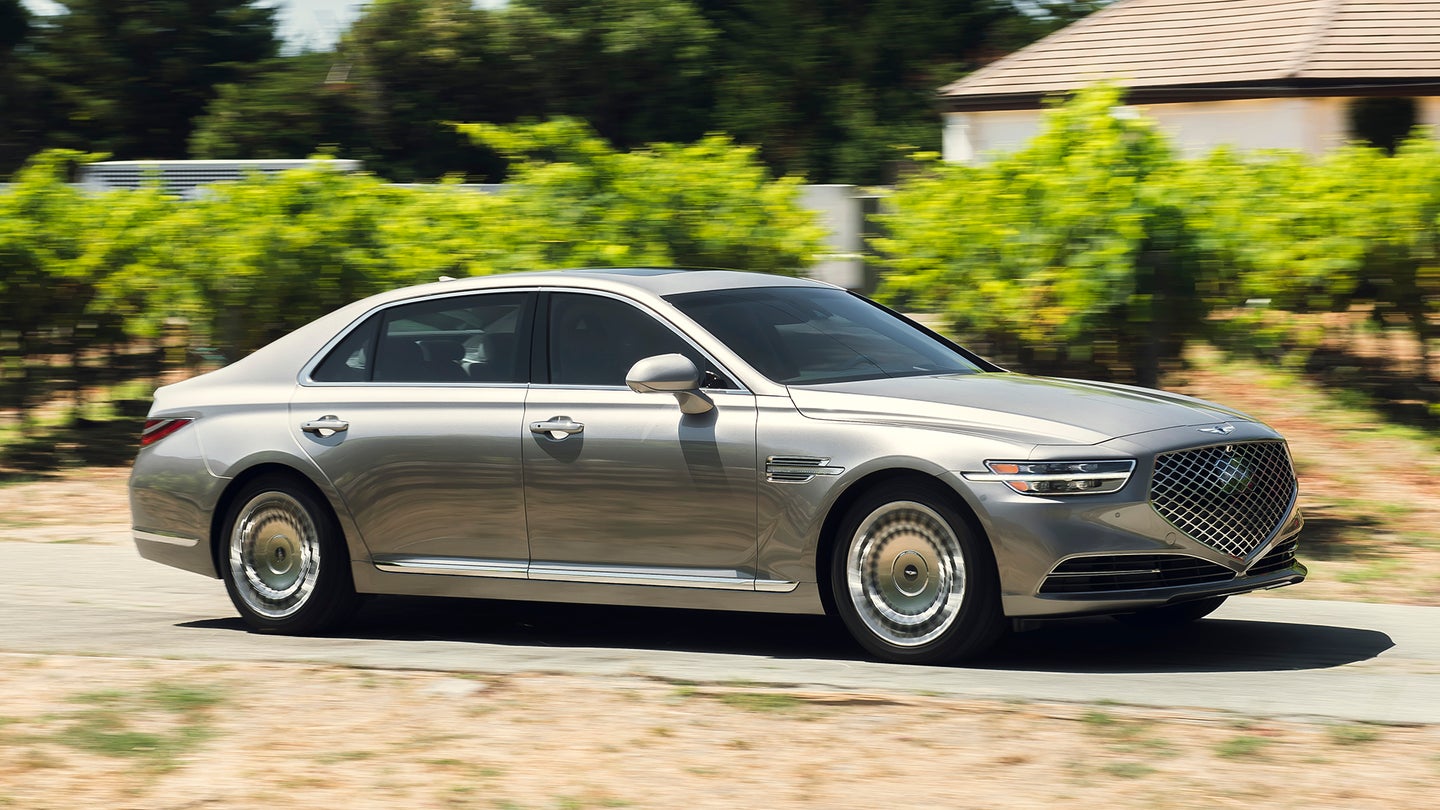 While the spritely Genesis G70 might be getting all the accolades and attention—if not the sales, yet—it’s the outsized G90 that spearheaded the launch of Hyundai’s luxury division just four years ago. Building brand equity, however, takes a lot longer. Genesis relied upon the successful strategy of delivering more car for less money to gain a foothold in this hotly contested market, and the old G90 delivered on that feature-packed promise in spades. Also, in extremely boring fashion.

As it turns out, luxury car buyers also want some style to pair with their substance, like a pour of Chateau Lafite Rothschild with a juicy Tomahawk ribeye. The original G90 just didn't stand out from the pack in any measurable way. For 2020, it's safe to say the Genesis G90 no longer has a style problem.

In Your (New) Face

The first thought that comes to your head is holy crap, this car is big. It just goes to show you how much visual perception matters. Though its wheelbase (124.4 inches) and overall length (a hair under 205 inches) are unchanged from the old design, the new sheetmetal gives the G90 a commanding presence its milquetoast predecessor lacked.

Up front, of course, is that striking grille. Coined the “Crest,” it’s a huge expanse occupying most of front facia's real estate and tapering down to a point on the lower valance. Equally imposing headlight clusters are bisected by a horizontal strip of daytime running lights. The visual theme continues on the side, with fender-mounted turn signals nestled between decorative vents.

An arresting 19-inch basketweave wheel design somehow manages to look both beefy and delicate, a tasteful counterpoint to the current trend of stuffing wheel wells with massive rims. Out back, a full-width taillight treatment spans the trunklid and around to the rear quarter panels. Crest-shaped twin tailpipes complete the makeover.

While the overall look certainly makes an impression—the res publica remains divided, though we're among its fans—it also thankfully makes a clear and confident statement. The meek, reductive design language that plagued the G90 is dead. During our test drive through car-obsessed (some might say car-weary) Los Angeles, several bystanders across all age groups reacted vividly as the G90 cruised past. Love it or hate it, this intentionally polarizing design is a head-turner.

Changes to the interior are far less dramatic, but Genesis didn’t need have much to improve here. The G90's infotainment system gains a higher resolution 12.3-inch touchscreen, though its inset placement deep in the dash proves to be a bit of a reach for both driver and passenger. Thankfully, the console-mounted control knob remains. It’s also nice to see some color added to the mix, as blue, brown and a two-tone beige are new interior options, and open-pore matte wood replaces gloss. Of the three, the blue interior is the most fetching and looks fantastic with the new wood trim.

One of the more interesting additions for 2020 is what Genesis calls Seat Posture Care, which calculates an ideal seating position based on your inseam and weight and adjusts the seat accordingly. It’s a neat idea, and your back will thank you for it. If the system could somehow measure arm length, we’d find it even more useful.

A luxury car's cabin is obviously a make-or-break experience for buyers—if it ain't fancy, what are we even doing here?—and there are a few key areas where this S-Class fighter stands its ground against the Germans and Japanese. One is sound insulation: The G90 is astoundingly quiet, with wind noise virtually absent at highway speeds and tire roar kept to a minimum by smart acoustic tech. It's also just as comfortable as its pricier rivals. Palatial, eight-way-adjustable rear seats offer over three feet of legroom and heat/ventilation/massage functions, and they're wonderfully soft in a worry-free-one-percent kind of way.

That said, the Genesis G90 interior still lacks some of the refined touches that, however ridiculous, signal a company truly at ease with their task, things like Mercedes' insanely customizable ambient lighting or the BMW 7 Series' pop-out tablet controller for the backseat riders. You'll also notice a few dissonant notes in material quality; curious fingers will be disappointed to find gaping screw holes and coarse-grained plastic on the back of the Hyundai-sourced steering wheel and on the column shroud. The sun visor rail visibly wobbles on its mount, particularly when the visor is pulled to the side and extended across the window.

As before, the G90 is offered with your choice of a 365-horsepower, 3.3-liter twin-turbo V6 or a 420-hp, 5.0-liter V8. Each engine is linked to an eight-speed automatic and available with rear- or all-wheel drive. Of the two motors, the V8 is much better suited to the large-and-in-charge character of the G90. It has a warm, smooth way of moving the big sedan with authority, going about its business with a pleasing burble. There's no turbocharging here—like the six-speed manual in the midsize G70 sedan, the G90's naturally-aspirated V8 is the last of its kind in its segment.

Last year, the V8 represented about 25% of G90 sales, and Genesis expects a similar take rate for 2020. If we hadn’t been so charmed by the V8, perhaps the turbo V6 would have made a better impression. This same motor is a standout in the G70 as well as the Kia Stinger, but in the heavier G90, it feels slow off the line and suffers from noticeable lag in the midrange.

Regardless of powertrain, the G90 is not a sport sedan by any stretch of the imagination with its coil springs and adjustable dampers. It won't set any lap records—that's different than saying it wouldn't be fun on a track, mind you, because big cars are always fun—but that's not its purpose. Instead, the ride is beautifully supple and composed and clearly tuned for normal daily driving. The G90 is here to protect you from the horrors of the road below. That's what it does best.

Starting around $72,000, the 2020 G90 is a phenomenal value for the money, undercutting rivals like the Audi A8 and BMW 7 Series by more than ten grand. You can’t get into a Mercedes-Benz S-Class for less than $94K, and even the Lexus LS costs a few thousand more than the Genesis. Plus, the G90 comes standard with a whole host of driver safety features like adaptive cruise and lane-keep assist that are optional elsewhere. And if you want V8 power, you’ll spend well over six figures on any of the Germans, while the LS no longer offers a V8 at any price.

But value has never been the real issue, has it? No, the thorny question is always whether that value matters to image-conscious luxury buyers when it's not accompanied by at least a little flash. The G90 has been an impressive and easily ignored package—now we can strike that second bit from the record. The new model at last brings an extroverted elegance to match its spacious interior and commendable road manners. The biggest downside? Now the rest of the Genesis lineup looks dowdy by comparison.