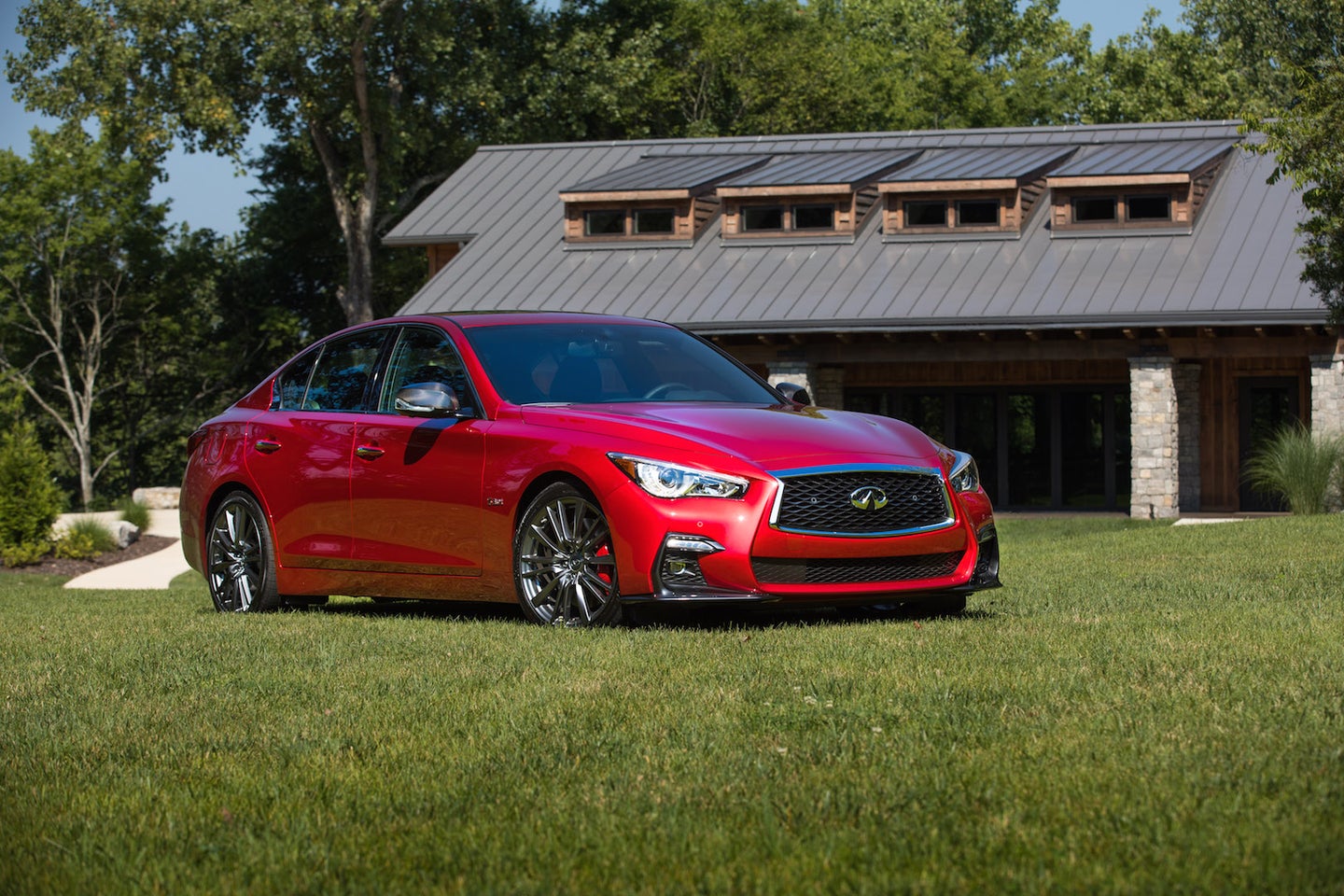 The 2018 Infiniti Q50 Red Sport 400 is a heavy car at 3,744 pounds, but not nearly as pendulous as that name. And while the Japanese have a glorious history of grandiose car names—see the domestic market Toyota Crown Majesta 10th Anniversary Type C or Isuzu Statesman de Ville—the string of words attached to Infiniti’s 400-horsepower sedan seems like it was borrowed from a second-tier Tennessee stock-car race instead of Japan’s history of overwrought nomenclature.

But maybe the connotation isn’t accidental: Maybe the Coca-Cola Pepsodent Marlboro Kotex Infiniti Q50 Red Sport Series 400 by Dr. Scholls is perfectly named. Because after driving the car, it seems to me it would make a great moonshine runner—the V8 saloons that first populated early stock-car races in the late 1940s.

Blame Infiniti for the comparison. They took me to the pristine Leiper’s Fork Distillery, in Franklin, Tennessee, and sowed the (barley) seed. Plus, the landscape around the company’s headquarters where we tested the car looked—at least to my Yankee eyes—little different than those found in Wilkes County, North Carolina, home of American stock-car racing. Sitting 300 miles east, it’s the region drivers honed their craft in souped-up Fords, Plymouths, and Pontiacs, staying just beyond the reach of local police and federal revenue agents. Crucially, despite engine and chassis modifications, the exterior of the cars had to remain mostly stock to avoid undue attention.

Undue attention is coincidentally what’s required to spot the differences in the updated 2018 Infiniti Q50 Red Sport 400. They include fascias, LED taillights, interior trim, and some exhaust pipe detailing. Unchanged is the 400-horsepower “VR” V6, different from the 300-horsepower version in the 3.0T Sport mostly in the tune of its turbos. (There is a slightly larger intercooler, too.)

Below the skin are more changes, with this trim level receiving a thicker sway bar, higher drive ratio and quicker steering, larger brakes and model-specific black headliner (sportif!). For when the ardor cools—or the runner runs out of patience with dark back roads—the Red Sport 400 offers Infiniti’s full suite of driver aids. That includes all the regular suspects to control following distance, prevent accidental lane departure and illuminate blindspots. They work well, though the Active Lane Control system falls into the common trap of hugging the right side of the lane—less than ideal if you’re trying to drive by Tennessee’s finest without looking like you’ve dipped into your 100-proof cargo.

On the tech side is DAS, or Direct Adaptive Steering, a steer-by-wire system that allows for dozens of variations on steering heft, speed and feel. It’s a superior system to the standard electronic rack following this year’s updates—accurate if a little dead on-center, and heavy in Sport+ settings—but it’s not great. Infiniti is transparent in admitting that the system is a component of an as-yet-unrealized autonomous driving system.

But right now, it’s a chunk of a creature arriving piecemeal from the future, to be animated only after all the parts are consolidated. Until then, why do we have to babysit an insensate arm?

The interior is only available in Very Serious Black, with [R/r]ed stitching. Materials and constructions are solid, but they pale against what Audi and Mercedes offer in equivalent cars. The screens in the center stack, particularly, seem a generation old, and are frustrating to engage with—the last time you swiped so angrily, it was leftward over your ex’s face on Tinder. On the 2018 car, the paddle shifters have been moved to the wheel from the column; a product planner noted that with DAS, steering is quick enough that during dynamic driving the wheel will never be rotated far enough to swap the positions of the paddles.

Seats lack the concavity necessary to keep the driver planted during the G forces the car can muster, but the new-for-2018 steering wheel is beautifully shaped, making a stable partner in tight turns. A high point is the 16-speaker sound system from Bose’s Performance Series, whose aluminum speaker grilles wash passengers in crisp, powerful sound. NPR's Jacob Goldstein, detailing the rumors that FDR’s travelled to Warm Springs, Georgia, to buy the region’s moonshine during Prohibition, sounded great.

With Jacob murmuring about Stump Juice—named for its hiding place—I followed 10 other Red Sport 400s away from a downtown Nashville hotel and into the countryside. From the first onramp, the car’s power was overwhelming. I whooped. There’s a whiff of turbo lag, but sometimes, the particular one-two of turbocharged power delivery makes a car feel even faster, and isn’t feel ultimately the point? (For the number-crunchers, the Red Sport 400 gets to 60 in 4.5 seconds.) The ride is buttoned down and firm on 19-inch wheels, with more road imperfections felt through the seats—if not the electric steering wheel—than one might expect on smooth Tennessee highways. (Any glass bottles in the trunk would rattle, but not break.) The car feels lurid but capable, able to indulge in a slide—thanks, gravel-strewn back roads of the Harpeth River Valley—and extricate itself without too much drama. It’s a bruiser.

That’s why, if some 21st-century Prohibition were to pass, I’d choose the Q50 Red Sport 400 to get my product to market. It’s fast and a little crude, with the necessarily anodyne styling. (The G35’s cockeyed distinctiveness is long gone.) It lacks the finesse of the BMW 340i or Audi S4—Infiniti still seems unwilling to indulge the gargantuan R&D budgets the Germans do—but is more rambunctious for it. It’s less sober, as it were, and more ready to shimmy. The only transmission is a 7-speed auto that responds belatedly to manual shifts, but is plenty aggressive when left its own machinations. And hey, that’s one free hand for operating a Tommy Gun, should the need arise.

And again, there’s the power. I imagine the sensation of being firmly smooshed into Red Sport 400-patterned leather is akin to that of the cow who, just before giving up its life in service of T-bones and auto upholstery, saunters into one of Temple Grandin’s calming squeeze-chutes. That soothing pressure might come in handy, were you to be driving extra-legally with a trunk full of contraband on a Tennessee two-lane with shoulders the width of a Ticonderoga HB, feeling just as close to death as the cow.

Prices for rear-wheel drive Red Sport 400s start at $51,000, or all-wheel drive for $2000 more. On paper, the Infiniti isn’t the value proposition it once was, until you consider that a Red Sport 400 comes standard with options that can cost $10,000 from the German trio. In the American corner, the Cadillac ATS-V and CTS V-Sport are widely available for under $60,000, and offer comparable performance. Still, the Infiniti offers a more advanced suite of active safety features, a nicer interior and a subtler shape. Plus, you never know—a salesperson might accept hooch in lieu of cash some months when the lease comes due.

Final note: Should you seek a little attention, spring for one of Infiniti’s three optional, dealer-installed sport exhausts. The standard pipes are quiet, and feel out of sync with the car’s boisterous personality. Remember how the old G35 sounded like a cut-rate Porsche boxer six? Let’s get back to that.