Infiniti gives the Q60 everything they've got. Is it enough? 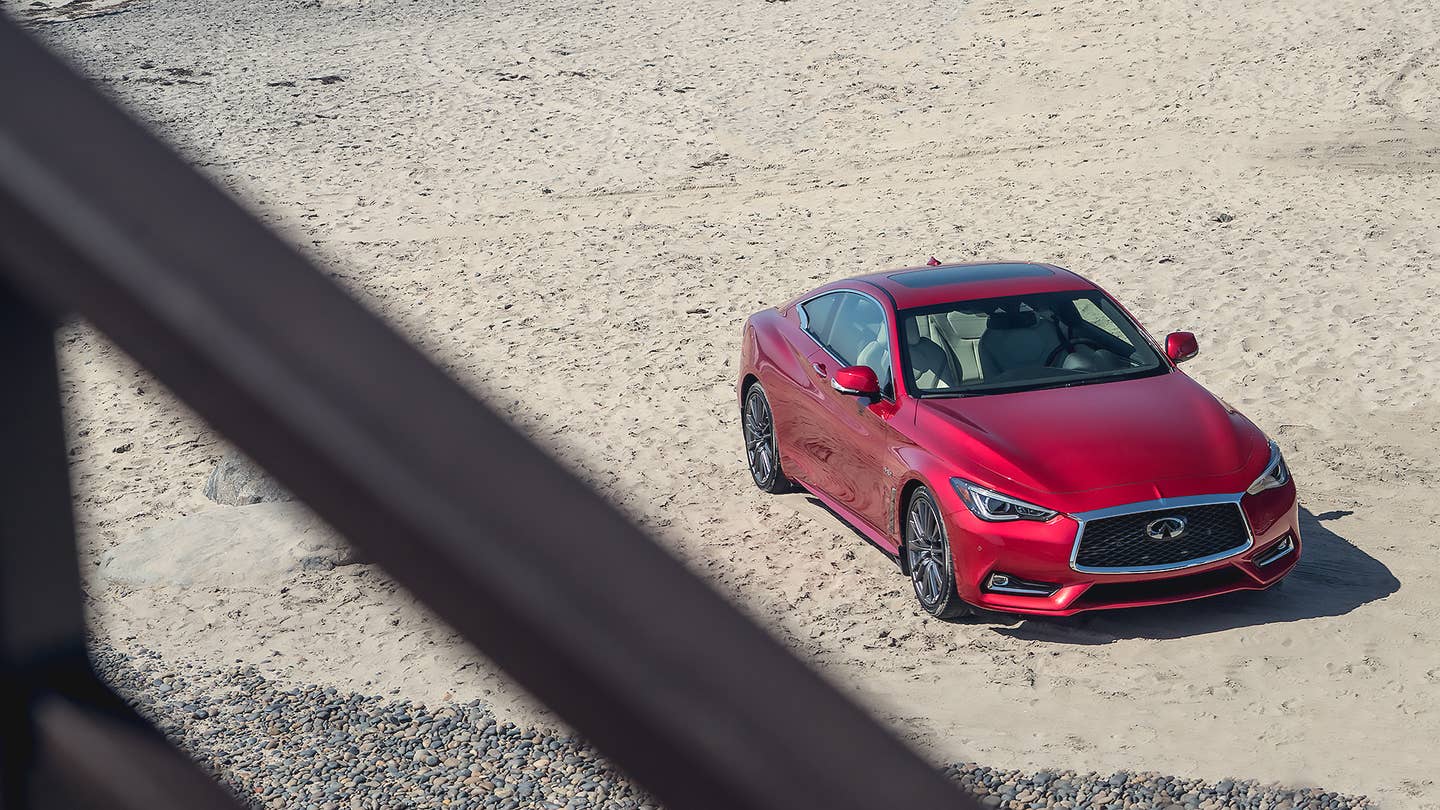 Infiniti’s Q60 knows how to fill a room. The new coupe was a big and steady presence under fluorescent house lights while we worked around it; setting massive 5-kilowatt lights on their stands, flooding the room with heat, sculpting its curves and shoulders. It’s a rare thing, getting to know every inch of a car before its debut. Before anyone else, really. Bending light around it, making diveably-deep red paint glow under incandescent bulbs. Using photography not just to point out that the car was handsome, but why. And we’ve wanted to drive it ever since.

After all the hard work, we should have just rolled it out of the studio and into the sun. Sitting in the open, with a blue sky at its back and tarmac under its wheels, reflected horizons dip and flow over the Q60’s sheet metal marvelously. Written into the those lines is something very appealing. A kind of selfishness that only gets more enticing as our roads clog with SUV’s and cheapness and indifference.

Tick every option and you get a car called the 2017 Infiniti Q60 Red Sport 400 – the car we drove at Infiniti’s launch, near San Diego. Those ticked boxes buy Direct Adaptive Steering, Dynamic Digital Suspension, top-notch driver assistance technologies that cover the car with radars and cameras, and a brilliant Bose sound system that covers the interior in speakers. You’ll get a 400-hp engine up front, called the VR30 DDTT V6 Twin Turbo, and to control it all, you’ll get a cockpit covered in more than 60 buttons, two fairly dated touch screens, and a steering wheel that feeds all of your input to the steering rack electronically, like a video game.

All this hard work in technology and design is being purchased by a tiny sliver of the American automotive market. Reporting from Automotive News, based on numbers from an IHS Automotive analyst, has coupe sales at 2.6 percent of new-vehicle registrations. And competing in this segment? BMW’s 4-series, the Mercedes C-Class, and Audi’s A5. How is this possible? Coupe’s require a massive investment in new design. Which means new body panels, new glass, and expensive new crash tests. For all that you get a car inarguably less practical than the sedan that it’s based on. A coupe is an indulgence. But for whom?

Highway 79 ducks and weaves through country so inhospitable, so dry and tough, that the military trains pilots in escape and survival techniques there. It suits the Infiniti Q60 though. Long, straight sections give ample opportunity for the 3.0-liter V6 to stretch its turbocharged legs. The dynamic suspension, adjusting its damping constantly, keeps the car flat and fast in decreasing-radius sweepers.

It’s a funny kind of quiet charisma. The distinctive kazoo howl of the old VQ engine’s exhaust is gone, displaced by just a murmur of induction noise from the VR30. Road noise is imperceptible through the wheel, as the second-generation digital steering has removed your direct connection to the tires and made way for automation technologies and programmable steering ratios. Taken together, it’s all almost too serene. Too effortless. The performance of the Q60 isn’t eye-opening until you glance at the speedometer. That’s the only time you’ll realize the Infiniti Q60 Red Sport 400 is a very fast car indeed.

Few things suggest your indifference to the company or comfort of others like owning a coupe. That might be just the thing to explain how, in 2015, just 2.6 percent of new cars came equipped with sharper lines, and fewer doors. It’s a shame, when automakers put such an effort into the cars. Without a buyer all the technologies, the buttons, the gadgets, even the handsome lines amount to nothing more than excellence in pursuit of purpose.

Infiniti threw all their tricks at the Q60 Red Sport 400. They sculpted a remarkably attractive rear seat, and made it more attractive with a roofline so low, no grown person could sit comfortably in it. They engineered a car you can sling through corners with athletic ease, then equipped it with some of the best driver assistance technologies in the industry, so you don’t have to. It’s everything the increasingly indifferent modern sedan is, and everything it isn’t, and it's all in one place. The Q60 is a rare, selfish, good thing. And that ought to be more than enough.