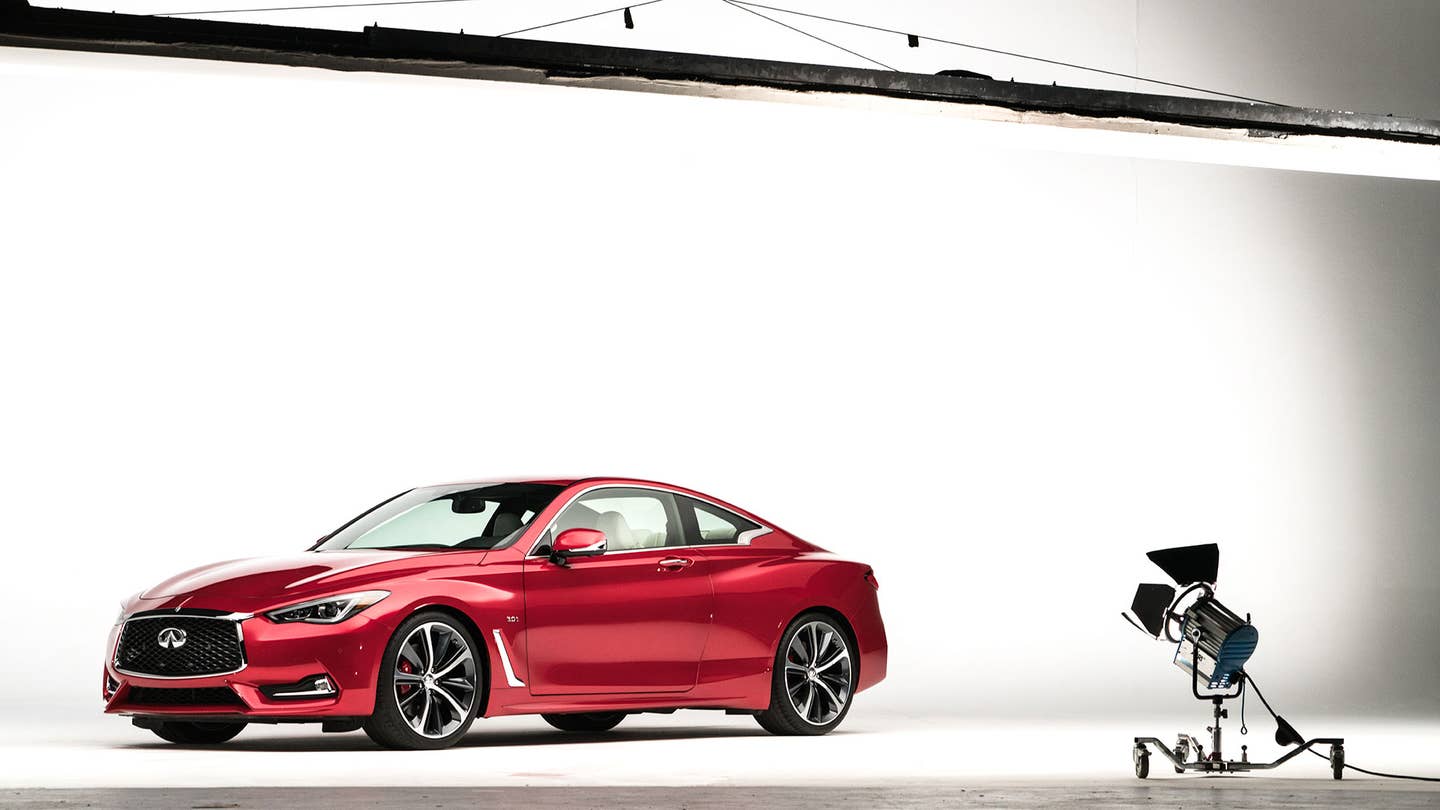 Three long, white walls, curved from floor to ceiling, corner to corner. That’s what was waiting in Long Beach. We call it a cove. It’s the mechanism that gives you those perfect product photos. With fresh paint and proper lighting, the effect is so smooth and even you can’t focus your eyes. Overhead, a giant white reflector, swinging subtly from chains and rails. And parked just off the studio floor, guarded and hidden under a thick custom car cover, my subject: Infiniti’s 2017 Q60S.

Charlie Sheen wanders through the studio, exchanges pleasantries and drinks our coffee. When he leaves, the cover comes off. The Q60S is all modern and saturated red, with an upright gaping family grill, high sills and bright metal accents that call out deeply sculpted doors. The handsome lines replace an aging, once-admired car of the same name. We’ve all only ever called it the G37. The car’s handler works his way around the sheet metal, plucking gaffer’s tape off identifying badges. “3.0.” “S.” Infiniti’s big logo.

More power, more efficiency, technology. Modernity. The spec sheet reveals as much about the intent of the Infiniti as anything. Overhead the dangling reflector bounces 15,000 watts of tungsten light over an open hood: 400 horsepower wrenched out of a twin-turbocharged 3.0-liter V6. That’s the attention grabber. The same VR30 engine that we recently called a 400-horsepower consolation prize. The Q60S will also hit the market with a 300-hp version of VR30, as well as a 208-hp inline-four. The little 2-liter promises 24 mpg, while the 300-hp V6 offers 23 to the gallon, and the raucous 400-hp motor offers a barely less impressive 22-mpg. Interesting, and easy, math. To get a hundred potential horsepower, you have to sacrifice a potential mile per gallon. What a world.

Reflectors on stands crowd the door. Another 5000 watts of light is warming the room, and still not enough. Deep bolsters, high sills and a slim turret of a window, the Q60S is a vault for light. Experience says the things that make a car interior difficult to photograph make nailing an apex (or parallel parking) a bear, but that’s a problem for another time. The back seats are more challenging. Active noise control won’t cancel the sound of mumbled curses. The re-tuned Direct Adaptive Steering goes untested, despite the wheel being repeatedly prodded by my buttocks.

The Q60S burbles to life and its handler rotates it 270 degrees. Glamour shots. The “Front Three-Quarter”, it’s the most important shot all day. The one you always see a photographer crawling around on the ground for. The long lenses come out. Polarizing lenses remove glare from windshields. The 5000-watt lights creak just a little as they get hot, and when they do they’re impossible to move without gloves. And they’re moved constantly. Shoot low enough and you don’t have to repaint the tire tracks across the studio floor, but the car looks best with the camera elevated. Maybe it’s the distinctive curve in the C-pillar. Maybe it’s just the way it sits over its new electronically adjustable suspension. Maybe I need a break.

The car’s guardian is a hero. He whitewashes the rootbeer-colored tire marks while I discover that the Infiniti looks best from where Charlie was standing, across the studio by the snacks, over the rim of a coffee cup.