At these prices, a shapely body and rowdy 400-horsepower V6 can't make up for a dearth of fun and refinement. 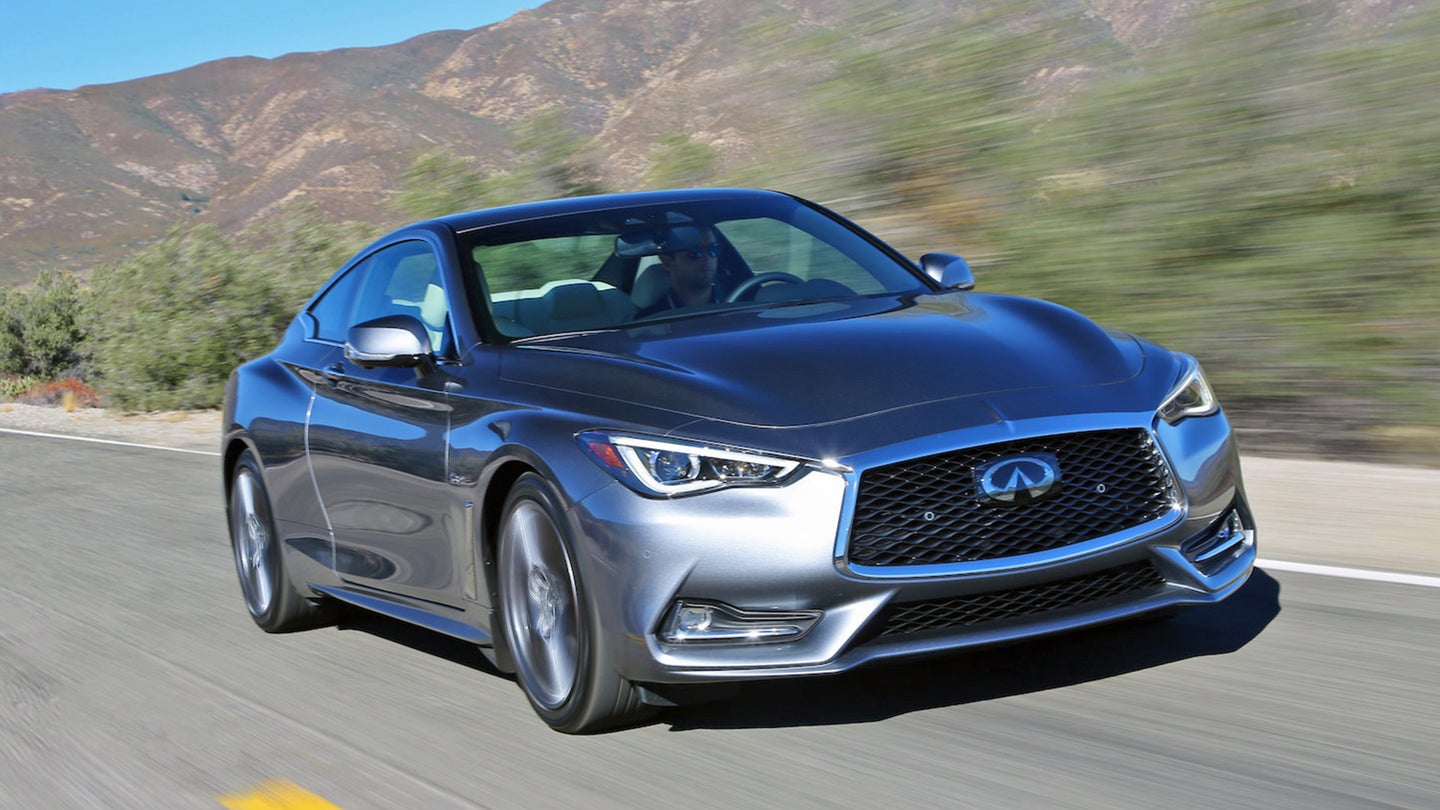 Back in 1981, when Nissan was still doing business as Datsun, Elvis Costello offered one of his reliably tart song lyrics: “Good manners and bad breath get you nowhere.” You’ll need a deep breath yourself to pronounce the name of Infiniti’s top-drawer sport coupe, the Q60 Red Sport 400 AWD. And like Elvis’s lyric in “New Lace Sleeves,” the car is all about good intentions gone bad.

On paper and in person, the Infiniti looks the luxury-performance part, with distinctive, free-flowing bodywork and 400 horsepower from a twin-turbo, 3.0-liter V6. The race to 60 mph takes just 4.5 seconds, in the hunt with the Audi S5, BMW 440i, and Mercedes-AMG C43. What could go wrong?

A lot, apparently. This otherwise-well-mannered Infiniti's showroom halitosis includes a lack of handling refinement, ergonomic and aesthetic hiccups, and a general shortage of fun. Add a price that starts from $55,895 in rear-drive guise, and reached $64,930 for my near-loaded AWD model, and the Infiniti finds itself outgunned and outclassed by the best of the two-door crew.

Since even I can’t keep Infiniti’s model names straight, I should note that the Q60 is a theoretical heir to the fondly-remembered G35 coupe, itself renamed “G37” in 2008 to denote a V6 that grew from 3.5 to 3.7 liters. Hailing from a more-innocent, affordable era of Japanese coupes, that original G35 was less deluxe than this Q60. But it had a charming, rowdy spirit (and an available manual transmission), something that’s been steadily leaching from successive generations of Infiniti sport coupes and sedans.

A shame, too, because this Q60 can hold its stylish head high alongside the German coupes, Lexus’s RC350, or a Ford Mustang GT, if you want to rope in the Motown brigade. Unlike some recent Japanese designs, the Infiniti is fashion-forward without coming off as garish or trendy. Power-lifters might approve of the long, ripped hood and beefy flanks. Those muscular forms are mediated by a more-sober, rising crease that underlines the window sills. Infiniti’s arched grille is large but tastefully wrought, even with its wavy-gravy plastic inserts. Park next to the self-effacing Audi coupe especially, but also the conservative C-Class or 4 Series, and don’t be surprised if the Infiniti draws the most eyeballs and compliments. Those visuals were enhanced on my tester by a candy-apple paint job, bright red brake calipers, and $2,280 worth of carbon-fiber trim for the exterior mirrors, fender vents, fog lamp surrounds and rear decklid spoiler.

Inside, it's a different story. As ever, it kills me how some car reviewers get so seduced by interior surfaces that they'll overlook even glaring flaws. Wrap some flashy leather around a dried-up husk, and they’ll proclaim the whole thing “stunning.” That word has actually been used to describe the Q60 interior, but unless they mean “stunningly dated,” we’re talking about two different cars. You know how people date trees by the rings in a cross-section of wood? The Infiniti’s interior is like that, with entire epochs of Nissan and Infiniti on display in a disjointed manner that speaks to cost savings and expediency rather than a genuine commitment to luxury design.

To Infiniti’s credit, the Red Sport’s stitched-leather seats are quite good, with body-friendly forms and soft, semi-aniline hides. Optional “Silver Optic” carbon-fiber interior trim is a bit sparkly-Barbie for me, but some of my passengers really liked it. And if you're more into Rocker Barbie, you can have black carbon-fiber instead—but only in combination with gray leather, versus red leather or my tester’s white.

But where German brands are battling for design-and-digital supremacy, including whiz-bang, reconfigurable TFT displays that cover huge vistas of dashboard space, the Infiniti’s interfaces and controls are comparatively drab and unsophisticated. I dig the old-school mechanical console shifter, a stubborn holdout against the electronic units that dominate today's luxury scene. But workaday driver’s gauges, with their plasticky outer rings, would look right at home in a Nissan Rogue or Altima. Nissan/Infiniti’s aged navigation unit—with fuzzy resolution and dreary graphics—rests atop a newer climate/audio touchscreen as jarringly as a high-def TV bolted to your grandpa’s dusty Magnavox. Climate control switches append to the center stack like awkward retrofits. As though it weren't all random-looking enough, the upper touchscreen has a rotary console controller that plays like an afterthought.

Glitchy seat heater buttons on my tester required four or five presses, at increasing levels of frustration, before they’d turn on or off. Those seat warmers are limited to a single level of toastiness, rather than the three levels found in even basic economy models. Seriously? And the standard Bose sound system pumps big wattage through 13 speakers, but the music itself sounds like it’s pumped through an aquarium filter. As with Buick, which also struggles in the purgatory between so-called “premium” cars—a more-meaningless term than ever—and genuine luxury, there’s one brand that Infiniti should look to for inspiration: Hyundai’s Genesis, whose high-value models manage to be both impressive and immersive in design, materials, ergonomics and fit-and-finish.

As for the Q60’s practicality, the back seat offers slightly less headroom and legroom than the German competition, especially the roomy Audi. In this class of coupe, every inch counts. The aerodynamic Infiniti does score for quietness, with little road or wind noise even at 80-mph-plus.

The Infiniti's calling card is its all-new 3.0-liter V6, code-named “VR” to differentiate it from the workhorse VQ engines that powered Infinitis for 25 years. The downsized twin-turbo six gets an integrated exhaust manifold and spray-coated, mirror-finished cylinder bores to reduce friction. An electric motor regulates intake valve timing for zestier throttle response.

Nissan says the engine’s boost-happy turbochargers spin at up to 240,000 rpm in transient conditions, and 220,000 in steady-state operation. The VR six (as opposed to this VR6) is a winner, with negligible turbo lag and a husky bark that recalls an old-school, naturally-aspirated engine. Even with nearly 3,900 pounds to tow, the VR engine pulls like the dickens, with 395 pound-feet of torque that starts to peak at 1,600 rpm and holds flat ‘til 5,200 rpm. There’s some coarseness around redline, but less mechanical racket than older, larger-displacement Infiniti sixes. Infiniti's seven-speed paddle-shifted automatic transmission is improved, including a new, automated rev-matching function, but it’s still not as fleet or seamless as the eight- or nine-speed gearboxes from the German brigade. Unsurprisingly, you can’t get a stick.

More distressingly, the lusty engine is let down by indifferent steering and handling that throws a soggy blanket on the fun. This Q60 can still take corners at great haste, generating confident grip (about 0.90 g worth) through 20-inch alloys and summer performance tires. But the harder you push, the more things go haywire, from rear-end bobbles to steering that always feels a few beats behind. I’ll underline that this wasn’t even with Infiniti’s much-maligned “Direct Adaptive Steering.” That optional, steer-by-wire unit severs the physical connection between the steering wheel and front wheels, with electric motors translating your commands into cornering action. But even the Q60’s conventional, electric-assisted steering has a big slack spot at its center; at highway speeds, the Infiniti meandered in its lane and required regular tugs on the wheel to maintain a straight path.

The numb helm offers zero clues about the road surface or the buildup of lateral forces, and it doesn't always react predictably to inputs, leading to even more unwanted, mid-corner corrections. The steering was so off-putting that I assumed it was the icky drive-by-wire unit, until I checked the specs and realized it was just plain old electric steering. The Infiniti does offer myriad settings for its engine, adaptive dampers, steering, and transmission, but fiddle all you like—none of them appreciably heighten the sensations.

The sad, crazy part is how an automaker could get steering so wrong and brakes so right. Hey, Infiniti, maybe those respective engineers could just switch teams? The brakes, with their natty red calipers, are faultless, with strong initial bite and a beautiful, progressive range as you add or subtract pedal pressure.