Lincoln MKZ, Driven: Can 400 Horses Jog Lincoln From its Slumber? 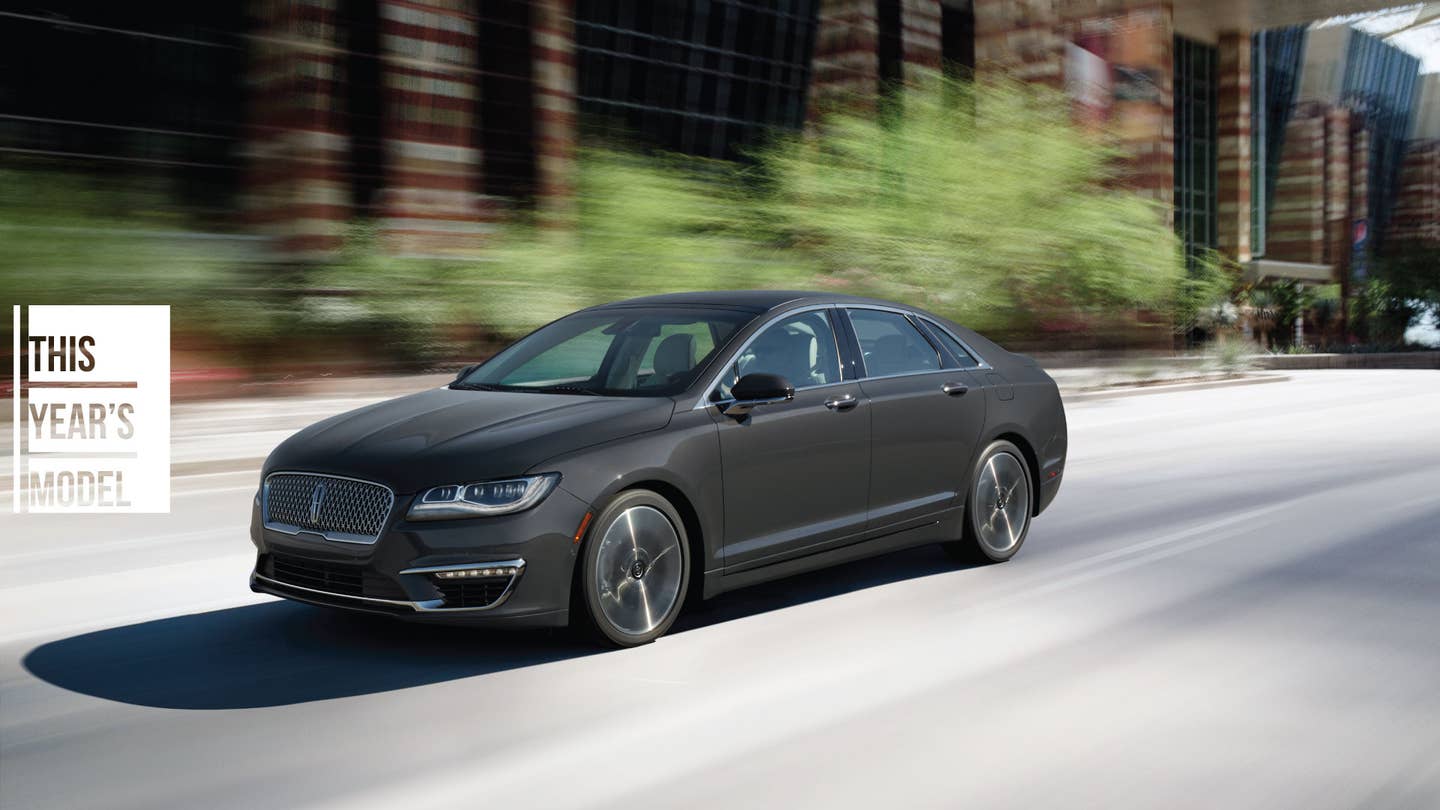 Driving a Lincoln in Detroit is like slipping into the Upside Down, the freaky alternate universe in Netflix’s breakout, retro-horror “Stranger Things.” (Detroit, if I may say of my old hometown, may be even more disorienting, and certainly stickier.) It starts at the airport, where I stand curbside awaiting the arrival of a Lincoln MKZ. Let me rephrase that: A 400-horsepower Lincoln sedan. Do I have your attention now?

A showroom-new MKC crossover rolls past, and for an instant I thought Lincoln brought me the wrong car. Seconds later, a larger Lincoln MKX crossover pulls up behind the MKC. Then, departing the airport soon after in the wide-berth seat of a ruby-red MKZ 3.0T AWD, I spot my first all-new 2017 Continental in the wild, and the black Conti is impressive on the street. (Check back soon for our take on Lincoln’s flagship sedan.)

Damn, I think: Fifteen minutes in Detroit, and I’ve seen three more Lincolns than I’d spot in a full day in Manhattan (black Town Cars excluded). Lincoln’s parent company, Ford, practically owns Dearborn, the town perched between the airport and downtown Detroit in which the Blue Oval has its headquarters. And every time I come home, I’m struck by this daunting challenge for Lincoln and Cadillac and Corvette: Luxury and sports cars that proliferate in Detroit—or Chicago, or St. Louis—can seem like virtual unicorns on the west and east coasts, where everyone seems to drive a BMW, Audi, or Benz.

The 2017 MKZ isn’t about to change that. But this refreshed version of the Ford Fusion-based sedan does show some signs of life at Lincoln, a brand that I’ve largely written off, having grown tired of being fooled by cars and Ford executives that seem to be vying for some insincerity award. Compared to those serial sweet-talkers, who continue to insist that Lincoln’s rebirth is just around the corner, its gnomic pitchman Matthew McConaughey is the voice of clarity and reason.

As its first peace offering, the MKZ ditches Lincoln’s split-wing grille for a dignified corporate oval that instantly recalls former Ford vassal, Jaguar. Derivative or not, it’s miles better than the baleen-whale face that Lincoln used to show the world. (The only thing missing was a hunk of kelp in those metal braces.) The second offering is some ability to disturb the peace via a new, twin-turbocharged, 3.0-liter V6 with 400 horsepower and 400 pound-feet of AWD torque (detuned 350 horses and 400 pound-feet for front-drive versions). Don’t call this optional V6 an Ecoboost, because that’s a Ford thing. Lincoln swears it’s keeping the engine for its ownself, so you won’t be seeing a twin-turbo, 400-hp Mustang—as intriguing as that sounds—any time soon. But the engine is smooth and forceful enough to let any Lincoln hold its head high in luxury society. For the MKZ, my seat-of-pants suggests a 0-60 mph sprint in the mid five-second range.

Punching my way onto a crowded I-94, the Lincoln proved a pleasant steed for Detroit, where 80 mph on the freeway qualifies you for the slow lane at best.

The MKZ won’t be making peace with Donald Trump, since it’s built in Hermosillo, Mexico, alongside the Fusion. But since Trump is probably unaware that a relatively yuge Lincoln is built south of the border, or that Lincoln even belongs to Ford, mums the word. (Detroiters and the United Auto Workers remain fully aware that the Continental and Mustang are being built in a downriver Detroit suburb, with Dearborn churning out the best-selling F-150 and a smaller Ranger pickup coming to replace small-car production that will also move to Mexico, meaning no net loss of jobs.)

What the MKZ doesn’t get is the stand-alone platform that might better its chances with buyers of German luxury cars, or Hyundai’s Genesis. In Lincoln’s defense, you can also cite Audi, Lexus, Acura, Infiniti, Cadillac, and Volvo among the luxury or near-luxury brands that have modified mainstream front-drivers into front- or AWD luxury cars—some to huge sales and acclaim.

Aside from the new face, the MKZ benefits from noticeable cabin enrichment, including Ford’s smartly improved Sync3 infotainment unit. (Say goodbye to Microsoft-based Sync and MyFord Touch, or give it one last punch in its obtuse nose, as Ford chief executive Mark Fields may have done.)

Lincoln’s pushbutton transmission remains, with switches for “Park,” “Drive,” and the like set in a vertical row along the dashboard. But the MKZ trades its unloved, flush-mounted climate control sliders for finger-friendly analog switches. Despite the upgrades, including a new aluminum wrapper, the center stack remains hectic and dated by modern standards, especially its scattershot array of buttons.

And if you’re thinking the twin-turbo MKZ is the penthouse version of that old blue-collar special, the Ford Taurus SHO, you’d best hold that thought. My test model’s optional Driver’s Package—available only on the 3.0T AWD—looked to spice up handling with a torque-vectoring rear differential that shares components with the rally-style, 350-hp Focus RS hatchback. That package also adds a slightly firmer adaptive suspension, with surface treatments like a dark grille, black brake calipers, ebony-and-white interior, multi-adjustable front seats and, somewhat incongruously, a carbon-fiber interior trim. But despite the Lincoln’s ability to name-drop that feistiest of Focuses, the spice was as subtle as supermarket salsa.

This MKZ feels comfortable and competent in any situation, including when I sliced through nighttime bends along the Clinton River near Michigan’s Lake St. Clair. It’s seriously quick compared with the standard 245-horsepower turbo four-cylinder version and a veritable bullet versus the dawdling, 188-hp MKZ Hybrid. But Lincoln’s “Quiet Luxury” mantra tends to shush the proceedings, prizing comfort over agility and driver feedback. The six-speed automatic transmission is reasonable yet rote; the steering accurate but uninvolving. And no amount of luxury-salon tint can completely disguise the Lincoln’s front-drive Fusion roots—whether it’s the stubby dash-to-axle ratio, the billiard-table expanse of dashboard top, or the way the MKZ’s front end pushes wide and understeers when you’re playing crack-the-whip through fast corners.

So what are we talking? A front-drive MKZ starts from $36,095 with the 245-horsepower four-cylinder it shares with the Fusion. The MKZ Hybrid starts from the same price, with an EPA-rated 40 mpg in combined city and highway driving. MKZ Reserve status will cost you $40,595, or $43,250 for an AWD model. The 3.0-liter engine adds a $4,000 premium, and things can get crazy from there. Larded with about $17,000 in options, including Technology, Luxury, and Driver Sport packages and a moonroof, my MKZ Reserve AWD reached $58,655.

Stranger Things, indeed: If you see anyone paying close to sixty grand for a Fusion-based Lincoln, the Demigorgon will surely be close behind. Hell, the 2017 Continental—all-new, roomier, and swankier throughout—can be had well-equipped for around $56,000, and for roughly $66,000 in Lincoln’s top-shelf Black Label trim.

Consider this MKZ a placeholder, newly arranged, that helps set the table for the breathtaking, comeback-sparking Lincolns to come. At least, that’s what Mark Fields is telling us.

The Lincoln Continental is Affordable And The Mercedes-Benz G-500 is Not: The Evening Rush

Plus, cargo shorts that actually look good, and some top-notch beer from Yonkers Brewing Co.