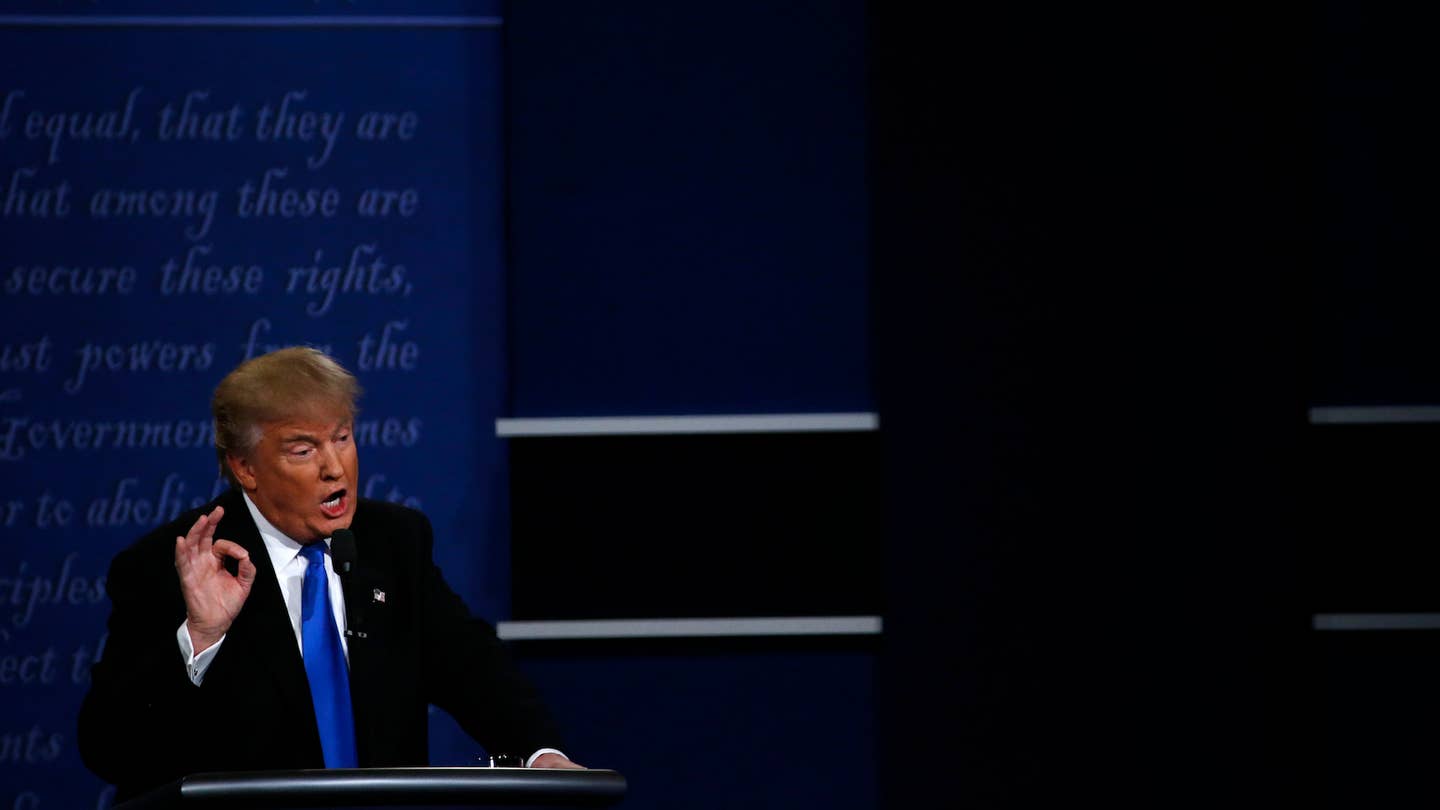 It came off as one of Donald Trump’s strongest moments in this Super Bowl of presidential debates: chiding Hilary Clinton for favoring trade agreements that Trump blamed for an exodus of jobs to Mexico, including auto jobs in Detroit.

“So we’re losing our good jobs, so many of them,” Trump said in his opening salvo at New York’s Hofstra University. “The companies are leaving. I could name, I mean, there are thousands of them,” he added, but ended up naming two: Carrier, the air-conditioning manufacturer; and Ford, America’s second-largest automaker, which posted $8.5 billion in net profit over the past year.

“So Ford is leaving. You see that, their small car division leaving. Thousands of jobs leaving Michigan, leaving Ohio. They’re all leaving. And we can’t allow it to happen anymore.”

As the antagonistic 90-minute debate waged on, the Republican nominee steadily ran out of material and fell back on his near-lovable stream of bluster, braggadocio, and rambling: Cyber, ISIS, living in hell, beautiful properties, Rosie O’Donnell, ask Sean Hannity.

But Clinton herself failed to correct Trump’s truth-twisting on Ford, or clarify what’s really happening in the auto industry, saving her best counterpunching for later in the debate. So in the interest of fact-checking after the fact, allow this former Detroiter and factory worker to weigh in.

Trump was correct that Ford, in a long expected move, will shift small-car production to Mexico, where they already build the Fiesta subcompact, Fusion sedan, and Lincoln MKZ. In line with such automakers as GM, Volkswagen, and Toyota, Ford plans to open a new, $1.6 billion plant in the state of San Luis Potosi, its first new North American plant in nearly 30 years.

What Trump failed to mention was that switching Ford Focus production from Michigan to Mexico won’t cost a single American autoworker their job. The Michigan Assembly Plant will build two new vehicles instead, including a Ford Ranger pickup beginning in 2018. Even the United Auto Workers, which loves jobs in Mexico the way an ulcer sufferer loves jalapeños, took pains to point this out.

Ford itself was waiting in the Twitter weeds during the debate, clearly aware that Trump might play fast and loose to score political points. The company tweeted that it had created nearly 28,000 jobs in America over the past five years, and invested $12 billion in U.S. plants. Ford CEO Mark Fields has been making the rounds of television and press to correct falsehoods about Ford. The company noted that it still builds more cars in here than any automaker, and employs the most workers, with 85,000.

Here’s the deal: Every car company struggles to squeeze profits from small cars built in America. For decades, the Big Three actually sold small cars at a loss, using them to meet corporate fuel-economy targets and hang onto market share. Even mighty Toyota, which built Corollas in California until 2011, will open a $1 billion Mexico plant to churn out that car, already the most popular model in world history with more than 40 million sold.

And between giveaway gas prices and the booming popularity of high-profit pickups and SUVs, every company from Ford to Mercedes-Benz to Hyundai is ramping up SUV production here to take advantage while they can. That’s what Ford is doing, too: Focus out, Ranger in. It’s the shell game of global automotive production, and everyone plays. Is that irritating at times? You bet.

When I still lived in Detroit, I used to chafe at GM, Ford, and their south-of-the-border Maquiladoras. Those are the plants, sprung to life by the North American Free Trade Agreement (NAFTA) where American auto companies were freed to import raw materials duty-free, assemble automobiles with discount labor, then ship them back to America for tariff-free sale. The ultimate effects of NAFTA continue to spark debate and PhD theses in business schools; who won and who lost, whether jobs were ultimately created or destroyed. There’s no doubt that manufacturing jobs in the Rust Belt have hollowing out, but that process began long before anyone heard of NAFTA. Many economists say that any jobs shifted to Mexico would have disappeared anyway, to China and other low-cost countries.

To his credit, Trump supported the auto industry bailout begun under President George W. Bush and continued by President Obama. But this isn’t the first time he has used the auto industry to whip up his nationalist base, made up largely of white and working-class men with high-school degrees. A few years ago, Trump helped Mitt Romney peddle the fiction that Jeep was abandoning the Midwest to build cars in China. In fact, Jeep’s plan was to build cars there strictly for the Chinese market, not for sale in the U.S.—as required by Chinese law for any automaker who wants to do business there.

Asked by moderator Lester Holt to specify how he would prevent the erosion of American jobs, Trump again argued that he would tax or place tariffs on Mexican-built cars imported for American buyers. As my colleague David Kiley says, good luck with that.

But what really bugged me about Trump’s grandstanding was its disingenuous nature. From a businessman who’s made a career of playing the ruthless “Art of the Deal” businessman, Trump’s defense of factory jobs and homegrown labor falls particularly flat. This is a man who hired undocumented Polish workers off the books to demolish the old Bonwit Teller in Manhattan, withheld no social security taxes, then stiffed them on their already paltry pay.

This is a real estate developer who played every loophole to take $885 million in tax breaks on his New York projects alone.

Even during the debate, chided by his opponent for having rooted for the housing collapse so that he could buy up real estate on the cheap, Trump interrupted Clinton to say “That’s called business.”

Apparently, when the auto industry engages in that brand of smart business—making hay on high-margin, hot-selling trucks and SUV’s in American factories, accepting tax breaks, and switching money-losing small car production to international outposts—Trump brands it as a crisis or downright un-American. But as even the United Auto Workers has come to accept, the best way to defend American automotive jobs is to ensure healthy American car companies.

Like much of his pitch to Make America Great Again, Trump’s rah-rah over manufacturing invokes gauzy memories of the Good Old Days, a time when humming auto factories were the lifeblood of Michigan, Ohio, and other Midwestern states; a time when a single Detroit plant, Henry Ford’s Rouge, employed 100,000 men. But those days are over, and have been for a long time, and they’re never coming back.

That’s not to say that Detroit and its people can’t benefit from a successful auto industry. But the jobs Michigan needs to fight for aren’t in cobbling cars together. Those jobs require a college degree, not a union card and a father or uncle in the plant. They’re in design, engineering, technology, energy, sales and marketing, and associated services.

As I’ve often argued, the sooner Detroit realizes that auto factories aren’t the future, the better off my city will be. And that’s a story you won’t be hearing from Donald Trump.