Think of it as the E-Class’s after-hours persona—flashier, moodier, and bathed in a neon pink glow. 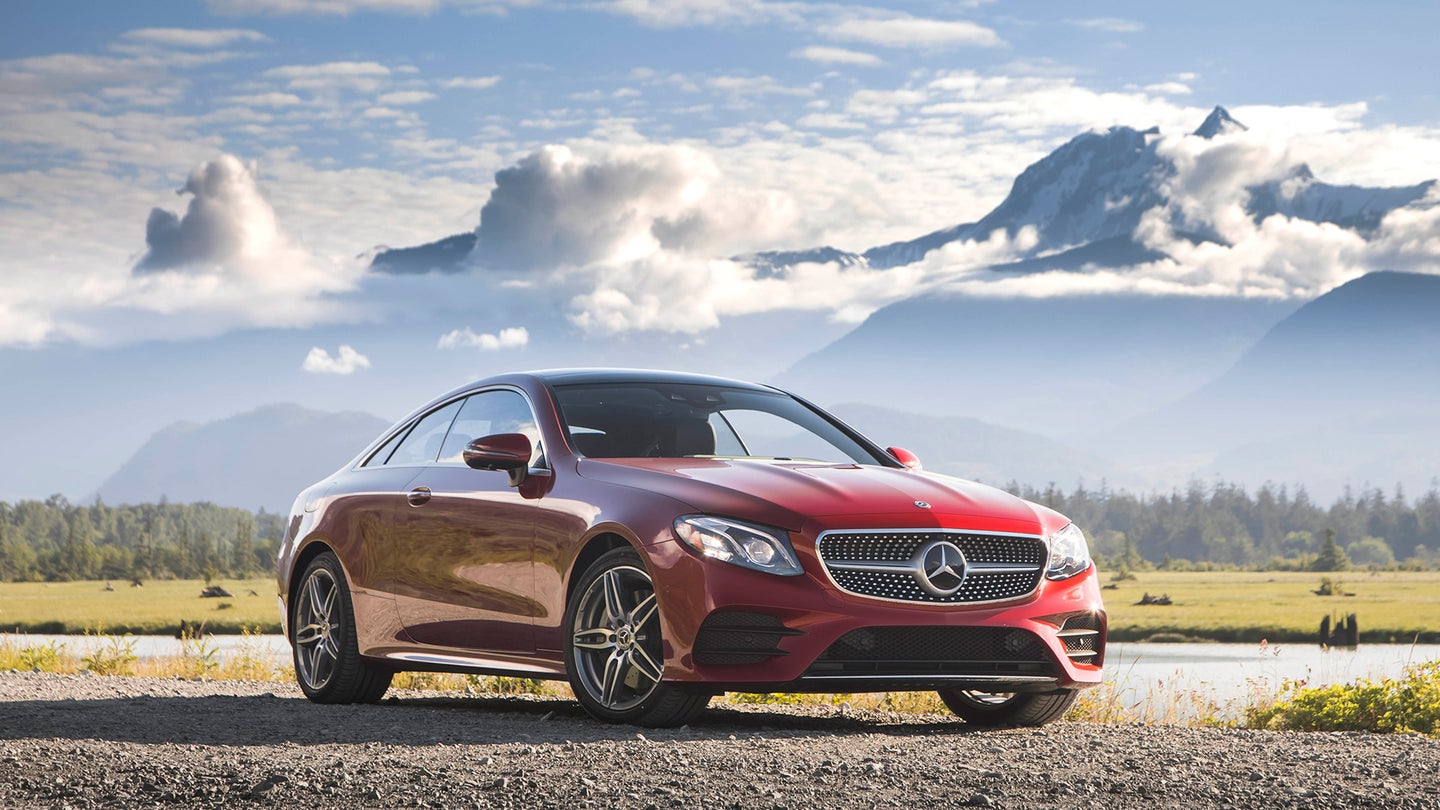 There’s a romance to convictions, even as fact knocks them flat. Do you think you’re above average in wit, beauty or taste? If so, you join around 70 percent of Americans who, despite statistical impossibility, feel part of some superior 51 percent. That’s a bunch of us mediocrities beaming, feet planted, hands on hips, proclaiming we’re special. It’s also that bunch of us buying size-medium coupes. Not little joys like the Mazda MX-5 RF, or whiz-bang icons like Acura’s new NSX, but medium-sized two-doors offered by companies from Toyota to Rolls-Royce alongside their near-identical sedans. I’m talking about the Toyota Solara, the Infiniti Q60, and today’s subject, the 2018 Mercedes-Benz E400 4Matic Coupe. With compromised functionality and inflated prices, what drives buyers into the less-than-spacious cabins of these two-doors?

Beauty, sure, though the aesthetic advantage of roofline manipulation is debatable—I’m looking at you, ‘98 Chevy Lumina coupe—and maybe a slight dynamic edge thanks to a shorter wheelbase and some jettisoned sheet metal. But really, in this particular class, consumers buy the racy version to illustrate that while they’ve chosen a popular model—Mercedes moves around 50,000 E-Classes annually in the U.S.—they’ve brought passion to the purchase. It shows they will deviate a lurid 30 percent from expected. Their accountant may have directed them to the Honda dealer, but a wanton libido led them to request the Civic coupe.

The question is: does the Mercedes E400 Coupe rise above that cloud of illusory nonconformity via Stuttgart’s reputation for superior engineering and design? Or, by chopping of half of its breadwinning sedan’s doors, did Mercedes produce a $90,000 Toyota Solara? To find out, I took this Benz to the streets of Los Angeles—a town whose residents, at a higher rate than anywhere else in the world, feel a nagging greatness lies within them.

The first part of the answer is positive: The Mercedes E400 coupe is beautiful, especially squatting amongst L.A.’s absurd, year-round bird-of-paradise blooms. Not perfect like the W124 300CE of old, but moving—and, in the parlance of the day, "thicc." [Look it up on Urban Dictionary if you dare. —Ed.] With a new platform that elevates its length, interior space, and presence over the old version—the previous two generations used a hacked up C-Class chassis—this is a coupe that transcends its origins. With $3,000 of AMG body kit propping up a mini-S-Coupe-booty in $1,080 of designo cardinal-red paint, the E400 looks every inch the welterweight waft-machine it is. The snub nose lends a boxer’s menace, while swagger arrives thanks to more glitzy trinkets than seems prudent. Walking up to the Benz, the headlights blink and swivel; the bullet grill sparkles, and tiny spotlights illuminate the ground.

Heft open a door to realize that the showmanship has just begun: The interior, as in the S-Class, can be illuminated in any of dozens of colors, which play across the two 12-plus inch screens, the $1,300 designo lined wood trim, and the robot sphincter air vents. This is a bruiser who’s won a couple purses. Decor aside, the difference between the sedan and coupe is elemental. Where the E-Class sedan shares its silhouette with many of Europe’s taxis, the coupe shares a shape with its S-Class cousin, whose connotations are much more Monaco than Frankfurt airport. Even the aforementioned heaviness of the doors—are wealthy retirees into CrossFit these days?—aids in creating a sense of occasion. Laboring to emerge from your low-slung two-door becomes a kind of humble-brag.

The drive itself is a little more of a mixed bag. The E coupe is currently offered only with the 3.0-liter turbocharged V6 shared with the sedan and wagon. An entry-level 2.0-liter is coming, as is an uprated, AMG-tuned E53, with a hotter inline-six. Mercedes has no plans to offer a full-strength V8 in the two-door. As such, the intention of this car seems more to cosset and cruise than to haul ass. Unfortunately—especially in L.A., where the vast majority of driving is done at under 30 mph—the coupe’s AMG-look equipment muddles things. This car's pitfall is potholes. Even at parking lot speeds, the large wheels and tight suspension crash over moderate-to-large bumps. It’s a rift in the serene nappa leather landscape of a car that otherwise feels as smooth and solid as anything that’s worn the three-pointed star. One solution is to make like they drive in haste: Officer, it’s not my fault—my suspension tuning rewards callous speeds! A better option would likely be to skip the AMG pack.

The E400 Coupe was happiest on L.A.’s freeways, at speed, at night. Pouring my blood clot-red car onto the Santa Monica freeway in the evening, things began to gel. The engine, which can tick blandly at idle, sounds throaty from three grand upwards; the suspension settles; the interior lights, turned to Donna Summer Album Font pink, were tacky and wonderful. Pulling up to a dive bar too beautiful by any non-L.A. standard to be a “dive bar” on West La Cienega, I couldn’t but notice the hue of the place’s neon sign matched the light bouncing off the interior's yacht-striped wood. Kismet or no, it gave me the courage to enter and drink, per my lending agreement with the manufacturer, one non-alcoholic beverage.

After sundown, the high cowl and low greenhouse that conspire to confine in parking garage-ticket-taking situations make the cabin feel like the cockpit every interior designer evokes in press briefings. Returning home after my virgin daiquiri, Mercedes-Benz’s full suite of driving aids happily kept the car smoothly bopping between zero and 70 mph as traffic ebbed and flowed. The coupe and its V6 encourage lusty on-ramp speeds in a way the four-cylinder E300 sedan’s engine does not. But then, provided you’ve checked enough boxes, the car’s sedate nature encourages you to flip on the driving aids—Drive Pilot, et. al.—and turn up the magnificent Burmeister stereo. The latter is a staggering $5,400 option, but one that had me convinced I could hear Cardi B’s press-on nails clicking against her mic on “Bodak Yellow.”

In the end, the combination of looks, performance, and just plain feel make the coupe well worth the money to any Mercedes buyer looking to specialize and indulge without cresting the $100K mark (or giving up a usable back seat). And though mine, in classic press car fashion, was splitting at the seams with a $90,000 MSRP thanks to $30,000 in options, the E400 coupe is best specced around $70,000. (90 grand is Porsche 911 money and, while the two coupes have vastly different M.O.s, no one wants the comparison to Porsche’s wunderkind.) Pick some lovely metallic paint, low-gloss wood and leather, Airmatic body control and the Premium 2 package, which adds the enormous 12.3-inch screen and some driver aids, and enjoy life in the sexier E-Class—one that’s harder to enter but, after a day of boulevard cruising and appreciative glances, difficult to leave behind.