Come for the four-door-coupe style. Stay for the dynamite hybrid inline-six. 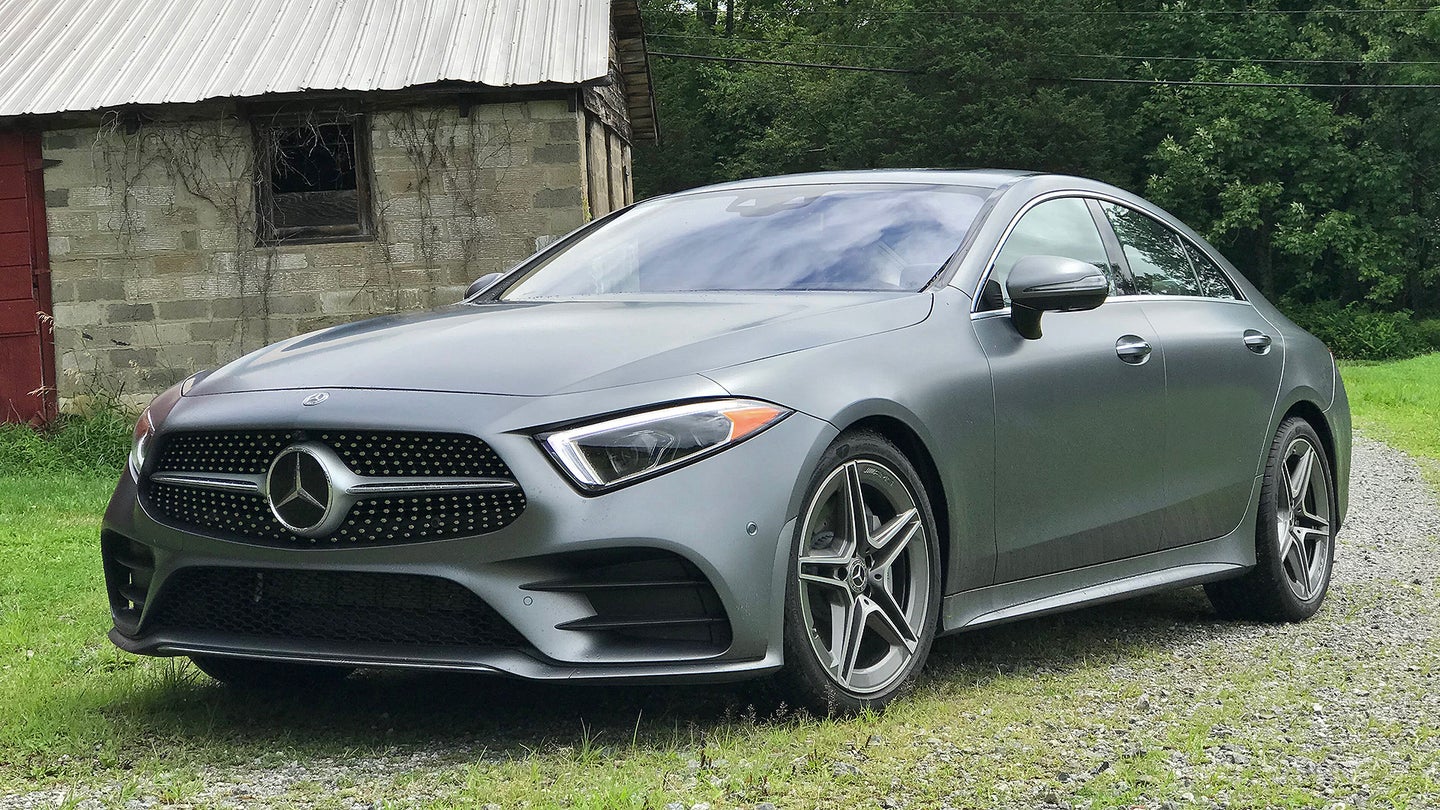 Once upon a time, I had a coworker who used a very specific word to describe cars with sleek, flowing lines: Swoopy. (Somehow, she always managed to say it in italics.) While she first dropped the term in reference to the now-defunct Hyundai Elantra coupe, the word always brought to mind another car: the first-generation Mercedes-Benz CLS-Class, which more or less created the now-ubiquitous "four-door coupe" trend when it hit the streets back in 2004.

While the second-gen CLS traded the sinuous, aquatic style of its predecessor for a wide-hipped, muscular body that brought to mind the likes of a toned CrossFit-alete—something about it always reminded me of Jessica Biel in Blade: Trinity—the third-generation model, set to land in U.S. dealerships later this fall, harkens more back towards the clean lines of that first CLS that seem almost heroin-chic compared to the toned sheetmetal of the second. Whether that's a positive or negative move is ultimately in the eye of the beholder; personally, my taste goes more towards Biel than Moss, but I won't argue that the 2019 CLS is one purdy car.

Regardless, the style you see here is poised to be the new look of Mercedes-Benz, the latest expression of chief designer Gordon Wagener's so-called "sensual purity" design language. The front end is a dead ringer for the new A-Class sedan, coming to America later this year; the rear calls to mind the bootylicious sheetmetal at the rear of the Mercedes-AMG GT sports car, which is sure to make differentiating between this car and the new AMG GT 4-door plenty difficult. The side profile, edgeless and smooth apart from the blunt nose, is streamlined as a .357 Magnum round—a comparison that seems doubly apt when the car is decked in the matte gray found on the tester I shepherded through New Jersey for a day. Overall, it's a look that certainly comes across as classy, even if it's a bit of a marked departure from both its forefather and the rest of the current Mercedes lineup.

Step inside, though, and the ambiance feels much more familiar. The CLS-Class, after all, is largely a twin of the E-Class once you dive beneath the skin; all it takes is one glance at the identical wheelbase lengths to figure that out. Not surprisingly, then, anyone lucky enough to spend time in the fancier versions of the regular midsize Mercedes-Benz sedan will find plenty to recognize inside the new sedan. Apart from the steering wheel purloined from the facelifted S-Class and the air vents that look like the maw of the sand monster that ate Boba Fett in Return of the Jedi, the CLS looks basically identical to the E, all the way down to the waterfall center console and the dual widescreen infotainment & dashboard display that looks as dark and imposing as the monolith from 2001 when the car is off.

Could you tell which of these pictures is of the E63 S and which is of the CLS450 if I hadn't given it away? Hell, can you tell anyway?

That's no slight against the CLS-Class, though; Mercedes-Benz's latest interiors are among the best in the business, and both CLS and E look every bit as expensive as their lofty pricetags and three-pointed stars would suggest. The latest version of the infotainment setup adds the ability to adjust the interior temperature through voice commands, on top of the other capabilities enabled by the central clickwheel-and-touchpad combo and the tiny touch-sensitive pads sitting inboard of 9 and 3 on the steering wheel. (No matter how you adjust the climate, though, the 64-color interior lighting briefly changes its shade to match, shifting red when you want it warmer and blue when you'd like it chillier.) The "Energizing Comfort" system, first implemented in the S-Class, seems as pointless as ever; its light-show-and-breeze programs ostensibly claim to recharge or relax the occupants, but wind up being little more than a distraction.

But going CLS over E does bring with it one noticeable packaging demerit: the back seat. Anyone considering a side hustle as a Lyft Lux Black driver (yes, that's what Lyft calls it these days) might want to think twice before buying this four-door coupe, as the rear is, shall we say, a mite inaccessible. Clambering through the tiny rear doors requires a bit more contortion than most dignified adults would probably like; once back there, legroom is decent (again, same wheelbase as the E-Class), but headroom is lacking to the point of definitive scalp-on-headliner contact. Still, the 2019 model can boast that it's the first CLS-Class with three-abreast seating in the stern, though the aggressive bolsters of the port and starboard positions mean that center spot is best reserved for short-trips and hurricane evacuations.

One would guess, therefore, that the CLS would drive much like the similarly-sized, similarly-suspended E-Class. But the four-door coupe has a surprise beneath the hood, one that stands above even its elegant lines as the primo reason it's worth buying over the E: Mercedes-Benz's new 3.0-liter twin-turbo inline-six, outfitted with what Daimler describes as the "integrated starter-generator"—a small electric motor mounted between the engine and the nine-speed automatic transmission. (It's the same engine found in the European S500 sedan, albeit in a lower state of tune.) In other words...the new CLS450, which will be the base model, is a hybrid.

But what a hybrid it is. While the electric motor doesn't add any top-line power past the inline-six's 362 horsepower and 369 pound-feet of torque, its 21 horses and 184 pound-feet are put to good use primarily filling in the power at launch and down low in the rev range, utterly erasing any turbo lag that might be hanging around. As a result, the inline-six feels delivers the sort of creamy, immediate power delivery that brings to mind a classic naturally-aspirated V8. More than once, pressing down on the throttle brought to mind the likes of the Corvette or Camaro SS...albeit connected to a far smoother transmission than the eight-speed automatic all too many of those Chevys are saddled with. All told, the powertrain is sufficient to propel the CLS450 from 0 to 60 miles per hour in 5.1 seconds, according to Mercedes; pop for 4Matic all-wheel-drive, and that claimed time drops to 4.8 seconds.

Of course, you won't be able to appreciate one of the engine's finer tricks if you're constantly caning it. Leave the drive control setting in Eco mode, and under the right circumstances—when your foot's off the gas, the wheels are pointed generally straight, the moon is full and aligned with the car's direction of travel—the engine will take a cat nap, shutting down entirely and letting the car coast in the sort of silence usually reserved for EV owners.

While Mercedes-Benz only served up CLS450 models during the initial U.S. drive event out of New York City, when the 2019 CLS goes on sale later this year, that model will be accompanied by a new CLS53 packing an AMG-massaged version of the new inline-six tuned to deliver 429 horses and 384 pound-feet. As one would expect from an AMG (even one of the newer half-caf six-cylinder models), the CLS53 will come with more aggressive styling and suspension tuning.  But it'll also be put into something of an odd spot in the rapidly-crowding AMG lineup; the same -53 engine is also bound for the E-Class sedan, the E-Class cabriolet, the E-Class coupe, and the awkwardly-named AMG GT 4-Door, potentially forcing buyers looking for a zippy midsized Mercedes to deal with a paradox of choice. (The AMG GT53, for what it's worth, will reportedly cost a good bit more than the CLS, putting some space between the two similar-looking models.)

Still, whether buyers opt for the relaxed CLS450 or the tightened-up CLS53, the basics will remain the same: Four doors, five seats, six cylinders (plus that handy-dandy integrated motor-generator), nine speeds, and a swoopy body all but devoid of sharp angles and hard creases.

There's one more number yet to be made clear: the price. Mercedes hasn't disclosed the MSRP yet, but based on the current model's price and the usual slight revision upwards that often occurs with an all-new model's arrival, the CLS450 will likely start around $75,000 when it goes on sale this fall. Sure, that'd be around $13K more than the E400, but the CLS-Class comes with a lot of standard features that are optional on the V6 E-Class, including 19-inch wheels, leather upholstery, and the larger 12.3-inch infotainment screen. And besides...style never comes cheap, right?