It’s been almost 40 years since the first Mercedes-Benz Geländewagen rolled off the assembly line at the Magna Steyr factory in Graz, Austria. Since then, many updates have materialized on the iconic G-Class's well-trod ladder-frame chassis: The G-Wagen's story grew to include air conditioning, differential locks, the Popemobile, V8 engines, V12 engines, supercharged AMGs, computer navigation, portal-axled giants, and even 99 copies of the glampiest thing imaginable—the $500,000 Mercedes-Maybach G650 Landaulet, made to haul your hunting falcons and bottles of '59 Dom Perignon across the world's worst terrain in ultimate luxury.

One change we haven’t seen in that time, though: An all-new model. Despite being continuously updated over the decades, nobody at Mercedes ever decided to sit down with a fresh sheet of paper—or, in the second half of its epic run, a blank computer screen—to try to, for example, dial out the horrifice worst wind noise at highway speeds, or make the ride a little less…militaristic. In some ways, you can’t blame Daimler for (not) trying. The G-Class isn’t a typical Merc, replete with luxury touches like piped-in cabin scents, serving the fickle demands of a wealthy clientele and subject to the ever-changing whims of modern automotive design. It’s an off-road vehicle above all else, the most utilitarian thing the company has ever made, all right angles and 0.55 coefficient of drag—beaten in its lousiness there by only the Hummer H2. It’s functional, iconic—and adored. It’s absolutely, indisputably special, and its first generation deserved every minute of its 40-year run. (Six-wheeled monstrosities aside, perhaps.)

But the time has come for a new version. After all, you can only cling to a Carter-era foundation for so long, particularly when you have an engineering bench as deep as the one in Stuttgart. Several months after Mercedes-Benz debuted the second-generation 2019 G-Class back in January at the Detroit Auto Show, The Drive has finally driven both the G550 and the souped-up AMG G63 in southern France—in fact, at the same off-road track, Château de Lastours near Carcassonne, that Mercedes used to test and debut the first model back in 1979. The new version can claim two key accomplishments: It updates the G-Wagen with a fresher look and modern engineering to both improve its already renowned off-road capability and make it ride silky smooth(ish) on the highway; and it does this without making so many design changes that it’s unrecognizable, and thus alienating the base of picky off-road fanatics who would utterly abandon the vehicle for something as minor as deleting the visible door hinges.

So those hinges remain, as do the old-school door handles—direct carryovers, actually—and even the sound the door makes when you slam it shut. It sounds awfully like the action of a Glock semiautomatic chambering a new round—which is now precisely the sound I want every car I own to make, even if it does take a few slams for noobs to get the door seated properly. Additionally, the doors are better sealed than before, allowing the wading depth to increase by four inches to 28, but they’ve retained the character of the original G to a T. Indeed, the style overall precisely echoes the original, with its severe cubist design and intensely vertical glazing, its bulbous indicator lights still perched atop the front fenders, its prominent Mercedes logo and grill up front, and the external spare tire on the back. Out there, the designers wisely placed the backup camera down below the tire, allowing it to provide a clear view of the terrain—useful when wriggling your way through boulder fields—in addition to the obstacles that are the camera’s primary reason for being.

Granted, the exterior surfaces and trim treatments are tighter and the materials more compatible—and the new LED headlights now come with a distinctive circular daytime-running-light halo—but it’s all still faithful to the G-Class ideal. Truth is, this is the only car in the Mercedes lineup that isn’t obligated to yield to the company’s strict design playbook at any given time. Rather, in classic brute-SUV Yakov Smirnoff fashion, playbook yields to G. That’s absolutely what you want in a vehicle expected to make not just survival, but domination—of the terrain, of the world’s imagination—its primary goal. Standing there processing the G-Class’s exterior in France, I laughed out loud when I remembered the line in the press material stating that the G-Class redesign “follows the philosophy of Sensual Purity.” Let’s be real: The only “philosophy” this car follows is the philosophy of not rolling over until it reaches a tilt angle of at least 35 degrees.

Okay, let’s cut to the chase: How’s the G handle off-road and on? Both of those answers begin with a seemingly minor mod to the G-Class’s dimensions, which are now about four inches longer and wider than the first-gen. In the world of automotive design, every inch counts, and these extra ones give it better stability in turns and steep, angled crawls off road—as well as a bit more of a commanding presence visually, and more room inside.

The most significant challenge for the engineers came up front, at the axle. The independent suspension and double-wishbone front axle, combined with a rigid rear axle, meshes both traditional ruggedness with the need for modernization. The double wishbone construction up from improves the agility of the electromechanical rack-and-pinion steering, particularly in low range. The axle also sits 6.0 millimeters higher than its predecessor's, improving ground clearance to 10 inches. The chassis continues to incorporate the ladder-style structure, which engineers decided was strongest and most appropriate for an off-road vehicle, as opposed to the structural-chassis designs that are now more common. That’s enhanced by a new strut tower brace in the front that increases torsional rigidity of that frame—also made possible by the new axle and suspension design.

Also carried over: full front, center, and rear differential locks, allowing the driver or computer to fine-tune the off-road performance based on the conditions or specific challenges. While scrambling around the many trails of Château de Lastours, we confronted everything from steep angled ascents to slippery gravel roads to slow crawls over rocks, each time benefitting from some lock combination in order to maintain traction. If manual mode seems too much to master, a new “G-Mode” automatically adapts the chassis damping, steering response, and gear selection to generate the most precise feel at the steering wheel and throttle, regardless of which other drive mode (Comfort, Sport, Individual, or Eco) the car is in.

On-road, the new G-Class is a 180-degree turn from its predecessor. Once rough and unbearably loud inside, it’s now smooth and comfortable. This, in part, is due to the same suspension enhancements that provide greater off-road prowess, which help smooth out the on-road feel. Further, the door and window seals have been improved, and wind noise reduced—though not eliminated to S-Class levels. The G-Class still possesses the aerodynamics of a brick, but that’s something that the designers chose not to change. Adding curves to the G-Class’s corners, after all—which is the key strategy for cutting wind noise—would also bring it closer and closer to its other SUV siblings, stylistically. As lovely as those cars are, it wouldn’t have been acceptable for a G-Class buyer. So the sharp edges—and the accompanying acoustic racket—remain.

More concessions to the modern customer, however, were made inside, with an optional new dash design that incorporates the same look and capabilities found in the new S-Class and E-Class sedans—a dual-LCD widescreen design where both screens are covered by a single strip of non-reflective glass, with virtual instrumentation and customizable designs. The off-road-specific display provides three-dimensional graphical representations of the car’s transfer case, drive shaft, and differential status, as well as information on altitude, gradient, incline, low-range gear, and steering angle. You also have a full modern complement of safety features, including active braking assist, lane-centering functionality, and automatic cruise control, among other Mercedes-caliber technology. Leather abounds throughout the interior, and materials have that typical Mercedes high-touch quality—but the beefy grab bar, positioned directly in front of the passenger seat, remains to remind users that they can, indeed, have some fun with this thing.

The new engine will be another reminder. The 4.0-liter V8 produces 422 horsepower and 449 pound-feet of torque, paired to the nine-speed 9G-Tronic automatic transmission—though it was modified for off-road use, with a wider range of gear ratios to accommodate lower engine speeds. There won’t be a diesel in the U.S., though one will likely come elsewhere.

This brings us, at long last, to the AMG variant. The G63 comes with its own version of the 4.0-liter twin-turbo V8 engine that places its twin-scroll turbochargers inside the “V” rather than outside for more efficient use of space, helping it produce 585 horsepower and 626 lb-ft of torque—which will rocket this towering hulk of a car to 60 miles per hour in just 4.5 seconds. The engine is more refined and robust than the G550’s, and the transmission faster-acting, too. In Sport Plus mode on the highway, it was easily able to keep up with the scattered Porsches in the midst of bombing runs toward the sea.

AMG models are as much about cosmetic upgrades as performance enhancement, so the G63 brings its own combinations of leather trims, gloss surfaces, carbon fiber accents, a unique grille up front, and flared fenders, among other tweaks. What’s interesting about the AMG G63, though, is its own philosophy, unique to its capabilities. Most AMG performance treatments are across-the-board upgrades, but the G63 actually dials down some of the G-Class's off-road functionality. For instance, in low range, the G550 will disable the anti-lock brakes 100 percent, but the G63 keeps it active in all conditions—and while it still offers the crawl gears, the AMG's ample torque makes low range unnecessary. The thinking there, according to Michael Rapp, a senior manager at Mercedes-AMG, is that purchasers of the AMG variant likely don’t do much off-roading, and therefore will have less knowledge about it. Thus, the G63 takes a few extra steps to help them get out of whatever messes they might get into. This includes additional modes that the G550 doesn’t have: Slippery, for on-road driving, and Sand, Trail, and Rock while off-road. Though those might seem like extra features, they’re actually present because AMG drivers will often need an extra bit of hand-holding while off-road.

In short, Rapp said, both cars are equally capable off-roaders, with the AMG’s overall performance enhancements delivering primarily on-road. So buyers keen on showing their rides some action need not fret if they don’t have the scratch for the upgrade to AMG. It’ll actually probably become a point of pride that G550 owners don’t have a “Slippery” mode in their models.

Another distinction of interest to enthusiasts at this point—though of no practical impact here in the U.S.—is that Mercedes will discontinue the production of the G-Class Professional variant, a stripped-down version with smaller engines, more practical interiors, and without any of the electronic off-road interventions that Daimler sells in other markets around the world . Mercedes will, for a time anyway, continue to manufacture the previous-generation models in these commercial and industrial trims, and on the same assembly line in Graz, no less—likely one of the only ones in the world to produce two generations of the same car on the same line. In fact, because the previous-generation vehicles take longer to manufacture, Magna Steyr has taken the innovative step of allowing the newer models to leapfrog the older ones on the assembly line via a crane system.

So while the G550 guys are sneering at the G63 guys for their “extra” features, the folks in proud possession of the Professional models will be gloating just as hard about the “extra time” that goes into their trucks and the “lack” of off-road assists. Hey, those enthusiasts can be vicious. 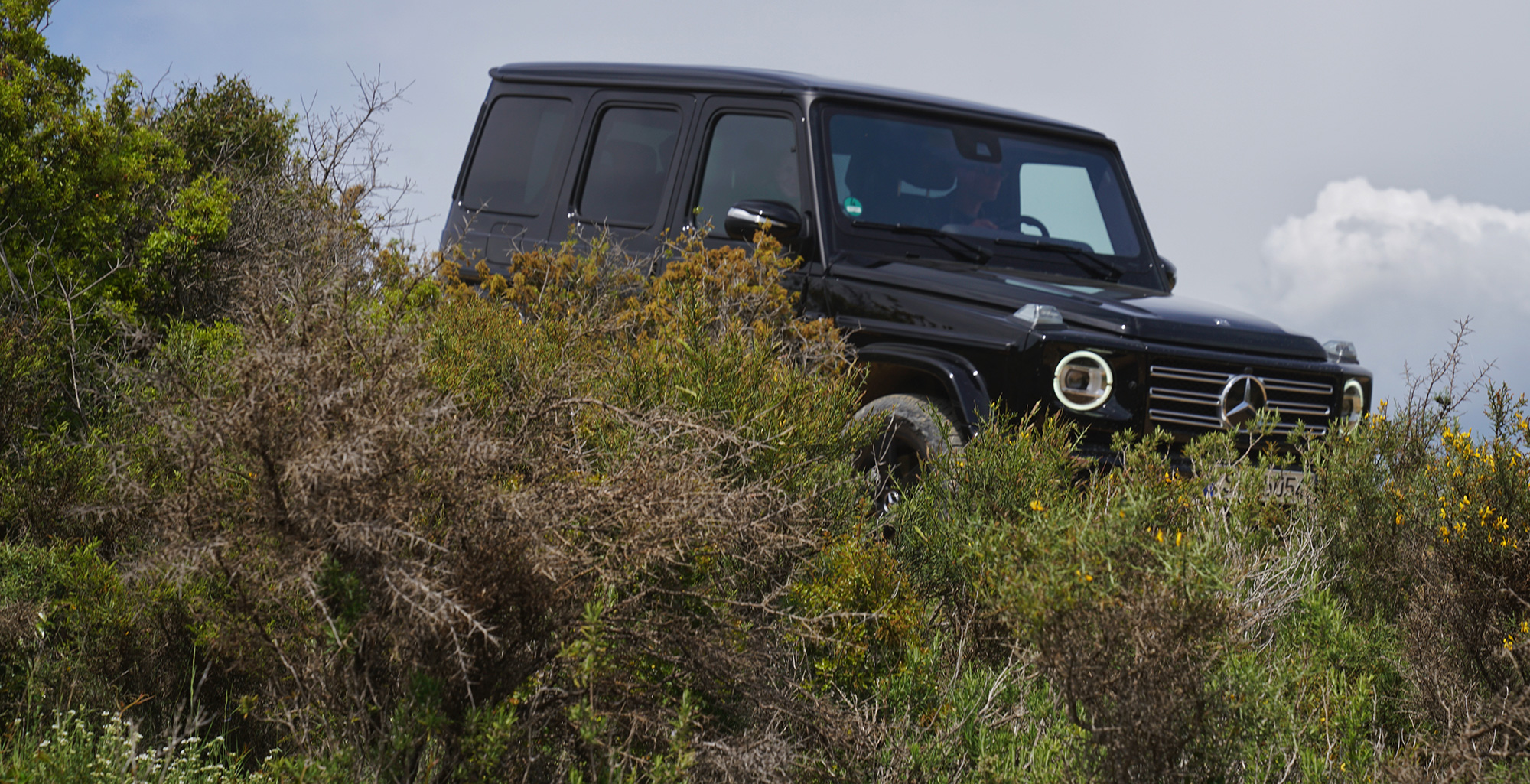 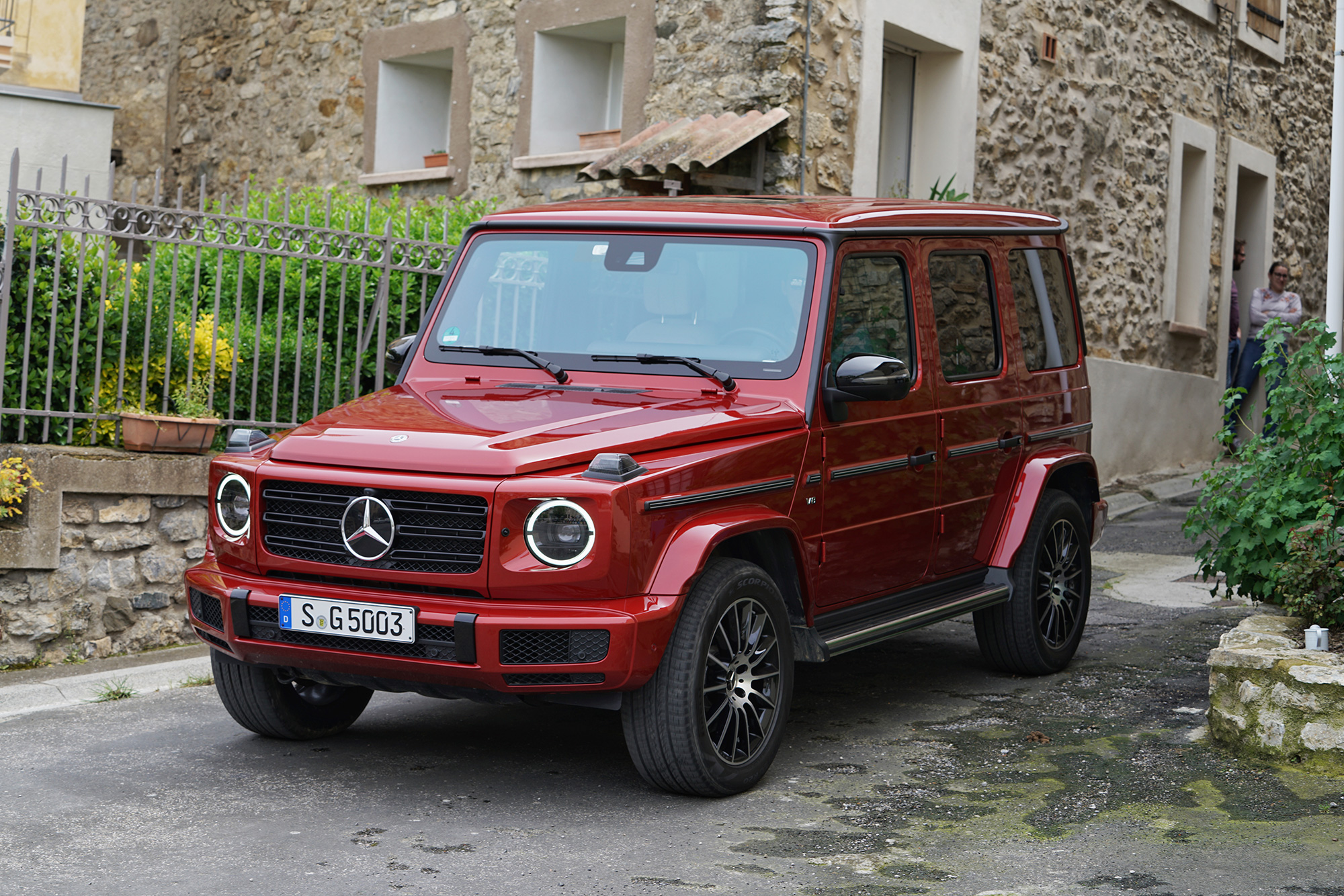 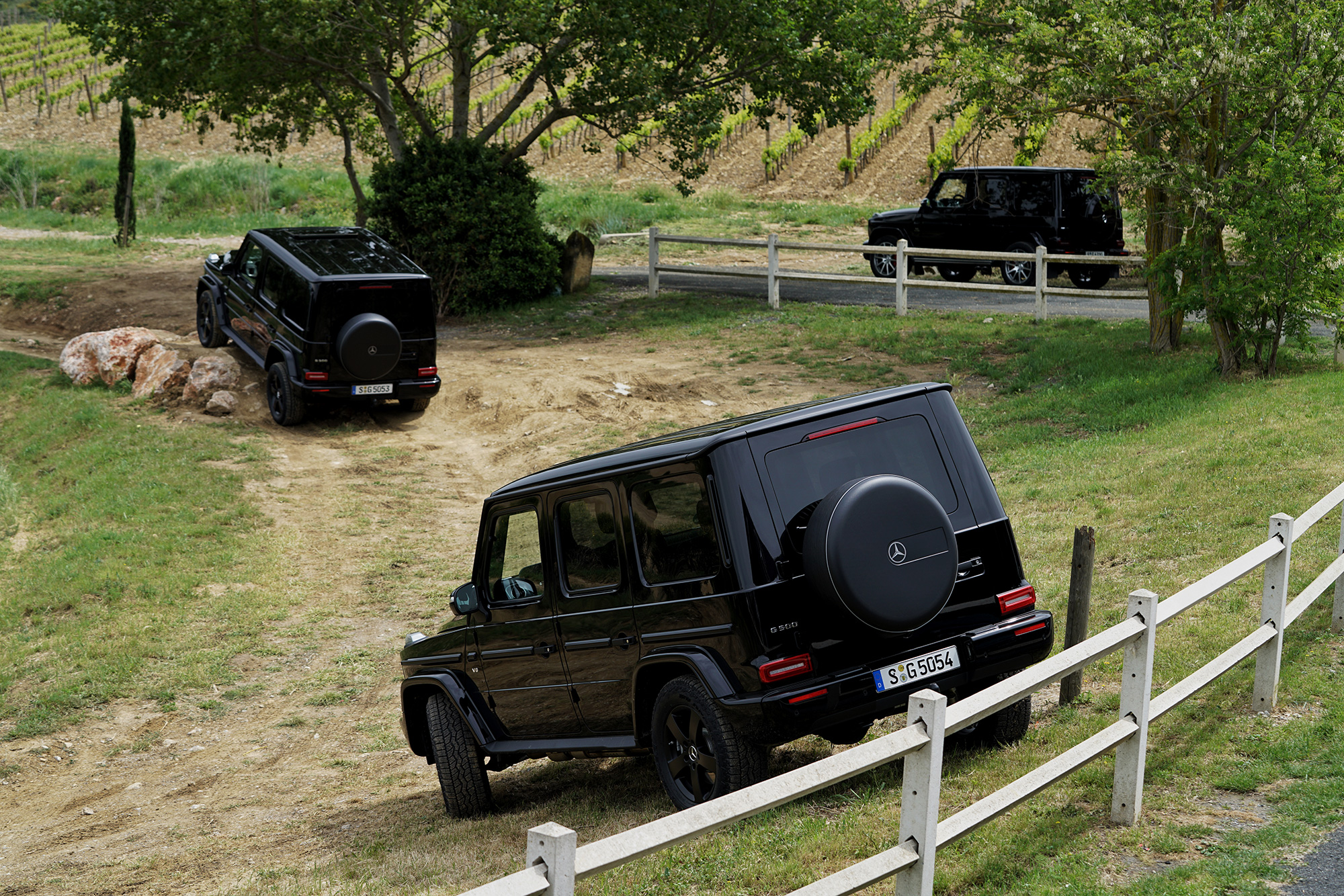 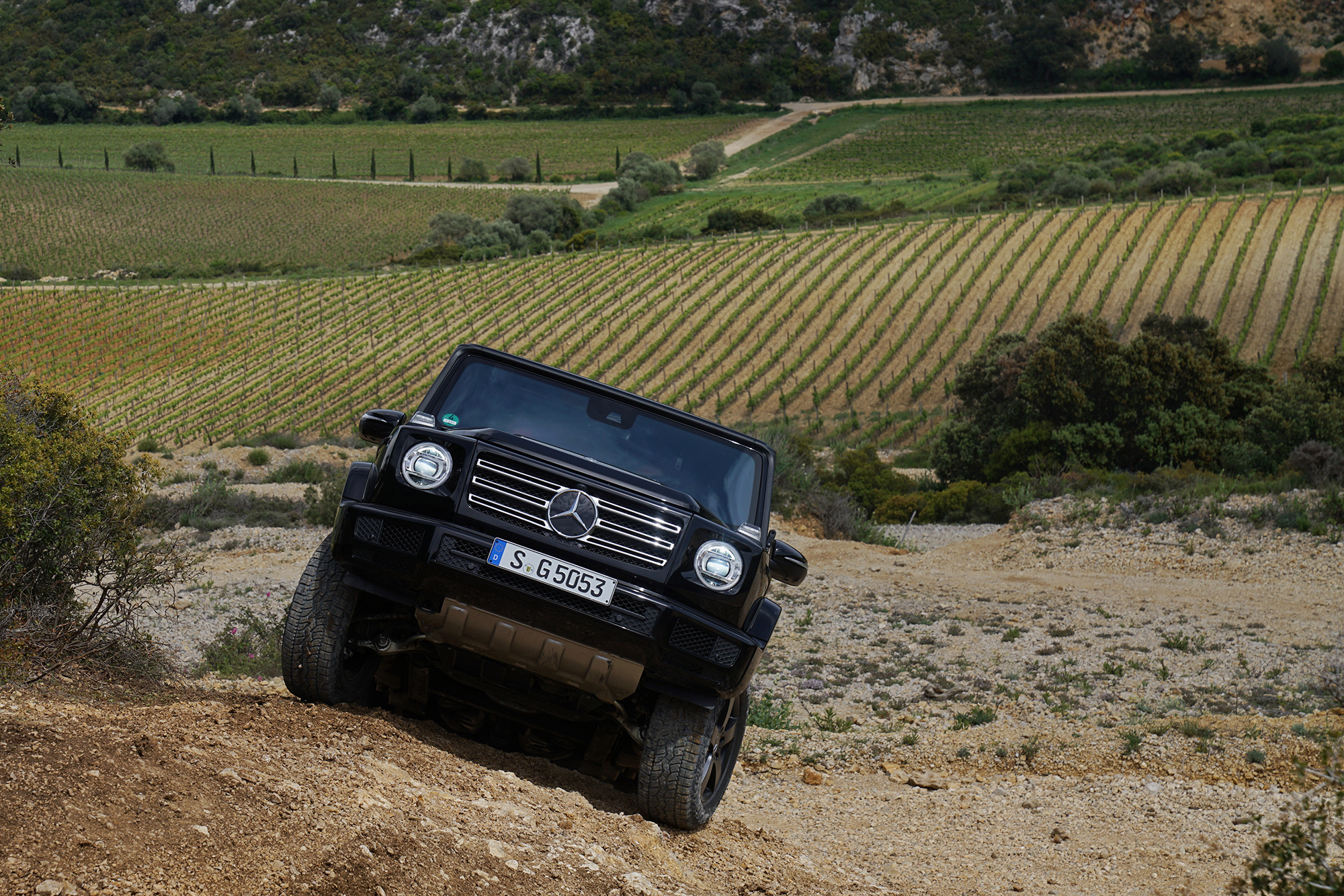 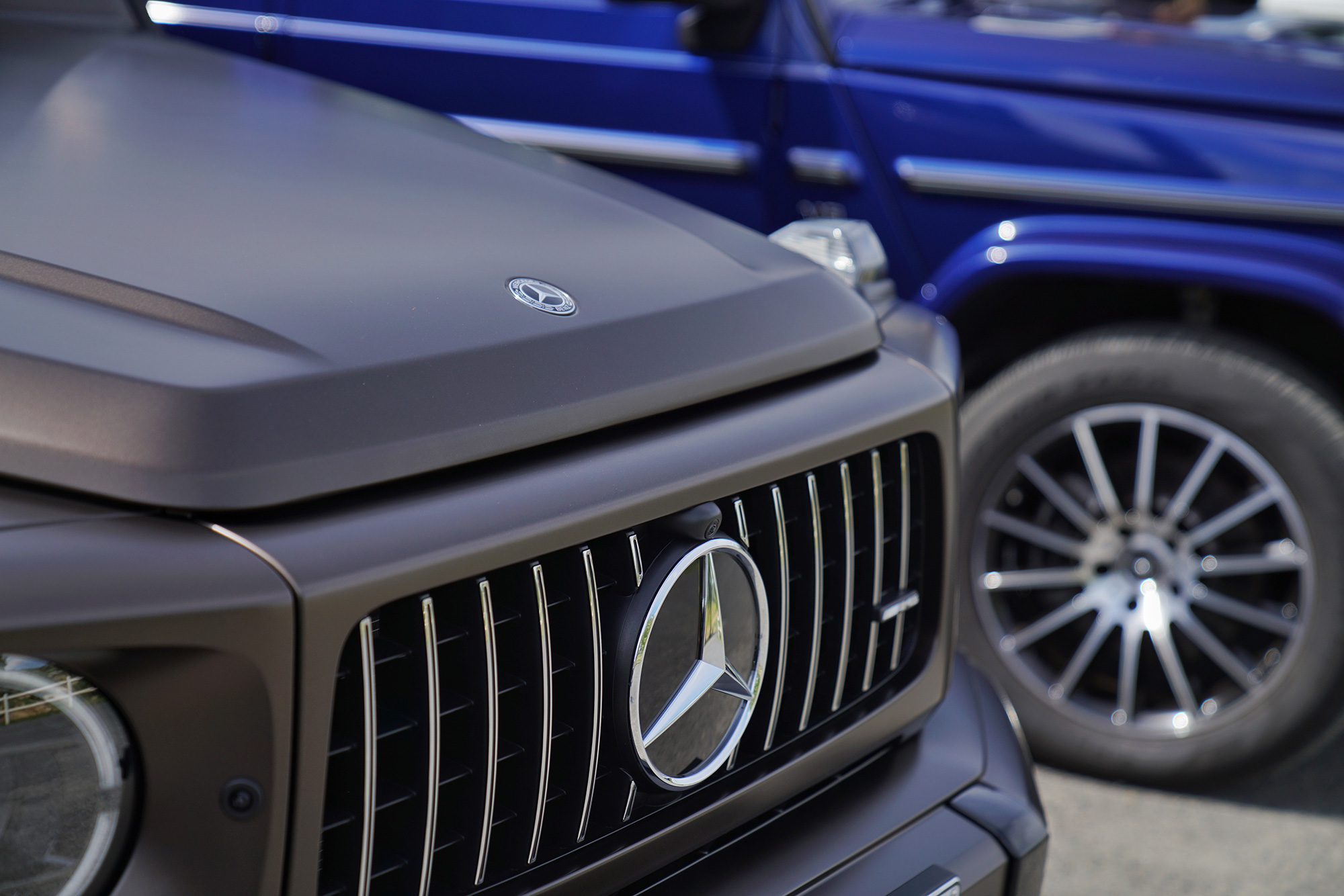 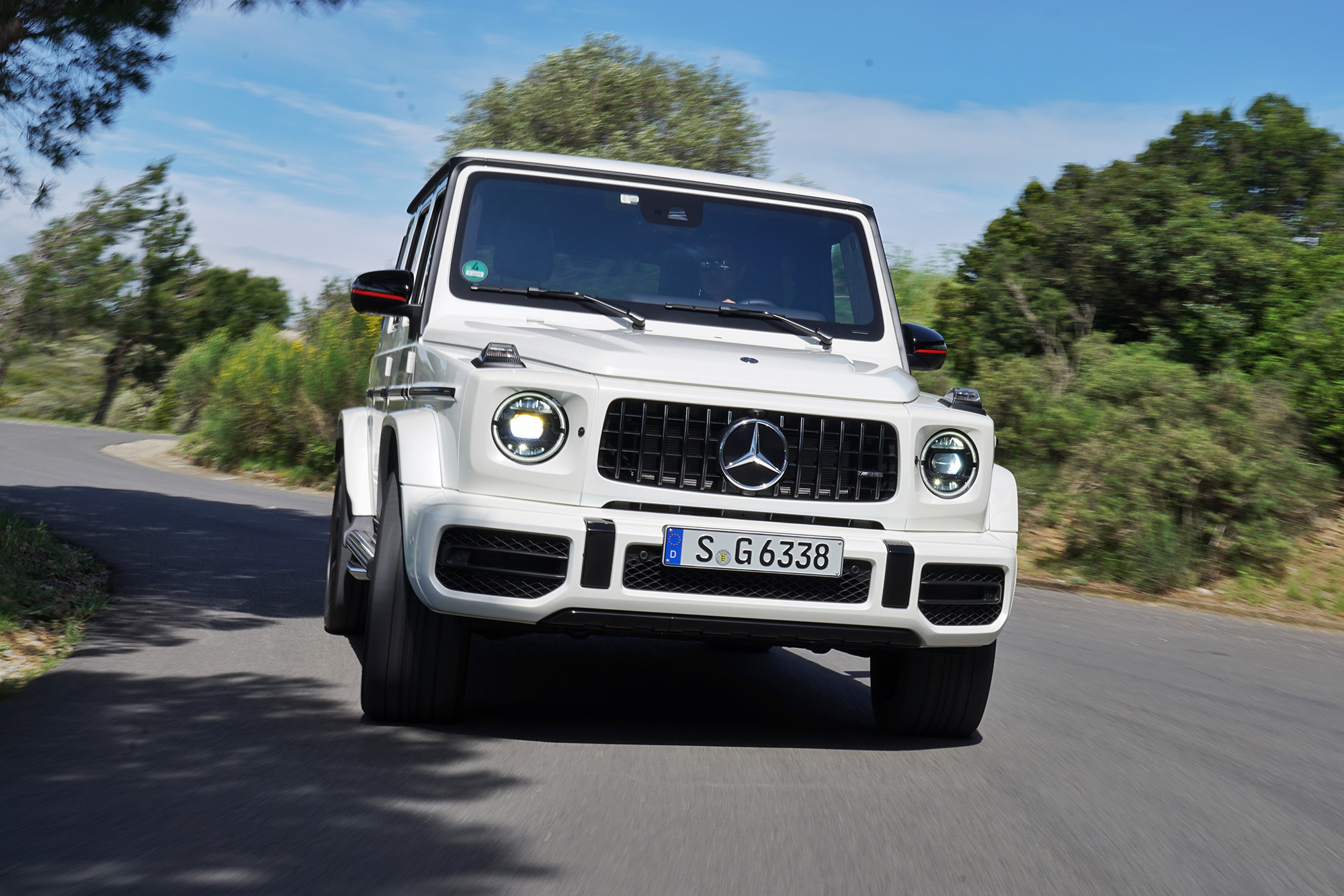