Say sayonara to the world’s most ludicrous off-roader. 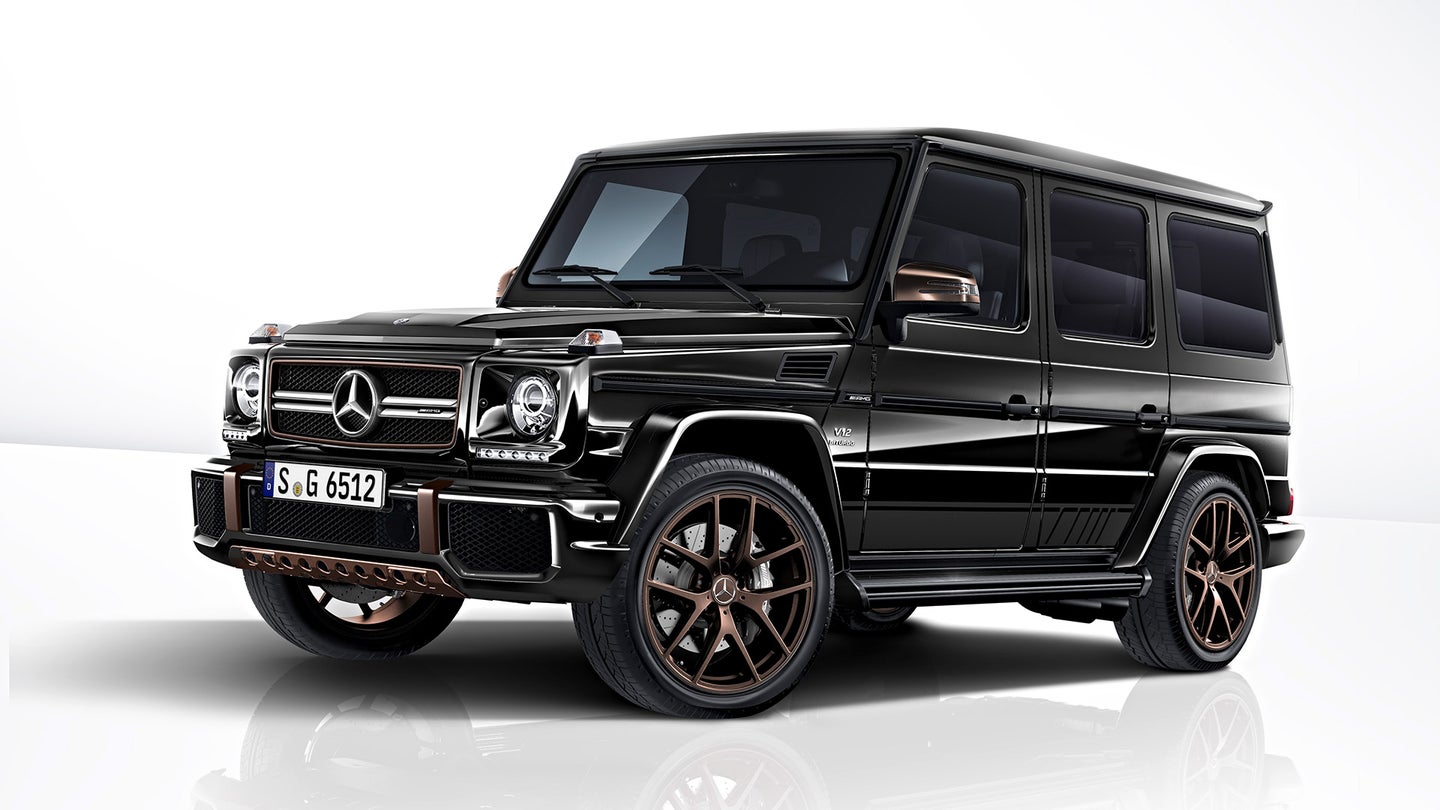 Update: While official U.S. pricing had not been released in America as of the original publication, Mercedes-Benz USA has confirmed to The Drive that the Mercedes-AMG G65 Final Edition will cost $252,690 when it goes on sale in America. 30 of the 65 copies will be coming Stateside, with order books opening soon.

Once upon a time, Mercedes-Benz created a truck designed for the likes of the world's militaries and off-roaders, a German alternative to the likes of Land Rovers and Jeeps called the Geländewagen. People loved it. So Mercedes kept tweaking it, adding fancier features, tonier trim levels, and ever-larger engines to the simple body-on-frame sport-ute. Four-, five-, and six-cylinder engines were replaced with V8s. Eventually, the internal-combustion craftsmen at AMG were roped into building a "high-performance" version: the G55 AMG, packing a supercharged V8. Its dangling side pipes and aggressive tires were a complete mismatch with the SUV's original off-roading mission. Buyers didn't care; they snapped up every one they could find, leading Mercedes to commission an increasingly ridiculous series of other G-Wagen models.

Now, after decades in production, the original Geländewagen is on its way to the exit, to be replaced by an all-new-but-probably-similar-looking model. Daimler has already bid adieu to the rolling brow-raise known as the G500 4×4²; now, it's time for the V12-powered Mercedes-AMG G65 to ride off into the sunset. So to see it off, Mercedes is releasing a limited run—just 65 copies—of AMG G65 Final Edition models.

Don't feel like you're failing at life if you can't tell what makes this G-Wagen special. The biggest exterior difference between the Final Edition and lesser Mercedes-AMG G65s is the matte bronze trim that bedecks the wrap-up model. It coats the 10-spoke wheels, and accents the bumpers, grille, mirrors, and spare tire cover. The tailpipes and running boards, meanwhile, are rendered in matte black, for a change of pace.

Likewise, the Final Edition G65 packs comparable capabilities to any other non-portal axle-equipped, V12 G-Wagen. (With so many variants, you have to get awfully specific with this SUV.) The 0-to-62-mile-per-hour run takes a claimed 5.3 seconds, on the way to a governed (and likely terrifying) speed of 143 mph; slow down a bit, and this Mercedes can plow through nearly two feet of standing water, scramble up and down slopes of 27º, and tilt more than 20º onto its side before falling over.

For the folks out there willing to spend the price of a decent house on the uber-compromised proposition of a 600-plus horsepower, body-on-frame truck that has both a trio of locking differentials and 21-inch performance wheels, all those numbers on the window sticker are just another symbol of their wealth. As they say in the software world, the G65 Final Edition's price isn't a bug—it's a feature.