The 2020 Mercedes-Benz GLB Is a Seven-Seat, Off-Road-Ready Compact SUV

The new GLB wants to be the lifted, slightly more high-riding “wagon” of people’s dreams. 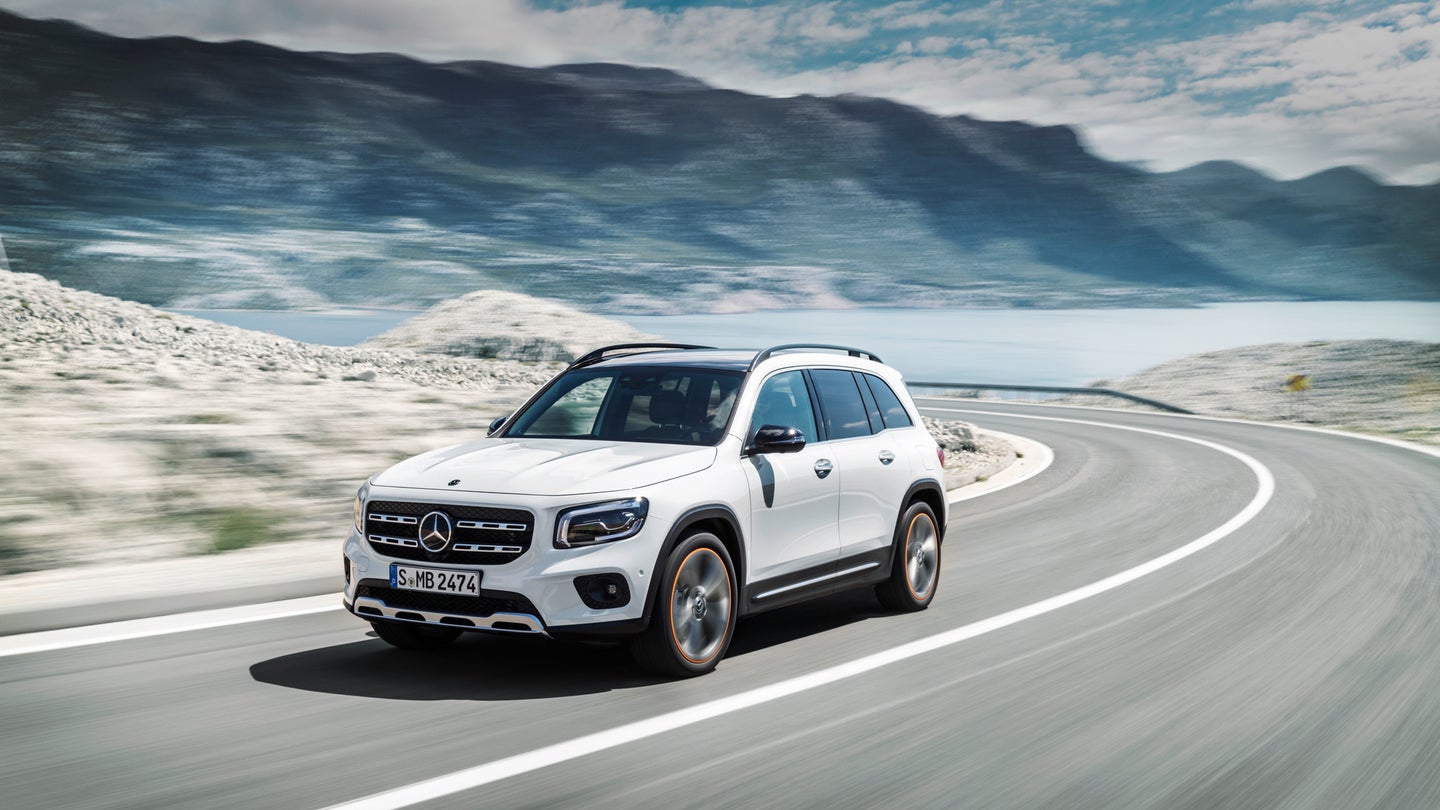 Affluent Americans rejoice, Mercedes-Benz has finally lifted the veil on the brand’s all-new 7-seat GLB crossover SUV, and according to the German company, the GLB is meant to give customers access to the great outdoors, room for family and friends, and enough luxury to satisfy Mercedes' purists.

The new Mercedes-Benz GLB slots between the GLA and GLC SUVs and rides on the company’s compact car platform that also underpins the A-Class, CLA Coupe, and GLA SUV. However, Mercedes-Benz opted to stretch the overall dimensions—the GLB is 5.1-inches longer than its GLA sibling—to offer customers an optional third-row layout. With seating for up to seven, the new GLB aims to pull customers looking for luxury and space for a burgeoning family as the rear seats all have ISOFIX anchors for child car seats.

The new GLB is powered by a 2.0-liter turbocharged four-cylinder engine and backed up by an 8-speed automatic transmission. The engine is rated for 221 horsepower and 258 pound-feet of torque. Customers will be able to choose between front-wheel drive and Mercedes-Benz’s 4MATIC all-wheel drive systems. Those that select the 4MATIC system will be able to clip 60 mph in just 6.9 seconds and hit a top speed of 130 mph.

As you’d expect with any Mercedes-Benz product, the GLB is loaded with the latest technology and safety systems aimed at making your commute easier, safer, and more enjoyable. The main system control is the company’s new MBUX, which represents Mercedes’ latest in infotainment controls. In addition to its normal capacitive touchscreen you’d find in most luxury cars, the GLB’s MBUX system can understand “verbal cues” just like your iPhone’s Siri or Amazon’s Alexa. The GLB is also Apple Carplay and Android Auto enabled. Everything you’d need to quite the drone of everyday life.

Making your drive safer, however, has always been an integral part of Mercedes-Benz’s newest cars and the GLB is no outlier. Included in the GLB’s Driver Assistance Package is Mercedes-Benz’s Active Distance Assist DISTRONIC adaptive cruise control, Active Steering Assist, Active Emergency Stop Assist, Active Lane Change Assist, Cross-Traffic Function, Active Speed Limit Assist, Active Blind Spot Assist, Active Lane Keeping Assists, and PRE-SAFE PLUS with PRE-SAFE Sound with activates safety measures in the event of a rear collision and locks the brakes to prevent subsequent accidents and emits a “short interference signal” which triggers “a protective reflex in the human ear referred to as the stapedius reflex, which can help reduce hearing loss in the event of an accident.”

However, the GLB is a car Mercedes-Benz wants its customers to enjoy as it's destined to be a dominant off-roader. According to the company, the GLB’s proportions and approach and departure angles are all designed to give drivers the ability to go anywhere. The mechanics aim to state that intention, too. Using Mercedes-Benz’s DYNAMIC SELECT switch, customers can toggle between Eco/Comfort which delivers an 80/20 power split, 70/30 whilst in Sport, and 50/50 via an inter-axle differential lock whilst in Off-Road. A preview of its off-road chops and modifiable capability was shown at the Shanghai Auto Show earlier this year with BFGoodrich off-road tires, a slight lift, and off-road lighting. Hopefully, we can get some time with it and its big brother, the G-Wagen.

Though the only GLB currently announced is the one above, there will likely be further iterations and variations of the model to be launched at a later date; including a more than likely GLB AMG variant using the brand’s all-new electrified inline six-cylinder engine. Or the brand's all-new and all-powerful turbocharged four-cylinder packing 400-plus horsepower. That, however, is just The Drive’s editors speculating. And wishing.

Speaking ahead of the launch, Daimler AG’s Chief Design Officer Gorden Wagener said, "Its iconic design lends the Mercedes-Benz GLB an unmistakable SUV character." According to the company, the all-new 2020 Mercedes-Benz GLB will go on sale in the U.S. by the end of the year, though as of right now, the company has not released pricing for the new 7-seat crossover SUV.

That’s higher output per liter than the mighty Bugatti Chiron.