But as it turns out, you can't get the best one in the United States. 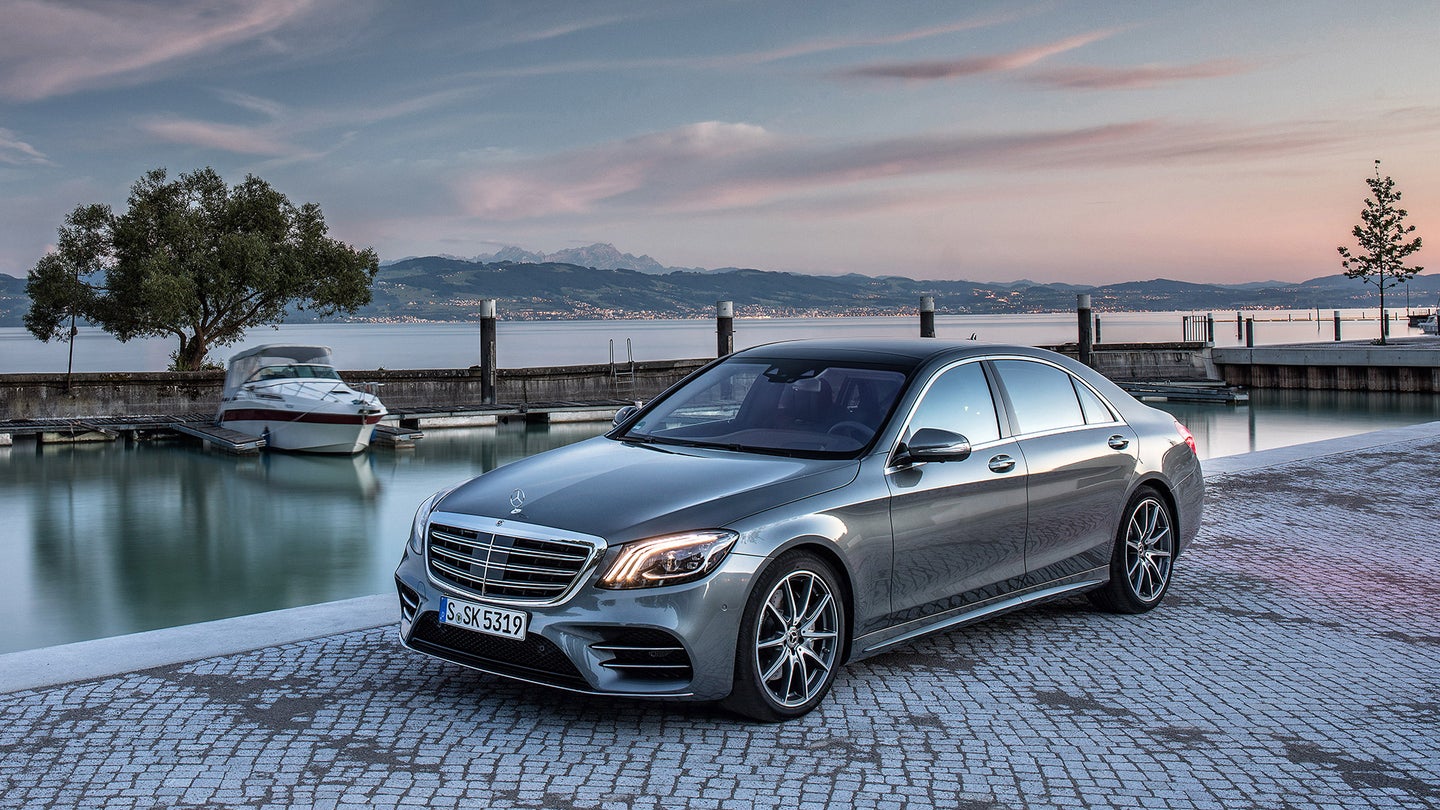 Hey, you. Wanna know a secret about the 2018 Mercedes-Benz S-Class? You can't get the best one here in the United States.

It's true. The most technologically-advanced, innovative version of Mercedes-Benz's flagship four-door is strictly off-limits for all of us who live in the U.S. of A.

Well, technically, you can't get any of the new S-Classes here—at least, not yet. The freshly face-lifted version of the archetypal German luxury sedan doesn't go on sale until autumn in America. When it does, it will offer three separate engines scattered across four different models: a twin-turbo V6 in the S450; the twin-turbo V8 that powers the S560 sedans in both Mercedes-Benz and -Maybach forms; and the ground-shaking, hand-built biturbo eight-pot in the AMG S63. (V12 models like the S65 will arrive a bit later in 2017.)

Which is a shame, because the inline-six-powered S500 is the real standout of the bunch. Not simply because of the engine, either—although that's certainly part of the appeal, with the new 3.0-liter cranking out 429 horsepower and 384 pound-feet of torque, or 19 percent more ponies than America's V6 model and just 34 horses less than the S650. It's enough power to hurl the 4,400-pound S500 from 0 to 62 miles per hour in 4.8 seconds, just a tenth behind the V8 model, and it feels nearly as smooth as an eight-cylinder when you work it hard.

But those six gas-powered cylinders aren't working alone. While you won't see a special badge anywhere on its fluid skin, every S500 is a mild hybrid, equipped with an Integrated Starter Generator that slots between the engine and transmission and fills the role of both alternator and starter motor; the ISG can supplement the petroleum engine with a 21-hp nudge. It's made possible because the S500, unlike the new S-Classes coming to the States this year, uses a 48-volt electrical system—one that effectively remakes the driving experience in a couple subtle, but ultimately blissful, ways.

For one thing, that 48V system gives the S500 the best damn stop-start system the automotive world—or at least the chunk this writer's experienced—has yet seen. The combined starter motor-slash-generator spurs the motor to life in a fraction of a second, with barely a mouse fart of pressure on the accelerator pedal. I generally turn off stop-start systems around the time I hit my first stop light in a car, but I didn't realize it was operating on this S-Class until about three-quarters of my way through the drive, before I promptly forgot about it altogether.

The Integrated Starter Generator also allows the 48-volt S-Class to coast along with the engine off in certain circumstances. Coasting functions aren't new, but traditional ones simply decouple the transmission from the motor and leave the engine to idle. The Benz version shuts down the I-6 entirely, leaving the big Mercedes whispering down the road.

The other minor-yet-mighty way the 48V system transforms the car is by powering one of the turbos by electricity. (Technically, I guess that makes it an electric supercharger, but hey.) The electric 'charger spools up first, while a larger, traditional turbo takes over further up the rev range. The result is effectively zero turbo lag; just smooth, naturally aspirated-style power from idle to redline. All told, the tweaks enabled in part by the 48V system help give this inline-six-powered model 21 percent better fuel economy than the equivalent S560.

That's not to rag on the V8-powered model, though. The S560—coming our way with both rear-wheel-drive and all-wheel-drive, like its S550 predecessor—is a master of long-distance, high-speed travel, a rolling Gulfstream designed to transform commuting from chore to joy.

On the Kate Moss-skinny, ever-winding rural roads running between the idyllic villages dotting southern Germany, it felt a tad floaty, even leaving me wishing for a shot of Pepto once or twice as I tried to keep the girthy, long-wheelbase sedan centered through the switchbacks. But these are roads that leave you comprehending why Europeans flock to hot hatches over muscle cars; the S-Class was never meant for them. No, it shines on the autobahn, where the new V8 lets it settle into a comfortable cruising speed that would earn you a trip to the police station in America. Mat the throttle when the no-speed-limit sign appears, and the nine-speed automatic skips down to the heart of the powerband to make the most of the 4.0-liter engine's might. It takes mere seconds to rush up to the sort of velocities that would be stress-inducing in most cars.

But this is an S-Class, which means stress is basically verboten when you're occupying one of its thrones. The leather seats are every bit as comfortable as they are elegant, though adjusting it to your tastes can take some finessing. (Luckily, it happens to adjust half a zillion ways.) There's even a new feature called "Energizing Comfort Control," which syncs up the stereo, the interior lighting, the climate control, and the seat massage into a symphony of sensory delight. At least, in theory. In practice, it felt more like watching a Pink Floyd laser show from a Brookstone massage chair.

And while the S560 may lack the high-voltage magic of its inline-six-powered sibling, it's still laden with some of the most cutting-edge technology you can find in a car dealership today. The active steering system comes paired with an emergency stop feature that, if you fail to touch the wheel for half a minute when the system is engaged, slowly brings the car to a stop, flips on the hazard lights, unlocks the car, and calls for help. Active Lane Changing Assist lets the driver change lanes with a flick of the turn signal; the car checks the road ahead and the traffic behind to make sure the coast is clear, then oozes across the road. The latest version of the Distronic active cruise control is smart enough to slow down for curves, roundabouts, even toll booths.

It's all impressive when it works, and it does—most of the time. The cruise control is so smart, it seems easy to assume it can handle whatever the world throws at it. But the driver still has to keep an eye on things or else it might, say, charge too far into an intersection. While the S-Class is still considered a Level 2 vehicle, seeing the systems in action reminded me of the main caution about Level 3 autonomy: that people will forget the systems' limitations and let their mind wander, leaving them unable to handle a crisis where the car suddenly throws control back to them.

But if the pseudo-self-driving features intrigue, the advanced safety tech wows. The S-Class's automatic braking can prevent a crash at speeds of up to 62 miles per hour—a fact I was able to confirm by sitting behind a Mercedes test driver as he futilely attempted to rear-end a fabric dummy vehicle at highway speed. And the cross-traffic avoidance system, which prevents the car from T-boning any vehicles coming in at an angle, is smart enough to know how close you'll come to the other vehicle by a matter of inches. If it calculates you're going to hit, it drops anchor; if it can tell you'll miss by a hair's breath, it lets you scoot past. In other words, this car's almost certainly better at avoiding a crash than you are.

Of course, if you want all those safety doo-dads but want to compensate for your worrisome nature by buying the brawniest big car you can, there's the Mercedes-AMG S63. While the S560's engine shares its roots with the AMG unit, the regular car's engine can't come close to the passion this hand-built twin-turbo packs. 603 horsepower and 664 pound-feet of torque, routed to an AMG-tuned AWD system through a nine-speed automatic transmission, is enough to make even this giant car take off like a Miata with a JATO rocket strapped to its ass. Mercedes quotes an official 0-60 mph time of 3.4 seconds, and that's probably conservative. Sure, that may not be as quick as a Tesla Model S, but we'll happily trade the Tesla's faster acceleration for the roar and bark of that 4.0-liter V8.

Still, as impressive as the S63 is, the S500 seems more like the truest expression of the S-Class's soul. Buyers who crave an AMG for its driving thrill are more likely to gravitate towards the lighter, more compact Mercedes-AMG E63 or C63. The S-Class has always been about melding graceful speed and ultimate comfort with the cutting edge of automotive technology. Right now, no Mercedes does that better than the S500.

But as for that I-6/48V combo? It may not be coming to the U.S. in the S-Class, at least not in the near future, but Mercedes-Benz says it will indeed be making its way over here in another model soon. Say, did you folks hear that the new G-Wagen will use an inline-six cylinder engine?