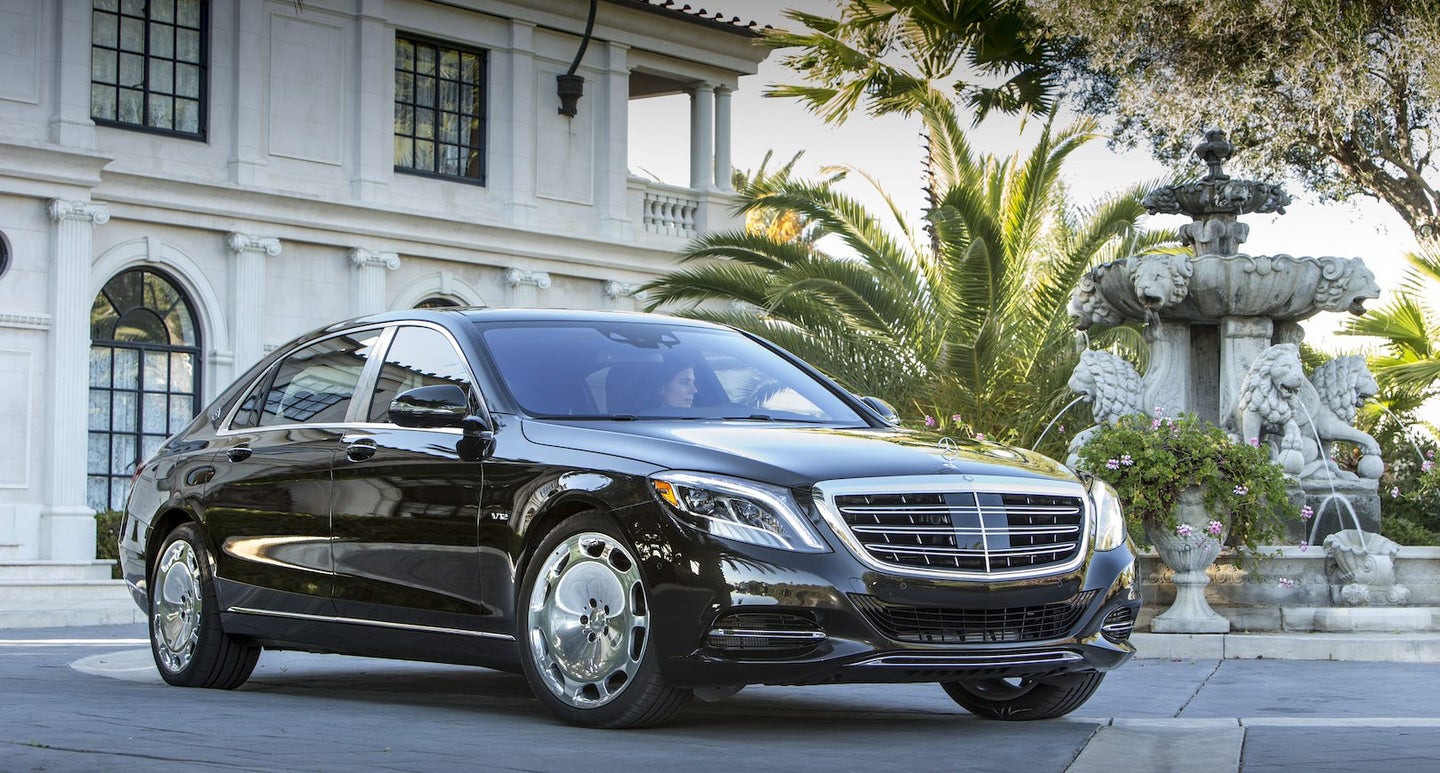 There is nothing quite like the 2017 Mercedes-Maybach S550 4MATIC. Well, that's not true. The S-Class is sort of like it—if you squint your eyes and pretend you're only just rich, and not extravagantly monied. The Maybach is an extended-wheelbase variant of the Mercedes flagship S-Class, and the circumstances under which one should a Maybach are so narrow that even if you had a gigantic pile of bothersome surplus paper cash money, it may not occur to you to buy one until your right big toe has simply grown too tired to touch the throttle.

This is not a criticism of you, the Maybach owner, or of your vehicle. The Maybach S550 we tested at The Drive is a magnificent vehicle and a testament to the depth of Mercedes-Benz's bench in 2017. It's also only the second car of the more than 150 we've had in the past few months that caused a face-to-face, shouting argument over who gets to sit in the back seat.

So what makes it so great? About that back seat seat, and the front seats...

1. Good God, these seats are comfortable

Have you ever been to Thailand? I once went to a massage parlor (not that kind of massage parlor; the kind where they actually practice and perfect the legitimate Thai massage technique) well to the north of Bangkok that was so overpoweringly relaxing that it took me a full day to get my heart rate back up to a place where I could finish a sentence. The driver's seat in the Mercedes S63 has been much ballyhooed by men and women much bigger and smaller than me—and rightly so. To pilot an S-Class is to become agelessly, effortlessly upright. Who needs to lie down when there are seats like these? When I drove the Maybach home through teeth-gnashing Brooklyn commuter traffic, my notoriously kvetchy back felt like it had just eaten a bottle of Xanax.

The 2017 Maybach S550 has a 4.7L twin turbo V8 that turns out 449-horsepower and 516 lb-ft of torque. The S600 has the 6.0L V12 for an additional 74 horses. The V8 is fine. Actually, it's more than fine. The Mercedes V8 is one of the best out of the box right now. It's powerful, and it feels bulletproof when you drive it. But this car isn't about power or speed. It's about the having the power not to drive and to feel comfortable ferrying around in a state of opulent elongation. Like any top-shelf luxury sedan that has a "chauffeur package" as an option, the Maybach is an idea as much as it is a car. Who wants to drive this? Not the owner. Opt for the chauffeur package and eat a box of bonbons.

Does length matter? The Maybach has a wheelbase of 132.5 inches, which is a full 8 inches longer than the S-Class as well as the Ford F150 with the six-foot box. Driving around Brooklyn, the Maybach doesn't drive like a pickup. It drives like an S-Class, which is the luxury sedan world is very high praise indeed.

You know what else the owner wants? A chilled flute of Champagne. The executive seats in the rear are reminiscent of those in the much pricier Bentley Mulsanne, which costs a full $100,000 more than the Maybach. The drink holders can chill a glass of champagne or keep your hot toddy hot for when you have the sniffles. There are dual 12.3-inch high-def screens—one for you and one for your mistress-cum-personal assistant—on which you can watch Dirty Little Liars, surf the internet, and control the dispersal of the optional fragrance.

5. It's actually a value proposition.

About that Bentley Mulsanne. That's a fantastic oligarchmobile: It is long, ostentatious, exquisite in the true sense of the word (extremely beautiful, delicate). It also starts at more than $300,000. The Rolls Royce Ghost comes in just a bit less at $295K and change, and the modest Bentley Flying Spur  with the V8 is even more reasonable, at $190k. All these are great cars in which the powerful can squire themselves around, but the Maybach, which has all the reliability and predictability (and parts) of the S-Class, is the bargain of the bunch. It has the fit and finish of a Mulsanne and a subtlety of design that some might even find not quite showy enough.

The S550 is the first Mercedes-Maybach to come equipped with Benz's 4MATIC all-wheel-drive. The S600 is rear-wheel-drive. I like the 4MATIC on this, though I'm not evaluating its off-roading capability. The winter weather chops add yet another layer of protection from the cruel world outside, beyond all the wood trim, the ambient lighting, and champagne, which warms depressingly fast sometimes. And at $166,200, what a bargain.

It's easy for guys like me to pick on these cars. They are an affront to decent society, and point to the worst kind of acquisitiveness that the first world perpetuates. Like $15,000 watches, the design of luxury sedans of this caliber say, in so many words, So what if there's suffering in the world? I look fantastic. But the Mercedes-Maybach is actually rather restrained. I used to have a boss who was dropped off by a chauffeur-driven black S-Class every day in front of our midtown office building, and it looked just right. There are limousine people, and S-Class people. The Maybach toes the line well.