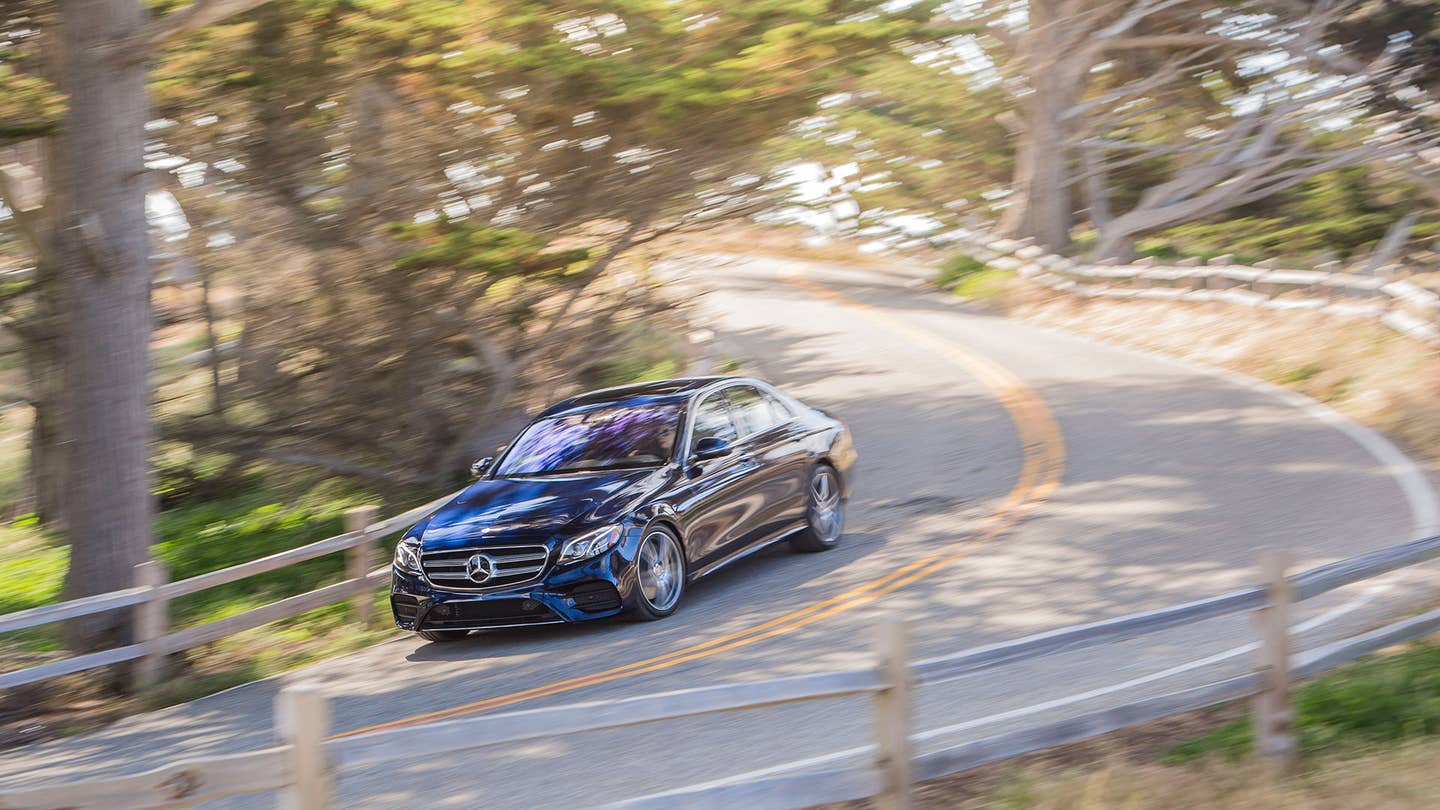 Welcome to Critic's Notebook, a quick and off-the-cuff collection of impressions, jottings, and marginalia on whatever The Drive writers happen to be driving. Today's edition: the 2017 Mercedes-Benz E300.

There is a certain kind of excellent car, like the 2017 Mercedes E300, that delivers its occupants places without ever intruding into their consciousness.

That might, at first, sound like an insult—isn’t that what people say about the Toyota Camry, a kind of personality-free appliance so boring that it leaches from mental frame like the colors in an old Polaroid? Maybe, but this isn't the same thing. That car, with its uncomfortable interior surfaces and under-damped suspension, is noticeable in the wrong ways at certain times, and so occupants can never truly slip into the kind of sensory-deprivation chamber provided by the Mercedes-Benz E-Class, which offers a luxury of 72 degrees—the temperature at which skin feels neither warm nor cool. Driving the E-Class, especially on a commute, feels like floating a few feet above the roadway, with only an occasional beep or boop to remind you to pilot the thing.

That’s not as dangerous as it might sound. For as long as one minute, the Mercedes E300—with its suite of radar- and camera-guided driving aids—will happily drive itself while you text, daydream, or choose a new color of ambient interior lighting, from fuscia to lemon yellow. (But, really, don't do that.) I found the feature especially charming after a day of work; while I’d never abdicate my responsibilities as an urban driver, the fluent driver’s aids took some of the anxiety out of the hectic tango of traffic. That, and the acoustic insulation rivals the double-paned windows in a W140 S-Class.

Mercedes’ autonomous suite, Drive Pilot, proved itself on just such a trip home. There's a particularly harrowing passage of the Brooklyn-Queens Expressway that rockets right under the tony brownstone blocks of Brooklyn Heights. It’s a strange cantilever, closed on three sides, with narrow lanes filled past their lines with speeding trucks. The pavement—what remains of it—has more perforations than the E300’s ventilated seats. As a dump truck came up fast behind the Benz, I saw visions of a trash-strewn death and flicked a stalk, signaling left. After two seconds, the E300 scooted over of its own accord, finding the mathematical center of a slender, squiggling, barely-notated lane.

Many of the reviews of this newest E-Class have called it near-indistinguishable from the S-Class. And while the cars share similar outsides, insides, and electronics, the E-Class is missing something baked into the bones of every S-Class: it’s grandeur. There's a length, heft, and history that engender every Sonderwith a sense of occasion. In contrast, the E-Class is mid-sized and manageable—superior transportation, in a way, if you can forgo princeliness. In an S-Class on the way to sushi, you think: I’m driving an S-Class. In an E-Class, it’s just: Spicy salmon or fatty tuna?

The E-Class I drove is the volume model, and the least obtrusive, with a 2.0-liter turbocharged four-cylinder, a just-adequate 241-horsepower, and rear-wheel drive. (The fruity-sounding V6 from last year’s base model was nixed for reasons of emissions and economy.) In a way, the quiet, character-free four-cylinder is just another asset of Drive Pilot, providing thrust rather than direction. Depending on the premium—pricing hasn’t been announced—discerning luxury buyers and traditionalists might want to wait for the E400 and its 330-horsepower V6.

Outside, the E is as handsome at the C, with nicer detailing in its lights. I’d love a hood ornament, though, which is available, but only on the Luxury trim. On a car like the E300, which does great work returning Mercedes to a historic, comfort-oriented style of tuning, an old-school, upright tri-star would be a period on the end of a welcome statement: “We’re not BMW.”

The interior, like E300/300Es since time immemoriam, comes swathed in MB-TEX, a grained vinyl with the tensile strength of an aircraft carrier’s arresting gear. Naugahyde aside, the rest of the interior is pure grace, with a number of curves and twinkly lights to make a mid-Eighties Benz 300E and its styled-with-graph-paper stodginess run into the costume closet and emerge in a feather boa—something, anything to emulate the new car’s textural interest and multi-hued panache. The start/stop button looks like a tiny turbine engine. Of the entire vehicle, the interior speaks with the loudest voice, and it’s very tuneful.

Personally, I’m of an age and type where I’d still choose character—the smell of leather, the whirr of an audible engine, the occasional mechanical mishap—over utter automotive peace. Serenity later, that is. Aslo, I don’t have the requisite $60,000. But for the folks—middle-aged, perhaps, professional—looking for the ultimate in transportation tranquility absent the S550’s baronial vibes, the Mercedes E300 is a perfect Mr. Cellophane, without the sadsack song.

Mercedes Slashes Prices on the E300 and Jeep Makes a Mini Grand Cherokee: The Evening Rush

Plus, the perfect Father’s Day gift and sunglasses you can afford.