Mercedes-AMG and BMW M have hogged the high-performance glory and sales. But the relaunched and reimagined Audi Sport is itching for a fight. 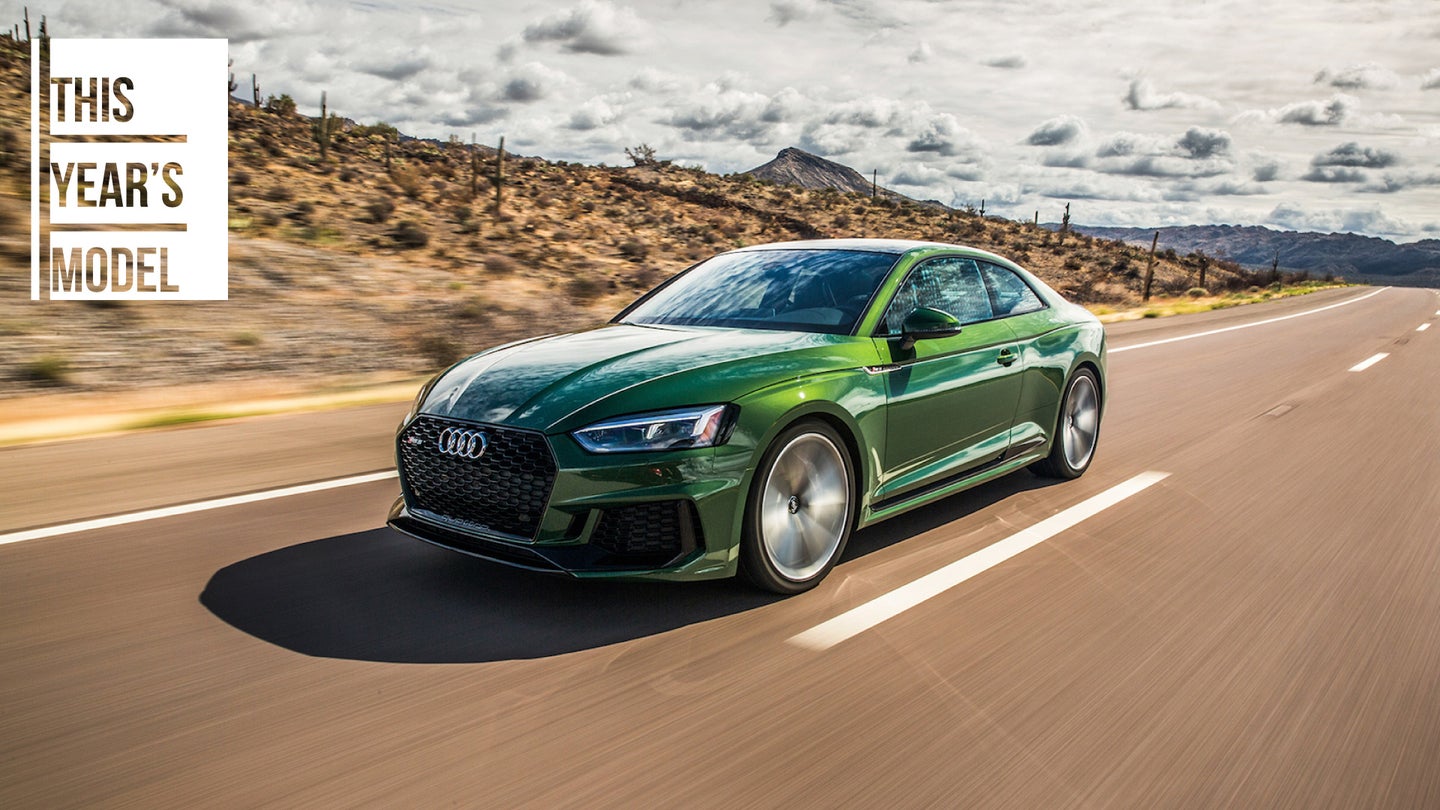 BMW, Mercedes-Benz, and Cadillac will all be saying it, so let me get there first: The 2018 Audi RS 5 Coupe is too damn fast. 444 horsepower and a nasty 443 pound-feet of torque will do that, in a compact coupe that rages from 0-60 miles per hour in a class-best 3.7 seconds. From my speed-blurred perspective, the Audi’s ability to uncork ridiculous velocities from its 2.9-liter biturbo V6 makes for nervousness during my inaugural test drive in the Arizona desert. The RS 5 wants to tear these ribbons of asphalt to tatters, but there are too many places for Arizona’s citation-loving sheriffs to hide; you don't want to run into an Arpaio in the arroyo at the bottom of a multi-mile descent.

And where my recent Jaguar E-Pace drive in Corsica featured too many hairpins, this route features too few: The curves are so gentle that I find myself romping the Audi to 120 mph through sweepers. And even that’s not fast enough to really challenge the RS 5’s talon-like grip and fearsome prowess. At one point, after paddling a few upshifts from the eight-speed Tiptronic transmission (which replaces the previous RS 5’s dual-clutch, seven-speed S Tronic) and enjoying the V6’s burly exhaust blat, I back the Audi down to what feels like a reasonable cruising speed...only to see that I’m “cruising” at 93 mph after a horrified glance at the digital gauges in the ever-lovely Virtual Cockpit display.

In other words, we at The Drive are dying to get this RS 5 on a racetrack as soon as possible, to better explore those sky-high limits and assess its driving personality in extremis.

Assessing the RS 5’s looks is easier, especially for models flaunting the striking Sonoma Green paint—as opposed to Humboldt County Green—that company execs were proudly highlighting at this media drive. The RS 5 is sexy, but in a smart, tasteful, grown-up way; it's the Laura Linney of performance coupes.

It definitely looks tougher and more alluring than its A5 and S5 cousins, including stamped-steel fender flares that are widened by 0.6 inches. The enlarged single frame grille—with a natty, gloss-black honeycomb mesh and “Quattro” script on its lower lip—fronts a radiator that’s entirely flat, a design that generates downforce by shaping air below the car. Front air intakes reach nearly Lamborghini’s Big Gulp proportions to help feed the oil radiator, a new gearbox radiator, and dual Ladeluftkuhlers—intercoolers for the “hot-V”-mounted turbochargers. Versus standard coupes, the RS 5 rides 0.3 inches lower on its standard sport suspension. Side sills and a small decklid spoiler are also rendered in black. In American showrooms, more than 90 percent of RS 5s will see a $1,500 Black Optic package with additional glossy exterior trim, plus 20-inch, trapezoid-design forged wheels with 275/30 summer performance tires.

But if the Audi’s performance soul seems a bit chilly, the 2.9-liter V6 brings things to a boil. This biturbo beauty also powers the latest Porsche Panamera, thanks to the corporate largesse of the VW Group, but the engine was developed by Audi Sport—the re-launched, reimagined performance division that is now directly targeting Mercedes-AMG and BMW M. The V6 isn’t a peaky, spine-tingling revver like the previous model’s naturally aspirated V8, a style of engine that’s sadly being legislated and engineered out of existence. But the V6 is superior in every other regard, including a 3-mile-per-gallon boost in combined city/highway fuel economy that brings it to 21 mpg. The aforementioned 444 horsepower is six fewer than the V8, yet horsepower climaxes at a more-usable 5,700 rpm, versus a redline-bumping 7,250 rpm for the eight-cylinder.

But it’s the torque and efficiency that has every performance automaker kneeling at the altar of turbocharging. Every squeeze of the Audi’s accelerator elicits a whopping 443 pound-feet, with that peak pull available anywhere from 1,900 rpm to 5,000 rpm. The V8 not only delivered a (relatively) piddling 317 pound-feet, but that thrust existed in a high and relatively narrow band between 4,000 and 6,000 rpm. Matthias Noethling, technical project manager for Audi Sport GmbH, says that the V6’s monster torque required the switch to the Tiptronic transmission; Audi’s dual-clutch units are unable to handle such stress.

The V6 also saves 66 pounds versus the V8, which improves the balance of the somewhat nose-heavy Audi, which carries 54 percent of its mass over its front half. Audi claims this RS 5 is 132 pounds lighter than before, sneaking just under the two-ton wire at 3,990 pounds.

Noethling and his team have also coaxed a great sound from the V6. It’s a stormy rumble, but never gets obnoxiously loud. The tune is amplified by an optional RS sport exhaust, with movable sound-boosting flaps. (The plumbing is part of a $3,350 Dynamic Package, which also includes the RS sport suspension and red-painted brake calipers at four wheels.) A resonator tube collects exhaust from dual banks before it splits into oval, black-tipped exhaust outlets. As in some other Audis and VWs, the cabin is so well-insulated that designers felt the need to boost sound inside. Enter the Soundaktor, a vibrating diaphragm located behind the glovebox that amplifies natural engine frequencies below 3,000 rpm. Flip the Audi’s Drive Select switch to Dynamic, and the Soundaktor instantly adds a bass-heavy—but non-digitized—note of menace inside.

With power (and aural pleasure) present and accounted for, the RS 5 delivers the effortless, can’t-go-wrong pace that’s become an Audi signature. As part of its comprehensive overhaul, Audi Sport recalibrated the coupe’s Quattro AWD, from its center-locking Torsen differential to the torque-vectoring sport differential that’s standard on U.S. models. The RS 5’s default power split sends 60 percent of torque to the rear wheels, but can flow up to a maximum of 70 percent aftward; if those rear tires slip, up to 85 percent of power shifts to the front wheels. Further advancing Audi’s hard-fought mission to quell understeer in its cars, the sport differential can shift virtually 100 percent of rear torque to the outside wheel during hard cornering. The diff’s central control unit analyzes road friction and driving parameters to actively distribute force between rear wheels. The Audi can also apply the brakes at any of its four corners, to help correct the car’s handling attitude.

The resulting coupe feels incredibly burly and buttoned-down. Yet for better or worse, I have a hard time sensing those magic tricks on wide-open desert roads in the Tonto National Forest. As we skirt scenic vistas like Roosevelt Lake—the world’s largest man-made lake when it was formed in 1911—the Audi’s mammoth grip makes it virtually impossible to break the tires loose and force those clever Quattro power shifts. To solve that, I detour into a lonely hamlet near Scottsdale for a few 90-degree screamers, and finally feel the RS 5 segue into late-braking understeer—but only a touch—before the Sport Differential overdrives the caboose to help rocket the car out of corners.

Those brakes do feel a bit grabby in local Scottsdale traffic, though I quickly get used to them. But their awesome power is undeniable, whether in standard form—with six-piston calipers (painted black or red) and cross-drilled, 14.8-inch rotors up front—or as the optional carbon-ceramic stoppers with their insane 15.7-inch rotors and gray calipers.

Even the Audi’s automated launch control is an exercise in ruthless efficiency rather than tire-shrieking drama. Thank (or blame) the four-wheel traction that delivers those class-beating acceleration runs with nary a chirp from the Continental SportContact 6 tires, and the conventional torque-converter transmission whose shifts are quick but hardly slam-bang, even in the aggressive mode that’s automatically summoned during computer launches.

Enthusiasts can consider the aforementioned RS sport suspension with Dynamic Ride Control, which replaces the standard, fixed suspension. This unit offers three adjustable settings: Comfort, Auto, and Dynamic. Yet it’s a fully mechanical set-up, not the magnetic, road-sensing adaptive suspension you’ll find on, say, an Audi R8 or Chevy Corvette. Instead, the dampers are connected cross-wise via a pre-filled hydraulic system that reduces body roll and pitch. Adjustments are made via mechanical valves inside the damper housing. Audi’s Drive Select unit manages everything else, including throttle, transmission, exhaust, the rear diff, and a recalibrated three-mode stability control system, which includes an honest-to-God full-off setting.

Owners can also choose either standard steering or Audi’s ratio-adjusting Dynamic Steering. In the latter case, switching to Dynamic mode beefs up steering effort and locks the ratio at 13.5:1 ratio—the quickest of any Audi model—for consistent, predictable response. My only major concern is ride quality. In Dynamic mode, the Audi feels…hmm, what was that technical term? Ah, that’s it: Stiff as shit. Tire noise is also omnipresent at highway speeds. Fortunately, the Audi lets you individualize driving parameters, so owners can dial the suspension to Comfort or Auto on more-dystopian roadways, but keep the powertrain and other parameters on full alert.

Compared with some previous RS models, including the uncomfortably-pricey RS 3 sedan, this coupe is fully competitive on the financial front. The RS 5 starts from $70,875, right in the major-league ballpark with a 469-hp Mercedes C63 at $68,495 and the 425-hp BMW M4 Coupe (with manual transmission) at $69,695. Since the RS 5 is a touch quicker than even the more-powerful versions of its rivals, the $74,695 Mercedes-AMG C63 S and the $77,345 BMW M4 Competition Package with a dual-clutch automatic, Audi sees them as the fairer comparison on price. And I mostly concur.

If the RS 5 is missing anything, it’s the brutish, street-brawling personality that makes the Mercedes such a hoot. But Audi designers and engineers clearly met their brief: The RS 5 is shockingly capable, the fastest car in its segment, yet likely also the most civilized. Audi would be pleased to hear that their RS 5 isn’t the chest-beating, oiled-up John Cena type. How they’ll feel about the Laura Linney analogy, I’m not sure.

Audi Gets into the Rental Car Business, and It Looks Pretty Darn Cool

Vehicles can be rented by the hour and be equipped with lifestyle add-ons like bike racks and cargo boxes.

Only 300 of these limited edition drop-top M4s will be made, and all of them will get the Competition Package.

Stylish, versatile models like the Audi S5 Sportback make it even harder to justify an impractical coupe.