Would you pay Shelby GT350 money for a li'l Audi, even one with 400 horsepower? 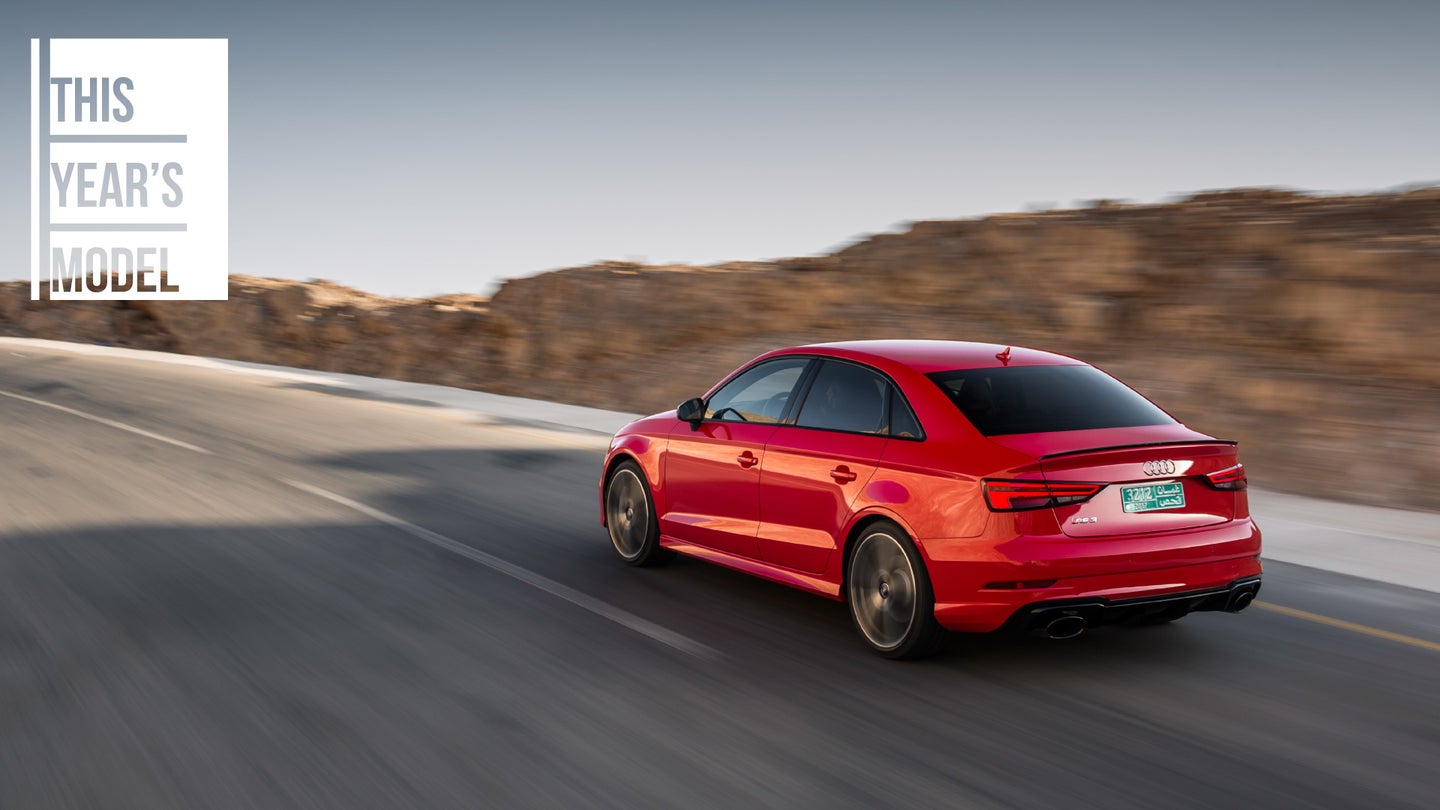 So I’m barnstorming on New York’s Route 301 in the Audi RS3, when I take a break and pull into a deli by the Boyd’s Corner Reservoir. Egg salad-on-rye in hand, I return to the Audi, to find a young man with a E92-generation BMW M3 near it. That’s the smoking 4.0-liter V8 version, whose 414 horsepower barely eclipses the 400 ponies generated by the Audi’s exotic, 2.5-liter turbo five-cylinder.

The M3 owner enthuses over the Audi, as one might for a flame-red, fetchingly tiny sedan that happens to scorch from 0 to 60 miles per hour in 3.9 seconds and top out at 174 mph (with the optional Dynamic Plus Package). He asks how I got my hands on one, so I tell him I’m testing it as an auto journalist. With that, the guy is clearly expecting my own thumbs-up for this evidently hot Audi. Yet my figurative thumb goes a bit sideways, like Joaquin Phoenix's Roman emperor mulling the fate of a fallen gladiator.

“Don’t get me wrong, it drives great,” I finally say of the RS3. “But it’s expensive. Crazy expensive.”

If only. I pull out the car’s Monroney—the federally-mandated window sticker for which we can thank former Oklahoma senator Almer Stillwell Monroney—and direct Mr. Bimmer’s attention to the Audi’s bottom line. Behold, what must be the world’s most expensive small sedan: The 2018 RS3 starts at a base of $55,875, a price has been ratcheted all the way to $66,775 for my well-optioned test model.

Here’s where savvy readers may note—with or without face palm—that the Audi RS3 Quattro is built on the platform of the front-drive Volkswagen Golf. Or, that the Golf’s own performance offshoot, the brilliant VW GTI, can be had for less than $30,000. Yes, the RS3 Quattro will run Audi-logoed rings around the GTI—or, in a match play of AWD Golfers, the VW Golf R. Yet at a loaded price that brushes $70,000, the RS3 makes even a BMW M2—at $52,500 to start and $58,000 fully equipped—seem even more of a bargain. (I realize the catch is to find an M2 at list price, but that’s a separate issue; besides, RS3 fans also face a limited supply.)

While the Audi is a touch faster in a straight line, it’s not as euphoric or engaging as BMW’s compact coupe. Two big reasons: First, the BMW drives its rear wheels, and only its rear wheels. Secondly, M2 buyers can (and do) choose a manual transmission, where the Audi offers only its (admittedly brilliant) seven-speed dual-clutch S Tronic automatic gearbox.

The RS3 is certainly no ordinary A3 sedan, beginning with the styling-booth transformation from Clark Kent to Man of Steel—or maybe aluminum, as aluminum-matte trim gleams from stem to stern. A burly front fascia and a beautiful rear diffuser and oval exhaust outlets (with optional black tips) highlight Audi’s artistic eye for details.

The interior also advances the luxurious minimalism that’s an Audi (and especially an A3) signature. The curling black dashboard is like Steve Jobs’s turtleneck reimagined for the automobile, lightly accessorized with porthole vents. Diamond-stitched Nappa leather sport seats, with their spreading wings there to support upper torsos, would look at home in a $100,000 car.

Against this blank, black canvas, deluxe touches really stand out: Optional carbon fiber inlays; aluminum door sills with illuminated RS3 logos; a three-spoke, flat-bottomed steering wheel; and of course, the Virtual Cockpit driver’s display, part of a $4,800 Technology Package that includes the MMI navigation system and touchpad, a Bang & Olufsen sound system, and Audi side assist, a clever feature that flashes a visual red alert for any occupants if they’re about to fling open a door into the path of an oncoming car or bicyclist.

It’s all the work of Audi Sport, formerly Audi quattro GmbH, which is looking to battle the better-known Mercedes-AMG and BMW M performance divisions. The RS3 has long been kumquat-sized forbidden fruit for Americans, since two previous editions were withheld from U.S. showrooms. Some Yanks will still pine for Europe’s wagon-y RS3 Sportback version, but at least we get this new sedan, developed specifically for the U.S. market.

Fans who uncrate this fresh-off-the-boat RS3 will find its biggest gift beneath the hood: An aluminum-block, turbocharged five-cylinder that squeezes 400 horsepower from just 2.5 liters (more specifically, 2,480 cubic centimeters) of displacement. That power density of 161.3 horsepower per liter tops not only the hottest hatches like the Ford Focus RS, but the likes of a Nissan GT-R Nismo, too. It nearly matches the 169.4 hp/liter of the Ferrari 488 GTB, which makes 661 horsepower from its bi-turbo, 3.9-liter V8.

Naturally, this Popeye of a motor requires a big can of spinach to deliver such a wallop: A single turbocharger that squeezes intake air at up to 19.6 psi, with efficient fuel delivery that blends direct and port injection. Those five cylinders conjure howling ghosts of the Audi ur-Quattro and Group B Rallying, including the layout’s inimitable sound. That quintet’s soundtrack, boosted through an optional dual-flap sport exhaust, is due in part to its firing order, a cylinder roll call of 1-2-4-5-3. The five-banger sounds like a leopard’s growl slathered in codeine syrup, with a panting whistle of turbocharging.

And once that big turbo spools up—following a quick beat of lag—the Audi explodes like a uranium-enriched firecracker. Toggle up launch control, and this Honda Civic-sized sedan will beat a Corvette Stingray from stoplight to highway speed. Audi claims 3.9 seconds to reach 60 mph, but 3.6 seems more like it. As in the new Audi TT RS sports car, a maximum 354 pound-feet of torque is served anywhere and everywhere between 1,700 and 5,850 rpm. Audi’s seven-speed, automated manual gearbox is a brilliant co-conspirator, aside from undersized, plastic paddle shifters that seem to have missed the designers’ meetings at Audi HQ.

The new engine’s aluminum block, lightweight hollow-bore crankshaft and magnesium oil pan help shave 57 pounds of weight from the previous five-cylinder. That mass reduction occurs where it’s most helpful in a front-drive-based platform: the Audi’s nose. Like the Focus RS and ST or the VW Golf R, the Audi is an example of a front-wheel-drive or AWD car that strives to mimic the neutral handling of a rear-drive car—and often succeeds.

The RS3 adopts several strategies to avoid understeer, which occurs when front tires get overstressed, lose traction and begin pushing wide of the intended path. First, the Audi’s Haldex-based Quattro AWD sends between 50 and 100 percent of torque to the rear wheels as needed, allowing the front tires to use their quota of grip for cornering rather than laying down power. Unusually, the Audi also reverses the usual order of “staggered” wheels, placing its widest rubber—255/30R-19 Pirelli P Zeros—up front, compared with 235-section width rear tires. (The thicker front rubber is part of a $1,450 Dynamic Package that also brings summer tires and the black-tipped sport exhaust).

Throw in that lightened front end and brake-based torque vectoring, and you’ve got a pint-sized sedan can lean harder on its front tires while the majority of 400 horses pushes from the back. The Audi’s electric steering (light, laser-accurate, a bit numb) also speeds up its ratio the farther you dial the wheel off center. My RS3 featured robust carbon-ceramic brakes, albeit for the front wheels only. They’re part of that Dynamic Plus Package that also boosts top speed from 155 to 174 mph, and replaces the adjustable magnetic shocks with a fixed steel suspension. That firmer set-up is great for two-lane hijinks, but proved a bit of a kidney-puncher in the urban moonscape of New York.

On the roller-coaster of Route 301, though, the Audi attacks curves with that slingshot feel that fans of the Golf R and Ford Focus RS have come to know and love—but with even more sheer velocity. Like most any performance Audi from the TT to the R8 supercar, the RS3 feels like a car that can’t put a foot wrong, especially on slippery roads that confound rear-drive machines. As for its direct competition, the Audi positively whips the 375-hp Mercedes-AMG CLA45 4Matic, whose sum never exceeds its poorly integrated parts. But despite two fewer doors, the BMW M2 still wins by sending power to two fewer wheels: There’s a playfulness and bite to the BWW, like a sharp-toothed Rottweiler pup—including more tail-wagging ability—that the Audi mimics but can’t match.

Coming from someone who’s inordinately fond of small cars, and who spends far too much time jousting in city traffic, I understand that the RS3’s tiny size is part of its appeal. But there’s still a limit, or there should be, on the premium you’ll pay for downsized pleasure.

For all RS3’s winning qualities, I won't do what too many auto journalists do and blithely overlook the price, or chalk it up to something stupid like “exclusivity.” It's an Audi, not an Aston Martin. I tend to avoid playing the “you could have this car instead” game, especially when comparisons aren’t apples-to-apples. But the Audi leaves me no choice. For the price of the RS3 or less, you could not only choose the M2, but also the Mercedes-AMG C43 sedan with its knockout, 362-hp bi-turbo V6. That Mercedes objectively plays in a larger, more-luxurious class—yet at $54,395 to start, somehow costs $1,100 less than the Audi.

And if you’re this willing to sacrifice practicality for performance, how about a Ford Mustang Shelby GT350? Hell, just keep walking through the Audi dealership, until you reach a nicer neighborhood that includes the S4 sedan and S5 Sportback: The latter hatchback is a dream car for most people and budgets. It scoots to 60 mph in 4.5 seconds with a 354-hp turbo V6, and brings an overwhelming edge in luxury, passenger/cargo space and versatility versus the RS3. Yet even that S5 Sportback costs $500 less, at $55,375, and it's better equipped in that base trim.

I can usually form a mental picture of who’s buying a certain car, and clearly the Audi skews young. But I struggled to imagine the man or woman with the means and inclination to shell out roughly $1,100 a month (over 60 months, with a 10-percent down payment) for any small sedan, no matter how bodacious.

Then it hit me. Many RS3 “buyers,” I suspect, won’t be making payments at all. This is a “Thanks, Mom and Dad” car, gifted by parents wealthy enough to scribble a check and not ask themselves—or their progeny—if a $29,000 GTI might make more sense. Those successful grown-ups aren't interested in driving such a little squirt themselves, because an Audi Q7 is more their speed and status—or a real sports car if they're looking for weekend fun.

If this little Audi is indeed an ultimate rich kid’s car, I can only hope that RS3 recipients are somewhat deserving; that they’re segueing from Yale Law School to a 60-hour-a-week job, not laying around a pool and chopping lines. Either way, I’ll at least admit to being jealous.