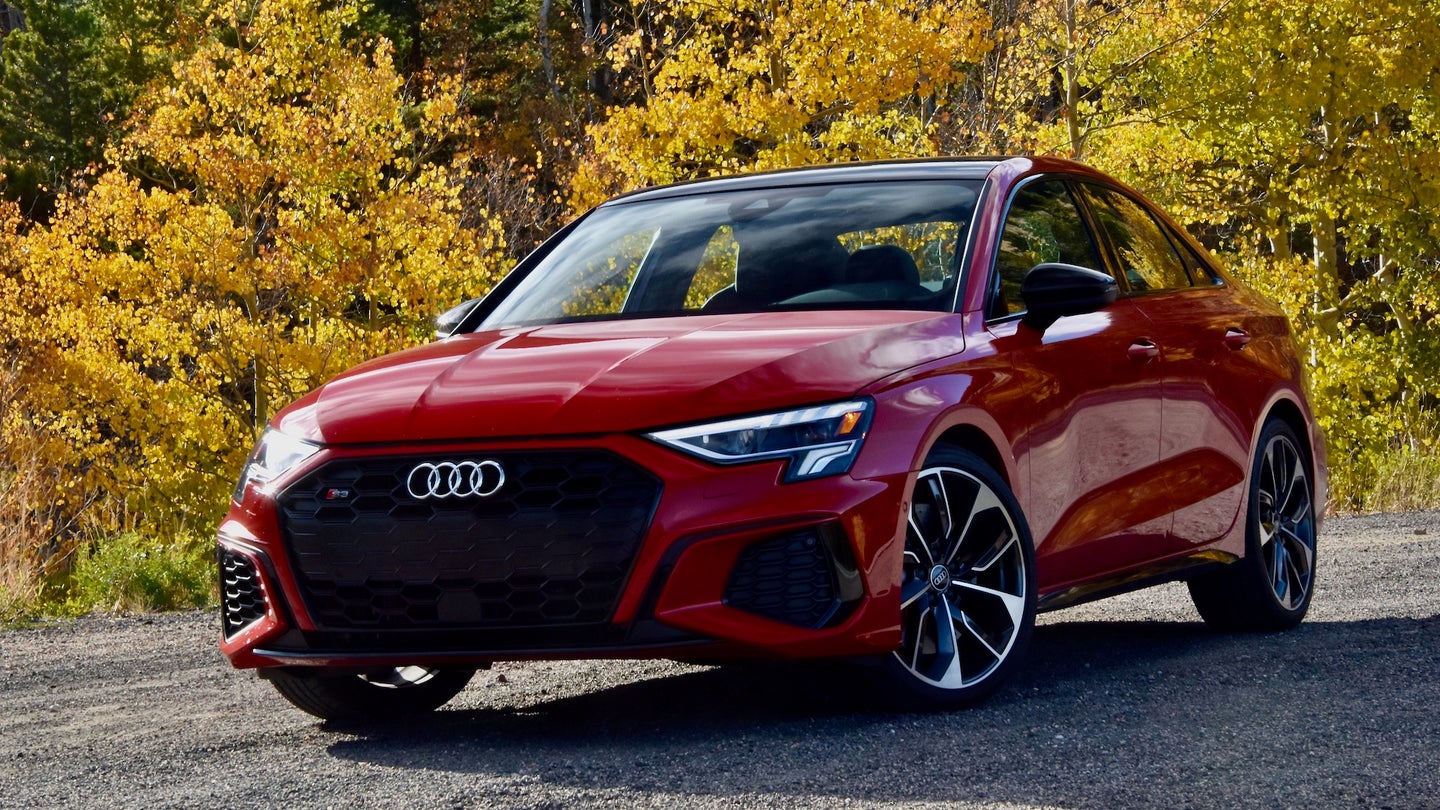 The American tendency to confuse overconsumption for opulence leads to strange notions, such that "small luxury car" can seem like an oxymoron. In a country with such wide roads, cheap gas (relatively speaking, anyway), and a love of suburbs and big garages, why dream small? Why stick to premium subcompacts like the 2022 Audi A3 when the same money can buy a full-size pickup, one that might almost match it for fuel economy?

Why, for the same reason we buy anything sold by the ounce rather than the pound: the expectation of a more refined experience. That's what you get from Audi's redesigned entry-level model, which is everything you expect from a luxury car. It's quiet, comfortable, more spacious than you might expect, and brings driving dynamics in accordance with its premium status.

It's inescapably limited by being a subcompact sedan, yes, but if you can acknowledge owning a crossover doesn't make you self-sufficient, you can just relax into an Audi that proves living small and living large aren't the contradictions they may seem. And the S3 shows that sport sedans still provide plenty of thrills when you need them. 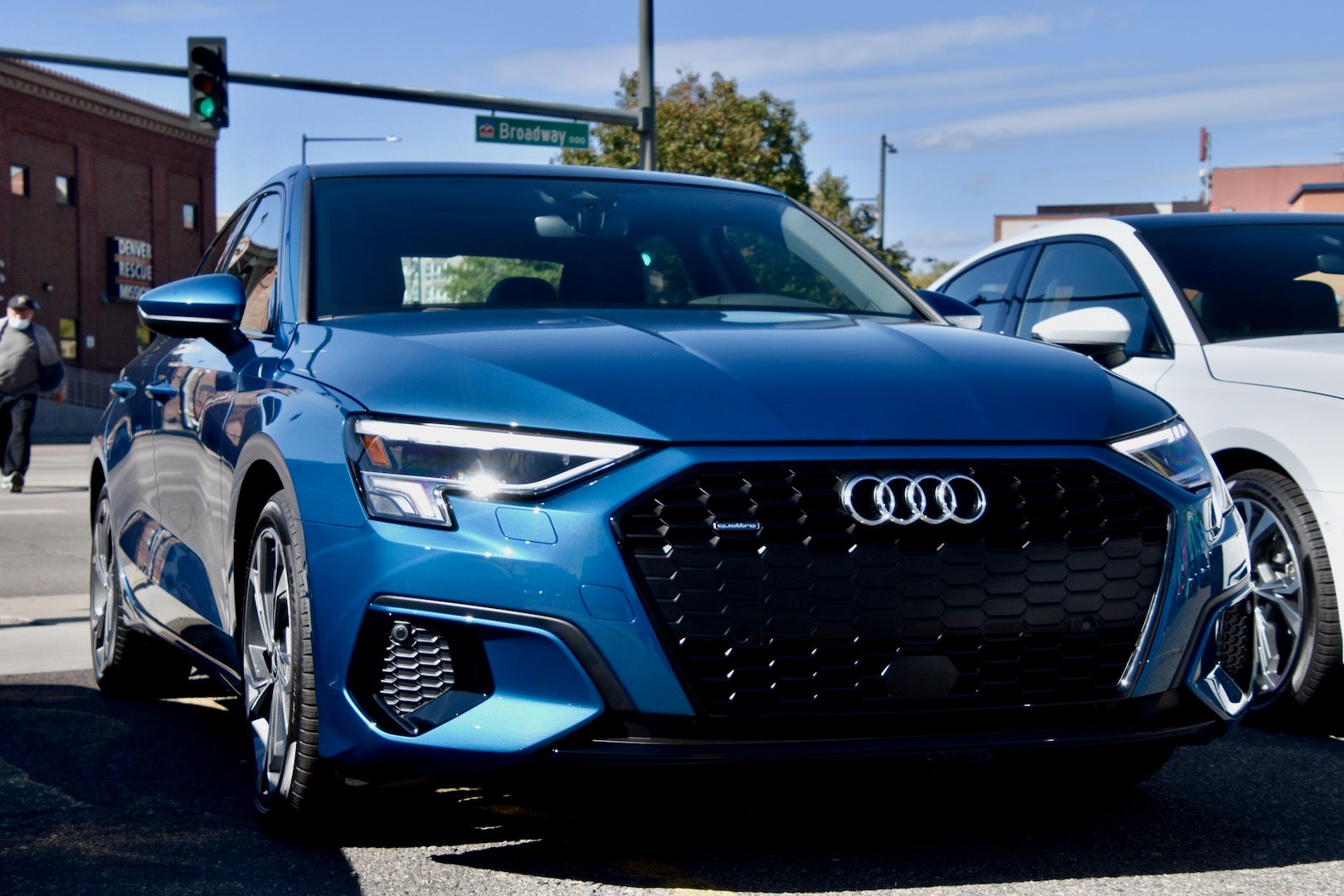 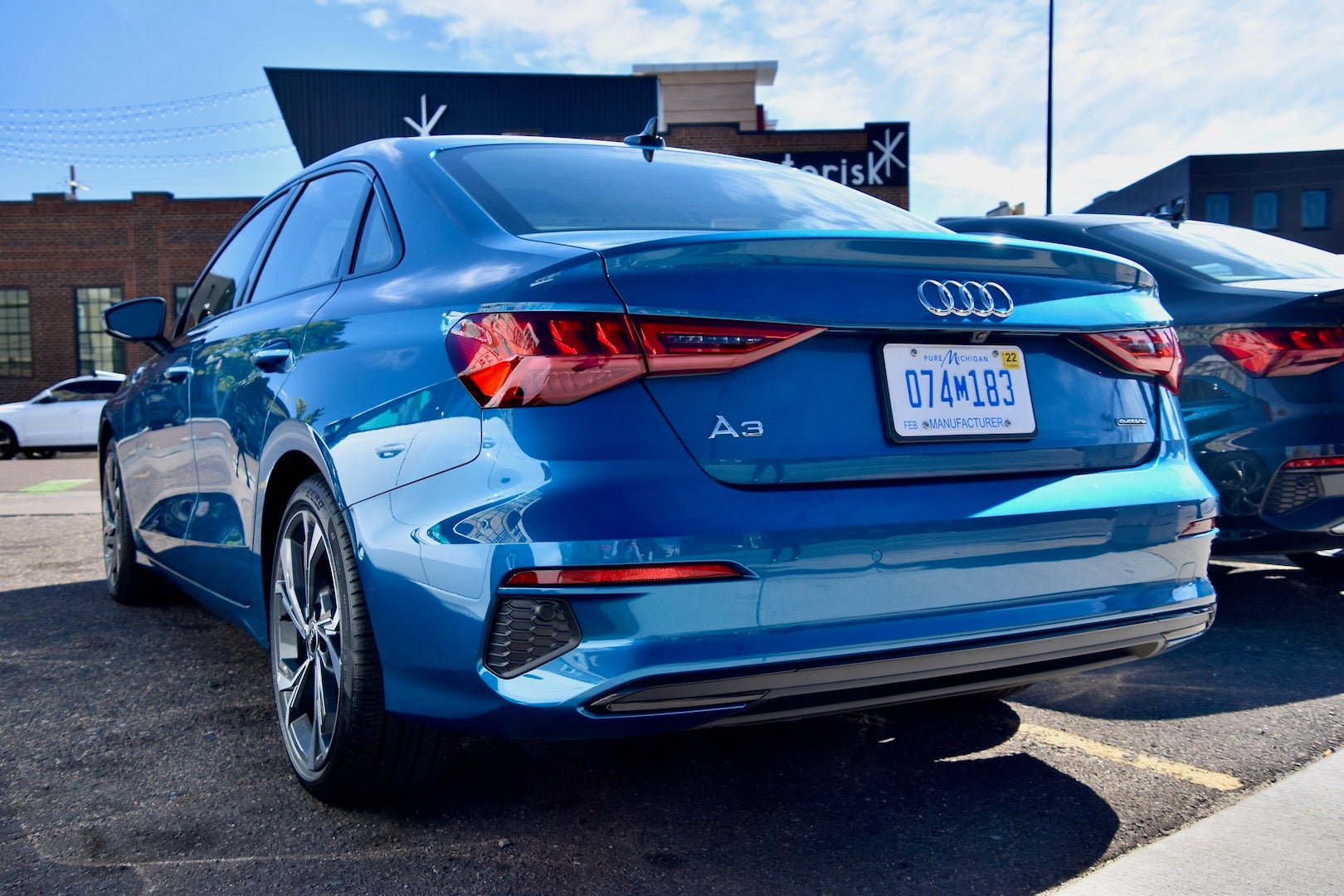 Audi's smallest model available in the States has been fully redesigned for 2022 to be slightly larger than its forebear, coming in 1.4 inches longer, 0.8 wider, and 0.5 taller. The A3 models sold here are now exclusively sedans, so the A3 Sportback e-tron hatch remains discontinued, much to the widespread chagrin of possibly dozens of people.

Despite this size upgrade, it's significantly slicker, with a 0.26 drag coefficient, which boosts gas mileage in combination with the segment's only mild-hybrid drivetrain. That consists of a standard 48-volt boost—adding 12 horsepower and 37 pound-feet of torque—to its 2.0-liter turbo-four engine, whose improved stop-start system kills the engine while coasting, and in traffic uses a camera to restart when the car ahead moves for a seamless response.

Its seven-speed automatic communes with available Haldex-based Quattro all-wheel drive—not the renowned system on which Audi built its brand, but not bad in its own right. Four-wheel brake vectoring further augments control in all weather, while standard LED headlights and taillights with automatic high beams maintain visibility.

Seventeen-inch wheels are standard, while 18s are available along with occupant exit alerts. Base "Premium" models have access to a Convenience Package with auto-dimming mirrors, seat memory, a wireless keyfob, parallel and perpendicular park assist, SiriusXM, and blind-spot and rear cross-traffic monitors. All are standard on Premium Plus, which also adds inductive phone charging, leatherette door armrests, and enhances safety tech with adaptive cruise, lane-centering assist, and a 360-degree camera.

The Technology Package builds thereon with sign recognition, which is displayed in a 12.3-inch digital dash, and bundled with a 680-watt, 15-speaker Bang & Olufsen 3D sound system. Again, these become standard on the trim above, Prestige, which also gains headlight washers, LED interior lighting, and a head-up display.

If pure combustion is more your jam than hybrid power, upgrade to the performance S3, which gets you 306 horsepower and 295 pound-feet of torque capable of flinging it from zero to 60 mph in 4.5 seconds. It rides 0.6 inches lower to reduce its center of gravity, and with the S Sport package, includes adapting damping for easygoing and hard-charging driving alike, not to mention red calipers for its standard 14.1-inch two-piece drilled rotors.

Park assist and 18-inch wheels are standard, while 19-inchers are available alongside the aforementioned Tech Package and exclusive diamond-stitched Nappa leather.

I drove equal specifications of mid-range Premium Plus cars, the S3 with its optional adaptive damping, both with the Technology Package, optional wheels, alloy paint, and black appearance packs. While I generally find chrome tacky, I honestly felt it worked better here than the black, a color cheapened by crossovers' overuse of plastic cladding. Audi's styling also suffers some from its application to such a rounded subcompact sedan, though less so than its direct competitors; the Mercedes-Benz A-Class looks like a caricature of the E-class, while BMW's 2 Series Gran Coupe has an ugly face and a Toyota Prius-like roofline.

The A3's interior, despite sharp angularity that feels more appropriate to a Gundam, is attractive yet undistracting, with no cut corners on materials and sound build quality. Adjusted to my liking, the diamond-stitched Nappa seats that I could run my hand over all day supported my spine with a pleasantly reclined driving position, which didn't compromise the A3's strong visibility.

It didn't lack headroom upfront or in back, where there was just enough space for me, a Totally Six-Foot, What Are You Doing With That Tape Measure dude to sit comfortably—I'd be less certain BMW's offering, with 1.2 inches less rear headroom, suffices. 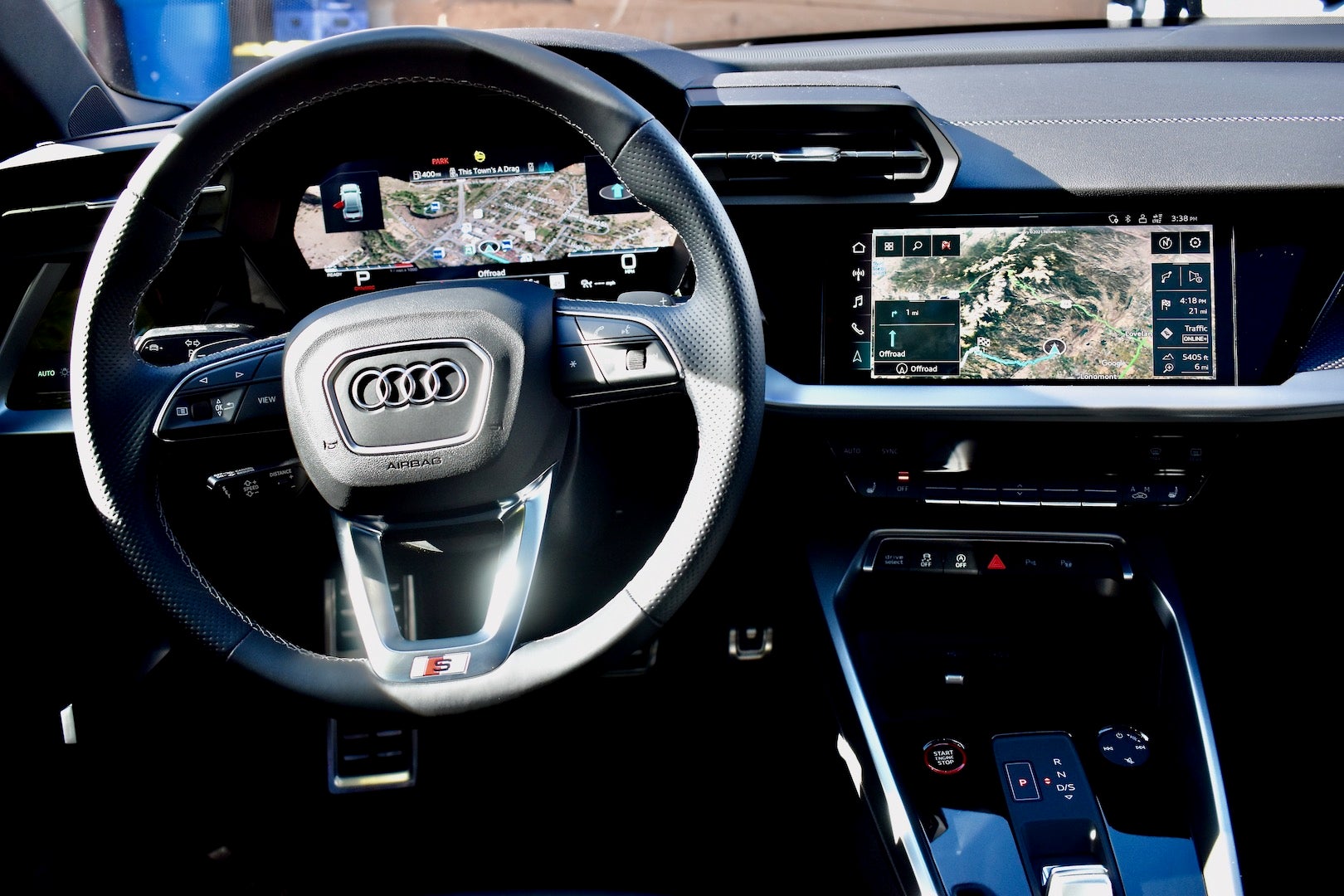 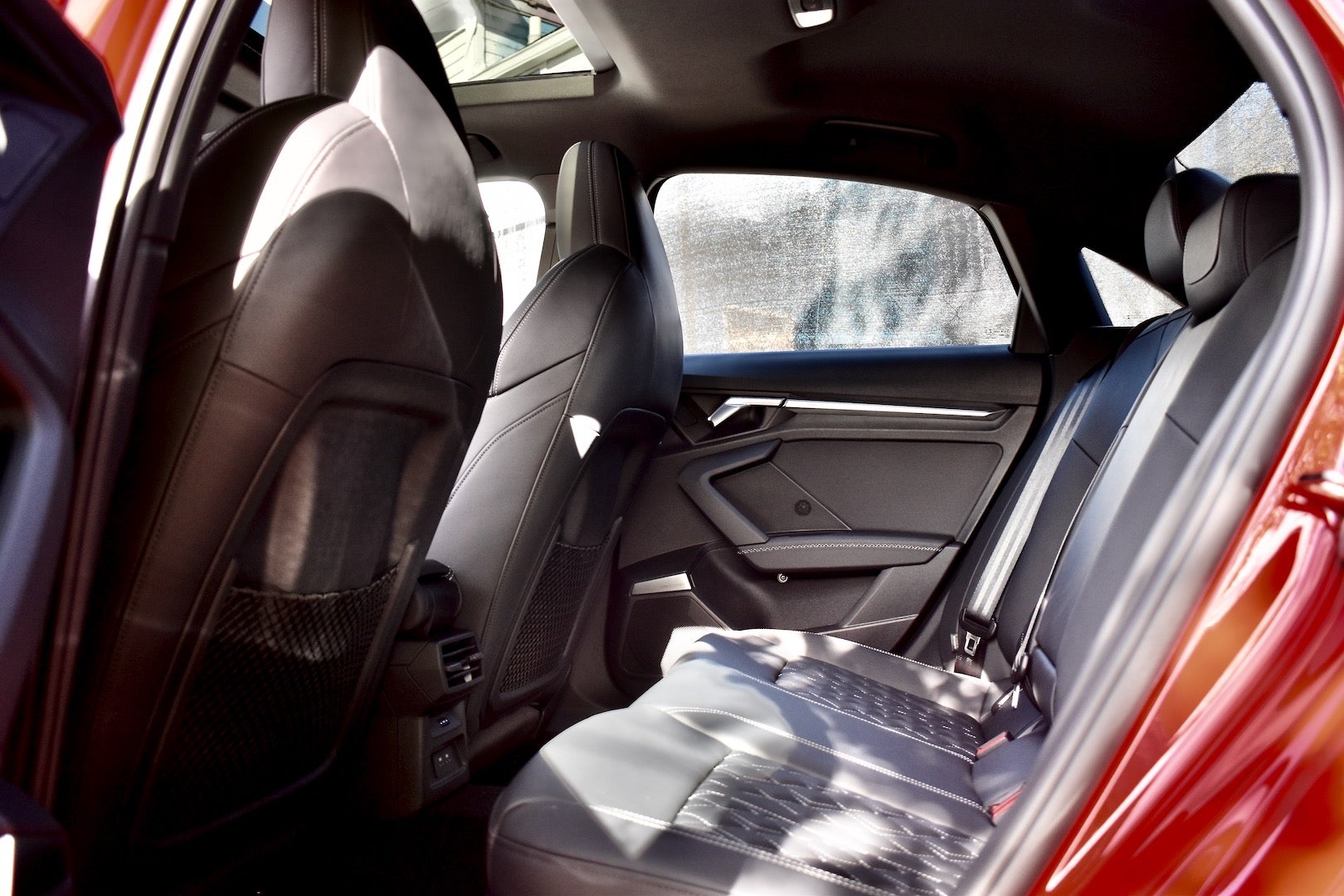 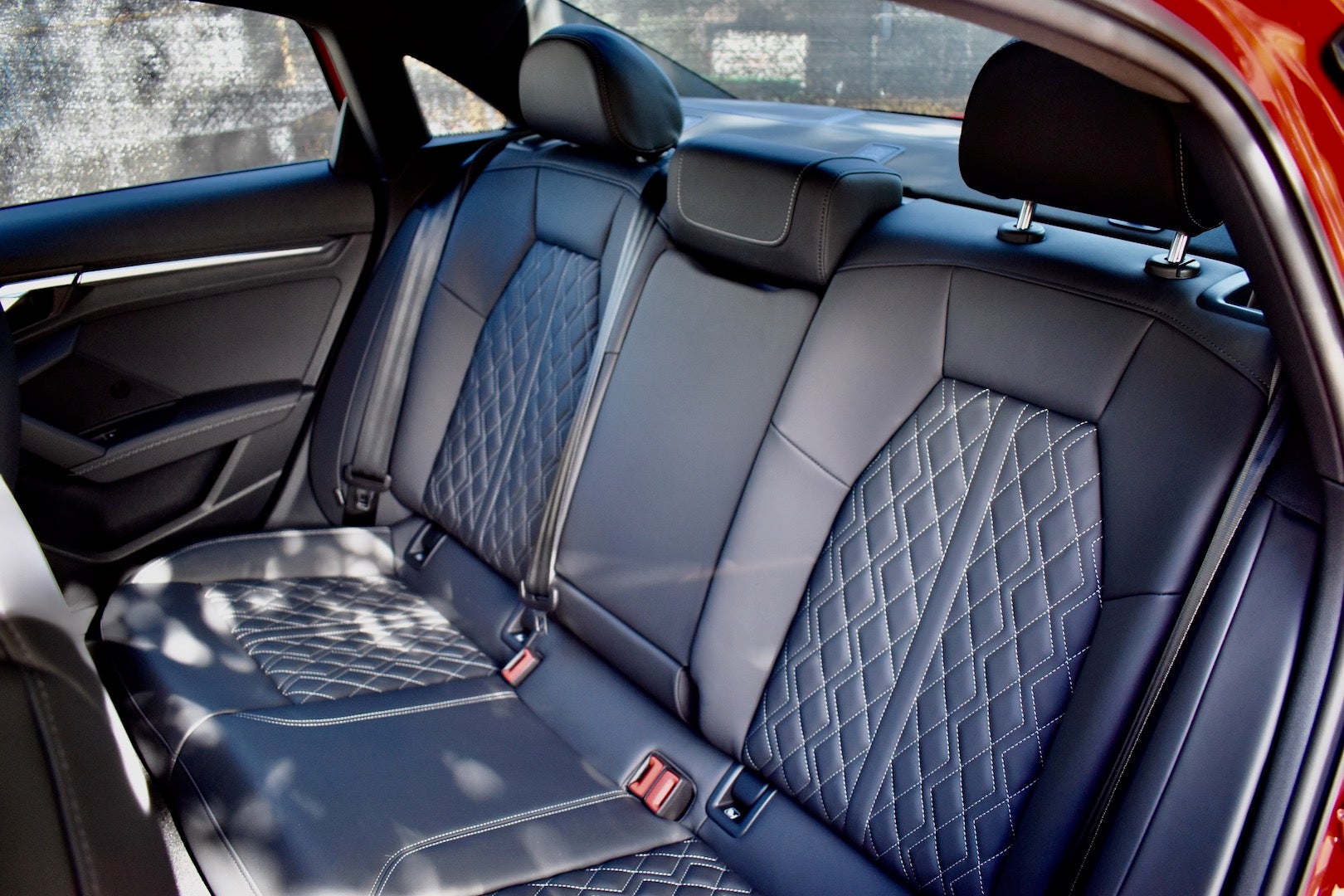 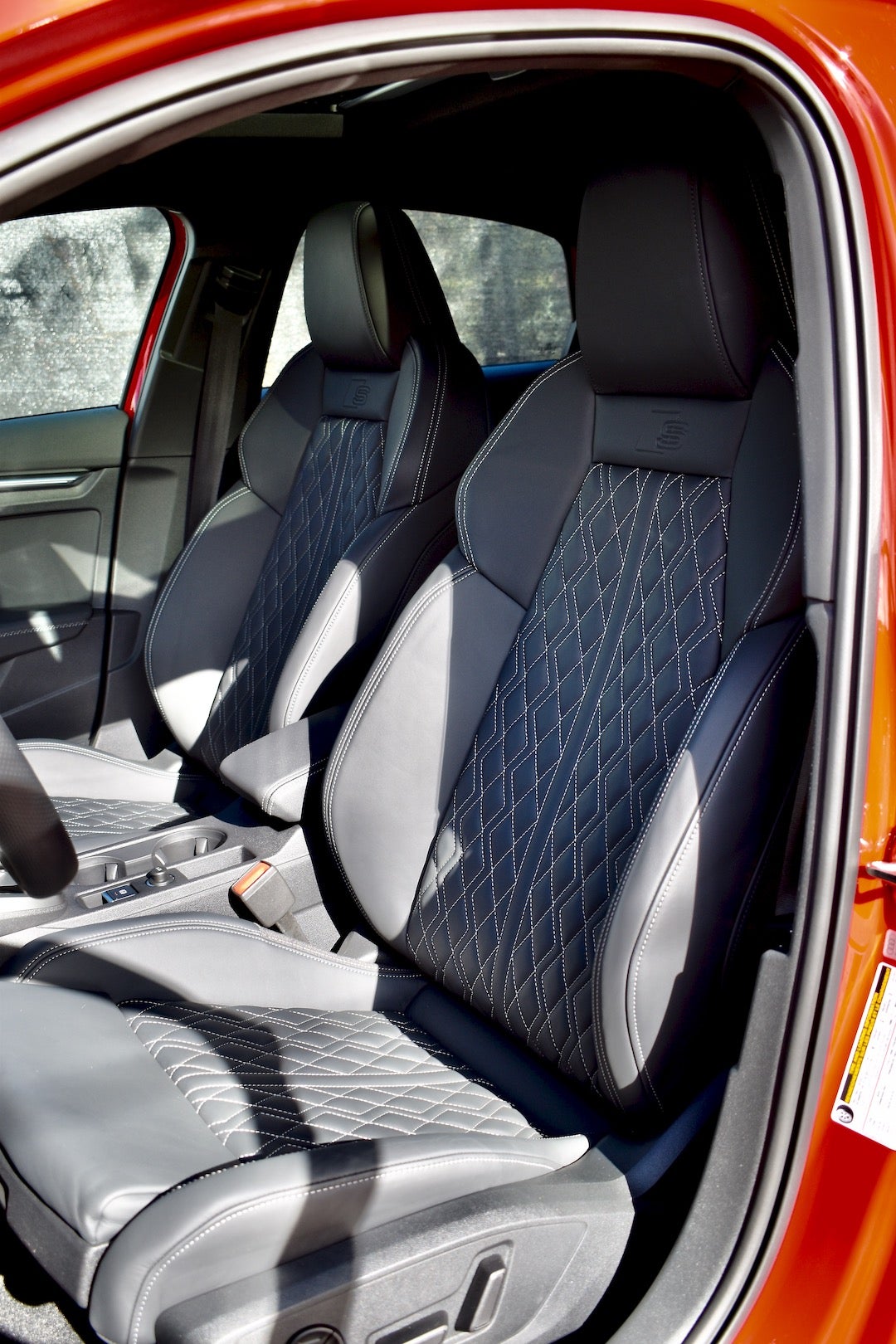 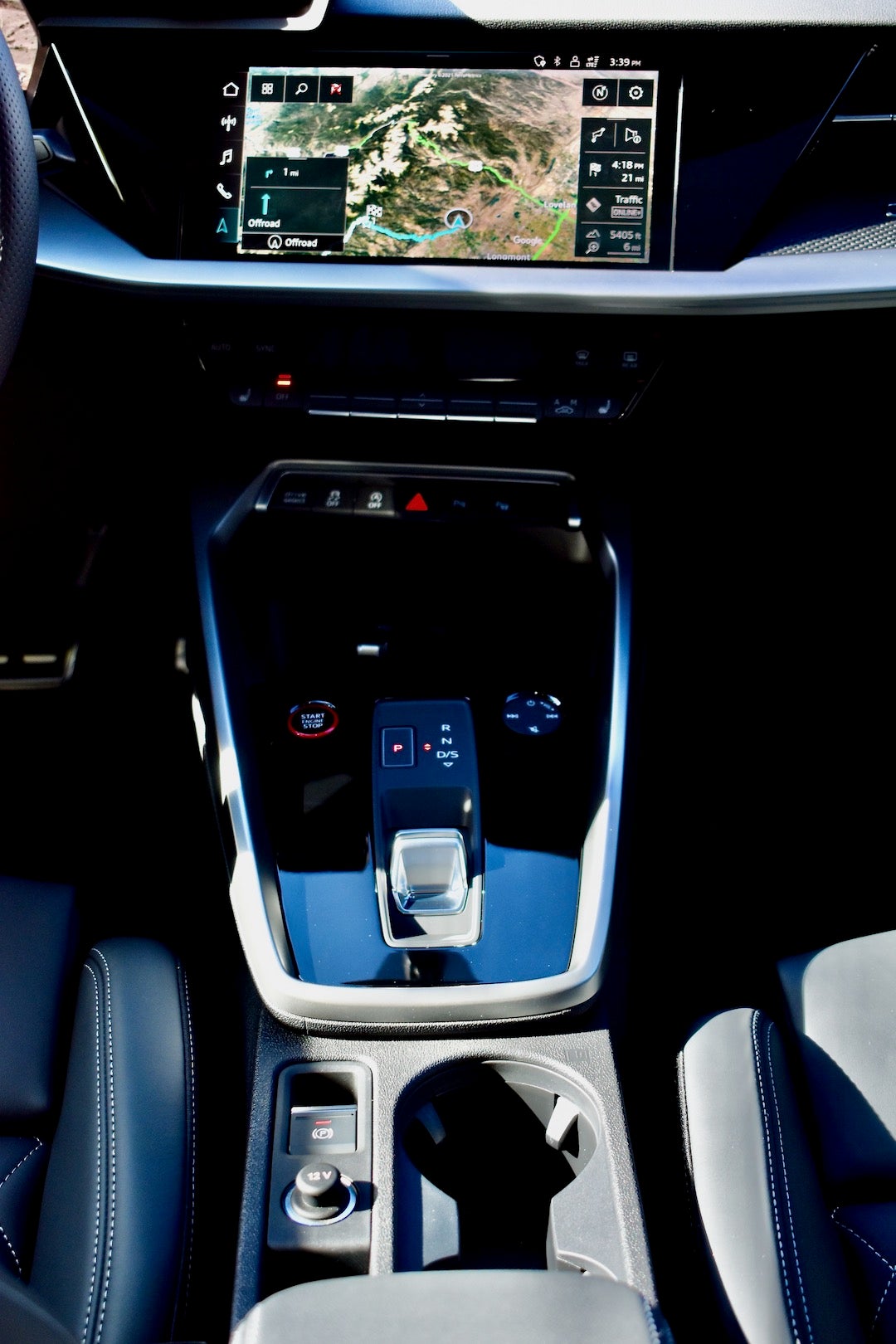 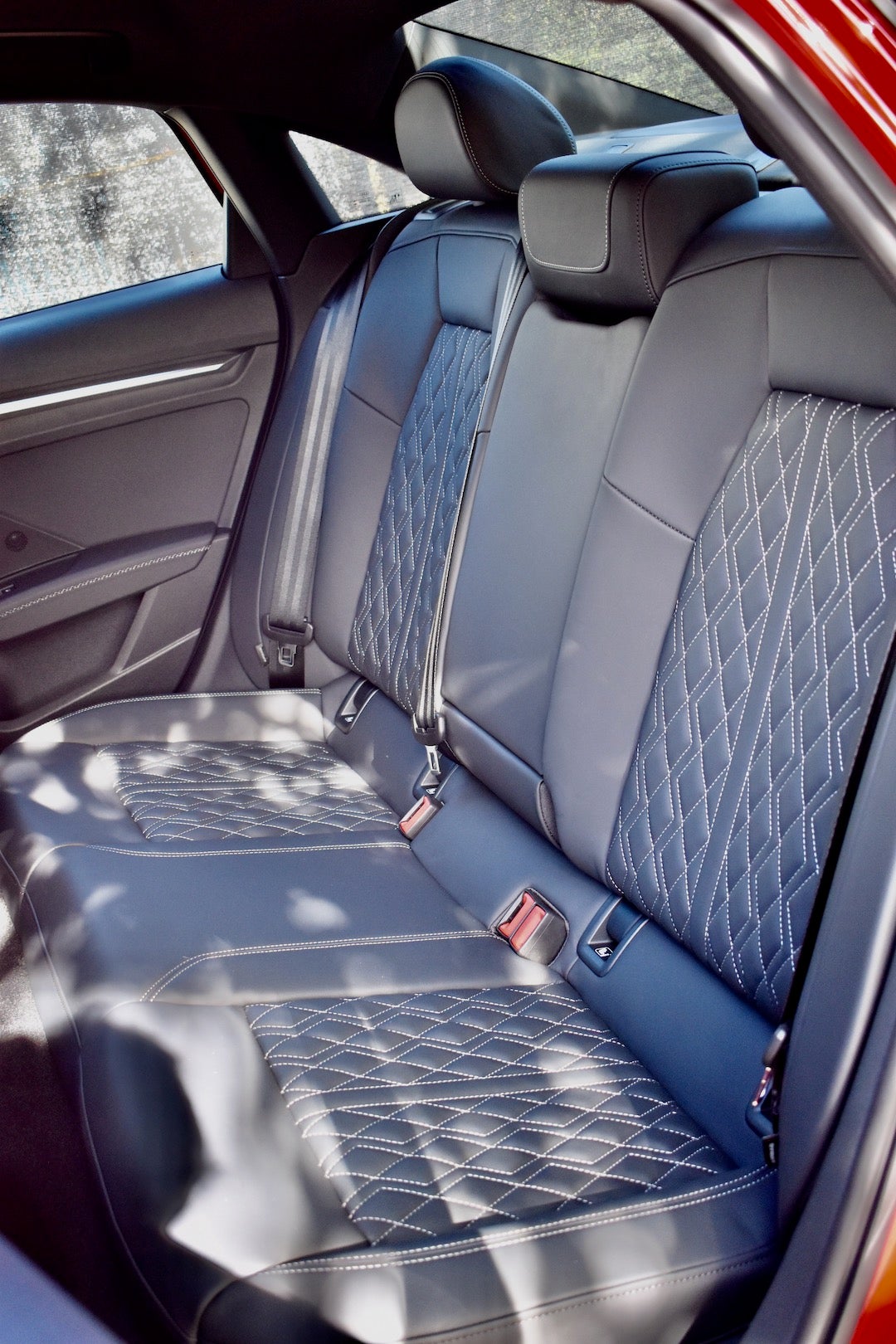 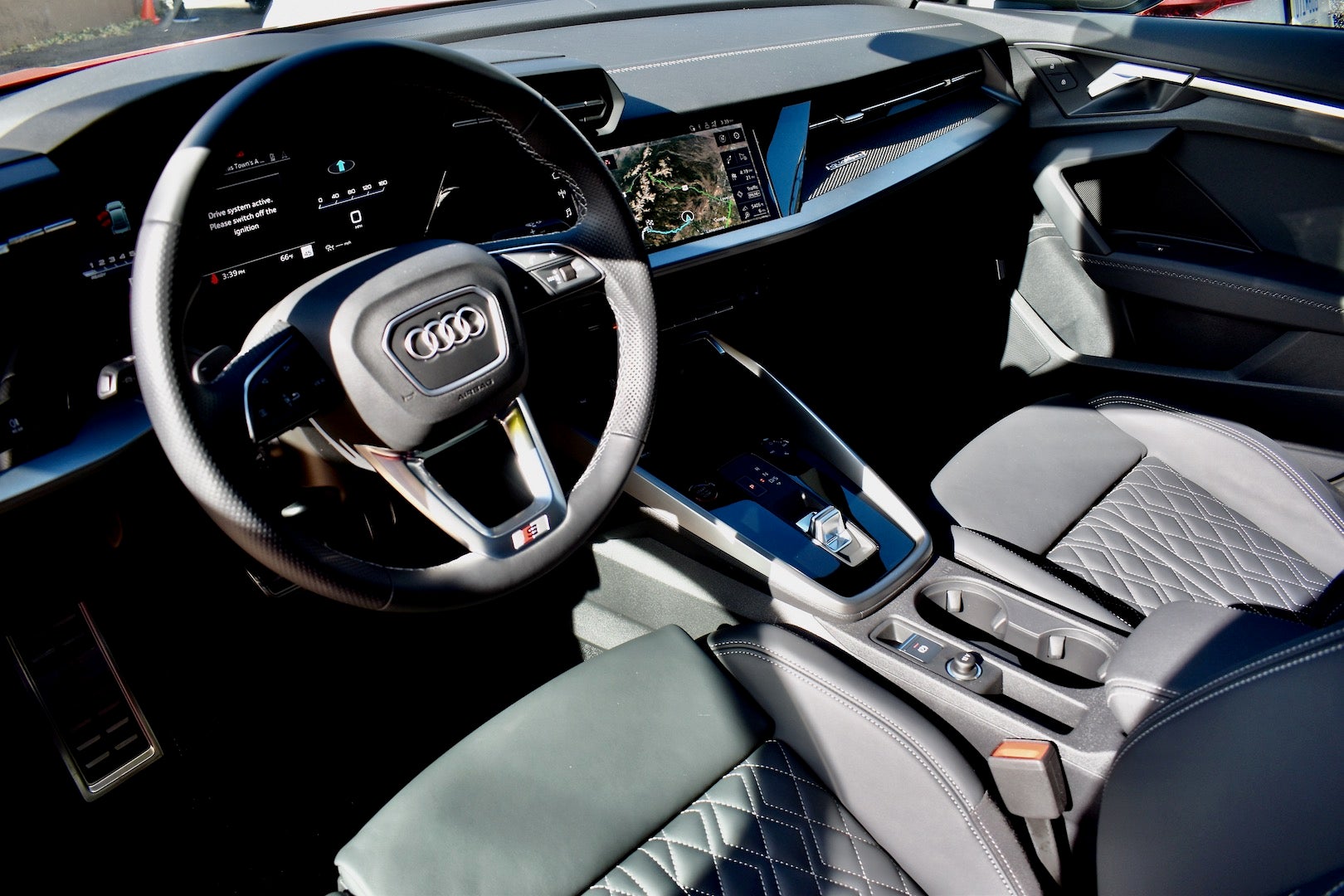 Rear legroom was also surprising, though despite being the widest car in its class, the A3's back seat is the narrowest, even if only by a one-inch margin below the largest (the Benz).

Miscellaneous storage space is also nothing special, with a small center console, and door pockets that might not hold the biggest bottle you've got. The Audi did, however, have a phone clamp for pairing wirelessly to its Apple CarPlay and Android Auto-compatible infotainment, whose killer B&O sound system couldn't have been better suited to the mournful grandeur of M83's Oblivion.

Its output was unchallenged by outside noise at highway speed, which I measured in the whispery mid-50s decibel range, out about the level of a quiet office, according to Encyclopedia Britannica. Most of what I did hear came from the tires, which on the optional larger wheels rode firmly, but not unpleasantly so, and sharpened the A3's already commendable handling.

Audis may be infamously nose-heavy, but some tactical body roll up front meant the A3 stayed compliant far past the point where I should've stopped cranking the wheel. This is creditable in part to the four-wheel brake vectoring, which will drag your dumb ass inward, even on the plain-jane A3.

Corners aren't the only area where the A3's performance surprises, as its hybrid drivetrain makes it lunge forward from a stop in city driving, and highway passes a trifle—not always something you can say about cars with full-time AWD. Rarely can you report such good mileage, either, as after a spirited drive through Colorado's Rocky Mountains, over which the A3 estimated 32 mpg, or one more than the EPA estimates.

More memorable, of course, was my trip in the opposite direction in the S3, slotted into Sport mode, which stiffened its dampers to brace for bombastic cornering.

Pitch the S3 into turns, and its steering weights up enough to make you feel like you're working as hard as the car. I can't comment on its feel beyond the limits of front grip, though, as I didn't find that. Instead, I found the A3's unwillingness to understeer even more pronounced in the S3, giving it the potential to pivot on its nose in a split-second moment that I was glad to have the stability control keep kosher.

Because I didn't screw with the traction control, I found the S3 at times to be overly conservative with throttle application, presumably to prevent scrubbing wide under power. It could've been more lax to make the most of its 2.0-liter turbo engine, whose power delivery intensifies with the rise of its revs. Its seven-speed automatic, though otherwise docile, shifts snappily on command, letting you hang on to the S3's theatrical, five-cylinder-like growl to redline.

The noise is just that, an act, amplified by a "soundaktor" that doesn't get noticeably quieter outside Sport mode despite the closure of exhaust valves. It's almost like the S3 is trying to fill the boots of the upcoming RS3, which it definitely doesn't need to; it's still got a character of its own. Besides, between its maneuverability, power, and those drilled rotors (more resistant to overheating), I'm certain the S3 would still make a great pal for track days.

The A3 and its competitors the Mini-derived BMW 2 Series Gran Coupe and Mercedes-Benz A-Class are highly comparable on all fronts, from trim structure to pricing, performance, and interior space. All three's FWD base models start in the mid to upper 30s and offer AWD, plus a performance model based thereon with over 300 horsepower. Price-wise, the Audi lands in the middle, but only just, coming in a mere couple hundred dollars above the A220, while the BMW starts $1,750 pricier.

Audi justifies this one's cost with the best-in-class gas mileage on both the A3 and S3, and what seems on balance like the most usable combo of backseat and trunk space. Mercedes' backseat has slightly more head and shoulder room, but the smallest trunk and least legroom, of which Audi has the most, again, with enough headroom for most people.

The BMW, by contrast, has the least headroom by more than an inch, possibly not enough, though the biggest trunk at 15.1 cubic feet. Audi's a distant second there at 10.9, and Mercedes generally is the worst with 8.6, though the S3 loses some, and offers just 8.3.

On the performance front, the S3 is cheaper than the AMG A35 or the M235i xDrive, not to mention marginally quicker zero-to-60. Because its 2.0-liter engine is so well-supported, I suspect it's also a canned tune away from just melting its opposition, too. After that, it could take down bigger AMGs.

Other worthwhile mentions include the CLA, more or less a larger, slower, more expensive A-class with a worse back seat and a bigger trunk, not to mention Audi's own A4, whose territory upper-trim A3s intrude on. There's also the Q3, though the gains to interior space arguably don't offset its inferior fuel economy or compromised driving dynamics. 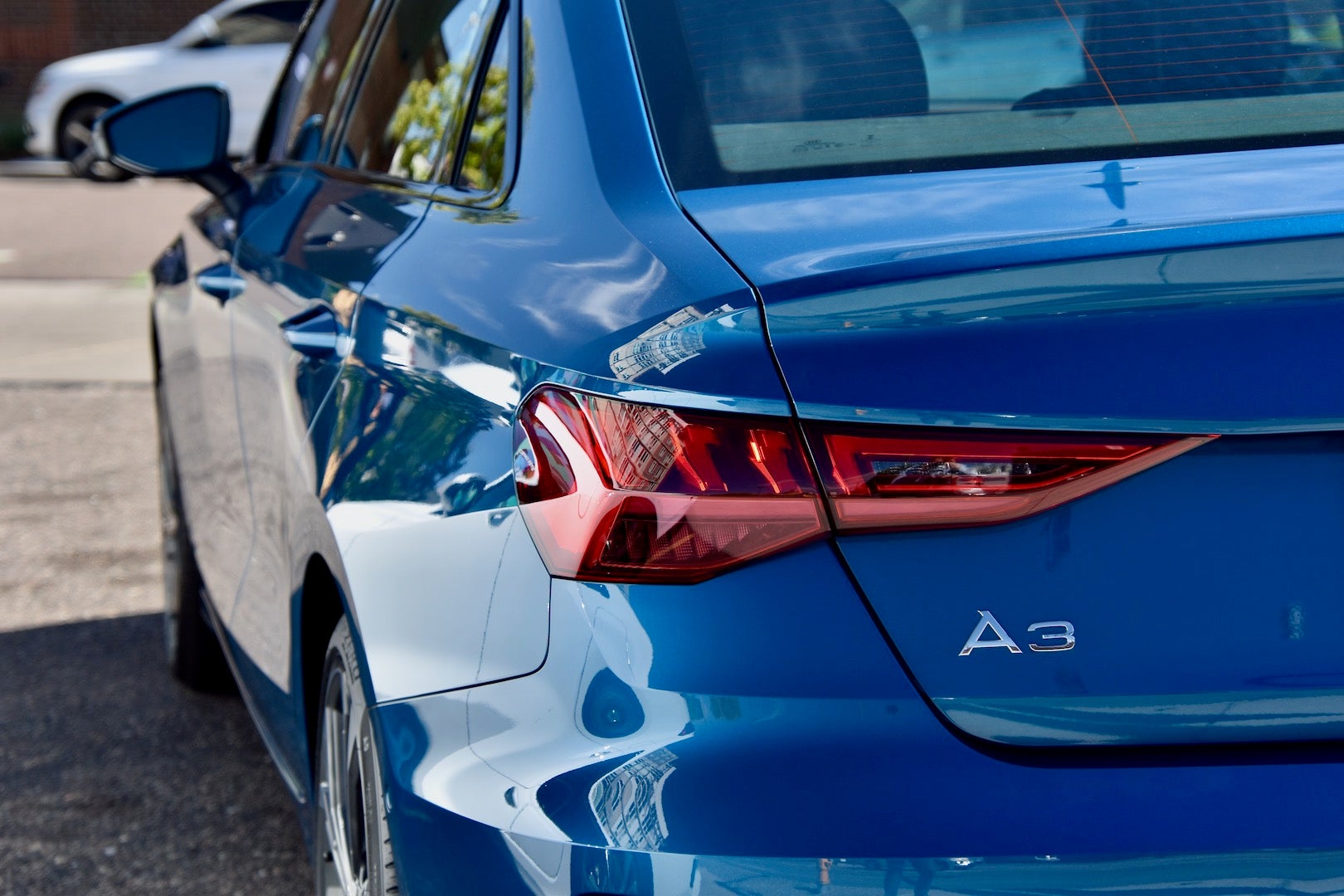 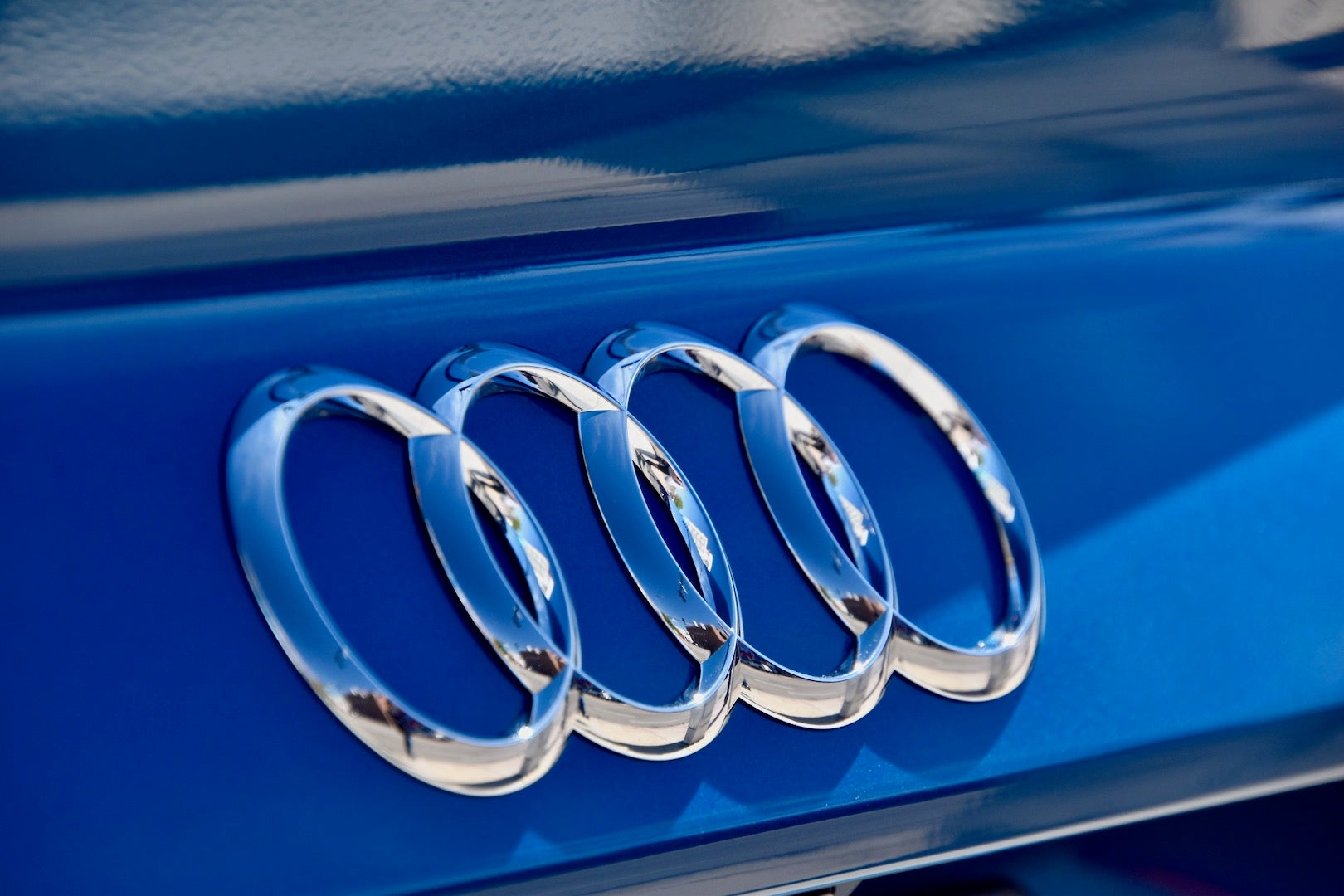 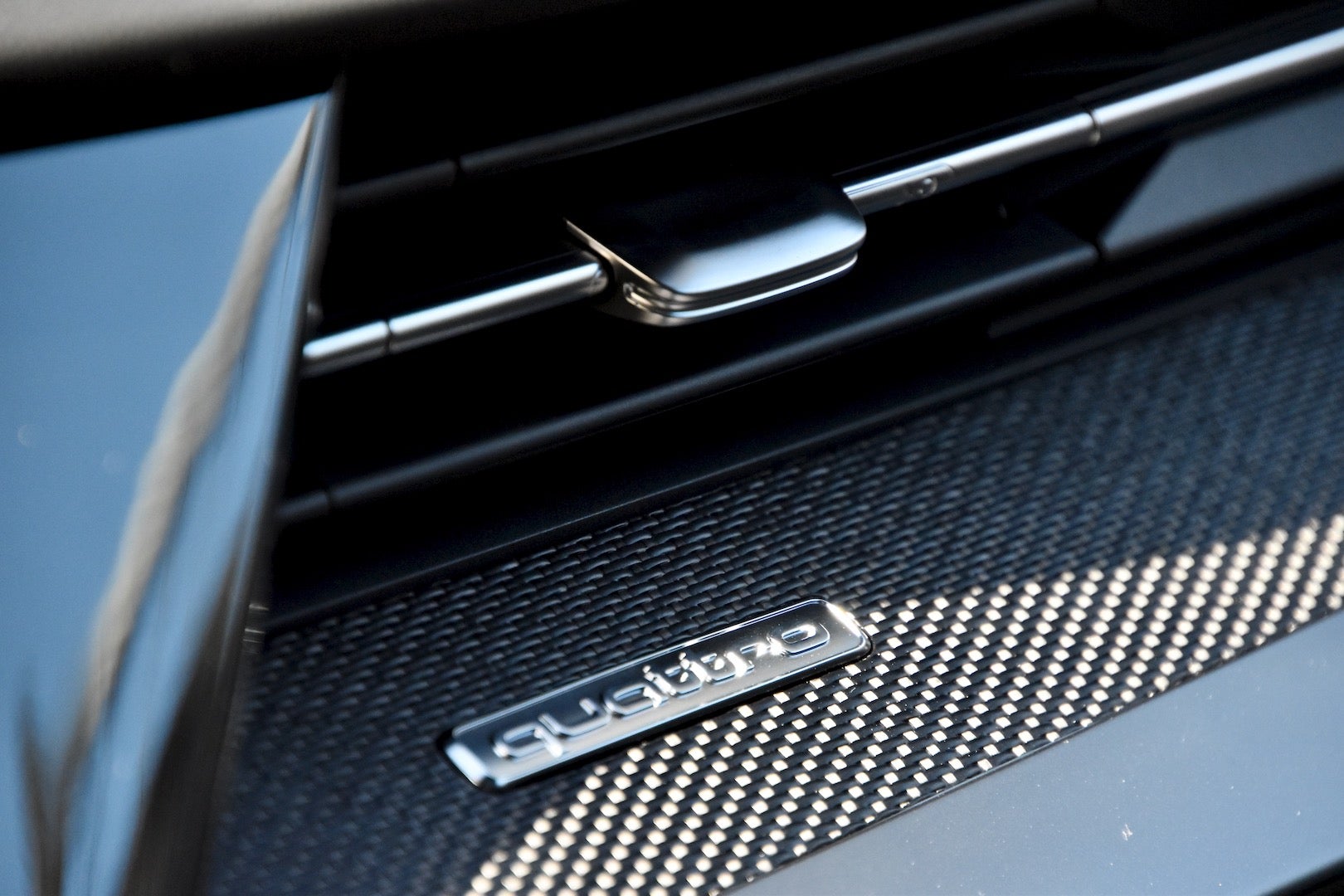 The 2022 Audi A3 and S3 each pack a whole lot to like into a small, city-friendly sedan. They're quiet, comfortable, drive pretty darned well, and in might strike the best balance of interior to trunk space in their class—the S3 notwithstanding. As with any subcompact sedan, there's a hard limit to their utility, though that can be solved by renting a pickup from Lowe's the one day a year you need one.

Besides, when it comes to choosing between spending those other 364 in a full-size pickup or an S3, I know which I'd choose.

Update: Oct. 22, 10:22 a.m. ET: This article has been corrected to acknowledge the difference between Audi's Haldex- and Torsen-based Quattro all-wheel-drive systems.