The irony of driving an electric SUV through the country with the world’s seventh-largest oil reserve is both delightfully ironic and, because it’s the United Arab Emirates, disappointingly meaningless. It's ironic, of course, because the silky-smooth Audi E-tron I’m slaloming through the dunes east of Abu Dhabi blatantly thumbs its nose at one of the key fountainheads of crude that the globe will ultimately pay so dearly for; but it's meaningless because the country in question isn’t the least bit perturbed by this supposed insult.

See, the UAE is itself working hard to reduce both its reliance and reputation on oil. It’s shifting its power generation from natural gas to nuclear and solar, as well as tapping the wind that shapes the dunes in the country’s interior; it’s also focusing its economy toward business and tourism, so it can rely even less on the black gold that lies beneath. Both the capital city of Abu Dhabi and the gleaming, skyscraper-rich metropolis of Dubai, just an hour up the road, are international hotspots—the latter in particular possessing the glittery appeal of Las Vegas as well as a penchant for the kind of innovation wealthy visitors groove on. It’s got everything from robotic camel jockeys to a burgeoning interest in electric air taxis. Rocking the casbah in an electric vehicle simply isn’t as much fun when the sharif kinda likes it.

I kinda like it, too. The Audi E-tron crossover—the carmaker's first clean-sheet electric vehicle, packing a base price of $74,800—glided effortlessly over the pristine roads of the UAE with the kind of propulsive confidence we’ve come to expect from premium electric cars such as Teslas and the more recent Jaguar I-Pace. Its twin electric motors, wrapped around the front and rear axles, together develop 400 horsepower and 486 lb-ft of torque and push the heavy SUV—5,490 pounds, with the 95-kilowatt-hour battery alone making up 1,543 of that—up from nothing to 60 mph in less than six seconds. Maximum range isn’t confirmed yet, at least for the U.S. market; by European measurements, however, it scores 248 miles on a full charge, and the production versions we drove in the UAE during the E-tron's global launch were consistent with that estimate. It’s a good bet, though, that final U.S. numbers will land around 200 miles—not great, but good enough to make range anxiety vanish among many customers.

But performance stats are just one small part of the picture with this new electric car. Its complex engineering and the resulting overall drive experience are the real story. The E-tron is easily one of the most integrated and sophisticated EVs yet developed, with systems synced up with each other in ways that few electrics—and certainly no internal-combustion vehicles—have achieved, continuously balancing performance and efficiency and distributing electrical power to suspension, motor, braking, and transmission duties with lightning speed. The electric Quattro all-wheel drive system—so fast and well-modulated that it’s the only EV that permits complete deactivation of traction control—relies on advanced cooling technology as much as the motors do when drawing power from the battery. The brake-by-wire system is also an EV first, blending regenerative braking—in which motor resistance slows the car while simultaneously charging the batteries—and conventional friction stoppers at the wheels for more urgent applications like many electric cars do. But the brake pedal uses a “simulator” to generate a familiar pedal feel while transmitting brake controls electronically, though there's a conventional redundancy built in just in case the brake-by-wire system fails.

That regenerative braking system, by the way, contributes 30 percent of the vehicle’s range, according to Audi, but without the more pronounced resistance found on other EVs. This is commonly known as single-pedal driving; in its most extreme forms, the system can be disconcerting to those who don't fully embrace the idea, with the car’s nose diving deep as the motors dig in to draw power from forward momentum without the driver touching a single pedal.  Audi’s system is designed to be a more deep-tissue execution of regen, so it can allow for limited conventional brake use without that grabby oh-God-the-car's-out-of-control feel. It can still be tuned via paddles behind the steering wheel; even on a notably steep downhill, I was still able to control my speed via regen alone. But the E-tron won't pull itself to a complete stop like other EVs. To me, that’s fine—in general, I’m not particularly a fan of hardcore regen, and Audi’s version felt more natural while still generating a sizable chunk of battery life.

The 95-kWh battery receiving that juice is built entirely in-house, using 36 shoe-box-sized cells provided by LG. It provides a high degree structural strength to provide a rigid foundation for the chassis, as well as high crashworthiness, with impact forces transmitted along aluminum channels rather than into the cells themselves. The liquid cooling for the battery is the same centralized system used by the motors, just on a different circuit. It sends liquid into channels beneath the battery, with the battery heat being transmitted to them via the thermally conductive adhesive that keeps the batteries in place. This thermal management system also enables fast charging, at up to 150 kilowatts, which will enable the battery to reach 80 percent capacity in roughly half an hour. (This, of course, assumes that Electrify America—the company owned by Audi parent Volkswagen—and other charging-network suppliers follow through on their commitments to install hundreds of high-speed chargers across the United States.)

While the systems that enable the E-tron are indeed complex and about as tightly wound as they can be, the net payoff is operational simplicity, rather than operational complexity. You don’t need to futz with regenerative braking paddles to get great returns, nor do you need to fret about different drive modes unless you really want to. Just place the Drive Select system in Auto and let the computer sort everything out. (Though when doing the kind of light off-roading the E-tron is capable of, it’s best to select the specific mode for it, as it increases ride height up to two inches. Same with dynamic driving, the mode for which unlocks brisker acceleration.) Ultimately, driving the E-tron is refreshingly carefree—and surprisingly fun. It can handle reasonably well in the turns, and certainly accelerates out of them with respectable energy. The car is balanced and poised, not easily flustered, and it doesn’t feel nearly as heavy as it actually is.

Inside, the E-tron is roomy enough for five adults, and its cargo capacity nearly matches that of Audi’s slightly larger Q7. The interior design is smart and clean, with Audi’s new MMI infotainment system commanding two large screens in addition to a user-configurable central display. Most interactions occur via the touchscreens, and what physical buttons there are on the dashboard are minimal. The EV has a healthy complement of safety alerts and driver assistance systems, including an adaptive cruise control that will modulate speed based on the road profile ahead as well as local speed limit changes, and also brake down to a complete stop then restart again in stop-and-go traffic.

Notably, the only major problem I had with the E-tron involves a feature we won’t actually get in the United States: the virtual side mirrors. Much has been made about this system, which replaces larger conventional mirrors with streamlined external cameras that provide rearward views on internal displays mounted in the door. They produce less external drag and wind noise by minimizing the familiar extrusions to something that look more like tiny whiskers than the big warts we’re used to. I experimented with the system during an off-road-only preview in October in Namibia, and found it problematic for a variety of reasons—including an unnatural viewing experience and too-dim displays—but wanted to hold back full judgment until driving the final production version on the roads. Now that that’s happened, my opinion hasn’t changed. It’s just not ready for prime time. Audi's virtual side view mirror system lacks clarity, detail, and the ability to react sufficiently to changing extremes in lighting conditions. The display positioning is also problematic, being too low on the door. Owners might get used to it, but people borrowing the car will have great trouble adapting—and that alone is a significant safety drawback. The next generation will likely be much improved, and for now, we can take solace in the fact that—for once—the sluggish U.S. regulatory process has produced an unintended positive consequence: delaying potentially great enhancement that actually does deserve delay.

I have no doubt that those tiny cameras contributed to the low levels of wind noise I noticed while driving at speed in the UAE, but then again, the car is designed for low wind and road noise. It has considerable sound-deadening insulation built into the structure in key places, keeping noise and vibration to a minimum. Couple that with the pleasantly muffled whine of the electric motors, and you have one of the most comfortable and acoustically enjoyable rides on the road. After a full day’s worth of driving, I felt none of the psychological fatigue that conventional cars—and even EVs not quite as streamlined and sound-deadened—inflict on their occupants.

Stylistically, the E-Tron is a sleeker and crisper alternative to Audi’s relatively staid lineup. It possesses numerous visual cues that it’s something special—namely, an assortment of horizontal strakes in both the lighting and the trim pieces—without screaming its EV nature the way, say, Teslas do. The color options—including a rich red, a surprisingly nicely tuned beige, and a pale blue—are in my mind the most distinctive of any of the vehicles in the Audi lineup, including its sporty RS models, and they lend the cars an even more modern twist if you’re bold enough to opt for them.

Indeed, under the harsh light of the UAE’s desert sun, the cars looked fantastic—and felt fully at home in the newly energy-progressive nation. As that vibe continues to take root around the world, including here in the U.S. where the car goes on sale early next year, there could be many thousands of owners who go all-in with the E-tron. They won’t be disappointed. 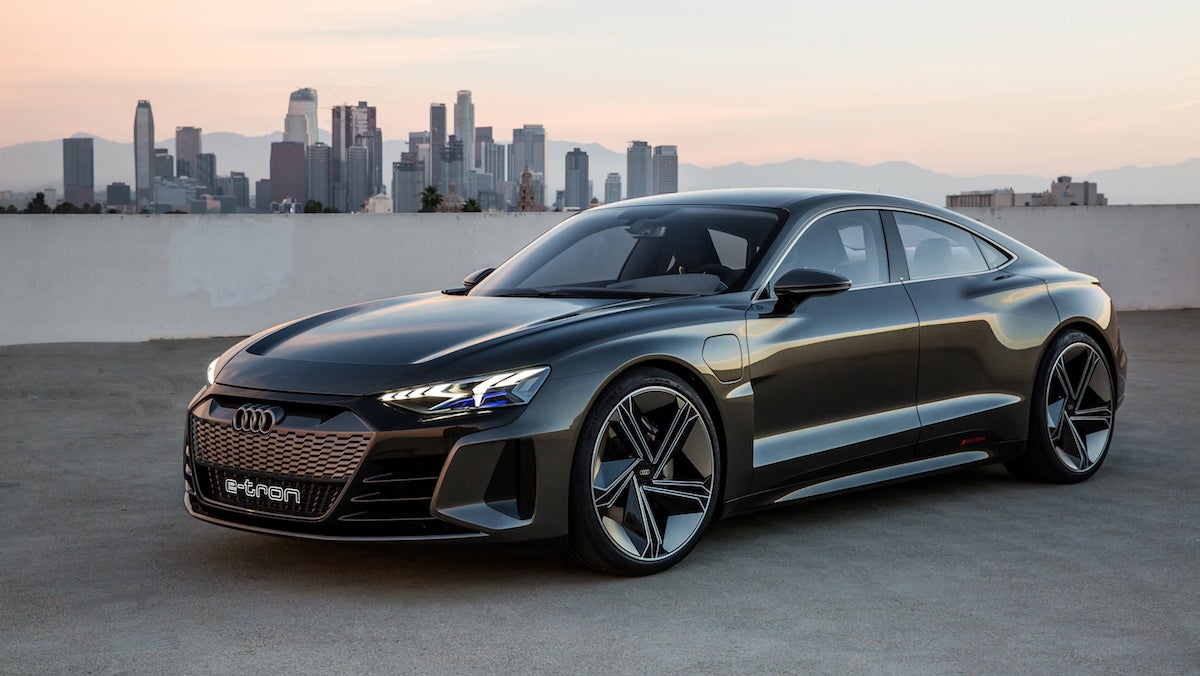 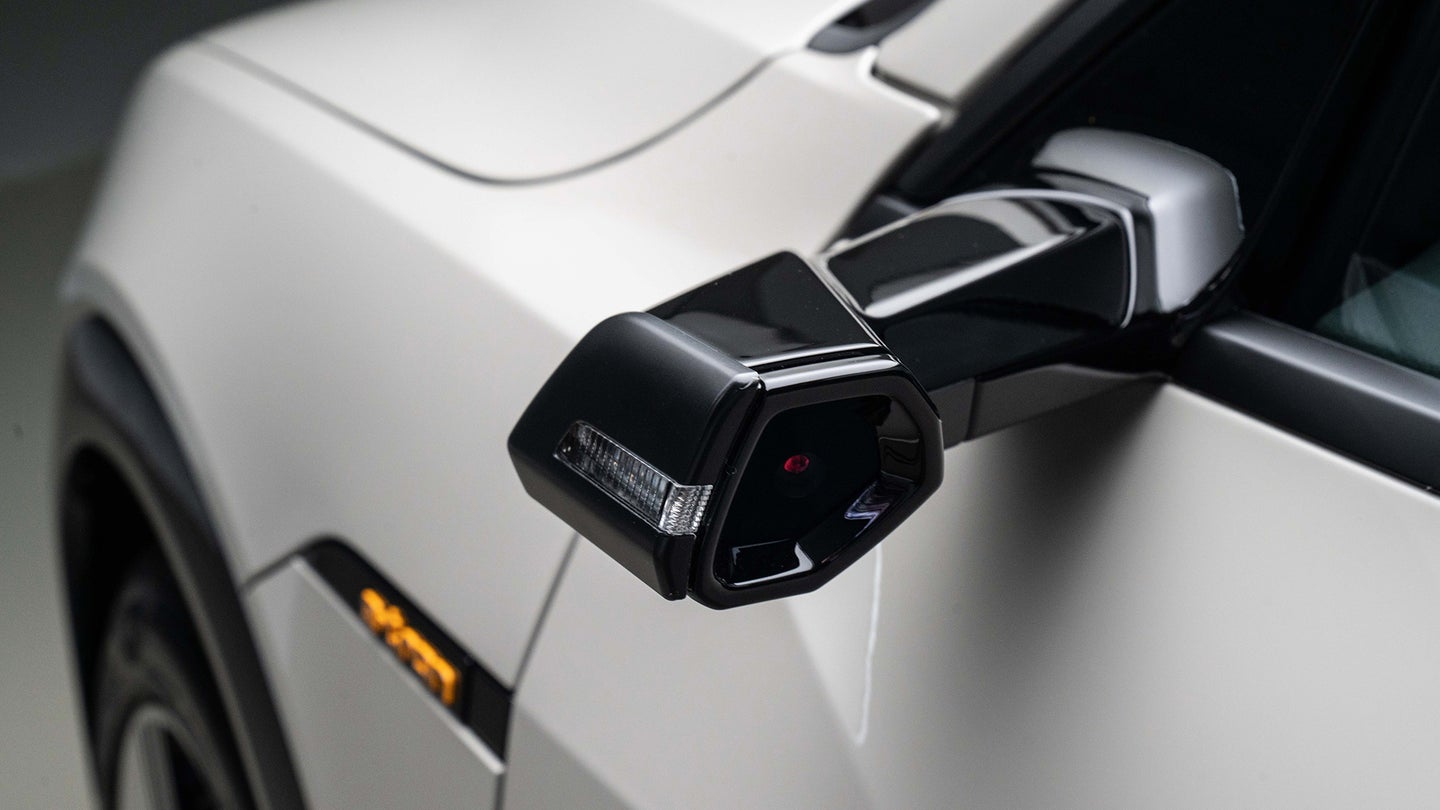 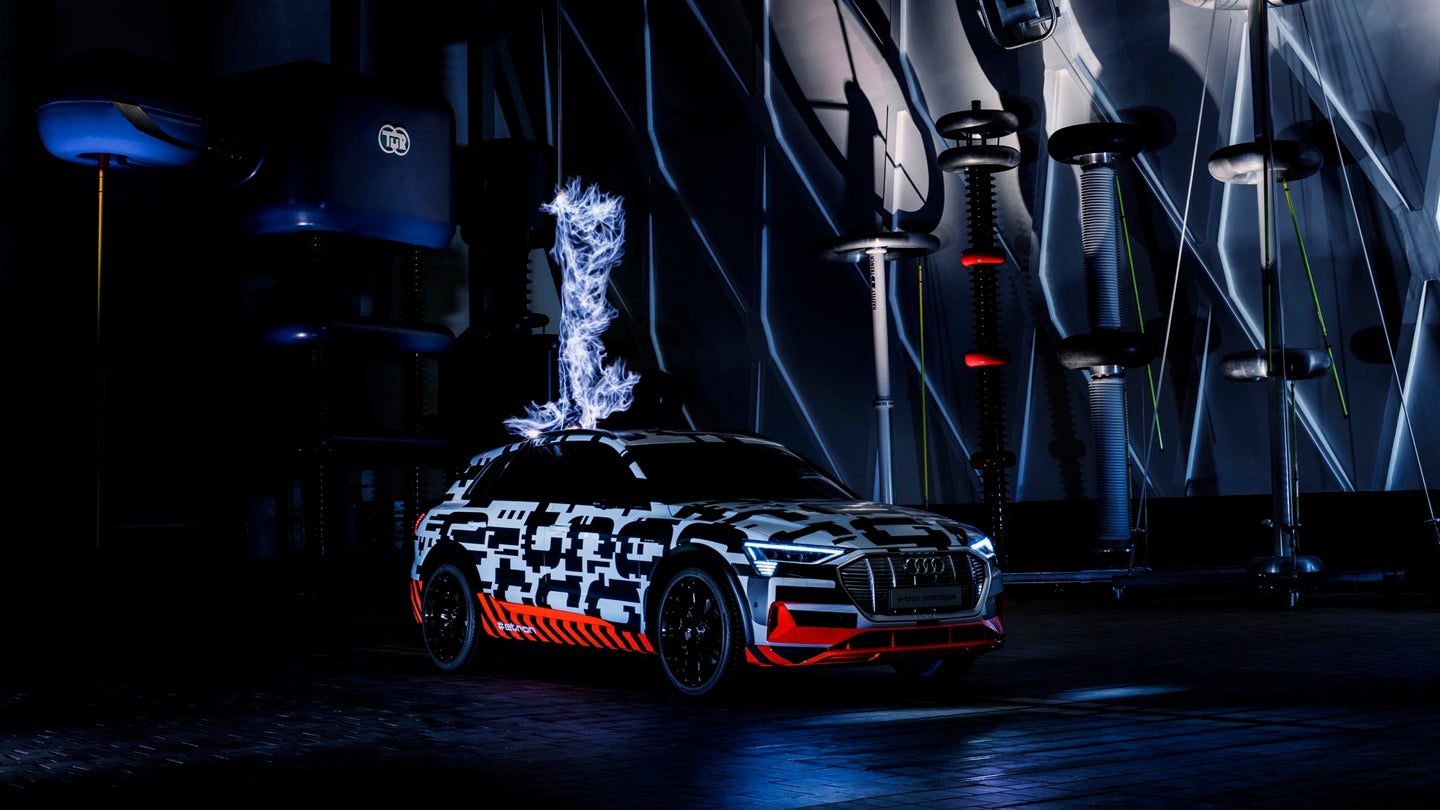 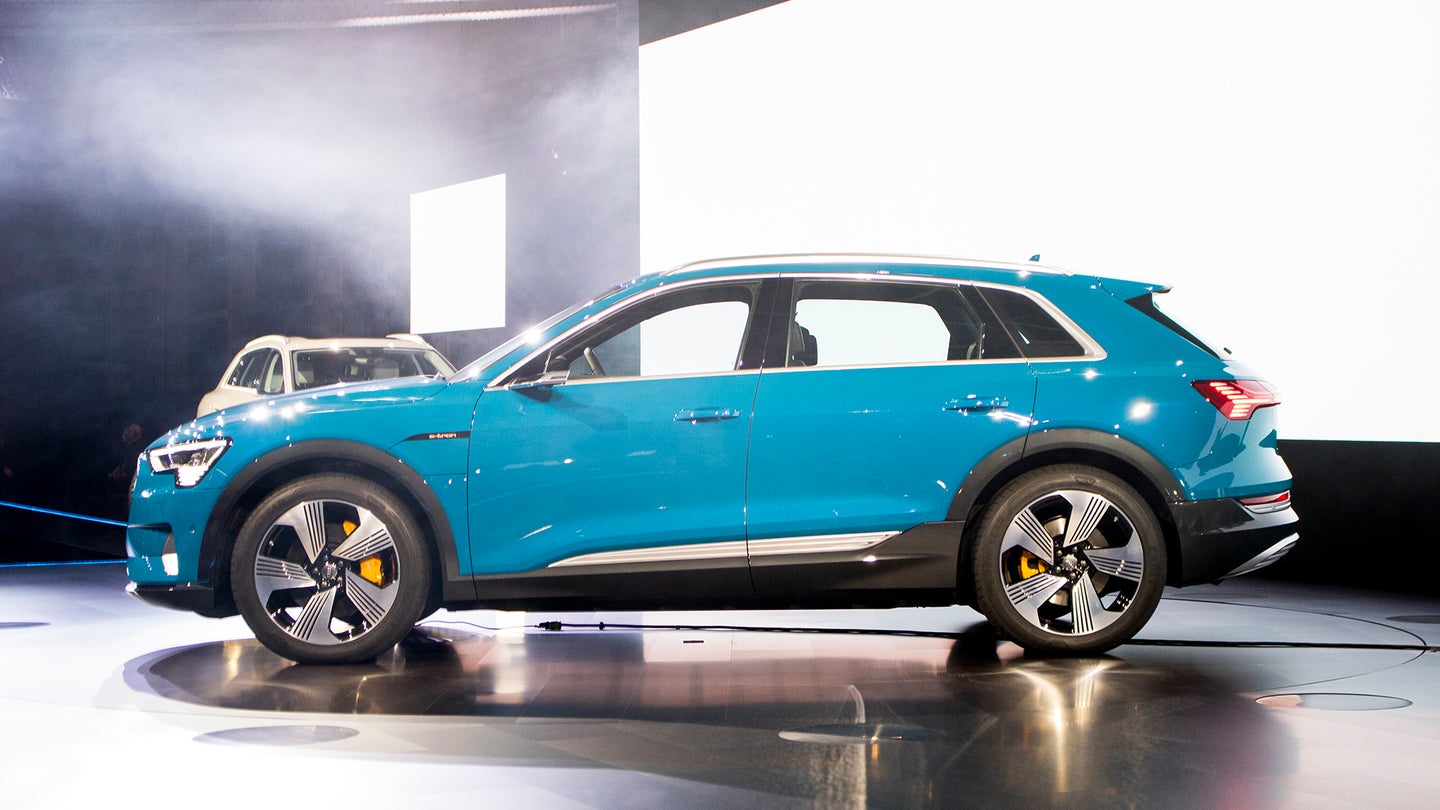 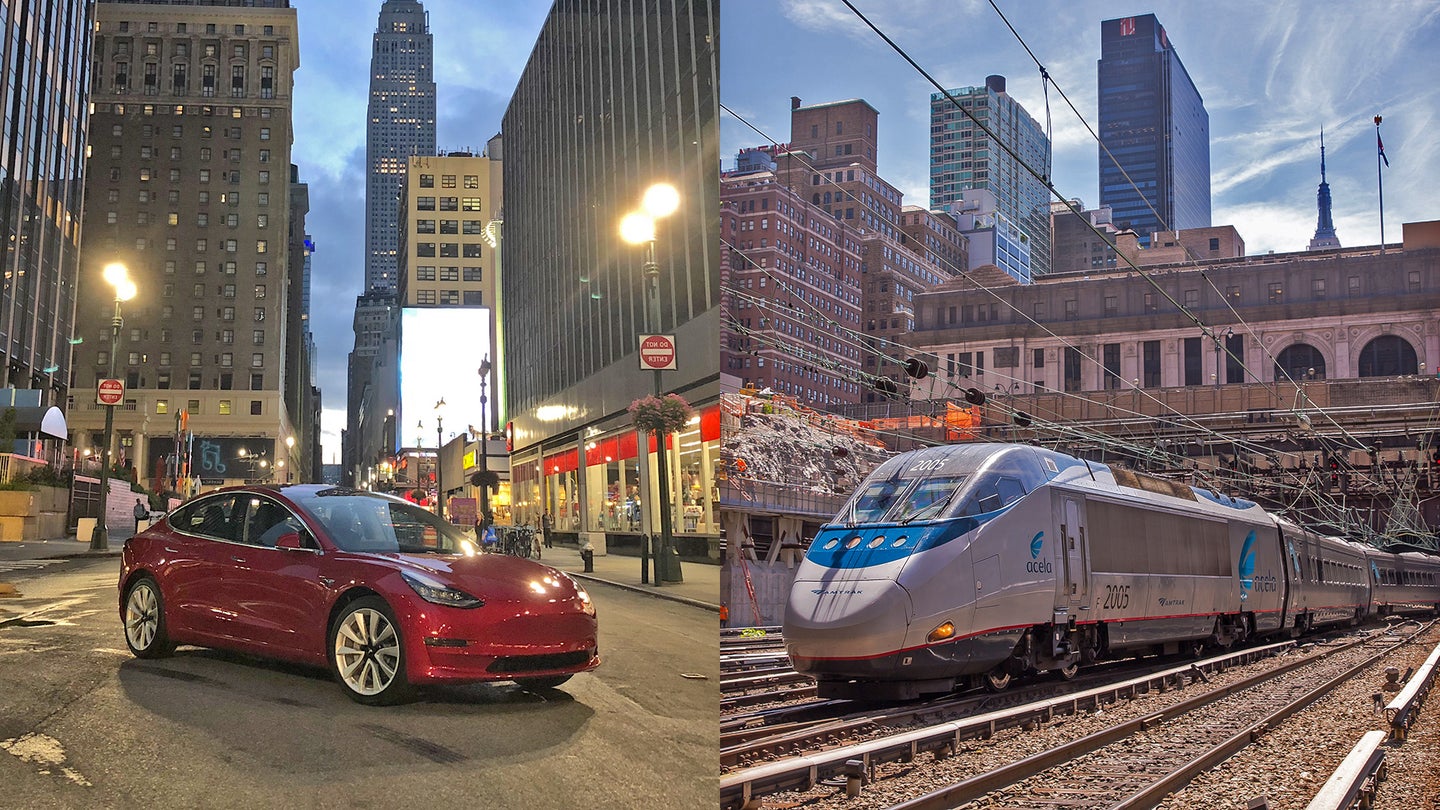