Rolls-Royce's new behemoth SUV feels every bit like it belongs in the company's lineup—and off-road alongside Range Rovers. 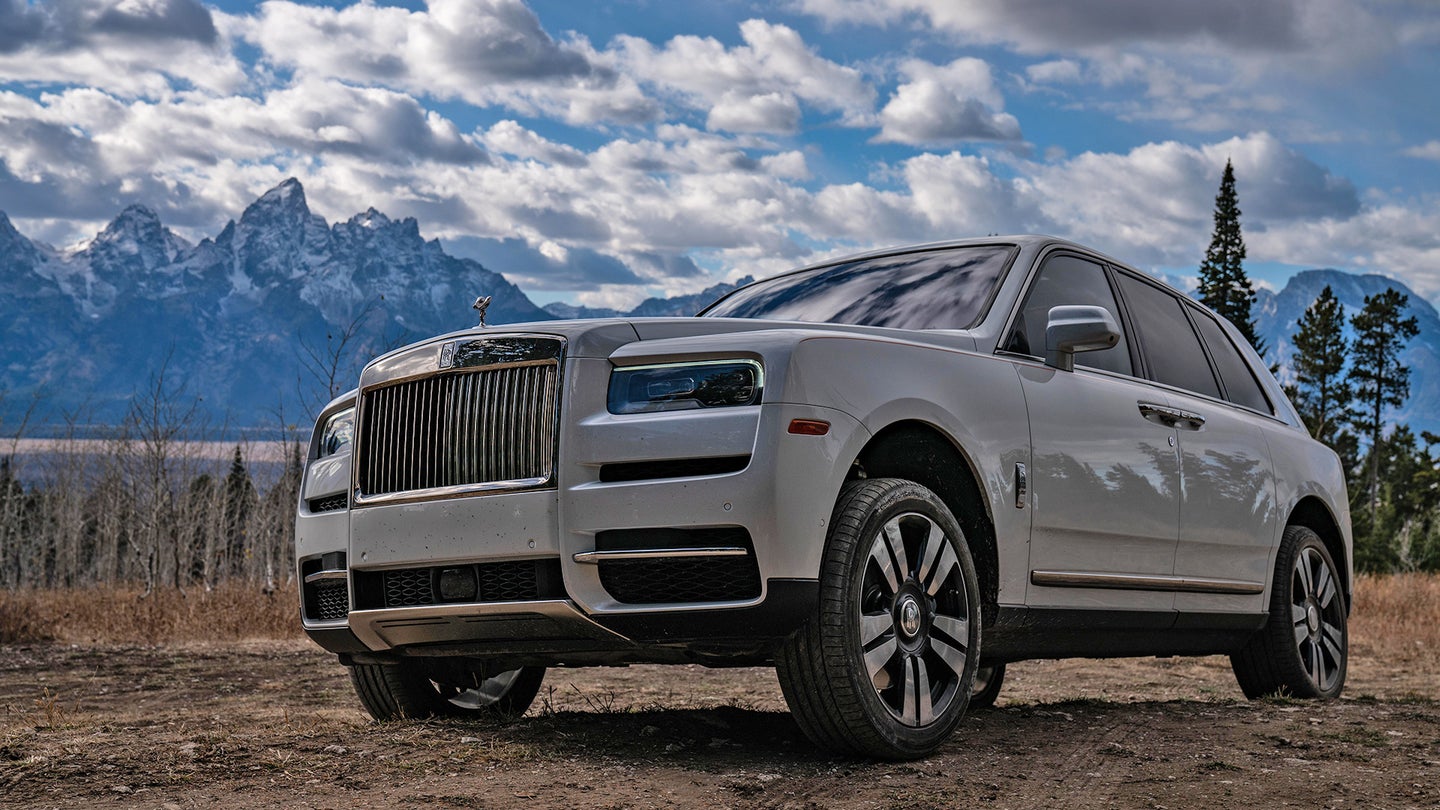 Many years ago, I went to  racetrack in West Virginia to help crew for a buddy racing in a Formula V weekend event. For three days, we grilled hot dogs, slogged through mud to reach the showers, and crashed in his nasty, many-former-owner RV. Our girlfriends gamely ventured out from the city for a night to cheer him on. I vividly remember seeing my friend's significant other returning from the bathroom on Sunday morning carrying a black and white Coco Chanel clutch as she navigated up a craggy dirt road to the RV—the purse’s black logo, stark white leather, and chrome piping practically begging for open mockery from the sidelines. Yet she seemed not the least bit concerned about such a possibility; she hiked up the hill as confidently as any of the racetrack riffraff around her.

The scene jolted back as I wrestled a gleaming white, chrome-trimmed Rolls-Royce Cullinan SUV up a steep, dusty trail in Jackson Hole, Wyoming, its shiny Spirit of Ecstasy hood ornament leading the way like an earnest, oblivious golden retriever. Our car, of course, was the Coco Chanel clutch—an absurdly out-of-place presence amid the earthiness of Jackson Hole, ripe for ridicule. As I made my way along, one of multiple Cullinans parading up the trail, I passed many hikers—most of whom waved cheerily as we greeted them through open windows, clearly amused at the sight of prim British luxury cars scaling a ski slope. One woman, however, wasn’t having any of it. A sidelong glance was all the eye contact she could muster in her contempt. As she passed us, she let out a muted, sneering phrase: “Just go home…”

Our hiker friend—acutely aware, as most were, of Rolls-Royce's obvious presence in town—presumably saw us either as interlopers on her jewel-like turf or dilettantes unworthy of the setting in our ostentatious glitter trucks. Or, there could be an even more direct read of her reaction: There’s no way that this flashy SUV is a legit off-roader, so scram. Either way, I suddenly felt like I was driving a wedding cake straight up the slope. I tried to figure out how I could possibly fit in, with this machine, in this context. Drive a bit more…humbly?

This sort of reaction is not a new problem for Rolls-Royce—the company's vehicles are a global symbol of success and status, designed to project precisely that—but it was the first time I’d experienced such spite first-hand in any car. In my view, it’s not a particularly great quality that the Cullinan looks, frankly, laughably out of place in the rugged terrain that it can—quite capably—handle. But Rolls-Royce also readily admits that its high-rider won’t frequently find itself climbing ski slopes or scrambling down sandy beaches. After all, once sand gets in a car, it doesn’t come out.

But here’s the other side of the coin: It doesn’t matter what people might think right out of the gate. First of all, the car is both a departure for Rolls—both functionally and mechanically, as it’s the brand’s first all-wheel-drive vehicle—and a brand-new thing. Once the world gets used to it, it really won’t look all that silly. My go-to reminder of this for automotive fans is the fact that we all laughed our butts off when Porsche unveiled its Cayenne SUV, which became (and remains) its global cash cow. Rolls-Royce knows precisely what it’s doing: It’s giving the customers what they want—an SUV—and making it a proper Rolls-Royce.

Second, it doesn’t actually matter what people think, because the car actually can whoop the mountain’s butt. My buddy’s girlfriend at the racetrack held her own, as will the Cullinan.

Now that we’ve settled that, what’s this 6,000-pound beast like? Predictably, it delivers every bit the magic carpet experience that Rolls prides itself on. From the massive leather thrones to the plush, impossibly thick carpet underfoot—you can’t help wanting to pop your shoes off and dig in, purring like a cat as you knead the shag carpeting—to the even daintier touches, like the front and rear doors that close at the push of a button. That feature in particular is legitimately essential, due to the massive suicide doors; they're terrifically hard to leverage closed, especially once you plop all the way back into the seat—though try explaining that to that Jackson Hole hiker if she catches you closing them in the parking lot.

In typical Rolls-Royce fashion, the interior is also infinitely customizable to the buyer’s color and materials preferences.  Even the factory options are edgy and daring, with multi-hued leathers and copious chrome trim. It’s all very tasteful, substantial, and cocooning. Yet outward visibility is king, and where it’s not, exterior cameras come to the rescue.

On the road, the “magic carpet” ride typical of Rolls-Royce comes via the beefed-up air suspension, necessary to manage the SUV’s outsized dimensions and weight. The road below floats by as a distant whisper, barely noticeable inside the plush cabin. The Cullinan uses larger struts with more air volume than the other Rollers in the family to smooth out the pavement and manage the hits while off-road. A double-wishbone front axle and five-link rear axle tame body roll, which is a not-insignificant feat for a tall vehicle weighing three tons. Four-wheel-steering helps tighten up the turning radius and gives it that “hovering” quality while changing lanes at highway speed.

Off-road—where prying eyes will clearly judge this vehicle most critically—the Cullinan uses a finely-tuned all-wheel-drive system to keep the car planted and stable, whether on sand, snow, or rough terrain. (Fun fact: It actively pushes the wheels down into cavities in the ground to ensure traction.) The off-road capability comes with the push of a single button, one that raising the car by 40 millimeters and adjusting the AWD based on the terrain it encounters. A slick visual in the infotainment helps you maintain situational awareness as you navigate rock fields or tight trails, and the V12’s tremendous 627 pound-feet of torque arrive at just 1,600 rpm, solidly in diesel territory—and helping power you out of most sticky situations.

So despite what our friend on the trail might or might not have thought about the Cullinan, it has enough grunt to earn its place on the trail—as well, of course, on the boulevard, which is where these will undoubtedly spend most of their time. But there are still some things missing from the Cullinan. For all its wonderful qualities, the big guy doesn’t seem to have anything particularly special about it. It brings no magical debuts, no unique grace notes it can call its own. For instance, the Starlight Headliner—fiber-optic lights woven into the ceiling to resemble stars and constellations—that debuted on the Wraith a few years ago was a breathtakingly cool grace note. The whisper-quiet roof mechanism in the Dawn convertible was also a sublime stroke of wizardly technology. The self-leveling wheel hub logos are simple but fun, the kind of thing owners love pointing out to their friends.

There are cool features, including the two-section rear hatch called "the Clasp" and add-ons like slide-out tailgate seating in the rear. But the rest of the Cullinan’s “firsts” are familiar already—it’s the first Rolls with fold-down rear seats in "Lounge Seats" configuration, the first with a rear windshield wiper, and the first with touchscreen infotainment. Not exactly brag-worthy stuff.

Also, there are disappointingly few true advances for the driver—no automatic lane centering, no semi-autonomous highway cruising, no augmented-reality navigation tools. There are perfectly adequate safety features, including night vision, alertness monitors, camera-based visibility tools, and collision avoidance and mitigation helpers. But assistance tools—a separate category—are largely absent. Rolls-Royce seems to be deliberately keeping that sort of cutting-edge technology far away from the Cullinan, as well as its other cars. Nor is there much in the way of infotainment depth, beyond the (admittedly nice) smartphone interface and built-in navigation tech. But there are no blockbuster features—say, natural-language communication, or the hand-gesture controls from corporate parent BMW.

The reasons for these apparent lapses are three-fold: one, semi-autonomous driver aides are not perfect yet, not up to the Rolls-Royce standard for effortless, persistent use; two, there’s an assumption that many users still use chauffeurs for their vehicles, in the Rolls-Royce tradition, so buyers don’t really care about this; and three, that their customers haven’t asked for these features.

But the problem with all these arguments is, they’re archaic. The three most recent new vehicles from Rolls-Royce—the Wraith coupe, the Dawn convertible, and the Cullinan—are not only deliberately intended as driver’s vehicles, but specifically targeted toward younger consumers. You know, the kinds of wickedly upwardly mobile entrepreneurs who groove on new technology. As for the argument of their customers not asking for these features—well, who originally asked for the Starlight Headliner, or the self-leveling wheel logos? To borrow an old consumer-tech saw: The customer doesn’t know what they want until you give it to them.

This is the Rolls-Royce way, of course, and consistent with their heritage. And in an age when semi-autonomous systems are rolling out with precious little driver education about their use (and limits), I respect the company’s instinct to hold back until it’s fully cooked. On the other hand, times are changing, and so are Rolls-Royce's customers. The mere existence of the Cullinan already acknowledges this, so why not keep up with the times, even just a little bit? Lane-centering is a helpful and comprehensible feature. Rolls buyers of any generation would probably dig that.

But this is really between Rolls-Royce and its customers. If they don’t want it, they won’t get it, and it’s pretty obvious that they’re going to want this vehicle in droves. Hikers and off-road trail nerds can laugh all they want if they see Cullinans on the beach or the slopes. Bottom line is, it’s a fine machine that will likely quickly become the most in-demand model in the company’s lineup—and remain so as long as it exists.