With Start-Ups Finally Penetrating the Auto Industry, a Pair of Legacy Manufacturers Launched Their Own

With Polestar and Genesis, Volvo and Hyundai will target more upscale customers—and hope to elevate their core products in the process. 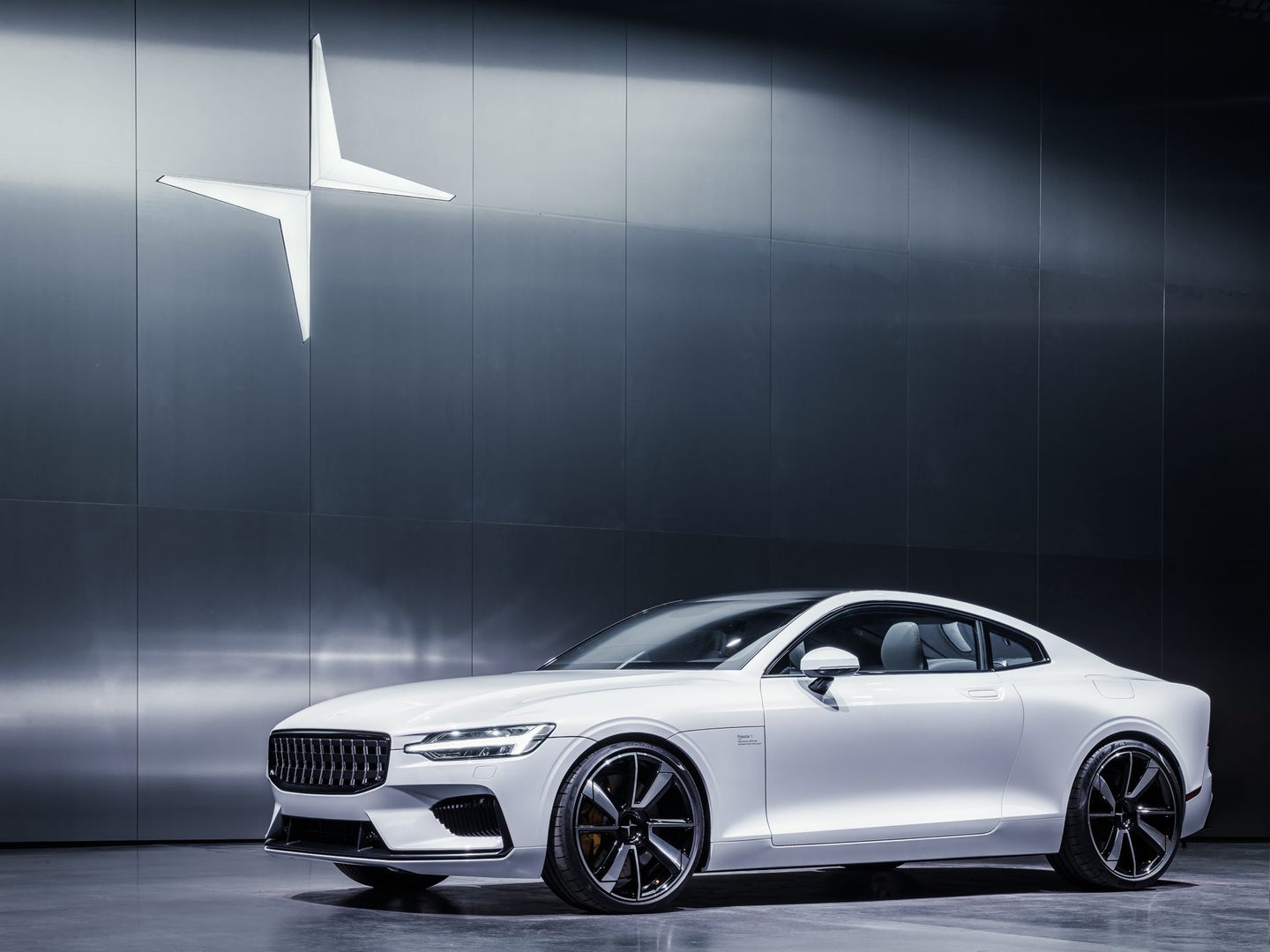 Recently, the long-immutable auto industry has, like the rest of the world, been inundated with start-ups. And well-financed ones, at that: three companies—Faraday Future, Byton, and SF Motors—have already raised over a billion dollars in capital, while capturing media attention with buzzy products that fit the Next Big Thing narrative of electric-powered, autonomous-capable modular vehicle solutions.

But questions remain. Not just whether "mobility" is the really the future, but whether these companies can viably produce such vehicles at scale even if it proves to be the case. This is true even for the largest and most established of the insurgents, Tesla, which has in recent months struggled with quality and capability in assembling its supposedly mass-market Model 3 sedan.

Two more brands have recently joined this roiling start-up category, but instead of being spearheaded by Silicon Valley wizards, they are spun off from a pair of longstanding—and recently resurgent—automakers. Volvo, the 90 year-old Swedish manufacturer known for safe and reliable family schleppers, has elevated its Polestar performance division into a stand-alone brand; Hyundai, the Korean car company known for quality entry-level vehicles since 1968, has done the same with its Genesis luxury name.

Both marques are aimed at the upper end of the car market—though Polestar, with its debut vehicle being the $155,000 limited-edition Polestar 1, will initially target an even more exclusive customer. Both companies launch with vehicles powered by internal combustion engines, but plan to shift focus to electrification: Polestar to battery power, Genesis, possibly, to hydrogen fuel cells. Both have fresh ideas for reaching their target consumers at the retail level with sleek urban brand centers, a limited dealer network, concierge assistance for servicing the cars, and direct-to-consumer retail where permitted. (In addition to sales and leasing, Polestar will also push an all-inclusive subscription option, a model lifted from the successful Care by Volvo program.) But while brand positioning is important—think of Polestar as something like a Swedish Tesla, and Genesis a Korean Lexus—having a highly experienced automaker as partner and benefactor is quality most important to long-term survival.

“In the current days of internet communication, to bring up the idea of a car brand, to portray a picture of, ‘Hm, that looks like a brand’—I wouldn’t say it’s easy, but it’s more possible,” says Thomas Ingenlath, chief design officer for Volvo and CEO of Polestar, in the company's temporary offices on the Volvo headquarters campus in Gothenburg, Sweden. A stand-alone Polestar building will open this fall.

“With any fancy agency, you can put together a webpage that looks pretty convincing," Ingenlath says. "And with EVs, the technology might not be as much of a challenge as it was with combustion engines. So developing a car might not be the greatest challenge of it. But then the next steps get more complicated. Producing that car is definitely something that, we learn and see every day in the newspaper, is not the easiest part. And getting out there with a distribution system where you actually reach a customer is also difficult. And you have to have a service connection as well.”

Leveraging the connection to the parent company is key to both brands’ roll-out strategies. Because while a desirable product may first grab consumers' attention, a car can't be instantly downloaded on an app, or readily shipped to a customer. Creating a new vehicle requires massive infrastructure investment, and a keen understanding of the manufacturing process.

“We have access to technologies that are extremely innovative. And we also have the benefit in the way that we are built as a company,” says Luc Donckerwolke, head of design for Genesis and Hyundai, outside the Genesis design studio in Seoul, Korea. This is because Genesis will have access to the supply chain for the massive Hyundai Motor Group, which gives the fledgling brand "a force that is difficult to find anywhere else, with integration in producing steel, headlamps, seats, rear lamps, or screens,” Donckerwolke says.

Access to relevant expertise and economies of scale also helps explain why the first Polestar model, the Polestar 1 (expected to arrive in 2019 as a 2020 model) will ride on a modified version of the Scalable Product Architecture (SPA) that underpins the Volvo S90 and XC90. And why the G70, first “real” Genesis model developed for the stand-alone brand—as opposed to a nameplate under the Hyundai brand—rides on a platform shared with another Hyundai Motor Group sibling, the Kia Stinger.

And while both Polestar and Genesis plan to create proprietary retail networks—including dedicated sales forces, individual showroom designs, and product specialists—aspects like vehicle servicing departments and back-office work will be shared between companies.

Essentially, anything not visible to the customer is fair game for cost-sharing, says Manfred Fitzgerald, Genesis’s global brand chief. “But for us it's very important that at the touch point with the customer, there is a clear distinction” he adds.

But even if vehicle underpinnings and service functions are shared, launching a sub-brand is an extremely expensive proposition—especially in an automotive marketplace subject to the whims of fast-moving consumer trends, petroleum cartels, and, at the moment, an unpredictable U.S. president in the middle of a global trade war. General Motors discovered this with Hummer, Toyota discovered it with Scion, and even venerable Mercedes-Benz discovered it with its first attempt to revive the Maybach brand.

This helps explain why the current trend is to give certain divisions within a core brand equal billing on the nameplate, as Mercedes-Benz does with its Maybach luxury group and its AMG performance division, with vehicles badged as Mercedes-Maybach and Mercedes-AMG, respectively. Not only does this limit the need for separate physical, marketing, and retail development, it also privileges the core brand; AMG's reputation for speed and sportiness, and Maybach's luxury bona fides, both reflect back to Mercedes-Benz, helping to create a halo around the core brand's more quotidian products.

But the allure of crafting a fresh identity remains. This derives in part from a desire to move beyond the constraints of a legacy automaker's heritage—to appeal to customers who may not have been attracted to what the core brand represents.

“Our brand mantra is 'Pure, Progressive Performance,'” says Tim Heldmann, Polestar’s vice president of global marketing and brand management. “It kind of merges propositions from Tesla, on the 'pure' side, and Porsche, which is a performance driven proposition.” It's unlikely a longtime Volvo customer would think of that brand in the company of Tesla or Porsche—and that's entirely the point.

“Volvo is rooted in safety, in delivering a car that is not offending anybody. It's inclusive, it's brining everybody on board,” says Ingenlath. “Going with a brand like Polestar actually dares to put something more eccentric, something more individual, something which will provoke reactions that are not universally positive. This gives us more freedom in making a more avant-garde design.”

Donckerwolke, of Genesis, echoes this sentiment.

“Nobody needs another luxury brand," he says. "So we have the possibility to do something different in the refinement, in the orchestration of materials and elements. We can play for something that doesn’t have the ballast that other brands have, because they have a tradition.”

But even with significant corporate, financial, and institutional support, launching a sub-brand can come with unforeseen challenges. This is especially true when the new brand's foundational features run in opposition to those of the core brand.

Like much of Swedish society, Volvo is a company focused on the collaborative and the greater collective good. Polestar, in contrast, is unabashedly driver-focused—more maverick, more individualistic. Ingenlath says such thinking "does not come natural" to Volvo's upper management. But he's also quick to note the steadfast support of Volvo CEO Hakan Samuelsson.

“A lot of people love the brand and embrace it," Ingenlath says. "But, often in life, you actually admire and love something which is not you, and partly that’s the reason why.”

Korean culture, according to Fitzgerald and Donckerwolke, is traditionally focused on humility, conformity, and valuing the perfect execution of extant ideas over the creation of new ones. Yet one of the pillars of Genesis is "audacity"—a far cry from Hyundai's longstanding ethos. Fitzgerald calls it “a change of parameters ... in terms of understanding the customer, understanding how you go about things, and trying to cater to a totally new segment, which is the most challenging segment of all.”

Such clean-sheet thinking can be beneficial whether or not the sub-brand ultimately succeeds, because it can force the core brand to experiment—with new technologies, capabilities, materials, or even retail concepts. All of this happens in a niche realm, likely with a new consumer base, and without the need for mainstream acceptance. A sub-brand can act as a real-world test bed, with the possibility that the best lessons learned can be rolled back into the parent brand.

“From a technology point of view, I think we describe ourselves as the guiding star, which means a very premium positioning which has a kind of flag-bearer approach,” says Polestar's Heldmann. “So when it comes to new technology, this will be cascaded into the group by Polestar. That way we can show our leadership in terms of technology, but on the other side, it can be a test before it really goes into a broader scale for Volvo.”

Fitzgerald echoes this, in a slightly different way, when it comes to Hyundai and Genesis. “Hyundai Motor Group has successfully demonstrated in the past with their unprecedented track record of delivering good products in a very fast time and exceptional quality by following certain rules and delivering product that is mainstream,” he says. “But as a premium luxury brand, you have the role to lead. And that is a totally different mindset.”

The creation of both Genesis and Polestar can also be viewed as an attempt to help both core brands move more upscale. This part why the brands are not being cast as 100 percent separate entities. Volvo performance vehicles will feature “Engineered by Polestar” badging to signify that the upscale brand has massaged the Volvo's engine, chassis, and dynamic tuning, making the core Volvo product more enticing, and linking the brands together.

This isn’t just for the sake of prestige: if Polestar can successfully sell six-figure cars, it could help nudge Volvo models into higher price points—meaning higher profit margins—as well. This is an overt mission for Volvo, and has been since the start of the decade when the brand relaunched under new ownership by the Chinese company Geely.

“Our ambition as well with Polestar is that Volvo becomes more premium,” says Heldmann. “So, we actually want to move the two brands.”

Of course, not all of these experiments will succeed. And not all of them are meant to. That's another part of the value of these kinds of efforts: they can create distinction for their parent brands even if they don’t catch on. Polestar’s driver-centric sportiness and sleek Scandinavian brand centers, and Genesis's quilted-leather luxury and hydrogen fuel cell-powered SUVs, will be a reflection of the respective ambitions of Volvo and Hyundai. Plus, according to an industry insider who wanted to remain anonymous, if Polestar folds, the expectation is that all of the learning that took place in launching the sub-brand will simply be rolled right back into Volvo.

“Out of ten things, one or two things might not work,” Ingenlath says. “That we have to accept, as well.”