What If Tesla Pursued Micromobility?

Tesla may have changed how we think about cars, but Courtney Ehrlichman wonders why they haven’t thought about mobility beyond the car. 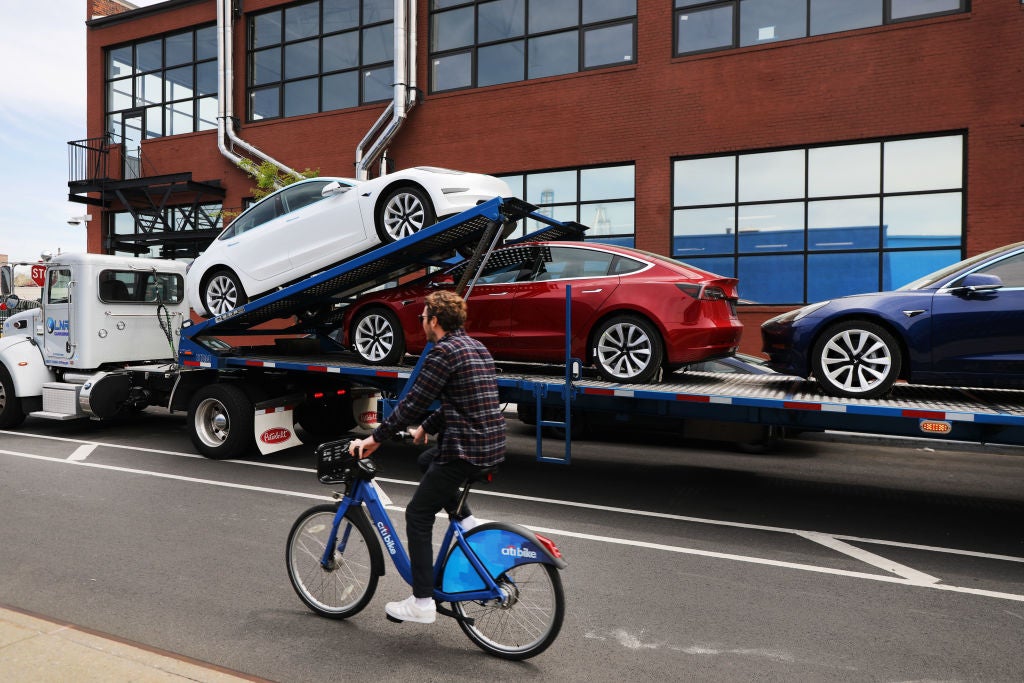 Tesla missed the best disruptive play of all time with the unveiling of its Model Y earlier this year. Empty promises of the iconic gull-wing doors and a price tag under $40,000, consumers and investors were generally underwhelmed. Ultimately, there was a lot of talk about the Model Y just replacing Model 3 sales.  Stock prices fell as much as 5% following the reveal. Not S3XY.

Last week was the first time I actually rode in a Tesla (I’m a cyclist based in a transit dense area of Pittsburgh). As I approached the car, I marveled “what a beautiful specimen to serve as the disruptor to the electric vehicle industry” - the clean lines were so pleasing to the eye. Then like a needle being ripped off a record, I struggled to actually get into the car, I couldn’t open the door. Once inside, I bounced up and down on the ultra-comfortable passenger seat but quickly got bored as the driver demonstrated the autopilot technology. Later, I pondered out loud, “why can’t Tesla just sell a sexy e-bike with their cars?” To which my friend in the driver seat replied, “or an e-scooter?” Certainly, the innovator’s dilemma.

To date, Tesla still owns the lion share of the EV market, with 67% of EV sales in Q1 2018 with estimates for Q1 2019 up at 75%.  And we shall not forget in 2017, Tesla rose above both Ford and GM to be the largest automaker in the US, by market cap. Is it safe to say that Tesla has secured the seat of electric vehicle segment incumbent? What happens to incumbents? According to Clayton Christensen’s Disruptive Innovation Model, they get disrupted.

Here’s a quick recap of the theory from Harvard Business Review: “Disruption” describes a process whereby a smaller company with fewer resources is able to successfully challenge established incumbent businesses. Specifically, as incumbents focus on improving their products and services for their most demanding (and usually most profitable) customers, they exceed the needs of some segments and ignore the needs of others.”

Tesla, who sought to disrupt the auto industry with a high-end approach to the electric vehicle segment of the market, and work their price point down to the masses, is now seeing the space crowd around them. An entry-level Nissan Leaf is now $6,360 less than a Tesla Model 3, now that Tesla’s federal tax credit is tapering off.  The Chevy Bolt is also cheaper than a Tesla Model 3 and offers more base miles. The vehicles are moving up the value chain to challenge Tesla’s incumbent position.

What’s an incumbent company to do to maintain their competitive advantage? Let’s take a page from Steve Jobs strategy and push for Tesla to continue its penetration in the mobility market by unbundling its offerings across the entire mobility ecosystem. This is already happening with the onslaught of new forms of micromobility on the street, a disruption that analyst Horace Dediu calls “the Great Unbundling” of the car! I can’t believe Elon can’t see it.

But isn’t that just what Disruptive Innovation theory goes on to explain? Indeed, it does: “Entrants that prove disruptive begin by successfully targeting those overlooked segments, gaining a foothold by delivering more-suitable functionality—frequently at a lower price. Incumbents, chasing higher profitability in more-demanding segments, tend not to respond vigorously.”

Last November, Elon Musk told Kara Swisher that anyone riding an e-scooter “lacked dignity” on the Code Recode podcast.  An indignant Ms. Swisher pushed back against Elon, but he remained unyielding, suggesting anyone riding an e-scooter and thinks they look good is “laboring under an illusion.” It seems that Elon’s opinion of e-scooters matched that of investors’ after the Model Y reveal, unimpressed.

Do you know what looks good? So good as to be excitable and potentially even, S3XY?  Offering unprecedented disruption across

Let’s look at some cold, hard stats about the shared electric scooter market.  Usage of e-scooters has soared since the beginning of 2018.

According to the National Association of City Transportation Officials (NACTO), in 2018, 38.5 million of the 84 million micro mobility trips taken were on electric scooters. E-scooter startups quickly achieving unicorn status (companies that are worth $1 billion or more). Beyond venture capitalists dumping in investment, Uber and Lyft have also invested looking to complement their ride-hailing and robo-taxi business models.  Automakers - moving towards becoming mobility providers instead of mere automobile producers - are innovating via acquisition in the micromobility market. Ford has already moved into the space by acquiring Spin last year.  It’s somewhat reasonable to predict that mobility providers will continue to also acquire other companies, such as Bird and Lime.

Except for that one nagging thing: - how and when will the shared e-scooter business model become profitable? As it stands right now, thanks to the inpouring of venture capital, the prices are pretty much the same between most of the companies. But some things will need to shake out when that VC windfall stops. Heavy hitters could merge, stop competing with each other and achieve profits.  Either way, prices are going to have to increase, like we are seeing in Indianapolis, where Bird doubled it’s per mile prices and Lime increased theirs by 66%. Or maybe all the companies run out of money and they all fail.  As it turns out, the overall viability of the shared e-scooter business is still up in the air.

At the afterparty for the Micromobility California Conference, I met a young woman who was all too happy to fold up her own personal e-scooter and roll it alongside us as we walked down the street. She told me she was so in love after trying one in a shared e-scooter fleet that she bought her own on Amazon. As we arrived at the bar, she tucked it away by the entrance, just like an umbrella. Later in March, in Paris with my daughter, I saw families riding together on family fleets of privately-owned scooters - both electric and non-electric. They would quickly fold them up, hop on a bus or duck into a grocery store.

The shared e-scooter market is also facing concerns about theft and devices breaking mid-ride because they weren’t designed for such heavy fleet use. So, what’s to stop the public from switching to privately owning an electric scooter? Customer mind-shift has already occurred, the numbers show that the public has adopted the scooter for transportation plus e-scooters are becoming more and more affordable.

Tesla could charge right into the micromobility segment with the advent of an e-scooter as an accessory, truly bringing the Tesla brand to the masses. The e-scooter would be Tesla branded (I vote for calling it S3XY), contain the Tesla-pioneered electric battery, have an integral lock, and be rechargeable not just in the frunk of a Tesla, but inside ANY electric vehicle. A true unbundling of Tesla.

Tesla could also take a stab at alleviating the new pains for auto commuters are experiencing with the first in the US congestion pricing policy, which passed earlier this year in New York. Proponents of the policy are hopeful this may lead to many other large cities (Boston, LA) to follow suit.  Critics fear congestion pricing may push parking to the congestion zone periphery pushing commuters to utilize transit for the last mile.  Trade-off calculations have been made. For example, in NYC’s congestion pricing zone, the economic factors for commuters include “the new toll to skirt, parking costs in the CBD avoided by remaining outside, subway fares to pay, the time spent finding on-street parking on the outskirts, time saved by not driving all the way in but now incurred on the train, and the hassle factor of leaving the car on the street somewhere.” Fascinating that these attempts to predict the impact congestion pricing only consider transit as the last mile connection, not any other alternative, like micromobility.  Tesla has the potential to upend that assumption in the tradeoff calculation and make congestion pricing more appealing to critics.

Beyond that, Tesla could amass rich amounts of vital first/last mile usage data within its entire fleet, and fundamentally understand the micro and automobility market segments, with eyes still focused towards a future that contains full self-driving.

Tesla needs to just face it. They reached best-selling electric vehicle in 2017 with the model S, becoming an incumbent.  They lost that status to the Nissan Leaf in 2018. They underwhelmed investors in 2019.

"Automakers are seeing that rideshare, bikeshare and scootershare are taking the short trips, from zero to five miles," Horace Dediu, a tech analyst who hosts the Micromobility Conference. "It's important for them to get ahead of this game."