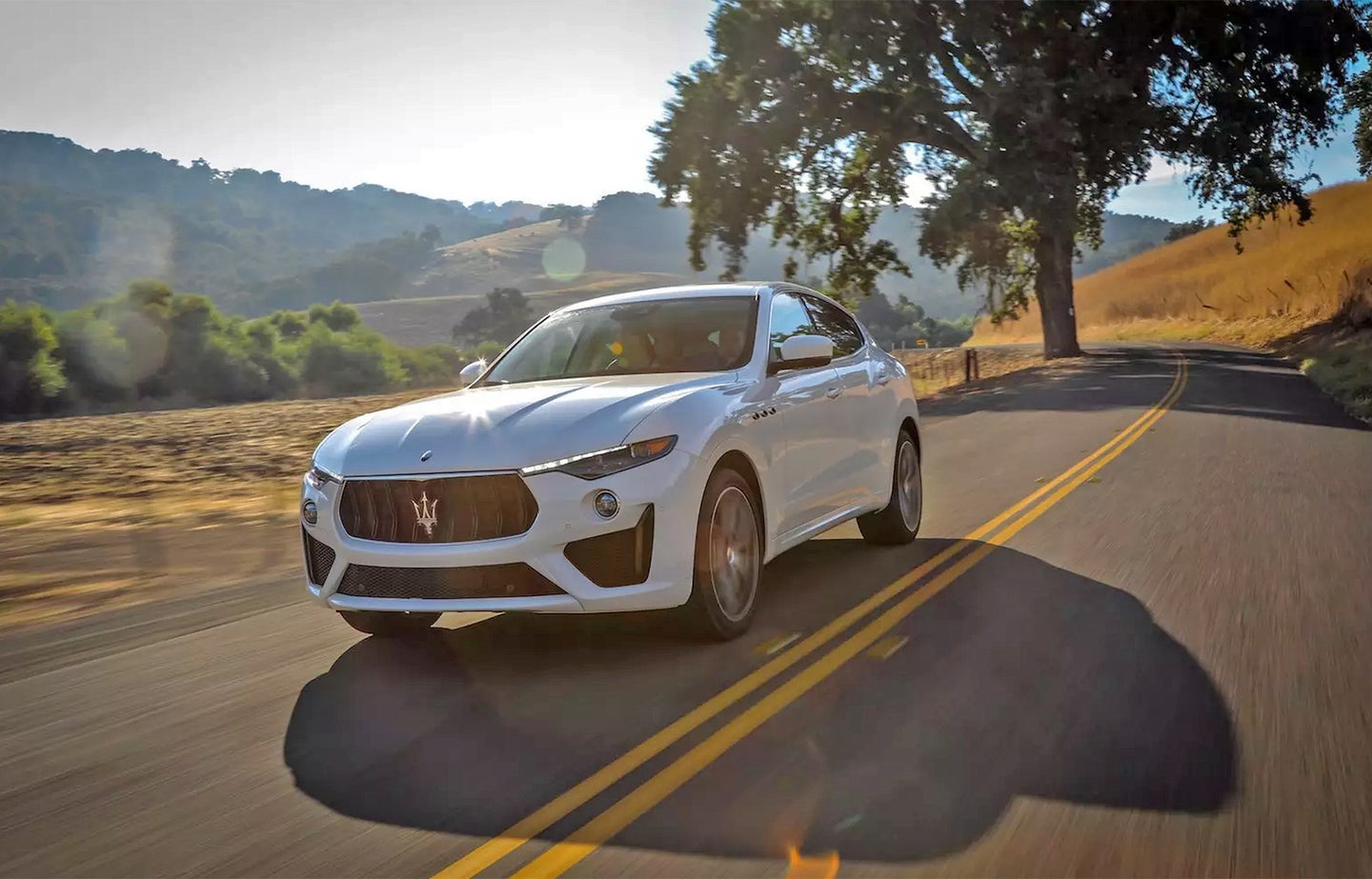 What a difference an engine makes. Especially when we’re talking a Ferrari engine: a twin-turbo V8 that vaults the previously overshadowed Maserati Levante into a spotlight worthy of La Scala. I definitely felt like flinging roses at the new Levante GTS after basking in the sound and sensation of this 3.8-liter V8—co-engineered by Maserati and Ferrari, and built at Ferrari’s Maranello engine factory. That sensation includes 550 horsepower in the GTS, or 590 in the Levante Trofeo. With this eight-cylinder, Maserati has a tempestuous Italian alternative to models like the Porsche Cayenne Turbo, BMW's X5 M and X6 M, the Mercedes-AMG GLE63—or even the Levante’s Fiat Chrysler cousin, the Alfa Romeo Stelvio Quadrifoglio.

Naturally, becoming an owner in this major league of SUVs comes at a price: $121,475 for the GTS, or $171,475 for the Trofeo. Both prices, not coincidentally, are right in line with what Porsche charges for a respective Cayenne Turbo or Turbo S. So yeah, these are niche models, with Maserati expecting only about 10 percent of buyers to choose the V8. But that 10 percent will definitely separate themselves—literally and metaphorically—from drivers of twin-turbo V6 models that start at $77,475, or $88,475 for the 424-hp Levante S. A quick calculator punch shows a $33,000 upcharge for the Levante GTS versus the Levante S (and the aforementioned $50,000 on top of that for the Trofeo).

Maserati claims these Levantes were born in a Skunk Works project in Modena; engineers worked to shoehorn a V8 behind the striking trident-capped grille without informing superiors of what they were up to. (Umm, the world's longest espresso break?) Packaging that V8 with AWD required a completely new crankcase design that extends a half-shaft to drive the front axle. Compared with the 523-hp version of this V8 in the Quattroporte sedan, this one also adds new twin-scroll turbos, camshafts, valves, pistons, and rods. The Trofeo version wrings out more turbo boost to make its 590 horses, while both versions bring a matching 538 pound-feet of peak torque at just 2,500 rpm.

The Levante operates as an entirely rear-driven SUV until its rear wheels—shod with 20-, 21- or 22-inch tires—begin to lose traction. When they do, up to 50 percent of power is shunted up front, in as few as 150 milliseconds. A trusty eight-speed ZF transmission finds a literal wingman in a finely formed pair of paddle shifters, rendered in aluminum for the GTS or carbon fiber for the Trofeo.

Visually, it’s harder to distinguish these Super Levantes, aside from subtle badges, lowered front and rear fascias, and Big Gulp inlets for the engine and radiators. For whatever reason, only the Trofeo model gets the pretty, painted valve covers that are a Ferrari/Maserati signature, but in red paint rather than the blue of recent Masers. The GTS settles for the same sort of prosaic, black-plastic engine topper you’d find in a Chevy.

But the cabin offers a reasonable dose of luxury and Italian flavor, despite diminishing returns as the your “basic” $78,000 Levante soars to $131,800—the as-tested price for my GTS—or beyond $171,000 for the precious Trofeo. Open-pore wood, lovely leather, an Alcantara headliner and a $1,990 Bowers & Wilkins audio system are appropriately convincing. For all 2019 Levantes, the previous console shift lever, a plasticky abomination that recalled something from a rental Buick, is replaced with a decidedly richer leather-and-metal unit. Where the previous electronic unit was maddeningly imprecise, the new one works without a hitch. Grazie, Maserati, for listening to and addressing one of the biggest complaints about the Levante.

Still, in familiar Italian fashion, there are gaps in the Levante’s luxury-and-tech game that keep it from reaching the dazzling heights of a Porsche or Benz. The seats are shapely, but don’t expect the pampering range of adjustments you find in German cars, such as massage functions, moveable bolsters, and thigh extenders. And all the wood and cowhide in the world can’t hide the workaday Fiat Chrysler switches, or the Garmin-y graphics of the familiar Uconnect infotainment system. As ever, there’s nothing wrong with how well Uconnect works, as any Hellcat or Chrysler Pacifica owner might affirm. But while it’s one thing to have Audi's rich MMI interfaces in a Lamborghini, seeing Mopar-spec minivan displays in a $131,000 Maserati pushes the cognitive dissonance a bit far. And, one final interior complaint: the Levante’s cargo hold remains relatively stingy by class standards.

Still, wealthy iconoclasts who won’t be conscripting their Levante for Ikea runs will be thrilled to death with the performance. This magnificent V8 makes the Levante’s presence heard and felt: Maserati cites a 4.0-second dash to 60 mph for the GTS, or 3.7 seconds for the Trofeo, with respective top speeds of 181 and 188 mph. That makes the GTS a full second quicker to 60 than the most-powerful V6 version, the $88,475 Levante S.

No, it’s not a classic flat-crank, naturally aspirated, shrieking Ferrari motor. But this twin-turbo V8 is unmistakably a product of Maranello: addictively powerful, throaty, and responsive. Even in city traffic, I’d find myself downshifting and warp-speeding to the next stoplight, just to hear the thing crescendo to its 7,000-rpm redline. Compared with the Cayenne Turbo’s whispery “inside voice” or the Alfa’s twin-turbo V6, it’s no contest. Now, the angry artillery blat of Mercedes-AMG’s SUVs or BMW’s X6 M are definitely worthy of enthusiasts’ ears. But even there, a Ferrari V8 just sounds different than a German V8—that reedier, sexier tenor pitch—and certain big spenders will welcome the difference.

Now, the Alfa, tuned as it is for Nurburgring records, is the more-aggressive SUV in terms of overall handling, but its ride is compromised; only a masochist would choose to drive one in New York or other urban moonscapes. The Levante, riding atop optional 21-inch wheels, did allow the occasional boom or bash to intrude into the cabin. Yet this Maserati, with its hushed cabin, six-position air suspension and Skyhook adaptive dampers, strikes a winning balance between handling and all-day comfort. That air suspension adjusts ride height over a generous 3.3 inches of total travel, including an off-road setting and a lowered “Park” position.

The steering is another Italian delight—meaty and immediate, with the genuine road feel that’s lacking in so many crossover SUVs. (Hell, cars too.) Counter-intuitively, the Levante GTS’s electric steering struck me as more responsive than the hydraulic rack in the original model. The Levante’s 50:50 weight distribution helps matters. There’s more body roll than, say, the Alfa or BMW, yet I really liked the Maserati’s natural feel; specifically, the way it doesn’t seem artificially flattened and snubbed down. Like the V6 originals, the eight-pot Levante is a car that neatly disguises its mass—the GTS weighs 4,784 pounds—and feels as much a tall hatchback as an SUV. On knotted roads in upstate New York, the Levante took a firm, confident set into corners then rifled out again, aided by a rear limited-slip differential and those snappy shifts of torque to the front wheels.

There is tech magic going on, but the rabbit mostly stays in the hat. The so-called Maserati Integrated Vehicle Control (IVC) connects the engine, steering, suspension, and electronic stability control to quell the understeer typical of SUVs and AWD vehicles. IVC’s brake-based torque vectoring and smart adjustments to steering torque aim to promote trusty, predictable feedback in hard driving. That generous feedback performance was welcome on a long series of downhill sweepers on New York’s Taconic Parkway, where the Levante tracked with a poise and precision that’s impossible to fake. Upgraded brakes are well-matched to the engine’s strength, including six-piston monobloc calipers up front, though I’d prefer that strength to show itself a bit earlier in the pedal travel.

It’s hard to write about a Maserati—and even harder to consider buying or leasing one—without considering where this perennially struggling brand is at. Recent recalls, production slowdowns and management shakeups have roiled the waters again. But the brand’s five-year plan, promoted by the late FCA chief Sergio Marchionne, is unchanged. The strategy calls for Maserati to compete directly against Porsche in several segments, including the upcoming 911-baiting Alfieri coupe and a bantam-sized SUV to tussle with the Macan.

Maserati’s most-recent Quattroporte failed to make any kind of dent in a flagship-sedan market that itself is struggling. The smaller Ghibli sedan, after a decent sales start, has faded. That leaves the Levante for now in the brand's hunt for relevance. Setting aside corporate questions, this Levante GTS seems fully competitive with a Cayenne Turbo, or other class players, in terms of power and performance.

Huh? What’s that you say? How many people are gonna spend $121,000 or more on a Maserati SUV? Sorry, I couldn’t catch that. I’m still distracted by the throaty croon of that Ferrari V8.