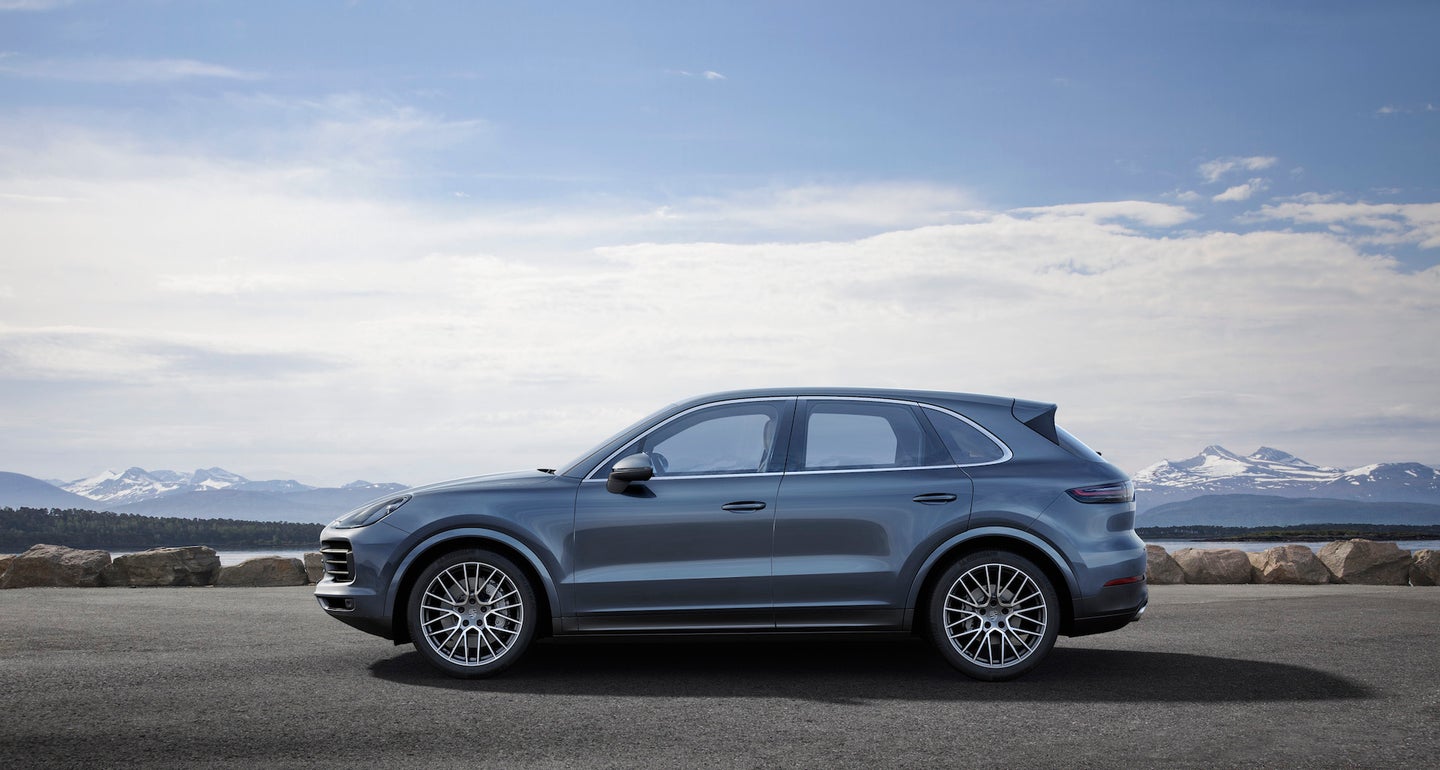 Hindsight being what it is, it’s quite possible that I took that rocky slope in Crete a hair too fast.

We were high above the Mediterranean, having just had lunch in the small port town of Plaka before heading back to Crete's heartland, where we’d continue plumbing the 2019 Porsche Cayenne’s prowess. Our route began with about three miles of light off-roading, the kind of thing the new Porsche Cayenne is designed to manage as handily as it does the tarmac.

Indeed, this third-generation redesign of this full-size Porsche SUV is as true of an off-roader as it is a pavement-shredder, with multiple modes that automatically adjust differential locks, ride height, torque distribution, and spring rates and dampers with the terrain. It has rear-wheel steering for extra maneuverability, and a particularly short first gear that allows for ultra-precise feathering of the throttle in precarious situations. There’s a helpful off-road-specific screen that provides intel on steering angle, incline, and gradient, as well as a bird’s-eye view of the machine in its surroundings, to help you retain your bearings.

None of that can fix stupid, though. Sure enough, the sharp Cretan rocks on our path revealed the true cretin—yours truly. While marveling at the Porsche’s ability to cancel out the rough-hewn surface to make it feel as smooth as the nearby sea on a still morning, I neglected to remember that tires are your first line of defense in any rugged beach assault. I clambered up the hill in at a speed that seemed appropriate enough—and certainly wasn’t a rally treatment—but nevertheless didn’t factor in the nature of the terrain itself. Small, razorlike rocks will make quick work of your rubber if tackled with too much gusto.

That’s right: flat tire. (You were hoping for something more dramatic? You monster...) A loud and embarrassing alert popped up on the center display to inform the entire island that my right rear tire pressure was off by about a half a pound of PSI. At first I assumed—hoped?—it was one of those artifacts of temperature and balance that tends to throw off PSI estimates, but the Cayenne calculates its tire pressure via direct sensor readings rather than differentials in wheelspin, as most cars do. So of course as I stared at the alert the pressure dropped another half-pound. A thousand yards later, it was off by two. Then four. I recognized where this was heading and resigned myself to a slow crawl-of-shame back to the restaurant, where a battalion of courteous German engineers managing our test drive promptly installed us in a brand-new Cayenne while they whistled up a replacement wheel from their basecamp some miles away.

If only the real world was that awesome.

So off we went to continue shredding tires—er, pavement—as though nothing had happened. Soon enough I regained my mojo and was happily enjoying the arcs and thrilling dipsy-do’s of the rural Cretan landscape, a gorgeous, undulating terrain of rocks intercut with grass that can could be described as “hairy-lunar.” It was a primo spot for stretching the Cayenne’s legs.

The luxury SUV originally debuted in the early aughts to cynical choruses of snickers: This was a corporate-mandated money grab in response to consumer enthusiasm for SUV’s, right? It can't be a true Porsche. To some extent that was true—with the tepid V6 models, in particular—and the original version was indeed something of an awkward mess, visually. (Though of its time, certainly.) But with each facelift and full redesign the Cayenne has become a smoother, more holistically executed, and more appealing package outwardly. The new model is lower, with a streamlined exterior and more naturally integrated headlights and taillights and more discrete placement of all the creases and folds.

The thrust of its progress lay, predictably enough, in the dynamic and demanding triangle connecting engine, steering wheel, and tires. Here, a slew of enhancements in the current version has made it into an indomitably fierce combatant. The engines are more powerful—the V6 turbo in the base model produces 340 hp (+40 over its predecessor); the Cayenne S has a twin-turbo six good for 440 hp (+20); and the Cayenne Turbo’s V8 has 560 hp, up 30 from the previous model. Quickest acceleration is a startling 3.9 seconds to 60 in the Turbo, followed by one-second diminishments in each of the lower models—neither of which are slouches. All crank a new 8-speed Tiptronic-S transmission. That’ll never have quite the giddyup of the dual-clutch PDK transmission found in the sports cars, but that tech hasn’t made its case yet for the SUV, since the Tiptronic does well enough at a fraction of the cost and complexity.

The new Cayenne is also 143 pounds lighter than its predecessor, which is right at the level of noticeability even in a big car. (Imagine driving along in a sport mode then suddenly ejecting a 140-pound passenger through he roof. You’d feel the improvement right away.) It has an active roof spoiler that can enhance downforce or introduce drag shave a few feet off your stopping distance during aggressive braking, and it keeps things nice and flat courtesy of three-chamber air springs and a 48-volt electromechanical active stabilizer bar. The latter is a bit of a marvel in itself, able to adjust torsional rigidity on both axles in milliseconds by applying over 800 pounds of twist toward each wheel in order to counter rolling forces.

As a result, you have an SUV that behaves as any good sports car with a lower center-of-gravity. Rolling through the Grecian countryside, it invariably felt planted and stable no matter how many turns ginned up far tighter radii than you might have initially calculated going in. (Many turns are thoroughly invisible thanks to the profuse vegetation there.) That enhances sportiness, sure, but it also makes things far more agreeable for passengers—including the spouse and kiddos—who won’t have to deal with as much nausea while you enjoy the hell out of the drive.

Then, of course, are those new sparkly-shiny brakes.

Speaking of those in the cabin, though, Porsche has upped the Cayenne’s game there with all the expected connectivity—including LTE data connections that fuel a more up-to-the-second Google search capability in the navi and a generous 12.3-inch touch display that offers Apple Carplay. (Though not Android Auto, because Google demanded a degree of data access that the carmaker apparently wasn’t comfortable with. Good for them.) The standard Bose and enhanced Burmester audio options at 710 Watts and 1,400 Watts, respectively, both provided robust acoustic accompaniment while exploring the the island. (Setting of Zorba the Greek, though I’m not so predictable that I’d download that and play it on my drive. Nope, not at all.)

There are many other enhancements to the car, as you’d hope for in something that starts at $65,700 but has option packages that can easily add another 30 grand or more to your bill—though if you exercise restraint you can pick up a nice old-ish Boxster with that coin. (The Cayenne S starts at $82,900 and the Cayenne Turbo starts at $124,600, btw.) But overall the most important ones are those that make the car infinitely more Porsche-like in character. Originally, the Cayenne was couched, much like the Panamera sedan would be, as a family-friendly option for the brand’s sports-car enthusiasts. But with 770,000 units sold to date, it’s clearly sailed way past that almost apologetic initial framing. It’s now a Porsche for enthusiasts of Porsche, period. The newest model seals that deal with authority.