The Slow and Steady Death of the Gowanus Expressway

How generations of neglect and treachery have brought NYC's substandard Interstate 278 to the brink of disaster. 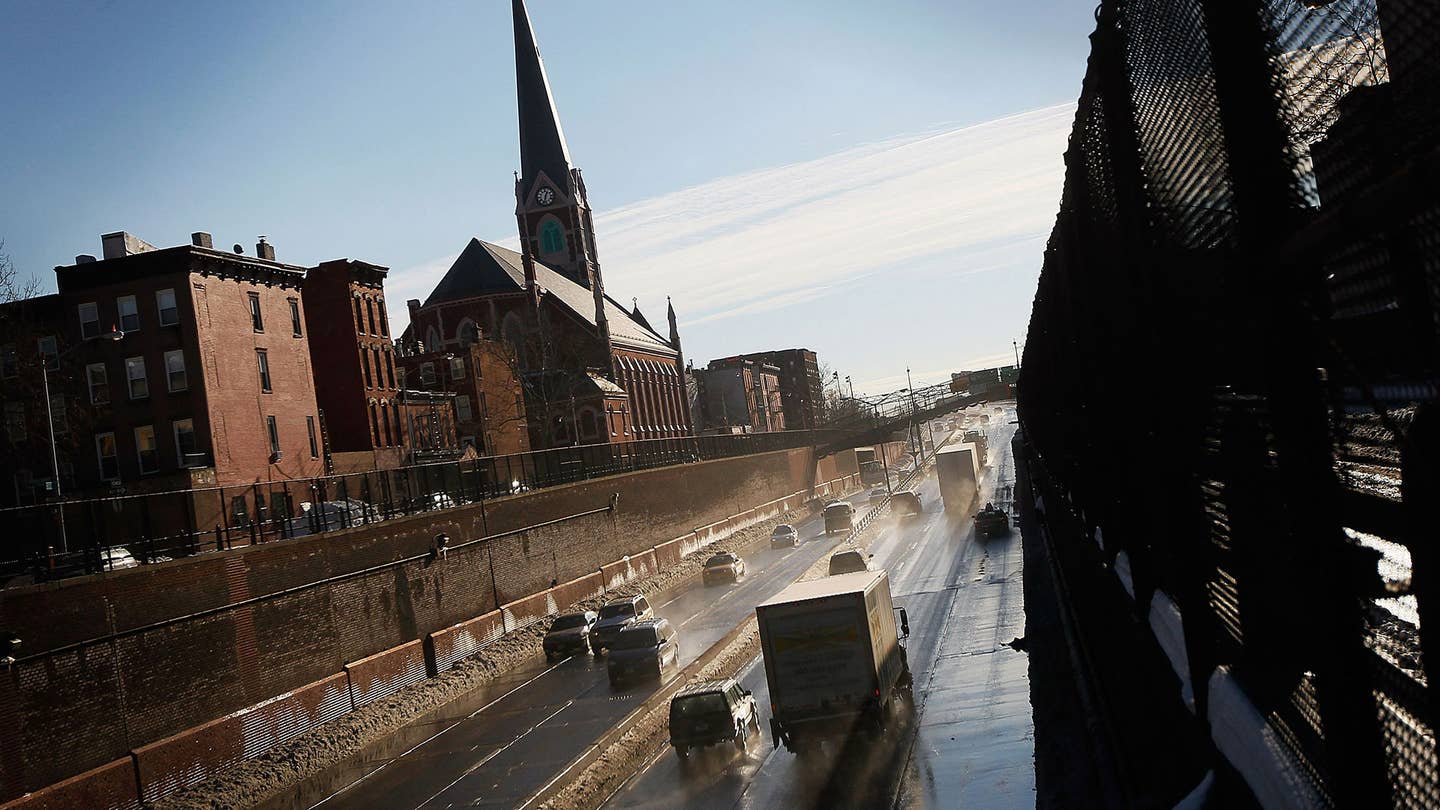 America's traffic infrastructure has fallen into a multi-trillion dollar state of disrepair. This spring, The Drive will investigate how America's crumbling roads, bridges and tunnels were allowed to decay, and how we can begin fixing them. In the first installment, we look in our own backyard: Brooklyn's Interstate 278.

If you drive over it enough times, you convince yourself that the Gowanus Expressway—the grim raised section of Interstate 278 that runs right below our offices in the Sunset Park section of Brooklyn, N.Y.—isn't going to fall over. The same holds true for the cantilevered section of the Brooklyn-Queens Expressway (BQE), which rises like a rusty layer cake into Brooklyn Heights, just south of the Brooklyn Bridge.

But no one really knows when a huge chunk of concrete is going to fall off the BQE and brain someone, or if an especially rusted section of the Gowanus Expressway will fail, bringing a huge stretch of the elevated road crashing into the neighborhood below.

It's not that the city, state and federal agencies that oversee highway improvements don't want to do anything about the rusting steel viaduct that cuts through Sunset Park, and the traffic strips shelved below Brooklyn Heights. Repairs have been made over the years. But those fixes were interim solutions to a larger problem.

Decades of road salt and a daily pounding by well over 100,000 cars and trucks have taken their toll on the steel and concrete that was used to build the structures back in the Forties. So far, no one has figured out how to repair – or replace – the 70-year-old highway in its entirety without disrupting a vital transportation artery, as well as the life and commerce buzzing on the streets of the surrounding communities.

Consider for a moment the scope of planning a highway system. Once upon a time, there was someone—a larger-than-life someone named Robert Moses—who wielded the political clout to get things like that done. His works included an entire city and state park system, all the highways in and around New York City and a number of building projects that included the Lincoln Center, Fordham University and a number of controversial public housing projects. To do all that, he managed to insert himself in as many as 12 city and state posts simultaneously. And he was in good with the banking crowd.

Sure, Moses stepped on some toes (meaning he displaced thousands of people from their homes) and tore apart a few neighborhoods to make way for highways and bridge approaches. But because of Moses's meddling, that infrastructure exists. And all these years later, the entire system needs a major overhaul—and it has for decades.

As you can imagine, the price of allowing a problem of this magnitude to continue to fester is steep, and congestion—not to mention cost—only compounds with each passing year. How will the lives of the people who use and live near disintegrating highways be affected in the years to come?

"Congestion is never an economic plus," Michael Cairl, who chaired the Gowanus Community Stakeholder Group for eight years and currently serves as chair of the Brooklyn Greenway Initiative, said in an interview, explaining that a study of the best way to fix just the Brooklyn Heights section would take about two years, followed by at least five years of construction. "That sounds like a nightmare, but the alternative – to do nothing – would be much, much worse."

Jeremy Laufer, district manager of Brooklyn Community Board 7, a city agency that serves Sunset Park, said in an interview that a study was commissioned years ago to determine the feasibility of replacing the aging Gowanus Expressway – a former train trestle that was repurposed for highway use in the late Thirties – with a tunnel. But even the most basic construction question – whether to dig a trench and cover it or to dig deeper with a boring machine – was never answered. The money for the study was needed elsewhere and the study was defunded, Laufer said. The same happened with a study looking at the cantilevered lanes below Brooklyn Heights.

"While the studies were going on, the DOT has had to keep things from crumbling, so they keep getting interim contracts to make spot repairs," he said, pointing out that now, some of the interim repairs are reaching the end of their intended lifespans. "The last time there was a big, comprehensive project was in the Sixties, when they widened it to six lanes."

A drive through Brooklyn on I-278 is rarely a breeze. Stretching from the Verrazano Bridge interchange, from Staten Island, to the Kosciuszko Bridge, which leads across Newtown Creek into Queens, traffic flow is impeded by several tight bends, combined with confusing X-patterned interchanges, potholes and sections of warped road surface. The result is a series of natural choke points where traffic is almost always backed up along the road's narrow 10-and-a-half-foot-wide lanes.

Along the Gowanus Expressway portion, traffic thunders by, inches from the windows of adjacent apartment buildings – unless there's congestion, in which case fumes from slow-moving vehicles envelope the area. Throughout Brooklyn and Queens, the highway lacks shoulders. A disabled vehicle, pothole or piece of large debris can reduce traffic flow to a maddening crawl. Beneath the raised sections of the road, illegal dumping, derelict vehicles and, when it rains, downspouts that gush water from the highway above form a pedestrian no-man's land. Laufer said that motorists and truck drivers already use Third Avenue, which runs parallel to and below the Gowanus Expressway, as an alternative when traffic builds up on the highway. Often, they drive at close to highway speeds on a pedestrian walkway-bordered road where the speed limit is 25mph, he said.

"I've seen RVs parked down there, boats, a cherry picker, a bloodmobile from New Jersey, even a vehicle with a license plate from Aruba," Laufer said. "When it rains, people have to walk around the deep puddles created by the downspouts and they can't use the crosswalks."

To understand how this road got so bad, you have to know two things. First is the fact that I-278 slices through several heavily populated neighborhoods. Moving it, improving it or diverting around it is and always has been fraught with immense logistical challenges. That brings us to our second point: history.

When The Gowanus Expressway – then four lanes and called the Gowanus Parkway – was completed in 1941, it was the capstone of a routing dispute that pitted local residents against developers. Moses, New York City's (and Upstate New York's and Long Island's) erstwhile highway development kingpin, wanted to use the decommissioned Third Avenue BMT elevated line to support the new highway. The people who lived in the neighborhood below it suggested that the road be routed along Second Avenue, which runs in front of a row of industrial warehouses, away from the residential zone. Moses prevailed and Third Avenue was cast in shadow beneath the opaque ribbon of asphalt.

"You can't talk about this issue without bringing up the name Robert Moses," Laufer said. "With an outstretched hand, Moses divided the community, and it still has great impact 70 years later."

Headed north from the Gowanus Canal, the highway plunges from the viaduct into a trench that divides another neighborhood, then skirts Brooklyn Heights on its way to another dingy raised strand of roadway that hovers above Williamsburg and Greenpoint before crossing the dilapidated and currently-being-replaced Kosciuszko Bridge. Cairl said the only reason the road didn't burrow into Brooklyn Heights through another trench is because residents there were more politically powerful than in the surrounding neighborhoods. But the stacked, cantilevered roadways that cling to the ridge there were built in the late Forties, and don't meet modern road construction standards.

Driving beneath a section of the BQE, it's difficult to look at the cracked, mesh-patched concrete and exposed, rusted steel reinforcements suspended above and not envision a chunk of it falling onto the roadway. It has happened on other highways in New York City in the past, Sam "Gridlock Sam" Schwartz, a traffic engineer and outspoken critic of the city's infrastructure, said on a recent Brooklyn Paper Radio broadcast. Falling concrete killed a motorist on the FDR Drive – a highway in Manhattan – in 1989, and a pedestrian was killed in 1981 when a support cable on the Brooklyn Bridge snapped.

The danger of roadway failure on I-278 is of the maybe variety. Something could happen, but when? Meanwhile, traffic trundles back and forth across the highway, day and night, forming the basis of a dubious reality for the many people who have to drive through Brooklyn every day. It's a situation that doesn't show signs of getting better anytime soon.

When pressed for information about the current condition of I-278 – including the Gowanus Expressway and parts of the BQE – the New York City Department of Transportation responded with a statement:

DOT is in the early stages of a project for the Brooklyn Queens Expressway from Sands Street to Atlantic Avenue. A dedicated program manager who is an experienced structural engineer has been hired at this point and all data and reports received from the former state study are under review, and the DOT Bridges team is developing the scope of work for a new design Request For Proposal. Additionally, in-depth inspections of the 21 structures within the project area are underway and are expected to continue for the next few months. During this period, outreach efforts will begin and updates will be provided in the near future toCommunity Boards and local stakeholders.

DOT was not able to say when construction would begin.

"We're coming pretty close to the end of the useful life of the bubble gum and duct tape used to fix it," Cairl said of the BQE cantilever stack. "It's not going to fall down tomorrow, but if something isn't done within the next 10 years, it's not unlikely that we'll see a major failure."

At a moment in history when America's largest city scratches its head, wondering what to do about a looming and potentially dangerous problem, it's interesting to consider the effect of piling figurative eggs into a basket that was never meant to carry eggs. In 1959, Lewis Mumford, writing for The New Yorker, was rueful about the city's decision to expand the Gowanus Expressway after its routing and configuration had already proven disadvantageous.

At the very moment… that we have torn down our elevated railways, because of their spoilage of urban space, our highway engineers are using vast sums of public money to restore the same nuisance in an even noisier and more insistent form. But what is Brooklyn to the highway engineer - except a place to go through rapidly, at whatever necessary sacrifice of peace and amenity by its inhabitants.