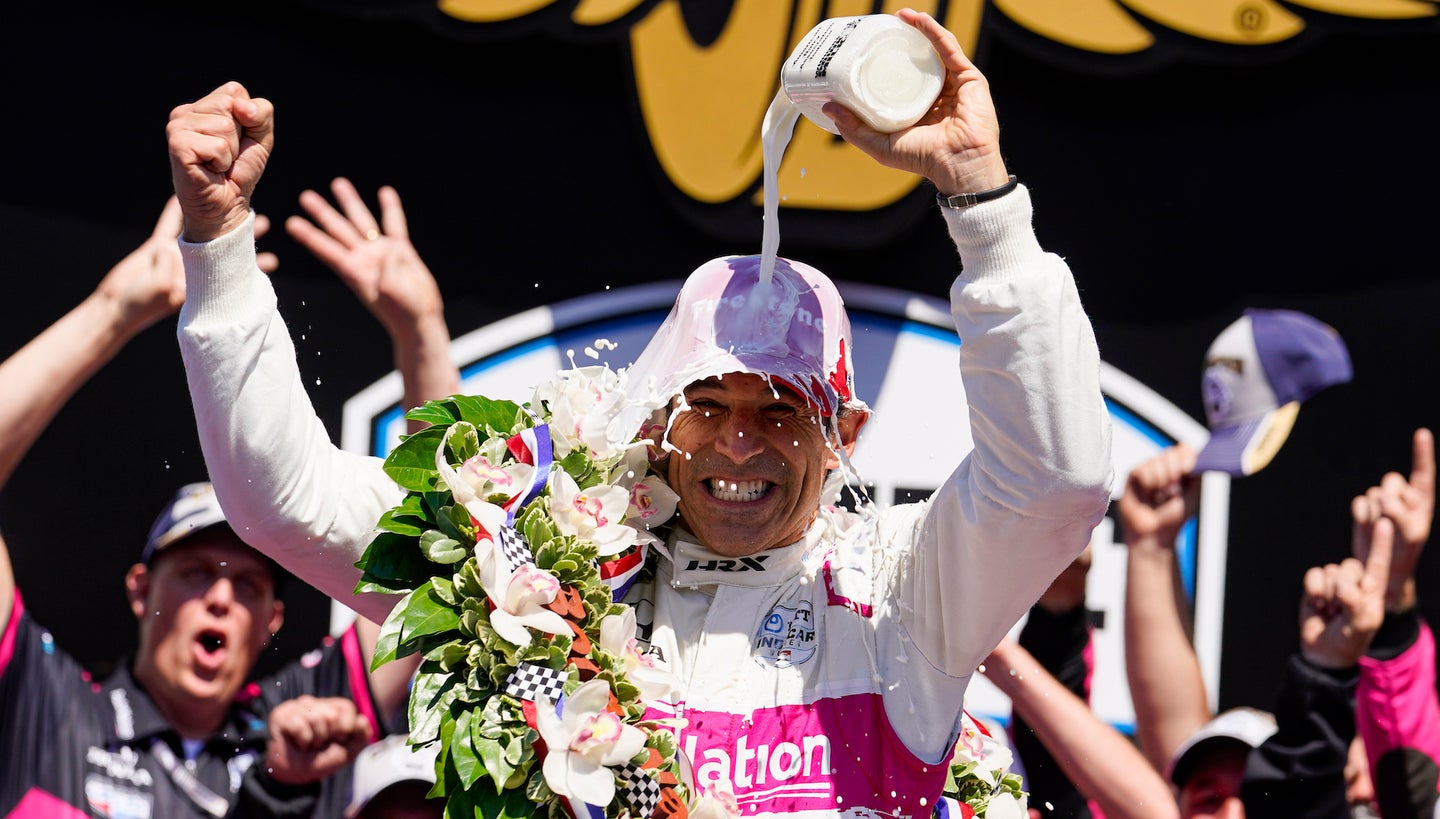 Helio Castroneves stormed to the front of the field at the 2021 Indy 500 to secure a win over Spaniard Alex Palou of Chip Ganassi Racing and Frenchman Simon Pagenaud of Team Penske, who finished second and third respectively. Sunday's victory earned the Honda-powered Meyer Shank Racing team its first 500 win, while the Brazilian became one of just four, four-time 500 winners

The 105th running of the Indianapolis 500 got off to a clean start with all 33 racers making it through all four corners unscathed; Chip Ganassi's Scott Dixon setting the tone at the front for the first 30 laps or so. Lap 35 brought the first yellow flag when Stefan Wilson lost it at the pit entrance and spun his car around under heavy braking, blocking the pit lane and triggering a chain of events that the series' top racers—Dixon and Andretti Autosport's Alexander Rossi—will prefer to forget.

With the pit lane closed due to Wilson's crash, Dixon and Rossi were forced to stay out on track longer than their pit strategies allowed. Once the special "emergency rules" permitted them to come in for a quick splash of fuel, it was too late, as the engines on both cars shut down and took a while to restart after being refueled. This put the last nail on both of their coffins, as the New Zealander and the American fell a lap behind the leader and spent the next 165 laps trying to undo a damage that was simply too great.

Dixon and Rossi's shenanigans opened up the door for other young hopefuls at the front of the field, with Indiana-native Conor Daly, IndyCar Rookie of the Year Rinus Veekay, and youngest-ever IndyCar winner Colton Herta rocketing to the front of the pack. The trio held control of the race for over 40 laps until the next pit rotation saw the likes of Mexico's Pato O'Ward, Palou, and Castroneves come into the picture.

Things were further shaken up once again on lap 119, when Graham Rahal spun and slammed against the wall in dramatic fashion after his rear-left tire came detached from his race car while rejoining the track following a pit stop. Initially said to have lost control while accelerating, it was later clarified that the wheel in question was actually never properly attached by Rahal's pit crew, and that's what caused the second-generation racer to lose control and ultimately crash.

The runaway tire detached with enough force to bounce off the outer wall and continue rolling down the track until it dangerously got in the way of Daly's trajectory, who punted it and sent it flying once again. Daly's car suffered minor damage and was able to continue without pitting for a new cone. Commentators quickly billed the accident as the reason why the Aeroscreen (windscreen) is important in modern Indy cars.

The green flag was waved once again with 75 laps to go, and by then it was evidently a three-horse race led by Palou, who had his mirrors full of Castroneves' black and purple race car, and O'Ward who was following closely in third. With just 15 laps to go, Pagenaud started coming strong thanks to a pit stop that awarded him enough fuel to last him until the finish and fresher tires than the top three.

Traffic played a big role in the final 10 laps, and some may say that it cost Palou—who has only raced on ovals five or six times—the 500 win this time around. Castroneves, on the other hand, has plenty of experience dealing with these scenarios; today's race being his 21st Indy 500.

With just two laps to go, Castroneves made the pass from second to first and took advantage of severe traffic to play mental games with Palou, and also with Pagenaud who had just passed O'Ward to claim third place. With just one lap to go, Castroneves quickly switched his usual racing line to make sure Palou didn't have clear references on where he could retake the lead again.

After crossing the line, Castroneves evolved into a character we haven't seen since the last time he won the 500 in 2009 (or 2001, 2002): Spiderman. The Brazilian quickly climbed out of his Honda racer and climbed the fence dividing the Yard of Bricks from the spectator stands. He clung onto the chainlink fence, shaking it passionately while celebrating with his fans and crew alike.

"This time when I needed it the most, they [Meyer Shank] were there for me," said Castroneves to the tv cameras as he celebrated with the crowd. "I love Indianapolis, this is incredible. From the beginning, we [the team] were so quick, so excited. We played it just right. The car was incredible and I knew that I was going to have to put my elbows out and fight."

Castroneves' fourth victory is a story of redemption, after essentially being shown the door at Team Penske's IndyCar program and quietly relegated to sports cars, where he also found tremendous success with the Penske Acura program. However, after being denied one more 500 run at Penske, Castroneves found himself knocking on doors at teams with fewer resources, and certainly, fewer chances of winning.

Getting a taste of the milk today is like telling Penske that it was wrong to see him out, and that even at the age of 46, he's got what it takes to beat a field of 33 young and incredibly fit racing drivers.

"We're just getting started," Castroneves said while on the podium. "If [Tom] Brady, and [Phil] Mickelson and I can win in 2021, it goes to show that old guys still got it."