Can the Alfa Romeo Guilia Shake Up the Luxury Sedan Market? 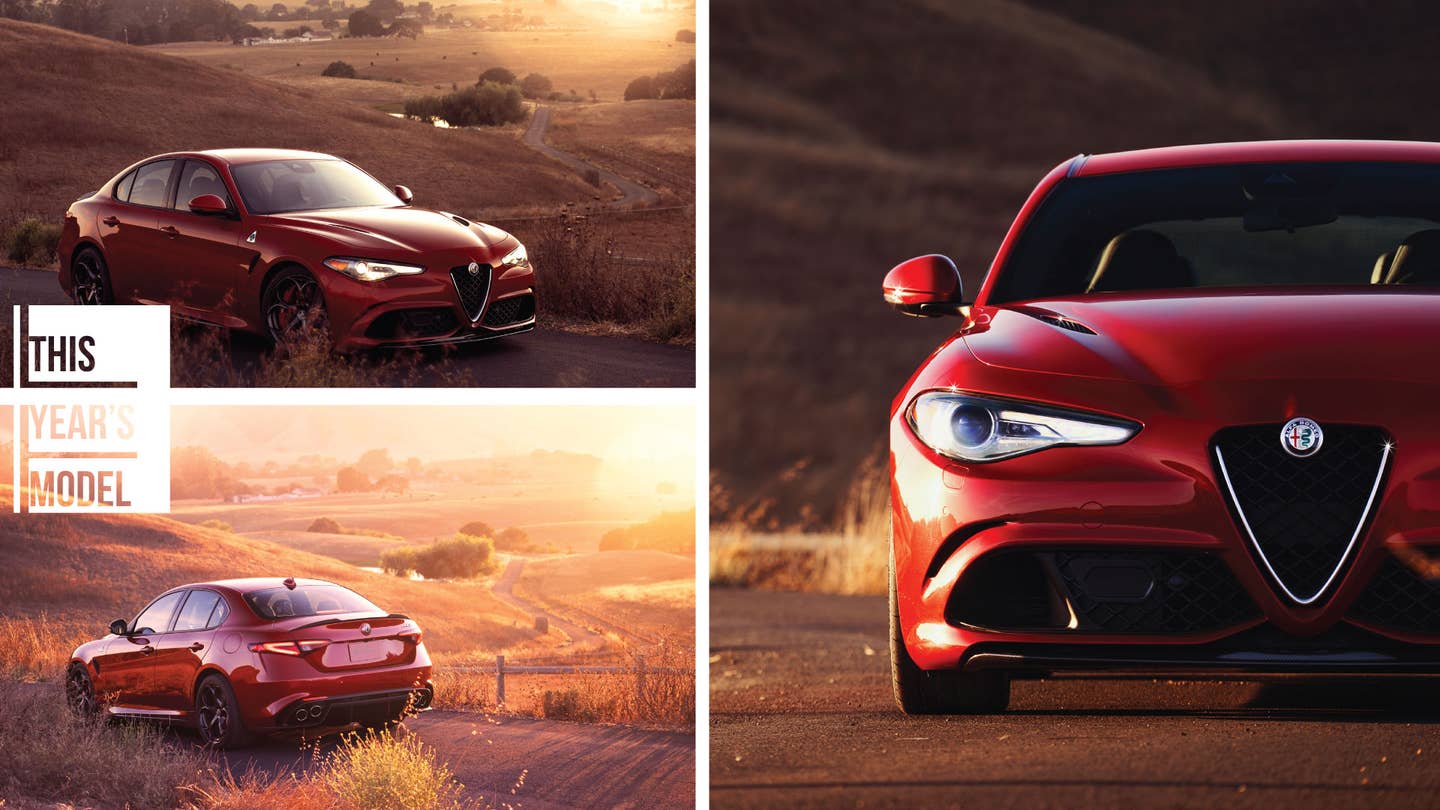 During its slow-drip return to America, Italy’s prodigal Alfa Romeo has sent two teasers across the Atlantic: The 8C Competizione, a $300,000 exotic back in 2008; followed by the 2015 Alfa 4C, a sexy, frisky and impractical two-seater.

Those cars were the warm-ups. Alfa’s four-quarter game begins with the Giulia sport sedan. (Pronounce it like “Giuliani,” minus the last syllable). When it comes to wooing America, Alfa has been a notorious heartbreaker. But the Giulia is one of eight all-new cars and SUV’s that Alfa has (again) pledged to bring to nearly 250 U.S. showrooms by 2020, paired with Fiat and Maserati stores. There’s even a sparkling new factory, the Fiat Chrysler Automobiles Cassini plant, halfway between Rome and Naples.

The Giulia is aimed at the icy Germanic hearts of the BMW 3-Series, Mercedes C-Class and Audi A4 —along with the formidable new Jaguar XE, Cadillac ATS and every other compact luxury four-door.

So what’s different about the Alfa? Why might it dissuade you from buying a third consecutive BMW, and to join AA — the American Alfisti — instead? In a word, fun. Enthusiasts perceive, often correctly, that cars like the 3-Series have become obsessed with sales popularity. To broaden their appeal to the successful Everyman and Everywoman, they’ve focused as much on luxury, safety and gadgets as outright performance. Veering toward the softer, swankier end of the spectrum, they’ve taken their original audience for granted.

The Alfa is luxurious enough, but it plays a more old-school Italian tune, beginning with the twin-turbo squeezebox in the Quadrifoglio version. Extracting 505 horsepower from a mere 2.9-liter V6, the Quadrifoglio hustles to 60 mph in 3.8 seconds, on par with Mercedes’ monstrous, V8 powered AMG C63 S. Top speed is a class-topping 191 mph, versus the Benz’ 180 mph. Those are eye-opening numbers — as they should be for an underdog Italian that will cost more than $70,000 when it hits showrooms in December. It's a price tag well above the BMW M3 or Cadillac ATS-V, and closer to the $76,000 Mercedes.

But speed and statistics don’t tell the Giulia story. For that, you’ll need an audiobook to hear the Quadrifoglio’s lusty V6, and your own two hands to experience the Alfa’s thrillingly fast steering and high-wire chassis balance.

I was smitten after rocking test laps at Sonoma Raceway in California wine country and a scenic romp along Point Reyes National Seashore. Importantly, the crush extended to the standard, turbocharged four-cylinder Giulia. It goes on sale in early 2017, starting above $40,000, with a choice of rear or all-wheel drive. That more-affordable Giulia is the real brand ambassador here, the one that the majority of shoppers will measure against BMW et al. And this Giulia measures up just fine, including a class-best 5.1-second dash to 60 mph and a 149-mph top speed. It's also lighter. About 3,600 pounds in rear-drive form, versus 3,800 for the Quadrifoglio. Even the base sedan gets a big dose of aluminum and a standard carbon-fiber driveshaft to reduce weight and conserve motive energy.

The rear-drive Quadrifoglio (or “QV” in old Alfa parlance) adds carbon fiber for its roof and hood; a twin-clutch torque-vectoring rear differential; and an active aero front splitter that changes its angle by 10 degrees above 75 mph to boost front-end downforce.

The Giulia looks good, recalling a 3-Series in a waist-cinching corset, though some eyes see traces of Mazda’s Italy-inspired designs as well. Mike Guy, The Drive’s editor, still recoils from the oversized, three-corner Alfa grille. It does recall the toothy redneck Mater from Disney’s Cars, but Luigi, the movie's vintage Fiat 500, would leak all over the pavement at the sight of his new Alfa cousin.

As Gemütlichkeit as some German interiors may be, some suffer from the curse of familiarity, and none more so than BMW’s status-quo cabins. The Alfa may not be as purely luxurious as a rival Audi or Mercedes, but it’s still appealing: Spare, smartly dressed and as refreshingly Italian as its performance. Classic analog gauges, including a 200-mph speedometer, peer from a pair of cannon-barrel binnacles. The brow of the leather-topped dashboard ambles downhill from left to right, flashes a leprechaun stitch of green-and-white, then curls over the porthole vent on the passenger side. A three-spoke, optional carbon fiber steering wheel is a must-have interface. Among four-cylinder models, definitely head for the Ti versions, whose Sport or Lusso (luxury) packages raise the Alfa’s visual and performance game.

The available 8.8-inch infotainment screen recalls a handsome infinity pool, hiding its frame in striking flush-mounted fashion. The rotary-knob system isn’t as intuitive as Audi’s, or its graphics as flashy, but the vexations are modest by the standards of Italian cars. Rear quarters are on the BMW-snug side, especially with the optional, fixed glass roof panel that robs headroom, and narrow rear door openings will have bigger guys swearing off the risotto.

Like its cousin in the Fiat Chrysler family, the Maserati Ghibli, the electronic console shifter is one stylistic sore thumb. It’s a virtual copy of BMW’s saddle-horn-shaped unit, but with a cheaper, rubbery look and feel. As you might have heard, it’s your only choice, with Alfa nixing the six-speed manual Giulia for the ostensibly clutch-allergic American market. Wring hands if you like, or save the righty for a BMW, Cadillac or Audi—the latter recently adding a manual as a no-cost option throughout the A4 lineup.

Watch the video — and the hard-working hands of Alfa test driver Fabio Francia — and you’ll get a picture of how the Quadrifoglio drives that beats all my thousand-plus words. Here it goes anyway: With its insane 11.8:1 steering ratio, The Alfa dives into corners more like a Porsche 911 than a sedan. Yet this four-door never feels nervous or twitchy. On the two-lane playground of Point Reyes, the Quadrifoglio and Giulia Ti romped like naughty schoolboys with a handful of firecrackers, and me with them. There’s more body roll than the electronically battened BMW M3, but I frankly loved the Alfa’s natural lean-and-slingshot approach. One class demerit, however, goes to the scanty road feedback from the electrically assisted steering, noticeable both on road and at Sonoma’s technically demanding circuit.

The QV’s twin-turbo V6 is formidable, and not quite what you’d expect. Despite 505 horsepower and 443 pound-feet of peak torque, we’re not dealing with a basement-dwelling power monster like Mercedes’ bi-turbo V8. The relatively small 2.9-liter displacement is an Italian recipe for turbo lag. Alfa claims the Quadrifoglio serves up peak torque by 2,500 rpm. I’m skeptical: Engine response is decidedly wait-for-it at lower revs. But the engine hits its thoroughbred stride around 4,000 rpm, then pulls like the bejesus all the way to a 7,000-rpm redline, all while emitting some of rowdiest exhaust barks and backfires of any V6 around.

The Alfa is the first car to adopt Continental’s long-aborning brake-by-wire technology, which severs the traditional, physical link between the driver’s pedal and the brakes themselves. What Alfa calls the Integrated Braking System saves up to nine pounds versus conventional stoppers, but it’s also a key part of the evolution toward semi-autonomous brakes that react to threats faster than a human could. Pushing the pedal sends electrical signals to a digital control module that combines a brake booster, ABS and stability control. The system simulates the pedal-force feedback you’d get from normal brakes, with a computer brain and linear actuator translating your commands into hydraulic force at the wheels. Both models get Brembo discs, including six-piston calipers on the QV and optional carbon-ceramic stoppers.

As with Infiniti’s unique steer-by-wire unit, we’re not the happiest guinea pigs, at least not yet. The Alfa’s brake pedal feels nicely firm, but not progressive. Imagine an on-off switch, with stopping power packed into a too-narrow band of pedal travel. There’s no vibration through the pedal, as Continental advertises, but there's also too little feedback on what’s happening at the wheels — making the brakes hard to finesse at times. But there’s no denying their power, boasting a 60-0 mph stop of an Alfa-claimed 102 feet.

Steering and braking sensitivities aside, the Alfa’s performance shines like a nimbus in a renaissance painting: Urgent thrust, 50/50 weight distribution, pliant suspension, go-kart steering. Consider one Alfa promise kept: The Giulia really engages its driver. Enthusiasts eager for some Italian romance might return the favor and put a ring on the Alfa, no pre-nup required.