The Lexus RC200t Is a Counterfeit Performance Coupe 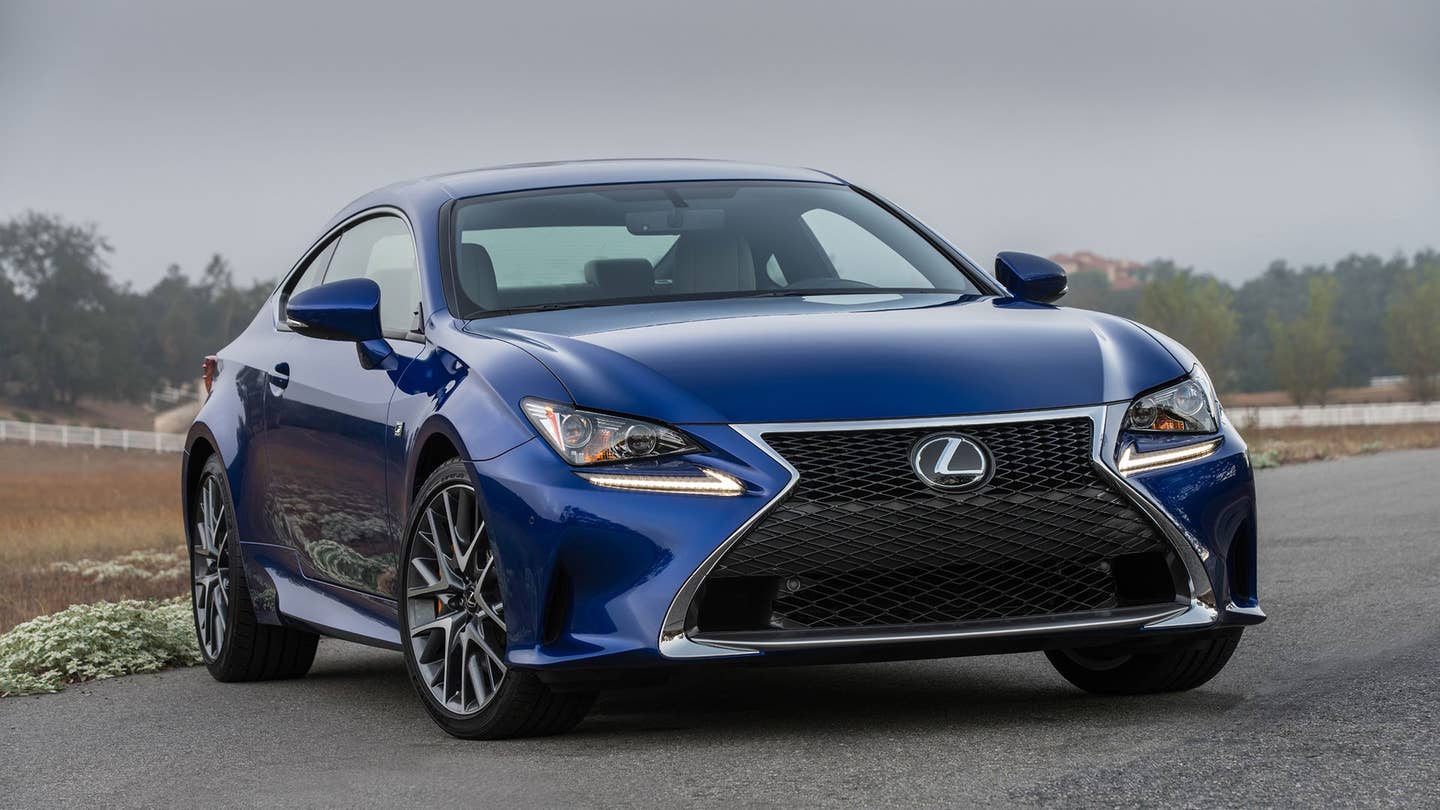 Muscle cars, luxury cars, sports cars: You can barely pop a hood without finding a four-cylinder engine. One reason is that automakers are under the gun to boost fuel economy and cut emissions. Another is that downsized engines open a more-affordable path to ownership, whether for a Mustang or a Mercedes.

Yet no one wants a barking dog, either, especially when the pooch in question, the new RC200t, can barely outrun a three-legged Toyota. Between its chubby, 3,737-pound curb weight, vague handling, and a silky-but-soporific 2.0-liter turbo four, the 2016 RC200t is a front-runner for an “all show, no go” award.

When the most memorable thing about a sport coupe is a clever LCD driver’s display—a chronograph-like center dial that pivots rightward to reveal secondary controls—you know there’s a problem. (Actually, the car’s “Infrared” paint, which any Sixties hot-rodder would identify as “candy apple,” deserves a shout-out as well).

If performance battles were fought on paper, the RC200t has numbers on its side: Lexus quotes 241 horsepower and 258 pound-feet of torque. Coincidentally, BMW’s TwinPower four, which motivates a showroom’s worth of Bimmers, including the rival 428i coupe, serves up a near-identical 240 horses and 255 pound-feet. Both cars compress intake air with fancy twin-scroll turbos, and both offer the same eight speeds and paddle shifters for their automatic transmissions, though BMW buyers can also choose a six-speed manual.

So why does BMW feels like it’s got 50 more horses than the Lexus, and a similar edge in torque? The BMW 428i clocks 0-60 mph in a sprightly 5.5 seconds, while the Lexus takes 7.3 seconds to dawdle to freeway speed—that's just three-tenths quicker than a Toyota Camry Hybrid. Audi’s 2.0-liter turbo, which makes just 220 horses and 258 pound-feet in the A5 coupe, also flexes stronger real-world muscles.

Lexus’ turbo four is certainly a welcome replacement for its decade-old 204-hp, 2.5-liter V6. That cellar-dwelling lump powered the RC’s mechanical cousin, the IS 250 sedan, until this very year. But while Lexus’ four-banger is impeccably smooth and less thirsty than the old V6 (at 22/32 mpg, versus 23/35 mpg for the BMW), it lacks both sound and urgency. It’s a dutiful engine, not an emotional one, just as in other applications including the IS sedan and NX crossover.

The trick with four-cylinder engines is to surround them with a great (and ideally lightweight) chassis, tactile steering, and suspension that can make the most of modest power; if you're feeling great while flying through curves or down the freeway, it doesn't matter if it took you a few more seconds to get there. That's what BMW has done with its fours, as has the Mustang, and Audi in a whole range of four-cylinder offerings. Porsche will try next with four-bangers in its Boxster and Cayman. But the Lexus turbo’s “meh” personality is exacerbated by steering, throttle, transmission, and suspension that seem designed more to isolate than excite. The Lexus feels like it has opioids running through its veins, and at the hands of this junkie nurse, the driver is equally sedated. The Aisin eight-speed transmission oozes through gears like a Nineties Buick, while the over-assisted steering twirls, disconnected from road and reality. The brake pedal is like stepping into week-old cottage cheese. Even shifting the console lever to manual mode or working the steering-wheel paddles doesn’t rouse the Lexus, which loves to deny a downshift, or an upshift well before the already-stingy 6,200-rpm redline.

A $4,105 F Sport package was the lipstick on this pig, with an adaptive variable suspension, limited-slip differential, and handsome but superfluous 19-inch wheels with summer tires. As with the previous-generation Chevy Camaro V6, this Lexus’ ratio of high-traction tire to wimpy power is all out of whack. The result is oodles of boring understeer, but never enough propulsive force to help rotate the car.

Adaptive settings are the Lexus’ imaginary friend, whose performance contours exist only in its mind: Toggling from Normal to Sport to Sport Plus nicely firms up body roll, but otherwise, the performance needle barely budges.

Romping on two-laners near the New York-Connecticut border, I eased the Lexus up to a rocketing pace, and had this nagging thought through curves: I’m good for now, but if a squirrel runs out in front of me, I’m going to put this thing in a ditch. It’s the kind of car whose shortage of road feedback, including that soggy brake pedal, inspires caution rather than confidence.

The crazy part is that the RC isn’t especially luxurious, in the traditional Lexus fashion that could help forgive some performance faults. Seats are shapely and smartly leather-wrapped. But carbon fiber trim is painfully ersatz in a car that reached $50,575 after options. And the Remote Touch infotainment system remains the brand's cross to bear—or to get innocent customers to carry for them: An ergonomic nightmare and a hazard to both mental and physical health. Finding and presetting a single radio station can require start-overs and literally dozens of key strokes. Call up the audio or other main screens, and the Lexus constantly reverts back to its map view, whether or not you asked it. Simply zooming a map at one point took me three tries—the unholy drawing-pad cursor skipping off course with every ripple in the road—and probably eight seconds of eyes-off-the-road.

If you're sold on the RC’s style, I’d suggest at least skipping up to the RC 350 version, which nets you a 306-hp V6 for just $2,800 more to start. Better yet, just skip the RC altogether for a lovely, dramatically better-performing BMW 4-Series, Audi A5, or Cadillac ATS.

All told, I can’t remember the last time I drove a $50,000 "sporty car" with so little entertainment value. It makes me wonder whether Akio Toyoda, the race-driving Toyota chairman who’s been promising us more exciting cars, actually drove and signed off on this counterfeit performance coupe. I actually hope the answer is no, in the interest of plausible deniability.