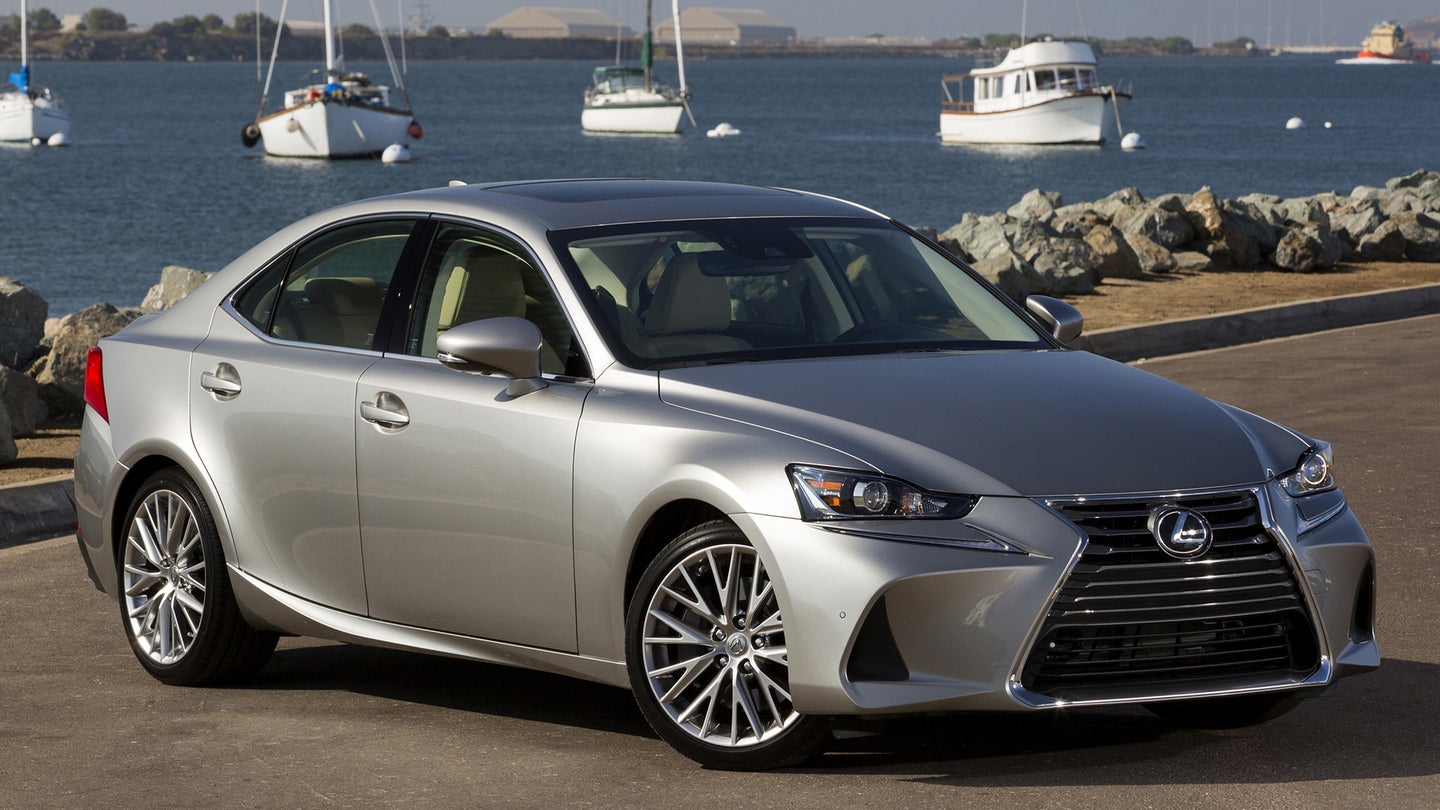 The 2017 Lexus IS 200h is the logical entry-level Japanese sport sedan. It may be the base model and pack less power than the other Lexus IS models, but it still looks good, rides nicely, and is plenty of fun to drive...y'know, for a Lexus with a four-cylinder engine.

WHO IS IT FOR? Middle-managing millennial brought up on Japanese cars looking for a fun sedan from a brand fancy enough to impress their Bumble dates.

WHERE DID WE TEST IT? The interstates, parkways, and backstreets of New York and New Jersey.

THE FIRST THING YOU NOTICE IS: The current Lexus IS still looks fresh, even a few years on.  The Akira-meets-Avalon look plays well in the increasingly generic luxury sedan field. Kudos to Lexus for giving different faces to its four-doors, as opposed to the one-look-many-sizes policy followed by many of its competitors.

THING THEY DON’T WANT YOU TO NOTICE, BUT YOU DO ANYWAY: The Lexus infotainment display is as unintuitive as ever. Whoever thought a driver should be operating a joystick that controls a cursor while piloting a vehicle should be tarred and feathered. To add insult to injury, the graphics look distinctly out-of-date compared to the best systems out today—like a Blackberry next to an iPhone 7.

CAR IS GOOD AT: Dealing with city traffic. The turbo engine is zippy once the boost comes up, helped by the quietly competent transmission. The ride is comfortable, but not at the expense of handling. And the compact proportions make it a cinch to park—or snake through traffic.

CAR IS BAD AT: Holding anyone larger than Danny DeVito in the back seat.

WOULD YOU BUY IT? It wouldn't be the top of my list in this category, not when you can get a 330i or an A4 for similar money. Those cars may not be as powerful, but as daily drivers with one eye on the B-roads, their interiors are friendlier, and they look a little more upscale than the boy racer Lexus.

That said, if it's your cup of tea, the 200t is a solid deal - especially compared to the rest of the IS line. The turbocharged four gives up little compared to the beefier 3.5-liter V6; indeed, it seems improbable that Lexus wouldn't consign the midrange IS300 and its 255 hp to the CPO lot the first chance the company gets. That variant's sole advantage is its available all-wheel-drive—a curious omission on the turbocharged model, given that feature's popularity in the luxury car category these days. But if you can live without that, the 200t seems like the value pick of the IS line.

DEEP THOUGHTS: As much as I like to consider myself a fan of larger, naturally aspirated engines in luxury cars for their linear power delivery and general smoothness, I have to admit, the turbo four suits this Lexus well. Part of that is because, apart from its big V8 and the screaming V-10 in the LFA, the carmaker's engines are pretty vanilla, shared with Venzas and Highlanders. But it's also because a boosted four plays into the whole "reformed ricer" vibe the IS puts out. The IS always felt like an incredible chassis in desperate need of an internal-combustion soul mate, stuck in a bad relationship with a Camry engine. This new motor isn't the perfect match...but it definitely feels like a better fit.

This Lexus IS Sriracha Commercial is Perplexing and Entertaining

What do the two even have to do with each other?