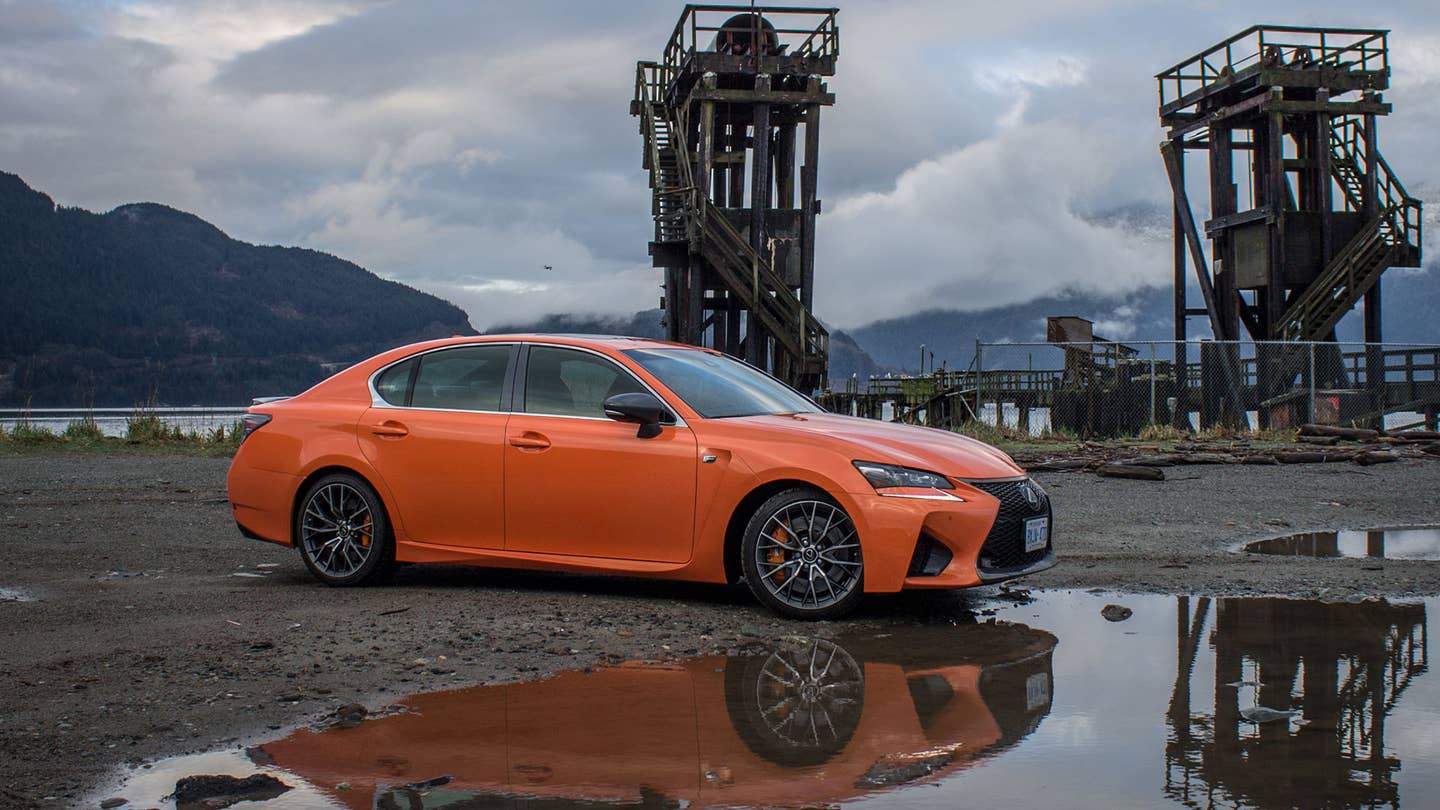 Sung to the tune of The Dukes of Hazzard theme song:

Just a luxury brand / never meanin' no harm / came over from Japan, beatin' Germans was the plan, that's how F-Performance was born.

Orange—very orange. Color-wise, this belligerent sedan from Japan sits somewhere between a traffic cone, the General Lee, and you-know-who's spray tan. Also, there's a big ol' V8, rear-wheel-drive, and a quarter-mile time in the 12-second area. Weld up the doors and she'd be a real purty flyin' machine for the Dukes of Toyoda.

A car sung in the tune of a Waylon Jennings voice-over is a departure for Lexus, a company that makes its daily bread selling jacked-up Camrys with lovely interiors, ho-hum infotainment, and the berserker grille of a 1961 Plymouth Fury. The company may have started out selling an E-class clone with Toyota reliability baked in, but Lexus is now most absolutely a crossover brand. They sell the RX and NX in droves, each one a total milquetoast behind the wheel despite the oni demon mask nailed to the front end.

However, in the GS-F we have some bona fide road-scorching capability to back up that gawping spindle grille. Under the bulging hood you'll find a 5.0L V8 making 467 hp and 389 lb-ft of torque. The wheels are spidery, glittering 19” forged alloys that look like a ninja's caltrops. Behind them lurk 14.9” Brembo brakes equipped with six-piston brake calipers. (Those calipers, unnaturally yet fittingly, are orange.)

But make no mistake: this is no M5-fighter. While BMW decided to chase AMG with twin-turbo power and enormous forced-induction torque figures, the GS-F remains a naturally aspirated affair. Remember the champagne flutes balanced on the hood in the original ad for the LS400? Consider this car, relentlessly eye-searing as it is, to be have that same highly crafted and effervescent approach to performance; it doesn't have the outright thrust of the BMW, but there's a subtlety to the power delivery.

Well, sort of. Four-thousand-plus pounds of dayglo orange isn't ever really going to be subtle, but it can represent a certain balance. Even if it's down on power next to the mit turbolader Germans, the GS-F is light(ish) on its feet. It's only 75 lbs or so heavier than the RC-F coupe and, thanks to a torque-splitting rear axle, is actually happy carving a damp n' wriggly country backroad. It also sounds great, a sake-hauling moonshine-runner pouring into your ears as the revs climb past 7000rpm.

AMG needs all-wheel-drive to harness their space-rocket motors. BMW's M-performance means both maximum thrust and a mass-heavy presence. Here, F stands for something you might not expect from a Lexus: Fun.

Straightenin' the curves / Flattenin' the hills / Someday Akio might get 'em but the law never will...