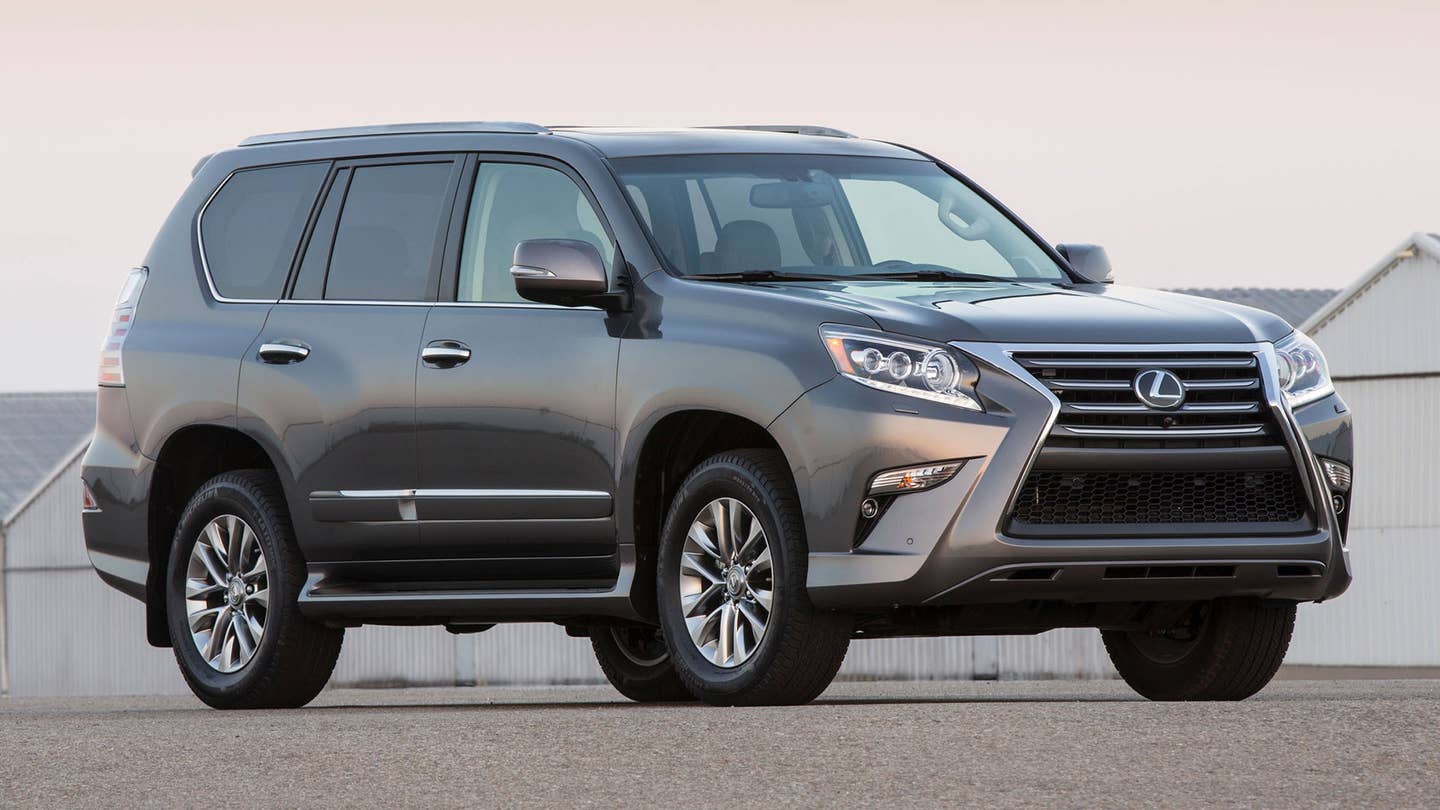 WHAT THE HELL IS IT? Lexus’s old-school, gray-at-the-temples luxury SUV with room for four adults ... and maybe two tiny humans, assuming no one has much luggage.

WHO IS IT FOR? Status-conscious upper-middle class suburbanites who want Range Rover capability with Toyota reliability.

WHERE DID WE TEST IT? Four of the six New England states.

THE FIRST THING YOU NOTICE IS: That ginormous spindle front grille, which looks big enough to use as a spool for one of the Brooklyn Bridge’s main suspension cables.

THING THEY DON’T WANT YOU TO NOTICE, BUT YOU DO ANYWAY: It’s riding on comparatively teeny 18-inch wheels. Great for ride quality, not so good for style.

CAR IS GOOD AT: Blending in with the rest of the yuppie SUVs blasting up and down the highways from Vermont to the Tri-State area at ticket-worthy speeds during the Thanksgiving weekend. Car nuts might be able to tell the difference between this vehicle and any other Lexus, but odds are good your average state trooper can’t.

CAR IS BAD AT: Getting decent fuel economy. The only time my tester came near the 18-mile-per-gallon highway figure during the 800-plus miles I spent behind the wheel was when I was coasting downhill.

WOULD YOU BUY IT? Probably not. The off-road capability is certainly appealing in an era when SUVs are generally moving away from those traits, but the aging infotainment and interior design and poor fuel economy make it a tough sell.

DEEP THOUGHTS: The Lexus GX is the luxury SUV version of the grizzled, aging prizefighter who’s not as fast as the younger boxers, but manages to hold his own through grit, moxie, and some old-school moves. It’s basically Rocky Balboa in Rocky V.

Where most fancy sport-utes have moved to unibody chassis and simple all-wheel-drive systems, the GX toughs it out with an old-school body-on-frame setup and a permanent four-wheel-drive arrangement with a locking limited-slip center diff and a mechanical low range available at the flick of a switch.

If that sounds rather like a Land Cruiser, well, give yourself a cee-gar: the GX is heavily based on the Land Cruiser Prado, a smaller version of the iconic off-roader sold pretty much everywhere but North America.

Of course, “smaller” is a relative term. This is still a big chunk of sheetmetal, standing more than six feet tall (and equally wide), stretching more than 16 feet long, and weighing in at 5,130 pounds before being stuffed with humans, pets, and JV soccer equipment.

But like the Land Cruiser (and unlike most of its competitors), the GX 460 comes ready to hit the trail. In addition to the powertrain mechanicals, it comes with what Lexus dubs “Crawl Control”—the company’s own version of the low-speed off-road cruise control used by the likes of Jeep and Land Rover. The adjustable suspension can be raised or lowered on command, and unlocks the stabilizers bars while off the beaten path for independent wheel movement.

The GX 460’s V8 may be down on power compared with many of its foes, but its naturally-aspirated nature makes it easier to control the throttle with the sort of pinpoint accuracy that would be handy for off-road work. Sadly, the brakes don’t share the same forgiving nature. The first inch of pedal travel does far less than the second, and the abrupt shift between them makes it hard to keep the Lexus from doing the herky-jerky in stop-and-go traffic.

The interior is comfortable, if aging. The infotainment system predates Lexus’s loathed Remote Touch system and its damned mouse-trackpad hybrid, which is a plus; that said, it looks every bit a relic from the pre-iPhone years. The rear captain’s chairs are very much sitting atop the chassis, rather than nestled inside it. And the glossy mahogany trim seems like a 1990s throwback compared with the gorgeous wood found in the likes of BMW, Mercedes, and Audi.

If you’re looking for an 8/10ths-scale Land Cruiser, the GX 460 is dynamite. But unless you plan on spending a lot of time navigating the backwoods in your luxury SUV, you’re better off looking elsewhere.

Dated but gets the job done.

Plus, the perfect fly-fishing kit and canned lattes from La Colombe.