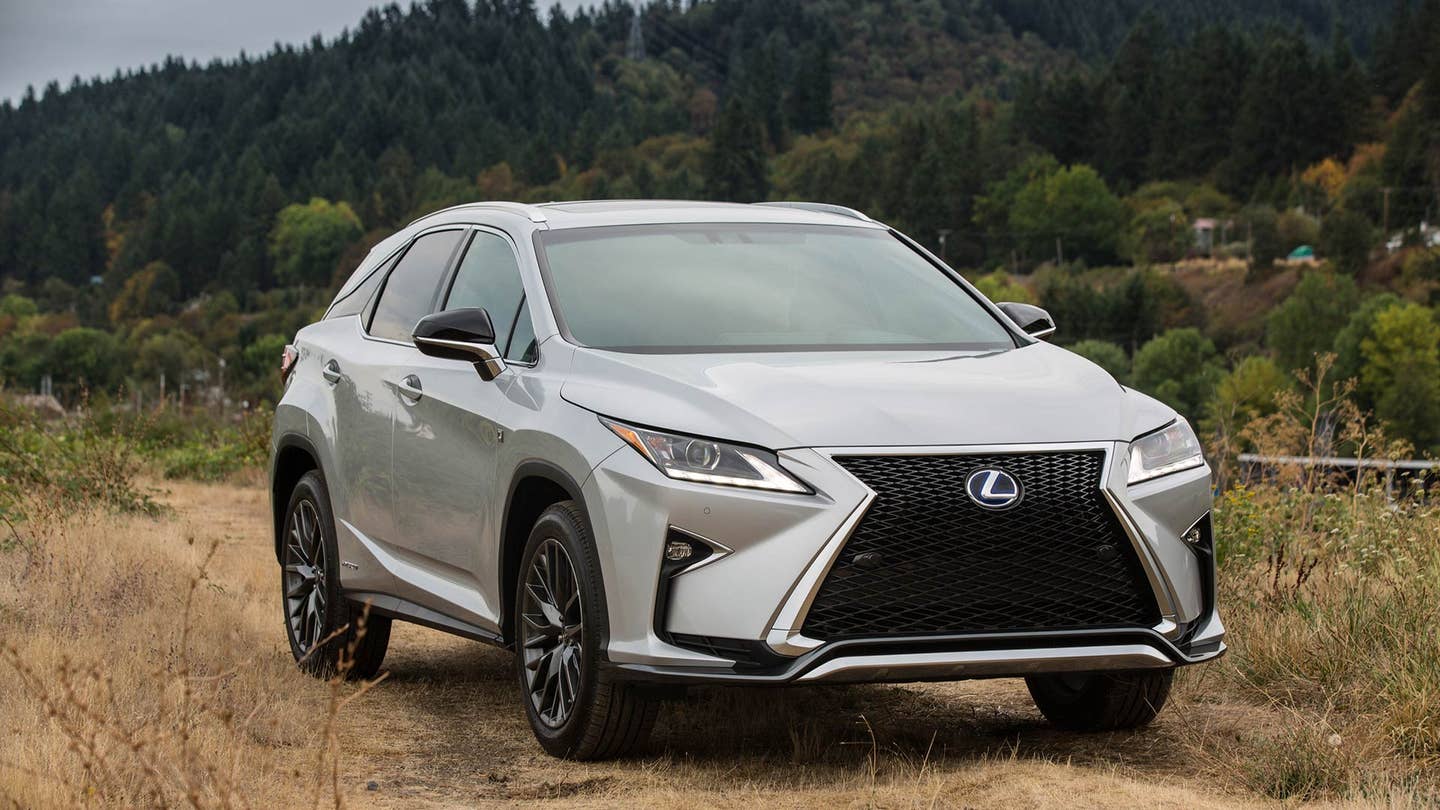 This intersection in Syosset, Long Island could be any suburb, anywhere. Orderly houses, mall sprawl, parking for miles. It says everything about how SUVs have come to own (or lease) the American landscape. Sitting at a stoplight, ready to hum off on battery power, the Lexus RX450h hybrid is hemmed by a BMW X5, Jeep Grand Cherokee, Lincoln MKX and Acura MDX. Competitors all, and not a sports car in sight.

This restyled 2016 Lexus must be the homeliest of this idling bunch. Between its bumptious spindle grille and hectic, horned-toad creases, the RX offers the most useless geometry since junior high. But its Lexus and Toyota parents won’t mind, because its honor student will always ace math: The RX is a lock to outsell the aforementioned rivals, along with the Mercedes GLE, Volvo XC90 or new Cadillac XT5—exponentially, in most cases. In America, only two luxury vehicles manage to find 100,000 buyers in a year. Those two luxury vehicles are the Lexus RX and the BMW 3-Series.

So it’s almost impressive to see Lexus go all experimental on the RX’ redesign, like some Japanese Georges Braque, at the risk of alienating its bourgeoisie audience. Oh, who am I kidding? Lexus RX fans are like theWalking Dead of auto shoppers. They’d stumble past three German dealerships and the decomposing corpse of Lincoln to swarm another Lexus. Yes, it’s a no-brainer.

Just a few more calumnies, then, and I’ll get to the good stuff: The Lexus’ mouse-like Remote Touch controller, despite minor upgrades, remains the most hapless infotainment interface in the industry. Imagine plucking a pancreas in Operation while trying to drive. This thing makes Cadillac’s CUE or Jaguar’s ancient touchscreen look like Steve Jobs’ best 3 a.m. epiphanies. At one point, including a start-over demanded by the controller’s volatile operation it took more than 30 keystrokes to scroll to a radio station and enter it as a preset. And while one theory is that such controllers can reduce proliferation of controls, the RX has 83 switches and pushbuttons, spreading like measles across its front doors, steering wheel, center stack and console.

But the rest, as long as you weren’t expecting BMW handling, is damn good. (And I’ve yet to hear an RX owner say, “I’m really disappointed in the handling.") Instead, they say the RX is bulletproof, the ideal family car. Or that “It’s like driving your living room down the street.” That’s exactly what a former owner, on his way to golf in Orlando, said when he saw my RX 450h hybrid as we boarded an airport shuttle—right after he confused the Lexus with a Honda, expressed reservations over the styling, but said he’d probably buy one anyway. (Can I get a job selling the RX)?

Lexus’ living room is quieter and better-decorated than before, in an RX that’s grown five inches longer, though there’s still no third row. My hybrid featured a snazzy maroon leather interior; a 12.3 inch split-screen display is a new option, perched like a drive-in screen atop the dash. Too bad mine was just the standard 8-inch version contained within a larger frame, a permanent reminder of a buyer's stinginess. One clever new feature involves a secret handshake: Hold a hand over the translucent Lexus badge at the rear to open the liftgate.

Using the Lexus as intended, I chauffeured my nine-year-old daughter on a daytrip to a trampoline center, and was pleased to find the RX no longer sproings and wallows over challenging pavement. The RX 450h sponged up potholes and expansion strips with aplomb, even on optional 20-inch alloy wheels. RX handling remains soft, but no longer sleepy, especially with the optional F-Sport treatment, whose many additions include adaptive dampers. This latest Hybrid Synergy Drive makes a peak 308 horsepower, with dual electric motors—plus a third electric motor powering rear wheels independently in AWD versions—mated to a 3.5-liter V6 and an old-school nickel-metal battery. It still rewards and encourages steady, light-throttle cruising; with the gas engine shut down, the RX rolls downhill as hushed as any Bentley or Rolls. But unlike, say, a Toyota Prius, it’s possible to drive much faster without the system resisting forward progress. Figure a 7.7 second run to 60 mph, same as the 295-hp RX 350, with surprising reserves of electric-boosted power for highway overtaking.

For me, the real pleasure came from maxing out mileage: This is the rare hybrid SUV that delivers on its promise, including a 30-mpg rating in combined city and highway driving—a nice leap over the 22 mpg of the all-wheel-drive RX 350. That’s best in class by a good margin, with the diesel-powered Mercedes GLE d 4Matic closest at 26 mpg. Even in the on-off spigot of Long Island traffic, the Lexus showed me a stellar 31 mpg over three hours of city and highway driving.

The cheap-gas phenomenon does the hybrid version no favors, especially with a base price that’s soared to roughly $10,000 beyond comparable all-wheel drive gasoline models. Roughly $5,000 of that is for the hybrid tech, the rest for luxury stuffing you’re forced to consume. Fortunately for Lexus, there’s still the RX 350, for which the selling is always easy.