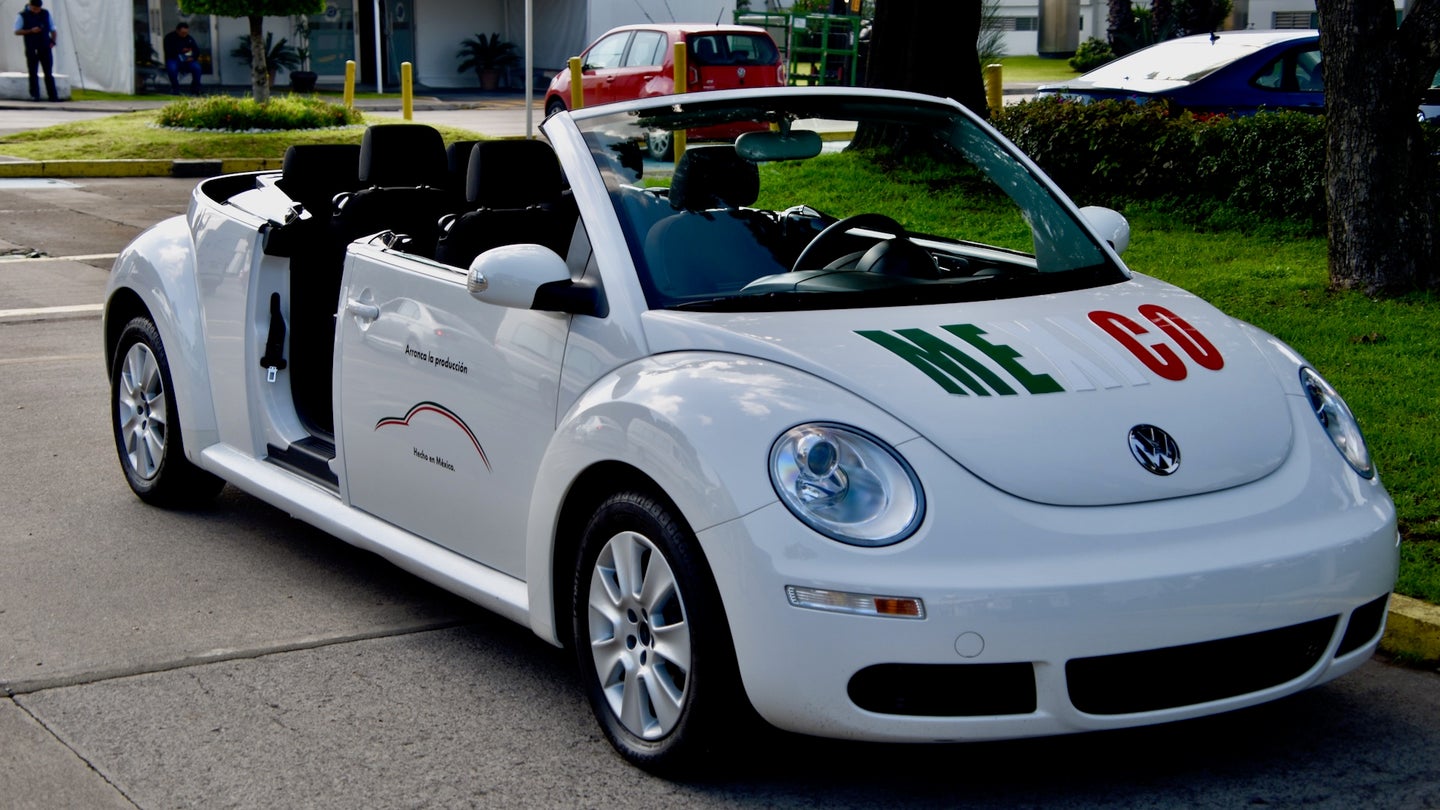 If you ever find yourself wandering the world's second-largest Volkswagen factory in Puebla, Mexico, you'll see some true oddities among the facility's bizarro fleet of vehicles set aside for plant tours. The squad is mostly comprised of roofless, water-cooled Type 2 buses nicknamed "Hannibal," but there's also a black sheep in the factory fleet. A very long, very white black sheep. Meet the three-row VW Beetle Cabrio—and yes, VW actually built it.

It has no name, so let's come up with one. Neew Beeetle? Threetle? It's not the only one of its kind in Mexico, where Beetle fandom runs deep, but it is the only one cobbled together by VW in some dark corner of the Puebla plant. The Threetle is a New Beetle Cabrio that was cut crosswise just behind the door to add about two feet to the car's midsection to accommodate a third row of seats. It's technically OEM, and it lives in the factory that built it, but you can't help but wonder about the fit and finish underneath. No matter—we're The Drive, so drive it we will.

It probably never exceeds 30 kph (18 mph), as it's not street-legal and that's the speed limit on the facility's internal roads. That's not to say it can't go faster, as the original four-cylinder engine and six-speed manual box aren't electronically limited, but would you really want to push it in something like this? (Editor's Note: Yes, but not while VW is watching.) Sure, the lengthened wheelbase might help absorb more bumps, but out on the dense streets of Mexico City and the country's highway network at large, the Threetle feels like it'd be as graceful as a grand piano descending a flight of stairs unassisted.

How does it drive? Like a New Beetle, which is to say, like a Golf...which in turn is to say, "fine." The front seats are shoved forward to provide enough legroom in the rear rows, so the driving position involves almost squatting over the pedals, which are impossible to operate in dress shoes. Acceleration—at least from 0 to 18 mph—feels as slow as you'd expect for a Beetle carrying all that junk in the trunk. But there's a definite novelty to driving a stick-shift stretch limo, even before you factor in the weird form.

However, the way the car reacts when you crank the wheel is peculiar. With their short wheelbases, every normal Beetle out there gladly changes direction commensurate to steering input. This one, with its comical wheelbase and chassis rigidity akin to a free Craigslist table, doesn't. It feels almost nautical, meandering in the direction you request.

It's also not entirely well-suited to being a tour vehicle for an operational factory. Its comical length means it needs to make three-point turns in some of the plant's tighter quarters, and there's not a whole lot of room in the first and third rows. Its greatest strength—easy parallel parking—is sadly squandered in this line of work (and being a non-street-legal stretched New Beetle Cabrio, there aren't many more options on the table).

Should Volkswagen retire this car, it'll probably disappear into Puebla's onsite factory museum, with the dozens of other obscure, Latin America-only Volkswagens. We think a more fitting end for something this bizarre would be a conversion to a 24 Hours of Lemons car—or maybe a support vehicle for VW's burgeoning rallycross ambitions.