While the 2020 VW Passat's internal combustion powertrain may be not long for this world, the Arizona Proving Ground it was tested at will be. 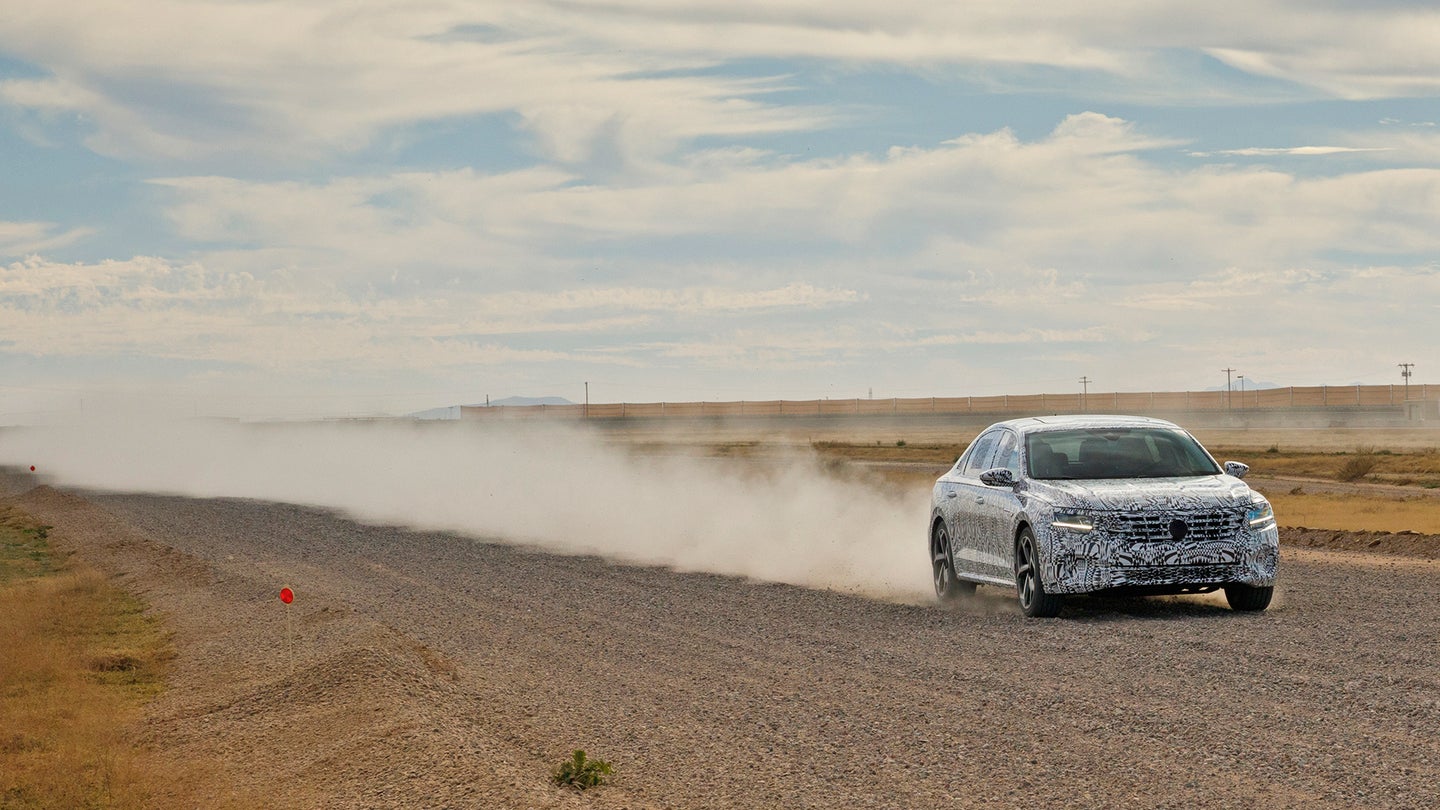 Follow the sun-baked highway south from Phoenix through the Gila River Indian Reservation long enough, and take the right series of turns through ticky-tacky suburban developments that seem to have sprouted out of the ground like sagebrush, and you’ll see it on the horizon: a wall.

No, not "The Wall," the big, beautiful one the president’s always talking about. It’s just a wall—albeit one tall and imposing enough to play Trump’s on TV. It’s as opaque as the distant Superstition mountains...but if you listen, you might well hear the characteristic whoosh of something big flying past on the other side.

To find out what’s behind the wall, you’ll have to pass through the entry gate to the anonymous complex. The buildings are blank and windowless; the guards wear brown uniforms with the logo of a private security company. The only clue as to what’s inside lies on the multilingual warning signs mounted to the fence; uncharacteristically for the American Southwest, they're also written in German. You’ll have to check your cameras at the door, as well as your guns; this is Arizona, after all. (There’s a cement-filled barrel by the guard shack specifically for ejecting chambered rounds into.) Stickers go over all the tiny lenses in everything else: cell phones, tablets, laptops. You’ll have to sign form after form, agreeing to draconian policies designed to discourage people from sneaking any image out of the complex.

Then, and only then, can you enter Volkswagen’s Arizona Proving Grounds.

Your humble author was among a small group of auto writers to penetrate VW's testing sanctum sanctorum—only the second group of journalists ever allowed a tour in the nearly 26-year history of the place. The previous group had arrived just last year, to taste the 2019 Jetta for the first time; we were here for similar reasons, to be the first from the media world to sample the new 2020 Volkswagen Passat.

Unlike that all-new Jetta, the 2020 Passat that goes on sale next year is a late-mid-life cycle refresh, an update on the NMS (or New Midsize Sedan, as VW cleverly calls it) platform the carmaker developed specifically for the US market and began cranking out of an all-new factory in Chattanooga, Tennessee back in 2011. That sedan—larger, less expensive, and less sporty than the version sold in Europe—has been good to Volkswagen of America; the company has sold more than 558,000 of them in the last seven years. And while many mainstream manufacturers are abandoning the four-door space to concentrate on more popular, more profitable SUVs and trucks, this refresh shows Volkswagen has no plans to abandon the sedan the way it plans to eventually abandon the internal-combustion engine. (Should things go truly pear-shaped for the midsize family sedan class, of course, VW also makes the Atlas crossover in Chattanooga.)

But while we were officially there to drive the new Passats under extraordinarily controlled conditions—more on that in a bit—the Arizona Proving Ground has appeal all its own. Not the workspace first seen upon entry—an open-office layout of faded whites closing in on yellow, the only color coming from the coffee pot handles and the bright blue poster demonstrating how to identify the area’s myriad rattlesnakes—but the spaces beyond. Step outside into the lots behind the building, and you’re met with a car spotter’s nerdy dream: sure, Passats and Jettas, but also cars from the entire VW portfolio, from all across the world—Seats and Skodas parked next to Chinese-market VW station wagons parked beside Bentleys. Some cars are literally undercover, still-secret new models clad in loose synthetic fabric that tantalizingly clung to the occasional distinguishing detail, panty lines beneath a flowing dress. A cloth hangs alluringly off the tail of a new Lamborghini Huracan variant, the edges of its stealthy frame holding the corners of the cover taut.

Of course, most of the prototypes were hidden even further away, cleared out and shoved into hidden back rooms and behind fences wrapped seamlessly and completely in concealment. Mechanics pop in and out of one such chamber of secrets, while I try in vain to maneuver myself for even the smallest peek inside. No dice. So much for an early Christmas present.

Our tour guide, senior facility director James Marsella, steers us instead over to another set of chambers—the windowless garages used for corrosion testing. Check that; calling them “garages” is a bit of a misnomer. A garage is a structure designed to protect a vehicle from the elements; these custom-made rooms, each one a box big enough for two to four vehicles, exist to blast vehicles with concentrated bursts of it to speed up corrosion. Think of it as a time machine for rust. One regimented 90-day cycle through the chambers, Marsella says, is equivalent to 12 years on America’s East Coast.

The first room we enter is 125º Fahrenheit and 100 percent humidity; amusingly, all the assembled journalists are wearing glasses, which fog the moment we pass from the arid Arizona air to the swampy indoor atmosphere. The second is a cold chamber, the temperature set to -4º F and mighty fans blasting away to keep the air circulating. I step inside and I’m 17 again, working my summer job as a tour guide at the Ben & Jerry’s factory, trudging into the deep freeze to fetch a new batch of Strawberry Cheesecake for the sample room. The third room is what’s described to us as a “salt fog” chamber; the air in there is a thick London fog as opaque as an actual raincoat. Four steps in, arms extended zombie-like, and I can’t see my hands. The air tastes like fresh oysters.

Once the cars make it through their three months of CIA black site torture in the chambers, they move to the final room, a tall, white room filled with strobe lights and a bank of computers. Here, VW’s experts rip the cars apart, spot weld by spot weld—no saws, no jaws of life allowed—to peel back each layer of metal in search of corrosion. Like archaeologists on a dig, they painstakingly document every single piece of metal, photographing and cataloging it, at which point a team of experts working on computers grade how bad the corrosion is. All 355 models the VW Group makes has or will come through here at some point in their life cycle—except a Bugatti, Marsella says with a smile—and after the analysis is done, the engineers who developed the car will be summoned to see what the guts of their creation will look like after a dozen years in Boston.

The appetizer has been unexpectedly delightful, but it’s time for the main course, so Marsella and the rest of the VW team walk us over to the pair of 2020 Passats nearby. The crew peels off the thick black disguise fitted over it, like a triumphant auto show debut…only to reveal that the cars are still wrapped in a dazzle camouflage pattern, obscuring almost every detail. Still, a few things are clear; the new front end is indeed more Jetta-like, with a hint of the broad waterfall grille appearance found on the Arteon. That grille appears larger than the old version, while the lower fascia brings what seem to be faux air intakes beneath the headlights. Out back, the biggest apparent change on the camouflaged cars was the new taillights—everything else looks more or less unchanged.

Inside, to keep us from glimpsing what the company’s reps swear will be an elegantly revised dashboard setup, VW cloaked the whole area in black felt, obscuring everything but the instrument panel. That said, they didn’t say anything about touching the dash, prompting me to slide my hands underneath the Muppet-skin cover at the first possible opportunity. Based on my fingertips' impressions, the strip of plastic patterned to resemble Audi's elegant pinstriped gray wood trim found on the car's doors and alongside the steering wheel runs across the whole dash, blending into the air vents where they crop up. Entertainingly enough, even the logo on the steering wheel is covered; subsequent fingertip analysis of the shapes beneath the black tape is enough to confirm, however, that VW has no plans to ditch the logo it's used since the end of World War II.

The route prepped for the journalists gives us an amuse-bouche of the facility’s various driving tests: washboard dirt roads to test for shakes and rattles; a dirt-and-gravel oval for determining stability on slippery surfaces; a short handling track with a couple of abbreviated S-turns and two or three very tight curves, all of which are capable of demonstrating that the 2020 Passat has roughly the same level of handling acumen and ride comfort as the existing car. (VW admitted, before we even climbed into the cars, that they kept the driving dynamics of the previous version much the same; most of the changes amount to style and trim tweaks.) And, of course, the big kahuna, the part of the facility you can probably see from the International Space Station with a decent set of binoculars: the 4.7-mile oval made for high-speed testing. The curves on either end are banked at a steep-enough angle to let cars negotiate it at more than 130 miles per hour with the steering wheel centered. Each of the lanes has a different approved range of speeds; the minimum for the far left is 100 mph.

At the advice of the VW watcher riding in the Passat’s back seat, I drop the hammer on the 1.8-liter turbo-four as soon as we pull onto the straightaway, moving left lane by lane as the speedometer sweeps past Arizona's 75-mph highway speed limit towards unlimited-autobahn territory. While the legacy inline-four’s torque rises to 207 pound-feet for the 2020 model year, total horsepower stays at 174; still, even with three full-grown men aboard, the car picks up speed relatively briskly, churning out the familiar four-pot buzzing of a modern VW in the process. The car keeps gaining velocity well into triple digits, only slowing as the speed glides up to the soft 114-mph governor. While the steering is typically modern-VW breezy, it's more than capable of keeping of the minute corrections needed to keep the car centered on the track's curve, which, from my vantage point inside it, is banked steeply enough to bring to mind the bobsled-POV shots from Cool Runnings.

The 2020 Volkswagen Passat, based on my short time behind the wheel of a camouflaged prototype, is unlikely to shock anyone who's grown used to the current Tennessee-built NMS model. The automotive landscape, like so many ecosystems these days, is in flux; while staid Toyota has gone sporty, VW has banked hard to the mainstream, forgoing some of its athletic European roots for staid, all-American simplicity and space. It may have cost the brand a piece of its soul, but at least it keeps the company alive in an ever-more competitive landscape where carmakers are forced to preemptively eat their darling young in order to stay alive through the next extinction-level event that always seems around the corner.

Ultimately, this new Passat will be nothing more than a stepping stone to the electric car future the Volkswagen Group has staked everything on—another evolution of internal-combustion dinosaur dropped into the ecosystem even as the asteroid bears down on the planet. The VW Group has already made clear its plans to begin winding down production of ICE cars and crank out EVs in the millions before today's kindergartners go to prom.

But whatever form those cars of tomorrow may take...odds are good you'll find them being tortured in the Arizona desert, right where this new Passat was.