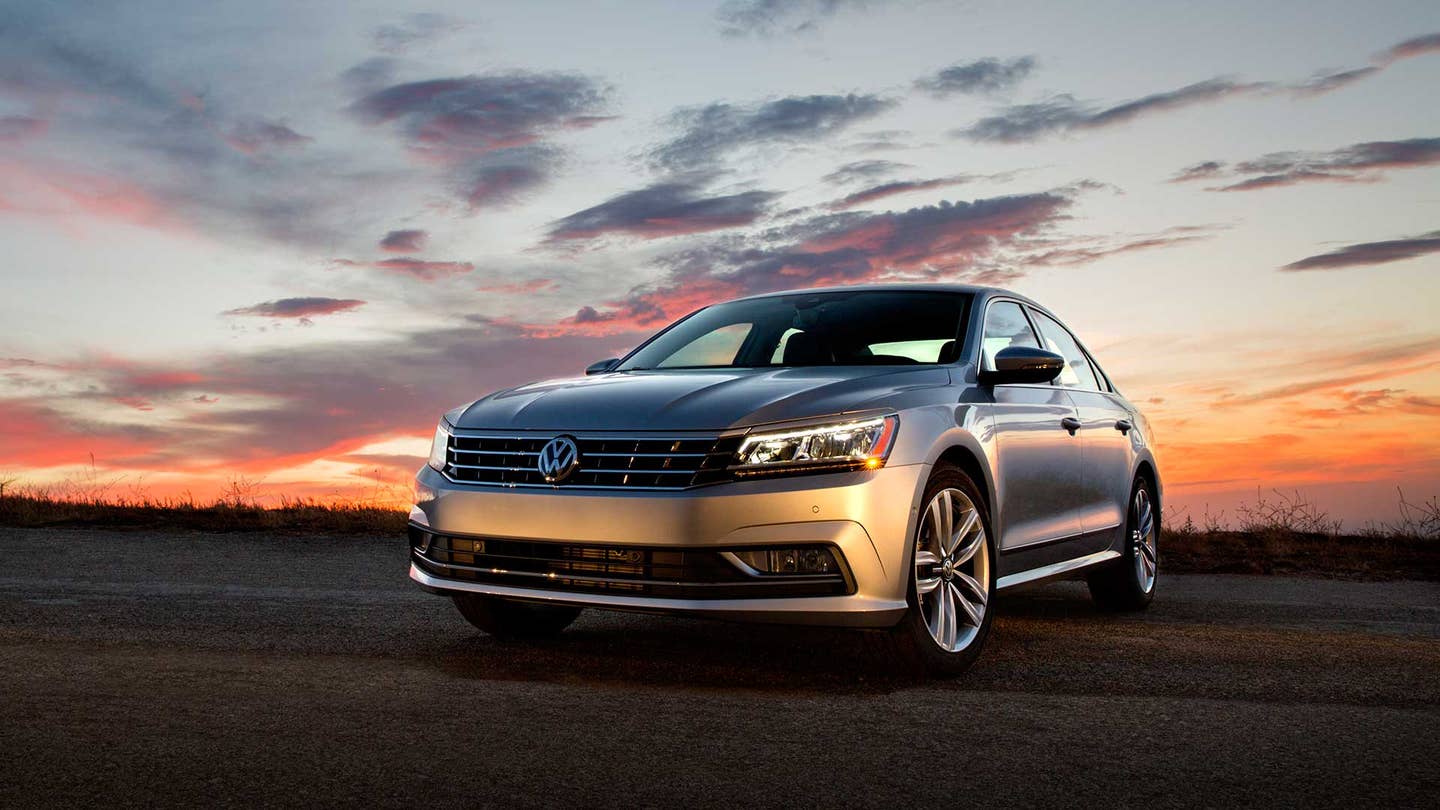 The Passat that Volkswagen currently sells is not, like its predecessors, special in its bones. It is no cut-rate Audi, or even a sized-up Volkswagen Golf. But that’s fine; it now comes with great trimmings. And it’s cheap. Before they became $22 artisan sammies, wasn’t that what everyone loved about cheeseburgers? An economical lunch of middle-quality meat covered in delicious bits of dairy and bacon is a meal made for this country.

How did Volkswagen’s once-sparkly Passat become diner food? For one, it suffered mightily under Volkswagen’s two-car solution. In 2010, facing declining sales of a previous-gen car whose Audi-sourced four-cylinder, all-wheel drive and deluxe interior delivered swank at an agreeable price, Volkswagen decided to bifurcate its family sedan.

One car would continue the pseudo-Audi’s trajectory—all-wheel drive, intricate sheet-metal, sterling interior—at a near-premium price in Europe, while Americans would receive Passat Lite: a similar-looking, simplified car, with a huge back seat, fewer tech goodies and a more brittle interior. As is usually the case (Ferrari’s jettisoning of the manual transmission, Audi stopping U.S. sales of its Avants), what was demonstrably intelligent product planning hit the brand’s most ardent fans right in the heart.

That car, developed as the “New Midsize Sedan,” debuted with a shape to match its bland codename: handsome, but with all the panache of the unbranded computer-rendered illustrations that car insurance companies use in advertisements.

The first Passat built for America, by Americans (at VW’s sprawling assembly plant in Chattanooga, Tenn.) has sold well. To date, Volkswagen has moved around half a million of its bigger, softer car, suggesting that Americans do in fact love a cavernous back seat and a pillowy ride; in every Yankee heart is a little garage, with just enough room for a Buick Park Avenue.

The game has changed, though. As the American Passat dropped features in its journey down market, Honda, Hyundai and Mazda loaded up on tech. Those companies outfitted their sedans with Apple CarPlay, radar-guided cruise control and parking sensors on every bumper. Left with a clumsy touchscreen (press, and press hard) and no USB port, the Passat was a poor cousin, its nifty four-cylinder diesel the one technological trump card. That last vestige of special European spice elevated a hollow, focus-grouped product into a torque-rich limo whose EPA highway rating, at 44 mpg, seemed, well, too good to be true.

We all by now know that the Passat’s best ingredient is spoiled, and Volkswagen has withdrawn its bid for EPA certification of the 2016 Passat TDI. It’s a major blow, akin to the FDA issuing a stop-sale on the Big Mac’s special sauce.

Though most VW product planners couldn’t have foreseen such a setback, their 2016 Passat serves up a decent, if not acolyte-spawning, consolation prize: class-competitive tech.

The suite is named MIB II, and it improves in almost every measure on last year’s system. Rather than the frustrating touch/press/poke/prod screen, the 2016 Passat’s display uses capacitive touch, which allows for swiping and zooming, as on an iPhone. That’s handy, because your iPhone’s (or Android’s) icons will be popping up onscreen thanks to Apple CarPlay and Android Auto, which seamlessly integrate top features—stored and streaming music, navigation, SMS—into the dashboard.

There’s also a heaping of driver-assistance technology which, as we found on Vermont’s rural byways, is fairly sophisticated for the segment. Collision warning and auto-braking, meant to keep distracted drivers from plowing into the leading car, were unobtrusive but present. Even driving like an out-of-towner (sorry again, Newport, Vt.), the system didn’t lapse into hysterics—just a beep or two, the timbre of which harkens back to the Passat’s fancy-pants past. The blindspot warning system, available one level up on Technology SE cars, is similarly demure.

Range-topping SEL Premium comes with Lane Assist, an active lane-keeping system I first encountered on the 2015 Mercedes-Benz S-Class. If its cameras and algorithms detect departure, the Mercedes clamps same-side brakes to force the car back; the new Passat corrects with the steering wheel, with a motion more gentle than any panicked driving instructor could muster. As we played flatlander—look, Muriel, all the leaves—and let our aim stray, the Passat gently nudged us back in place. It’s no excuse to drive lazy, but the technology is hyper-competent.

Outside, the changes are harder to spot. There are a couple more creases, thinner lights, a little chrome, but nothing that suggests the car’s newness. Inside, the dashboard gains the GTI’s instrument cluster and some silvery plasti-wood, but the blemishes on the 2015 car’s interior—hard plastics and rough edges on parts of the doors and near the steering wheel—remain. In all honesty, the cabin of a 2002 Jetta MkIV gives the impression of higher overall quality.

Until Volkswagen sorts its small diesel engines, the 2016 Passat will come with a 1.8-liter turbocharged four cylinder and a 3.6-liter VR6. The small turbo receives a high EPA highway rating of 38 mpg, and is competent if a touch slow; somehow, Volkswagen’s old 1.8T felt meatier. The VR6, on the other hand, rivals the Passat’s new tech bundle as the most compelling part of the car. At start-up, it sounds downright lusty, attributable to its pseudo-inline configuration. It’s paired with VW Group’s awesome DSG, shift paddles included, and on the roads, steaming up hills and roaring from stops, the big engine gives the Passat a hint of its old, pre-schism self. It’s a special engine that lifts the car out of midsize-sedan drudgery. But the costs—namely, $37,655 to start, and a mediocre 28 mpg on the highway—just don’t make huge sense in the segment, which would explain VW’s projected take rate of around five percent.

So the engines are good for the class. The driver-assistance tech rivals that in Mercedes’ flagship sedan. Some bits, like the shift knob and beautiful instruments, recall the Volkswagens we love, the handsome Touareg and the hysterics-inducing GTI. But the car itself is too compromised. What makes a good midsize sedan doesn’t necessarily make a great Volkswagen, and even after the diesel scandal, we hold the company to a higher standard. Keep the trimmings, but give us better meat.