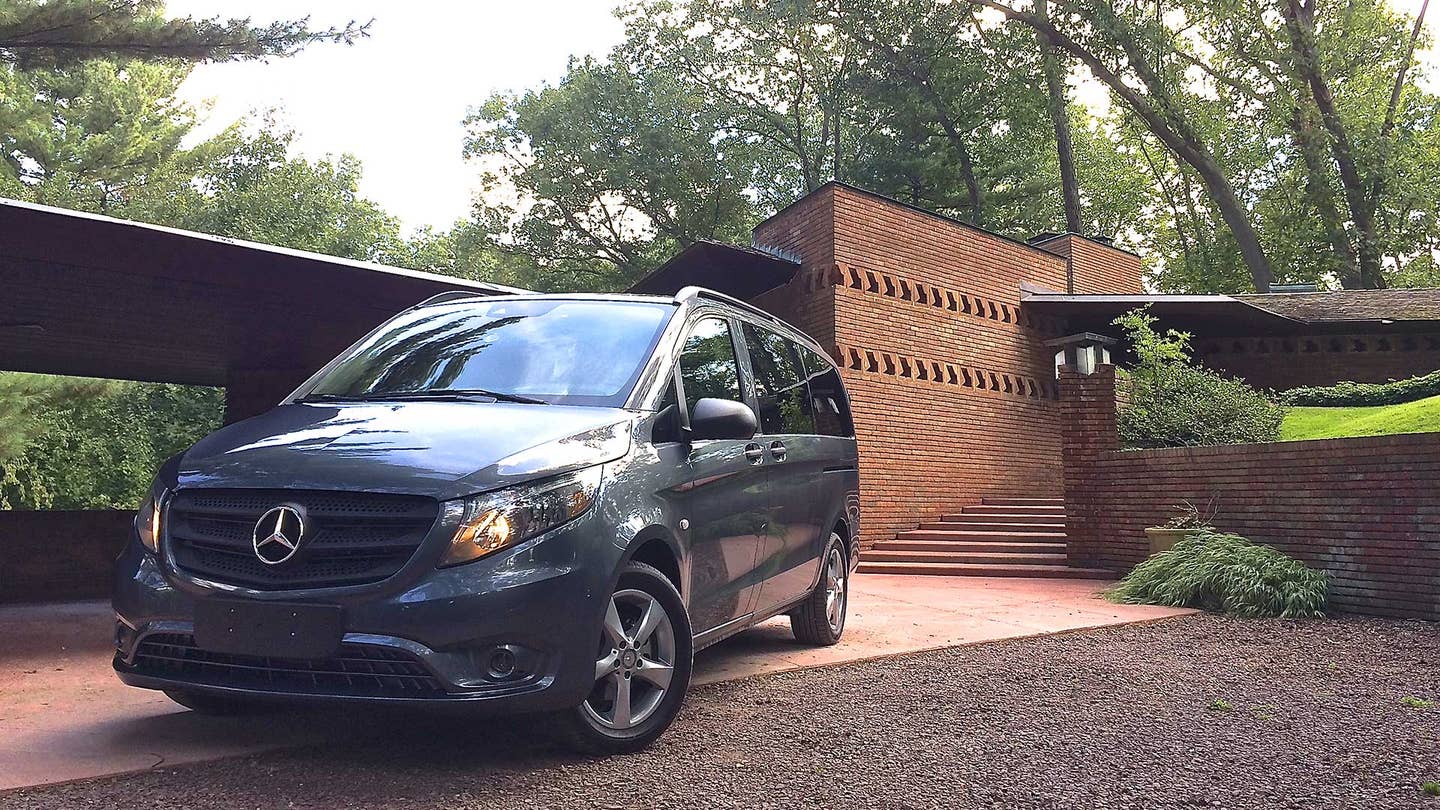 Frank Lloyd Wright’s most famous early commissions, including the Fallingwater mansion in Pennsylvania and the grand, fateful Imperial Hotel in Tokyo, were created for the very wealthy. But, inspired by the Great Depression, Wright began designing a series of more modest homes in the Thirties, ostensibly intended for the middle class.

These so-called Usonian houses all featured environmentally integrated horizontal designs, ample access to light and the outdoors, and standard-ish construction materials. They also included Wright’s combative insistence that he knew what was best for his clients in every way, and that they should attend to his design of every aspect of their life—from the way they sat to how they cooked. Ambitious features like radiant in-floor heating and flat roofs were cool, but often more advanced and sophisticated than their engineering, or owners, could handle.

Mercedes-Benz seems to be pursuing a similar strategy introducing its V-Class medium-size van, which will be known as the Metris, to the U.S. market. The midi-van, available in cargo and passenger configurations, has a giant halo-encircled three-pointed star on its grille reminding you of its pedigree. But the Metris casts its gaze on the mass market, with a starting price that’s less than a third of the brand’s signature S-Class: a hair under thirty grand, this will be the cheapest Benz available in America, less expensive even than the gateway-drug $32,425 CLA.

“The Cheapest Mercedes You Can Buy” is only slightly less compelling as a marketing platform than “As Leaky as Fallingwater.” So why is Mercedes importing this van from Europe, where it’s built? Well, because, like Mr. Wright, they think they know best.

Relentless segmentation studies show Benz that mid-size vans—bigger and more capable and capacious than minis like Ford’s Transit Connect and Ram’s ProMaster, but smaller, more efficient and more ��garageable” than something in which you’d traditionally abduct a child—are under-serving the commercial marketplace.

Stuttgart’s market analysts might be right. Sales of Mercedes’ existing full-size Sprinter vans are, like other roomier vehicles, up double digits this year. Competitors like Ford and Chrysler have imported their Euro-style full-size vans to replace ancient refrigerator boxes like the E-Series (née Econoline) and Ram Van, demonstrating the desirability of efficient, spacious aero-wedges. And the V-Class has already been in popular production overseas for around 20 years, so development costs aren’t challenging.

More than that, though, is Mercedes’ intrinsic—nay, downright Wrightian—desire for hegemony. In the Nineties, medium-size vans like the Ford Aerostar and Chevrolet Astro sold over 150,000 units annually, but their manufacturers have since abdicated that arena. Much like the Toyota Tacoma pickup, which, until the recent reintroduction of the Chevrolet Colorado and GMC Canyon, absolutely dominated the mid-size truck market, Mercedes can own this segment. “Our goal is 100-percent market share,” an M-B rep said at the press reveal. In an otherwise empty segment, that boast may not mean much. But it sounds good. And incremental sales are incremental sales.

An afternoon driving both the cargo and passenger versions of the Metris suggested that Benz should have no trouble achieving its goal. The van’s turbocharged four-cylinder gas engine—identical to that in the CLA—is smooth and quiet, driving the rear wheels via seven-speed automatic transmission. With stop/start technology, Mercedes claims this combo should yield a respectable 22 mpg in combined city/highway travel. (EPA certification has yet to occur). The Metris has all sorts of standard and optional safety gewgaws like lane keeping, crosswind assist and active parking. And it comes with the lovely steering wheel out of the C-Class, as well as offering other M-B amenities like the the S-Class infotainment interface, lending an air of exclusivity.

But mostly Americans will like it because it’s tall. That’s why we buy the vehicles we do, now—crossovers, cute utes, SUVs—because they provide a higher seating position and make people feel safe. (Never mind that higher centers of gravity generally make vehicles less stable.) Though it differs in length from everything else on the market, the Metris is almost exactly the same size as a Chrysler Town & Country. It’s just six inches higher.

We drove the Metris around Ann Arbor, Michigan, making a photo shoot pit stop at the Palmer House, a Frank Lloyd Wright Usonian that’s one of a handful in the country available for rent. It’s a beautiful brick home, punctuated by rows of clerestory windows, with a plan based on intersecting isosceles triangles. The neighborhood in which it’s located, near the University Arboretum, is wooded and sparsely populated with sweet, modern houses of the same mid-20th-century vintage as the Palmer.

It was beautiful. But it reminded us that Wright was an anti-urbanist, with a pedantic, utopian vision for automobile-dominated, pedestrian-unfriendly suburban development. It reminded us that his sympathetic and careful, if imperious, Usonian designs were forerunners of the pestilential ranch houses that carried exurban sprawl. And it reminded us that he is credited with inventing the carport, a white space into which so many suburban-oriented vehicles fit.

We like a van in the same way we like suburbia: It’s a nice idea. We tried to park the Metris in the carport at the Palmer House. It was too tall.