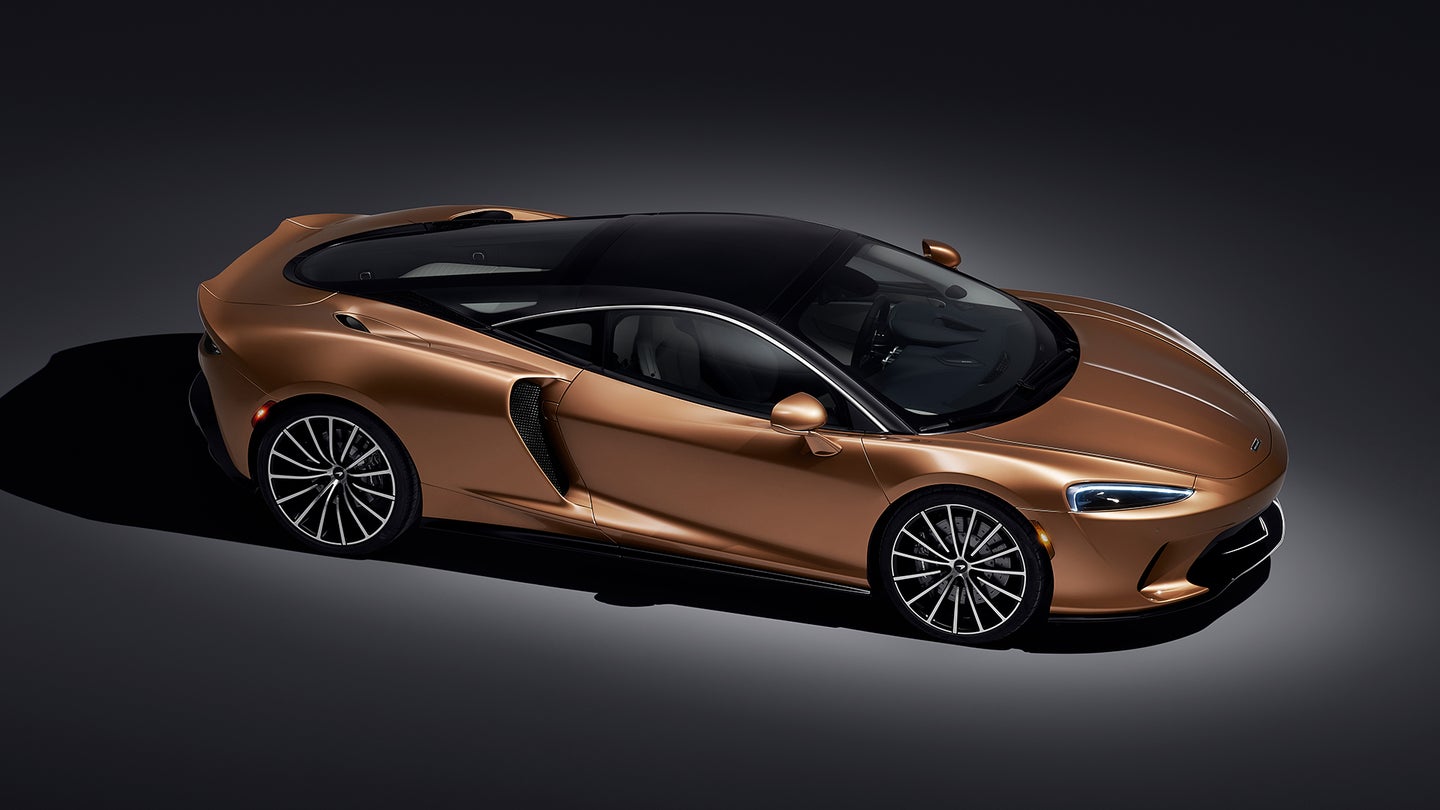 There's no automaker doing things quite like McLaren these days. As the old guard plays shell games with recycled models and dabble in SUVs, the mad hatters in Woking are busy crafting new supercars for bedroom posters the world over. This is the new McLaren GT—and with a 612-hp twin-turbo V8, an optional cashmere interior, and a capacious cargo hold, it's just asking to blast across continents.

McLaren teased the new GT by promising a car with "Speedtail DNA" and the best power-to-weight ratio in the luxury grand touring class. Though some anticipated trickle-down technology from the company's $2.25 million hypercar, those genes influenced the look of the GT more than anything else. Speedtail-esque touches like its streamlined front end and airy cabin are mixed with classic grand touring traits like those massive rear fenders to great effect.

At 184.4 inches, it's longer than any of the Sports or Super Series McLarens. Whatever it loses in parallel parking convenience—if that's even a thing—is offset in city driving by an eminently usable 4.3 inches of ground clearance and 20.1 cubic feet of cargo space. The rear hatch is built to fit two golf bags or two pairs of skis, or really anything you'd like to cram back there.

Also eminently usable: the 612 horsepower and 465 pound-feet of torque pouring from its twin-turbo M840TE V8 engine adapted from the 720S, with at least 95 percent of the torque at hand between 3,000 and 7,250 rpm. Zero to 60 mph comes in just 3.1 seconds with the help of launch control and a quick trigger finger to snap through the 7-speed dual-clutch transmission. Top speed is 203 mph.

But remember, the McLaren GT is a grand tourer. It's the lightest (3,232 lbs dry) and one of the fastest, with hydraulic steering and special Pirelli P Zero tires (225/35/R20 up front and 295/30/R21 in the rear), but it's not really built for a lap time. The proof is in the standard brakes—cast iron discs and four-piston clamps.

No, at its heart the GT has to be comfortable. So the beastly engine remains isolated from the cabin by engine mounts that are 50 percent softer than in the 720S, and the GT also borrows the 720S's predictive suspension that scans the road ahead to pre-adjust the shocks.

That should make it pretty damn smooth inside, if our experience with the 720S is any indication. McLaren goes even farther to promise the GT will be the "most refined" car it's ever made. The case is helped by the interior details: Comfortable seats designed for long-haul travel, the company's fastest infotainment system yet, an optional electrochromic glazed glass panel in the roof that lightens and darkens at the touch of a button, dual-zone automatic climate control, and yes, material choices that range from leather to cashmere. McLaren claims it's the first time the latter's been used in a production car.

The McLaren GT starts at $210,000, and orders are now open with the first deliveries planned for the end of 2019. Surprised? McLaren only revealed its plans for a new grand touring model at the Geneva Auto Show in March. Two months later, the car sits before you. That's one secretive, on-time development process that ought to make mid-engined Corvette engineers wince.

But McLaren's made no secret about its expansion plans: It wants to crank out 6,000 cars a year by the mid-2020s, and to get there, it's going to need more accessible models like this: Stylish, fast, comfortable, and capable of 21 miles per gallon on the highway. And it's telling that it's positioning the McLaren GT outside its standard Sports/Super Series/Ultimate Series trident. Chances are this won't be the last car from Woking to wear the GT name.