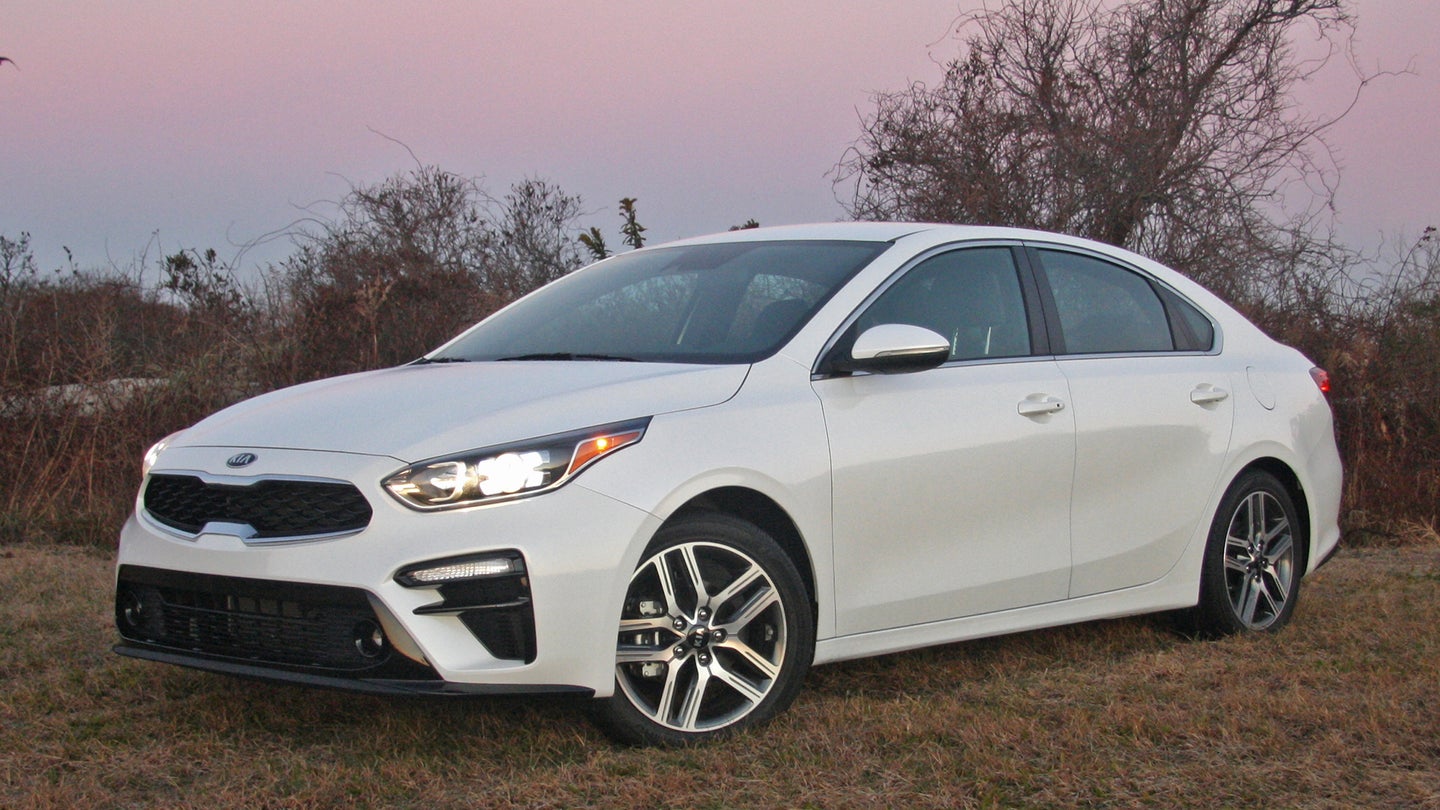 I finally did it: I'm a dad. The funny thing is, I've always owned dad cars, even before I needed to. Owning anything with less than four doors never made much sense, which is how I ended up with a stable of souped-up grandpa cars from the Sixties and Seventies. Now that I'm a father, the '74 Oldsmobile sedan I brought my wife and son home from the hospital in seems a bit dated. And that, my friends, is how I found myself on this quest to find the perfect new dad car. The latest contender: the 2019 Kia Forte.

Despite what you may have heard, the compact sedan isn't dead yet. Want to know how I know? Well, I'll tell you anyway. I drove the all-new Kia Forte for a week, and it confirms what I already knew: small sedans still offer better handling (in many cases) and superior fuel economy (usually), and are almost always cheaper than their bulbous usually-less-attractive crossover cousins.

The Forte is proof that you can drive a small car and not suffer. It's attractive, spacious, reasonably fun to drive and—most importantly for your kid's college fund—relatively inexpensive. You can even get the base model with a manual transmission. The question is, how does it fare against the insatiable demands of new parents?

The first thing any parent thinks of when looking for a new car (other than safety) is interior space. At a time when it's becoming increasingly difficult for parents to own small cars—thanks in large part to the metric ton of baby junk you're expected to schlep around all the time—the Forte offers a pretty decent amount of seating and trunk space. Kia stretched the car by three inches for the redesign, and the result was a roomier back bench—very important for those of us who have to accommodate child safety seats.

At 15.3 cubic feet, the Forte has a bigger trunk than most other cars in its class, even the Honda Civic. A fastback-ish roofline means that the opening isn't very large, but a long, box-shaped cargo bay makes it easy to slide in the many bulky items parents are sure to have with them much of the time. I was able to fit a medium-sized stroller into the trunk lengthwise, leaving room next to it for a folding crib, a diaper bag, and even a small toolbox and a paper bag or two of Harbor Freight purchases. The narrow trunk opening proved to be a bit of a hangup when I stuffed in a few bags of recycling one day, but there was certainly plenty of room inside to take on the cans, bottles, and folded cardboard boxes I needed to dispose of down the street.

The front seats are roomy and comfortable, and the Forte is available with heated and ventilated upholstery in a nearly fully-loaded model that doesn't stray too far north of $20,000. All trim levels come with a crisp, modern-looking 8.0-inch color touchscreen display, which sits above the dash on a tablet-looking protrusion. The rest of the interior is tastefully spare—minimalist, yet dapper. The EX I tested came with attractive red and black faux leather upholstery. All trim levels feature refreshingly moderate aluminum accents on the dash, HVAC vents, steering wheel, shifter, and door handles. In the back row, the LATCH child safety seat anchors are pretty straightforward. My son's rear-facing child safety seat fit just fine in all three rear seat positions. Styling in back is as subdued as the front—again, in an aesthetically pleasing way.

If I sound maniacal about visual manifestations of restraint, it's because I appreciate a vehicle that could, someday soon, give me an opportunity to tell my son, "Less is more. Don't take what you don't need." There's so little restraint in the world today, and we could all use more of it. The Kia Forte is, in its way, a rolling manifestation of self discipline. (Though let's not read too too deeply into it.)

Take the Forte's naturally-aspirated engine, for instance. It isn't a screamer by any means, but if you're willing to bury your right foot when prudent, it'll propel the car where you need it to go with adequate fervor. (Sport mode wakes it up a little bit, but Comfort and Smart modes make it difficult to get the car out of its own way on the highway). Generally, though, it's a bit pokey. The tradeoff is excellent fuel economy: Driving on both the highway and around the city, my observed figures never dropped below 30 miles per gallon. Most of the time, it hovered between 34 and 35 mpg, according to the trip computer.

Lackluster engine aside, the Forte rides and handles very well. Steering response is on the quick side, and the car corners well for something that definitely wasn't designed for track use. The Forte won't dominate the Nürburgring like Kia's fire-breathing Stinger GT, but it slices though annoying traffic coagulations very well. And if you're keen on getting somewhere in a hurry, the Forte does just fine at the upper end of acceptable highway speeds—once you get there.

That brings us to the most important item on any parent's list of new-car wants: safety. The Forte comes standard with a laundry list of active safety technologies, including forward automatic emergency braking, forward collision warning, lane departure warning, lane keeping assist, and driver attention warning. A blind spot warning system with rear cross traffic detection comes standard on the EX model, but is not available on less expensive models. Adaptive cruise control and a pedestrian detection feature for the forward emergency braking system are available, but also only on the EX.

An orange-colored version of the Forte called the Launch Edition tacks on adaptive high beams, LED lighting inside and out, and parking assist, along with some performance-themed vanity accessories that don't do anything to help actual performance. But the option package it comes with jacks up the car's price by more than $3,200, which in turn pushes this reasonably-priced car into a different category.

Neither the Insurance Institute for Highway Safety (IIHS) nor the federal government have released crash safety ratings yet for the new Forte. Based purely upon conjecture—the last-generation 2018 Kia Forte was an IIHS Top Safety Pick+—I'd venture to guess that this year's Forte will fare well in crash testing. Manufacturers these days don't tend to backpedal on safety; if the Forte's IIHS rating takes a ding, it will likely be because the more advanced lighting system is only available on the most expensive model. But again, we won't know for sure until the experts have weighed in.

With its blend of attractive styling, interior comfort, cargo capacity, stellar fuel economy and value, the Forte presents itself as a compelling option for a small family like mine. It doesn't hurt that it's loaded with technology and isn't a chore to drive. It may not accelerate or handle like a sports or luxury car—but it'll do most of what you need it to, and do it very well for $23,000. Besides, you can always pretend that some of the engineers who tested the Stinger at the 'Ring ended up working on the Forte, too. Can you say vroom vroom in German, but with a Korean accent?