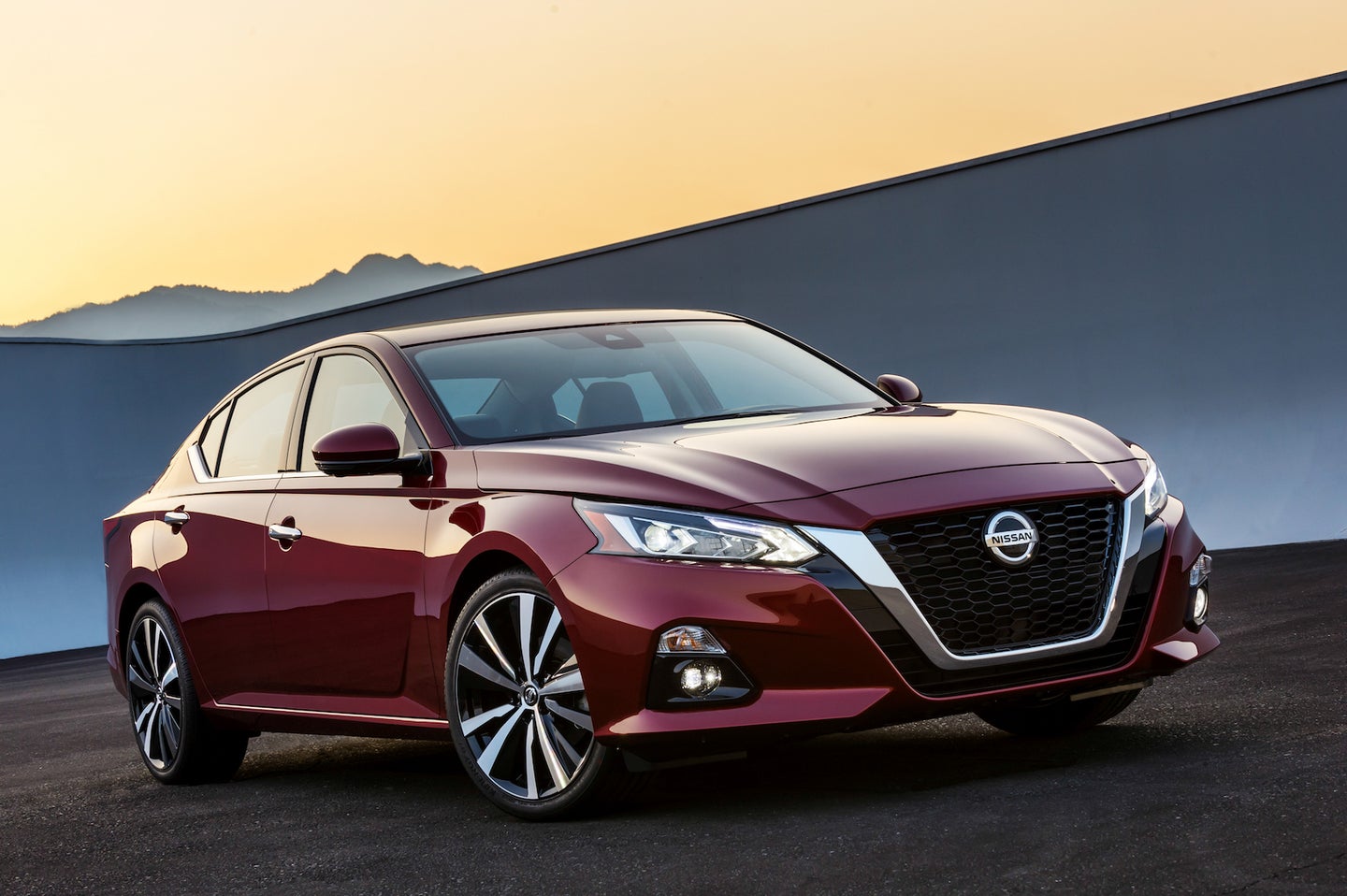 To hear some industry analysts tell it, the American family sedan is going the way of landlines, the Blackberry, or any buddy comedy starring Roseanne and Megyn Kelly. That demise has been exaggerated, of course: Midsize sedans still accounted for 16.2 percent of all new-car sales in 2017, nearly as many as all pickup trucks combined. Family sedans aren't being put to pasture yet, though sales are dwindling and certain members—the aging Ford Fusion and Taurus among them—are set to be culled.

Yet as Americans prepare to celebrate a pair of Thanksgiving traditions, heading to familiar feasts in spacious SUVs, Nissan isn’t quitting the family sedan tradition that’s as American as canned-pumpkin pie and as old as Norman Rockwell. Especially with the Fusion on its last legs, the all-new 2019 Nissan Altima looks to shore up its position as America’s third-most-popular family car, trailing only the Toyota Camry and the Honda Accord.

Yeah, I know how thrilling that all sounds, but bear with me: This Altima brings features worth talking about—including the world’s first variable-compression engine in showroom production, a mildly detuned version of the 2.5-liter, turbocharged VC engine first seen on the Infiniti QX50. Family-car shoppers should also appreciate the Altima’s newly available all-wheel-drive, currently standard only on Subaru’s Legacy and optional only on the Fords. That AWD system can divert up to 50 percent of torque rearward should the front tires lose grip. Especially for folks in the Northeast and other wintry climes, AWD may give the Nissan a real competitive edge against front-drive-only rivals like the Camry, Accord, Hyundai Sonata, Chevrolet Malibu, and Mazda6—especially with AWD adding a reasonable $1,350 to the price, bringing the price to $25,995 for the most-affordable Altima S AWD.

Turning to style, the new Altima looks...all right. If that sounds like a left-handed compliment, in my book it’s two-handed applause: Nissan’s sedan styling language has seemed lost in translation at times, including on the hot mess known as the Maxima. This Altima fares better, including a more felicitous take on the Maxima’s trendy floating roof. The aggressively creased hood sits 1.8 inches lower than before, which required flipping the 2.5-liter engine 180 degrees from its previous orientation. The Nissan is also about an inch lower and longer, with a 1.9-inch longer wheelbase and wheels yanked toward the corners to accentuate the stance.

Inside, the sport-sedan pretense of the previous Altima has been jettisoned for a more solid-citizen layout. Materials and presentations are upgraded, including a standard 8.0-inch, multicolor touch screen that’s wedged, BMW-style, atop the “gliding wing” instrument panel. An intuitive, 7.0-inch digital driver’s display is also standard on all five Altima trims—S, SR, SV, SL, and Platinum—as are automated front collision warning and emergency braking. Some interior plastics occupy mediocre territory, but you could lob that accusation at many sedans in this price range.

Android Auto and Apple CarPlay are standard, along with four USB ports, including easy-to-reach USB-A and USB-C connectors up front. The navigation system on my Altima Platinum featured an excellent level of map detail, though voice controls for nav and other functions were fussy, including a Siri-like helper that wouldn’t stop with the redundant questions or unsolicited tutorials. Nissan’s comfy “zero gravity” seats, ostensibly inspired by NASA, are onboard, now with better bolsters, dual-density foam construction, and optional perforated leather upholstery. Front accommodations are extra-spacious, including nearly 44 inches of legroom. Rear seats are also supportive, but legroom comes up a tad short; the 35.2 inches there is nearly five fewer than the class-best Honda, and three fewer than a Camry or Chevy Malibu. But the trunk is frikkin’ huge at 15.4 cubic feet.

The departing Altima’s 2.5-liter engine was aging as badly as a CBS sitcom—call it Two and a Half Phlegm—with the coarse, stressed sound that you might expect from a Nissan four-banger that started life in 2002. The new 2.5-liter four retains the same block and cylinder head, but Nissan claims about 80 percent of its parts are new. Those parts must be improved, because this engine is appreciably smoother and quieter. Output rises to 188 horsepower and 180 pound-feet of torque, versus a respective 179 and 170 before. For most buyers, the naturally-aspirated four will meet every need and keep the budget in check. But whichever engine they choose, the only transmission choice is Nissan’s continuously variable transmission. More on that in a bit.

When I was young, “VC” meant only one thing. But here, VC refers to the optional engine that can instantly vary its compression ratio between 8:1 and 14:1. How does it work? A variable link joins the pistons' connecting rods to the crankshaft. Controlled via an actuator, the link changes angle to adjust the piston’s position at the top of the compression stroke, and thus the cylinders’ volume. That allows on-the-fly changes in compression ratio: higher for maximum efficiency with no knock, and lower for more power and torque. Drivers can dial up a digital gauge that shows the adjustments, along with turbo boost levels.

With its broad, low-onset torque curve, the engine feels more muscular than the numbers suggest: 248 horsepower and a peak 280 pound-feet when running premium unleaded, versus a respective 270 and 251 for the departing 3.5-liter V6 that also plopped an extra 40 pounds over the front axle. I didn’t clock an acceleration time, but my seat-of-pants calculation tells me the VC-powered Altima should reach 60 mph in about six seconds flat—on par with the zippy turbocharged Accord, and plenty fast for family transport.

One disappointment is that you can’t combine both of the Altima’s technical calling cards: The more-powerful VC models are front-drive only, due to packaging constraints. One consolation is solid fuel economy of 25/34 miles per gallon in city and highway, respectively, and a 29-mpg combined rating that’s one mile-per-gallon better than the turbo Accord’s 28. Compared with the old V6, which struggled to reach 30 mpg on real-world highways, the pair of Altima Platinums I drove showed me 34 or even 35 mpg on mellow highway runs—solid-as-hell mileage for such a powerful sedan. Naturally-aspirated, 2.5-liter Altimas do even better at an EPA-rated 28/39 mpg, or 26/36 mpg with AWD.

Still, it’s fair to ask why this technical-powerhouse motor, in tandem with a CVT, can’t decisively beat the mileage of rivals with conventional turbo engines and transmissions. (Perhaps Nissan will squeeze out more-significant gains as it continues to develop these powerplants.) That CVT, as ever, takes getting used to, but the acclimation period is blessedly short. Nissan has steadily improved its CVTs to avoid the engine-droning, non-linear surges and rubber-band feel of old. Bury the throttle, and the Nissan even does a decent job of mimicking the stepped gears of a conventional automatic. Steering-wheel paddle shifters, available only on the mildly sportier SR model, may turn that trick even better.

As for ride-and-handling, the Nissan aims for the soft, dad-bod middle of the sedan spectrum, finding plenty of company in cars like the Camry, Sonata, Fusion, and Malibu. (The Accord and Mazda6 remain the sporty “driver’s cars” of this segment.) Still, the Nissan proved pleasant company. Steering is accurate, with eager turn-in, but way shy on road feedback. I definitely sensed more tire noise than other sedan benchmarks, including the Honda. Major mid-corner bumps or sudden corrections can upset the compliant suspension, yet the chassis is quite spry; and in tandem with the optional 19-inch wheels, the Altima hustled down wooded backroads in New York at surprising speeds.

And it's only there, during Type-A driving, that the CVT earns a big demerit. There's a disconnect between rapid throttle application and the onset of useful power, along with a reluctance to drop revs naturally when you get off the gas. In a romp through Harriman State Park, my driving hack was to left-foot brake the Altima into corners, and to jump back on throttle extra-early to keep the engine and transmission on boil.

My biggest letdown was the sometimes-clunky performance of the Altima’s ProPilot Assist—standard on uplevel models—which worked like a charm when I first sampled it on the Leaf EV. That active safety suite combines adaptive cruise control, automated collision braking, and lane-keeping, along with mild active steering assistance that requires a driver's hands on the wheel. On Manhattan’s West Side Highway, ProPilot struggled to keep a smooth pace in stop-and-go traffic, applying its brakes in such herky-jerky fashion that I was compelled to shut the system down. More than once, the Nissan gunned itself forward when a gap opened up, but failed to anticipate the next slowdown, forcing me to retake control and brake to avoid what felt like an impending rear-ender. Perhaps the Nissan would have stopped in time, but I wasn’t about to take chances.

And the Altima’s new rear automatic braking might be great for backing down a blind driveway, but it didn’t seem designed with New Yorkers in mind, or anyone who does a lot of parallel parking: Even set to its least-sensitive mode, the Altima kept applying its own brakes whenever I tried to back up near a parked car. No matter how cautiously I inched back, the system would whang the brakes in upsetting fashion and flash its red animated warning on the rear camera view before it would let me proceed.

Mix-ups aside, this all-new Altima definitely puts itself in the competitive mix for sedan shoppers. Prices begin at $24,675 for the Altima S, and top out at $36,645 for the limited-run Platinum Edition One, or $33,025 for the regular Altima Platinum. It’s hard to imagine a world in which buying a family sedan sets you apart from your neighbors. But choose an Altima over any sport-ute, including the Nissan Rogue—now America’s best-selling SUV—and you might consider yourself a revolutionary.

Nissan Hints Its Future Sports Cars Could Be Electrified

Whether they’ll be mild hybrids or fully electric vehicles is uncertain, but odds are good that the next Z and GT-R will be juiced up by electricity.