2018 Dodge Charger Daytona 392 Review: The Past, Perfected for Perpetuity

A roaring, naturally-aspirated 6.4-liter V8 engine makes this American sedan the last of its kind. 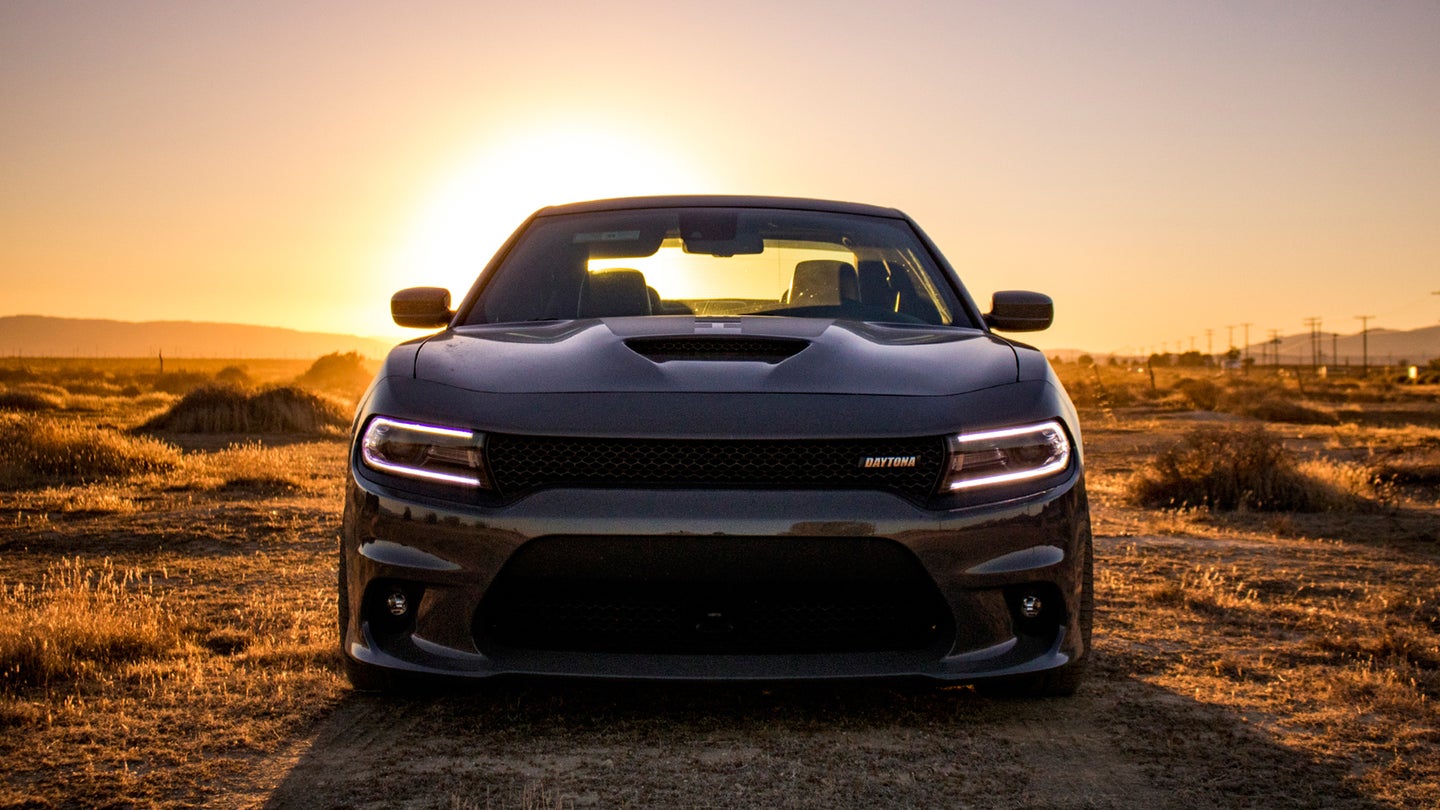 Welcome to Critic's Notebook, a quick and off-the-cuff car review consisting of impressions, jottings, and marginalia regarding whatever The Drive writers happen to be driving. Today's edition: the 2018 Dodge Charger Daytona 392.

Rising out of the dusty slopes of the Tehachapi Pass, California's Alta Wind Energy Center is one of the largest wind farms in the world. It's a sprawling vision cast over 3,200 acres of scrubby desert and low hills; running at max capacity, its 600 massive turbines can produce enough electricity to power well over 200,000 homes. It is the future of energy—and, arguably, the definition of human progress.

I found myself in its shadow with a 2018 Dodge Charger Daytona 392 after a day at Willow Springs Raceway, the iconic track which happens to be a few miles south of there. Bumping along the granular pavement and enjoying the sound of a 6.4-liter V8, I almost didn't notice the forest of gleaming white spires sprouting around me. And when I finally pulled up to one in my CO2-spewing ride to take some pictures, I felt more than a little like an ape before the monolith in 2001: A Space Odyssey.

Really, short of a Hellcat, I don't think I could've brought a more anachronistic vehicle with which to catch a glimpse of the future. There are so many things about it that aren't in keeping with the times. Its platform is old enough to drive itself in certain agricultural states, its array of V8 engine options are a giant middle finger to the Environmental Protection Agency, and its three-box shape is tougher than ever to sell these days. But that's why the Charger Daytona 392 is a thing of beauty. There's something about its louche approach to aging that dovetails with the nostalgic power chord it was built to strike.

By now, the Charger hardly needs an introduction. Not a whole lot has changed in the eight years since the second generation of Dodge's full-size sedan launched, apart from the occasional supercharged V8 or different trim levels—like the company re-introducing the legendary Charger Daytona name as an homage to the famous 1969 aero-bodied car. The present Charger Daytona, for better or worse,  is nothing like that homologation special; instead, it's a rollicking four-door Carnaval that doesn't care if the 21st Century has little use for sedans or V8s anymore. It's loud and brash, putting your senses in a headlock and challenging you not to like it—but most of all, it shows they do indeed still make them like they used to.

There are two ways to look at the value of the Dodge Charger Daytona 392. One is that it's a kind of a waste of money—there are a lot of cool things in the low-$40,000 range. It's kind of a sweet spot where you have some excellent upper-tier trims of cheaper cars like the Ford Mustang, Chevrolet Camaro, or even a different kind of statement piece, like a Jeep Wrangler. That price point also collides with the lower rungs of premium brands like Audi and BMW, though that's a little apple-to-oranges. Point being, it's easy to argue you'd have to be a Mopar diehard to spring for one of these.

On the other hand, value itself is subjective. You can't buy any other four-door car with a 6.4-liter V8 at that price point. You can't buy any other vehicle that carries itself with the same confident lack of seriousness at that price point. And you can't find much else on four wheels period that celebrates the tradition of 20th Century American motoring like this car, warts and all. It's a surprisingly special ride in a workaday guise—and to me, that's the real value here.

The future might be wind power, or hydrogen, or maybe even cold fusion—but whatever it will be, chances are the Dodge Charger Daytona 392 isn't it. It remains to be seen what the next generation of the Charger/Challenger pair will look like—though rumor has it Fiat-Chrysler plans on another round of nips and tucks to the current platform, which would mean at least some similarities to the fire-breathing models we now enjoy. 50 years from now, that probably won't be the case. Those Chargers will be whooshing and whirring and beeping, and only the old-timers will remember the days when cars sounded like thunder.

Which is why the old Dodge Charger, the butt of many enthusiast jokes about dated platforms and doomed designs, deserves far more respect in its sunset years than it's currently receiving. It's not the fastest or the freshest, but it's a living link to the past...one that still happens to be a hell of a lot of fun in the present.