The driver says he accidentally left it in neutral but, really, that’s a hard mistake to make with these. 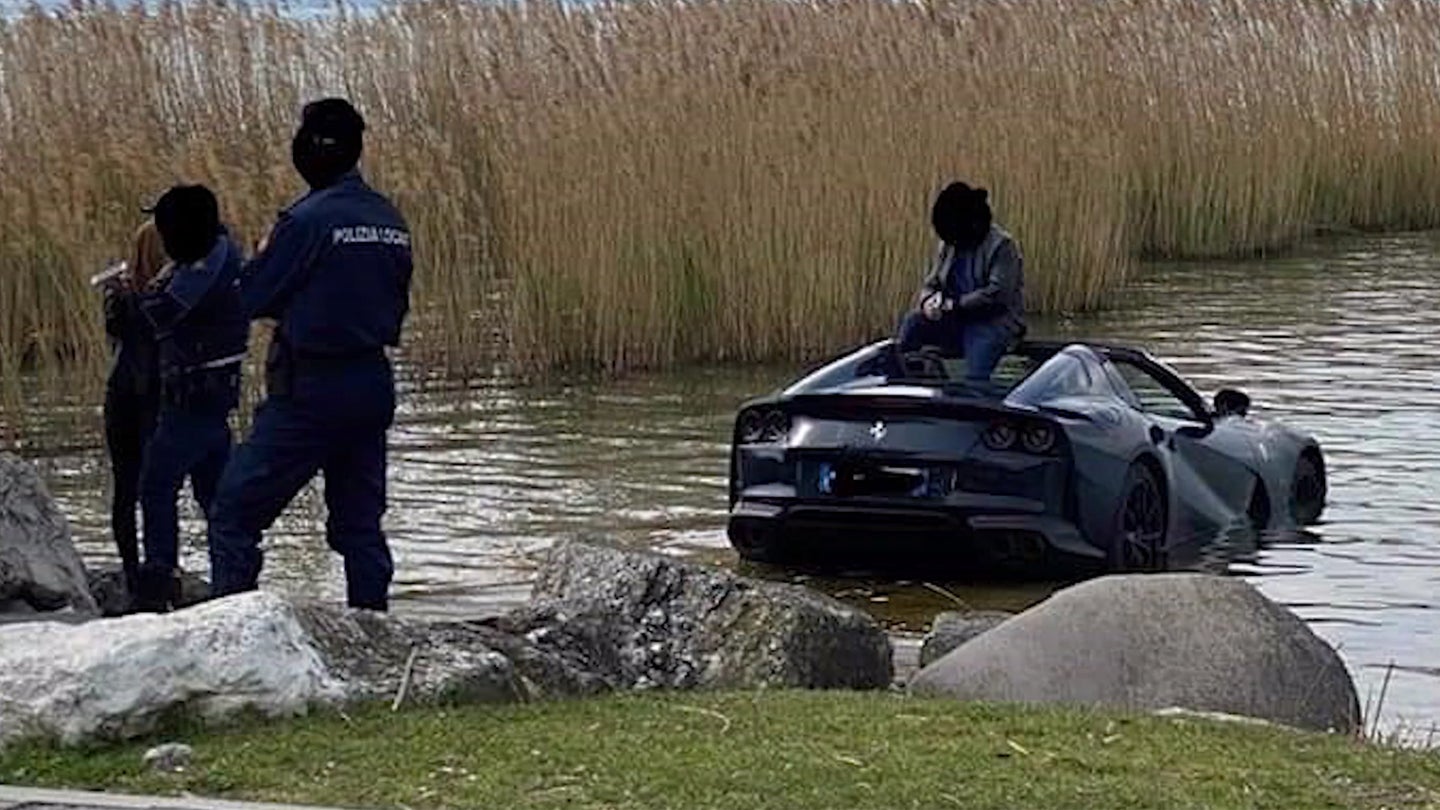 It's almost like there are magnets at the bottom of lakes across the world that love to pull in supercars. First, they took that Bugatti Veyron in 2009, and now they've fired back by claiming a Ferrari 812 GTS in northern Italy.

As originally reported by Italian motoring publication Formula Passion, the 812 GTS was seemingly left in neutral on a slight incline without the handbrake applied. In turn, the $400,000 supercar took a nice, refreshing dip in Lake Garda.

Various reports say the car was parked along Via Achille Grandi, a roadway in Sirmione which ends with a slipway meant for loading and unloading boats. By the time the owner had realized his car was in motion, it was too late to prevent it from barreling into the lake.

While the car was never fully submerged, it still managed to make its way far enough into the water that they had to call a tow truck. That was probably a smart move rather than risk hydro locking the 789-horsepower V12.

Now, I know what you're thinking: neutral isn't exactly easy to engage in a modern dual-clutch Ferrari. And, yeah, you're right. There's an entire procedure in the 812 GTS owner's manual dedicated to the transmission's various forms of "neutral."

With the vehicle running, owners must pull back on both gear selectors to disengage the unit's internal gears. But it doesn't stop there, because the 812 is also equipped with a feature called "Park Lock." You can probably guess that this is to keep the vehicle from moving while the car is turned off. Park Lock is automatically engaged when the engine is switched off when in gear, or after a set amount of time if in neutral.

In order to keep the car in neutral while the vehicle is off, drivers must perform what the manual calls "Carwash procedure." This means engaging neutral via the paddles, switching off the car, and finally turning on accessory mode within three seconds of switching off the engine. The Ferrari then displays "Carwash mode activation" to inform the driver that the transmission is in neutral and requires them to engage the parking brake to keep it stationary.

Whether or not the car will go to salvage auction is unknown, though it's hard to believe that a supercar going for a swim like this won't end as a total loss. It's still hard to stomach that a Ferrari V12 convertible suffered this unfortunate fate, but at least it wasn't salt water.

There are few better sounds than a free-breathing V12, but the 812 is more than a one-trick pony.