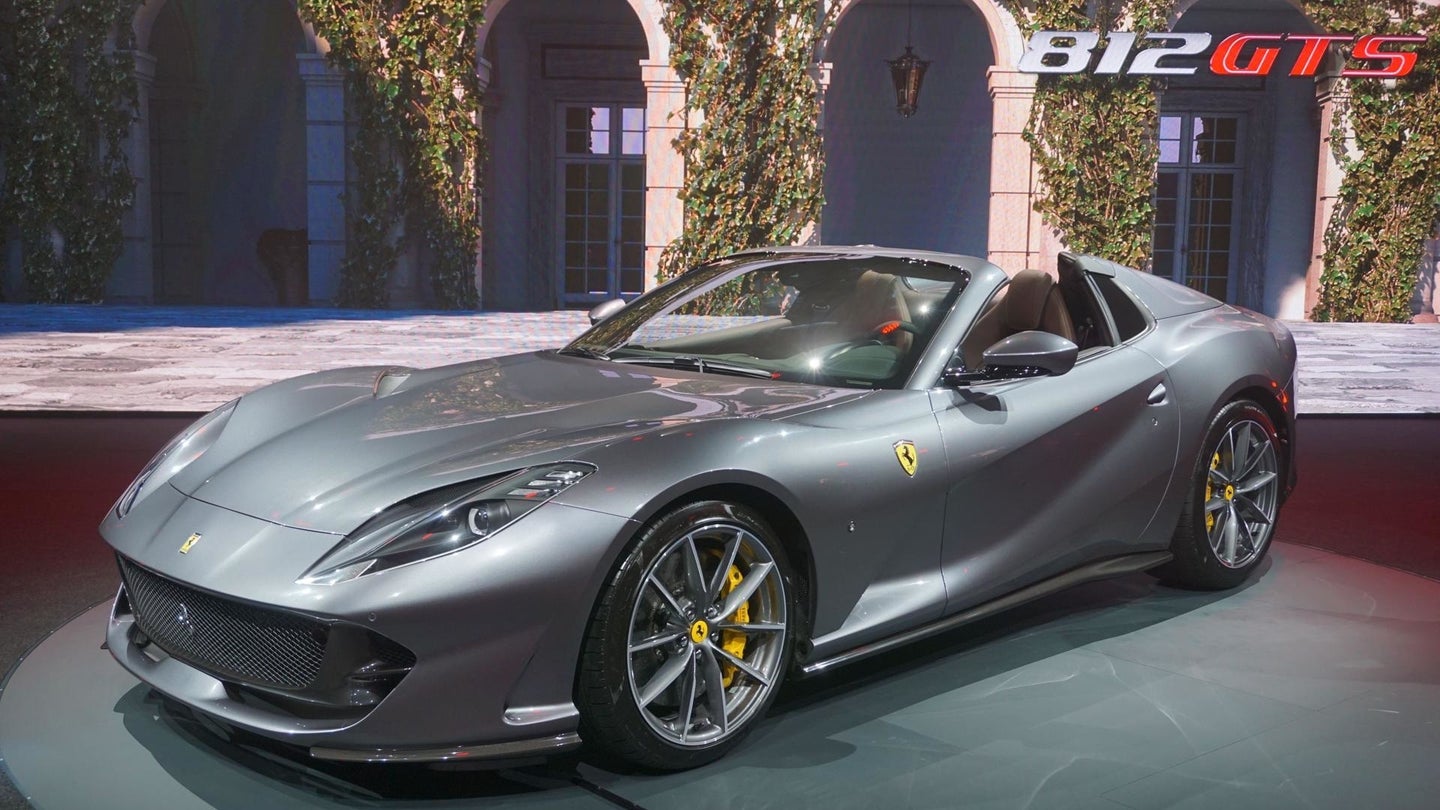 Fewer supercars are being built with audiophiles in mind. Hybridization and forced induction have become the standard to the point where even just a slightly revised debut is cause for celebration. Ferrari, though, hopes to be one of the last bastions for the naturally aspirated engine. As such, put your enthusiast hands together for the goosebump-inducing, and the very topless, 2020 Ferrari 812 GTS.

Eagle-eyed fans will see the Ferrari 812 GTS for what it really is, a convertible version of the company’s hellacious 812 SuperFast grand tourer. Thankfully, Ferrari knew to leave well-enough alone and kept much of what makes the 812 Superfast so addictive, including its naturally aspirated 6.5-liter V12 engine which produces a staggering 789 horsepower and 530 pound-feet of torque.

According to Ferrari, put your foot down and the super grand tourer will scream until it hits its 8,900 rpm redline. That redline, however, is pure theater as max horsepower is achieved at 400 rpm lower than redline. That uniquely Italian theater continues with the Ferrari’s performance attributes with zero to 62 handled in three seconds, 124 miles per hour in 8.3, and go on to plow through your eardrums for a top speed of 211 mph.

As the Ferrari 812 GTS is still very much a grand touring machine, Maranello fitted the supercar with a set of re-tuned magnetorheological dampers to increase comfort when just cruising.  When the road—or track—gets racy, the 812 GTS is capable of stiffening up to provide drivers with Ferrari’s race-bred handling.

The addition of the retractable roof—which opens and closes in just 14 seconds at speeds of up to 28 mph—even though it’s technically cutting a portion of the car out, increased the Ferrari’s curb weight by 75 kilos or just about 165 pounds. That weight gain was thanks to the convertible’s electronic mechanisms and the chassis strengthening Ferrari needed to do to ensure torsional rigidity was maintained.

Like its hardtop brethren, the 812 GTS uses Ferrari’s latest and greatest Electric Power Steering, as well as Ferrari’s SSC dynamics controls, and its Virtual Short Wheelbase 2.0 system, which in more laymen terms is rear-steer, similar to Lamborghini and Porsche’s systems. The systems working in conjunction also allow for Ferrari to tune the car for easily controlled oversteer, which in our minds is far better than lap-times.

Ferrari made special note to ensure that the 812 GTS maintained the company’s long-standing GT history in terms of design as well. Maranello says that the supercar “echoes the formal language and proportions of Ferrari’s front-engined V12 without altering either its exterior dimensions or interior space and comfort, so it represents the perfect marriage of sportiness and elegance.” The company also says that the high-set tail is meant to be “reminiscent of the glorious 365 GTB4 Daytona of 1968.”

Though 812 GTS buyers likely aren’t hurting for cash, Ferrari will offer the supercar with a 7-Year maintenance plan that covers “all regular maintenance” for the first seven years of ownership. Those that buy the 812 GTS second-hand in a few years will also have the option to purchase the plan then as well.

Price and availability, however, are something that Ferrari is keeping close to the vest for the moment. The hardtop 812 SuperFast retails for $363,730. Given that convertibles normally command a pretty premium over closed roofs, we expect the 812 GTS to fall between $370,000 to $390,000. As for availability, Ferrari made special mention that the 812 GTS is a production model, likening it to the 365 GTS4 Daytona Spider, so we expect it to be made in similar numbers as the 812 SuperFast. That doesn’t mean you or I will see herds of 812 GTS’s stampeding down Rodeo Drive, but they will be far less rare than say the LaFerrari Aperta.

All we know is that we’re extremely happy Ferrari is maintaining the tradition. Long live the naturally aspirated V12.