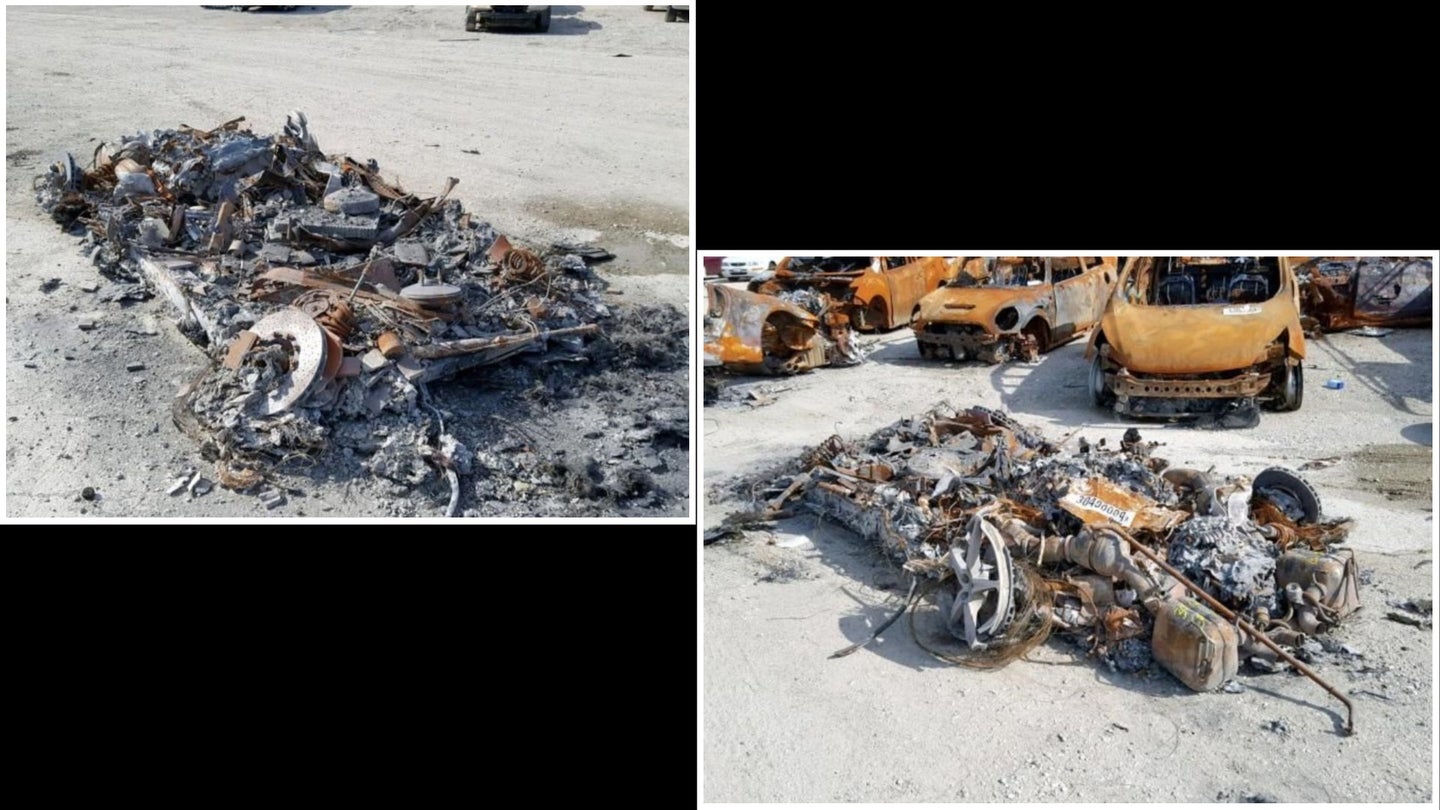 We’d love to tell you this 2014 Ferrari 458 Spider lead a boisterous life. How it raced at Le Mans, cruised Monaco, wept at its first drive of Monza, and went to visit Michael Schumacher. We’d love to say that after a long life, it died a glorious death and received a Viking funeral, leading to its current state of a dustbin’s worth of ash. Maybe it did? It probably didn’t.

With barely enough material to fit in a medium-sized urn, this particular Ferrari is being sold on the salvage auction site, Copart. And as you can see, little is left to distinguish what came from Modena and the concrete pavement underneath it.

When new, a Ferrari 458 Spider came with a naturally aspirated 4.5-liter V8, transaxle dual-clutch transmission, and rear-wheel drive. It cost owners $270,000 when new and pristine, something it most definitely isn’t anymore. At the time, the 458 Italia and 458 Spider were declared as two of the greatest supercars ever built. The 458 was also a truly stunning design, something that Ferrari has moved away from since.

Few details are offered as to how the Ferrari came to be little more than a pile of ash, melted aluminum, shards of steel, two errant carbon-ceramic brake discs, and part of the 4.5-liter V8’s block. What Copart does share is that the auction doesn’t include the car’s keys and that the primary damage was “BURN.” We couldn’t have guessed.

One particularly interesting detail of Copart’s listing is that this ash pile has an estimated retail value of $275,000, which for those playing at home, is $5,000 more than when it was new and, you know, driveable. We’ve pointed out before that when a car of this provenance, and in this state, comes up for auction, the buyer is purchasing little more than the VIN either for a future project or just to have it.

Ferrari’s have always been designed to be fiery supercars. Italian thoroughbreds looking to gnaw ferociously on your heartstrings and the world’s speed limits. Yet, Modena’s supercars aren’t supposed to be as fiery as what’s left of this Ferrari 458 Spider.

We’re constantly daydreaming of owning a Ferrari. The presence, power, speed, and exclusivity all add up to one of the greatest automotive manufacturers ever. However, given our paltry pockets, we’re likely never to be fortunate. Depending on how this auction goes, though, maybe we could join those rarified ranks? We couldn’t put the 458 Spider back together—no amount of superglue, carbon-fiber, spit, and gumption could—but it could be an interesting art installation.

Maybe we could be the next Banksy?