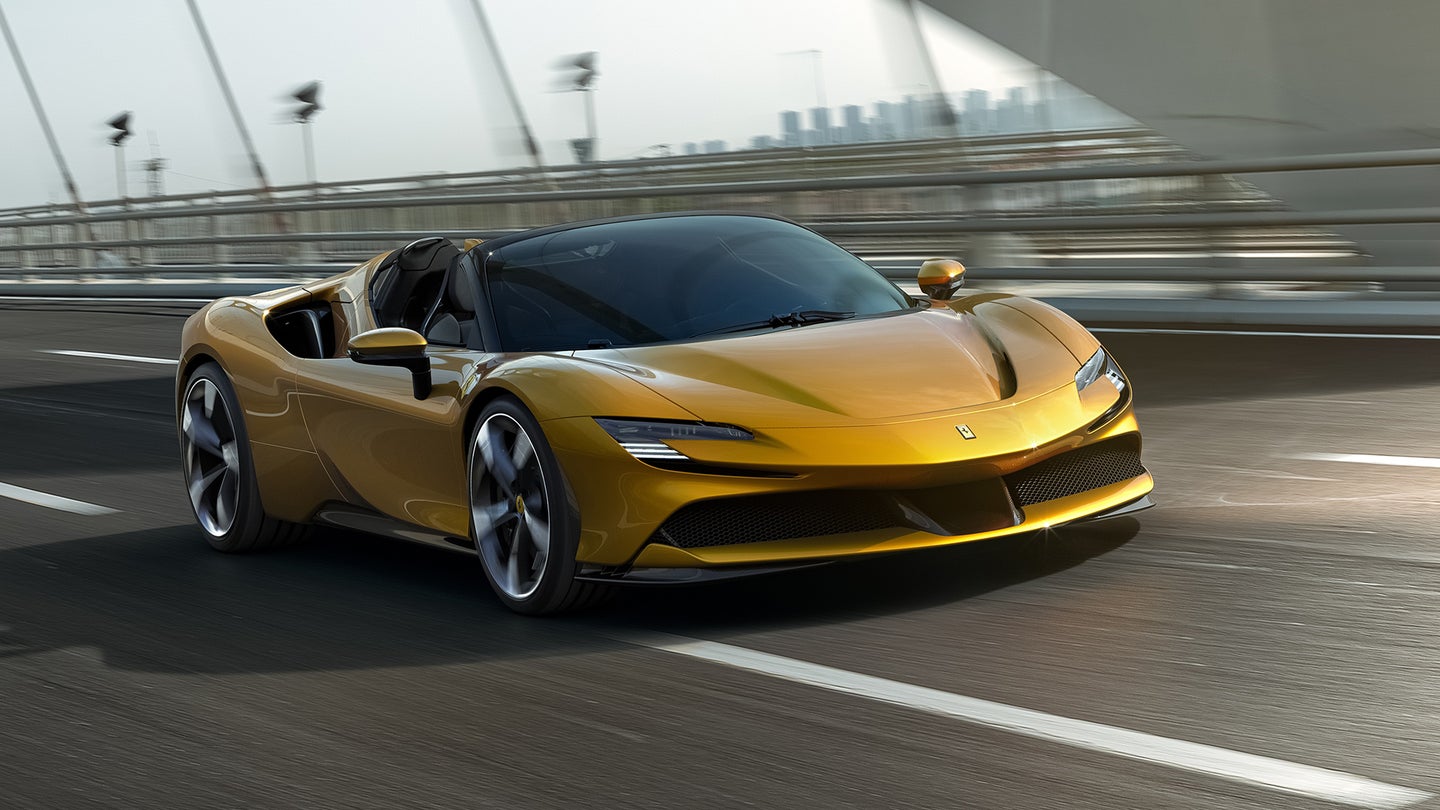 Unlike during the Testarossa era of supercars that were red more often than not, the Spider version following the berlinetta nowadays is only a matter of time. But in the case of the SF90, Maranello's most powerful road car to date, we only had to wait 18 months. Say hello to the SF90 Spider, which features a retractable hardtop that can be actioned in just 14 seconds and can of course be deployed when the car is on the move. Ferrari says its RHT mechanism also takes up just 3.53 cubic feet of cargo space, rather than the 5.3-7 cubic feet required by "a traditional system."

At 3,681 pounds dry, the Spider is about 167 pounds heavier than the Stradale, yet you shave off some 46 pounds of that if you opt for Ferrari's Assetto Fiorano pack. This includes Multimatic shock absorbers optimized for track use, as well as carbon fiber and titanium components like a carbon rear spoiler. Ferrari also throws in road-legal Michelin Pilot Sport Cup 2 tires and an optional two-tone livery.

Other than that, the recipe is the same. A combined output of 986 horsepower and 590 pound-feet of torque, with the twin-turbo internal combustion engine producing 769 horses at 7,500 rpm, and the howlin' redlining at 8,000.

Thanks to the traction generated by its all-wheel-drive system, the car can achieve a zero-to-62 time of 2.5 seconds, reach 124 mph in seven seconds flat, and tick a top speed of 211 mph. That's the same as the hardtop. If you must know, Ferrari claims the Spider will also lap Fiorano in 79.5 seconds, which is just a hair quicker than what a LaFerrari is capable of.

With an electronic front axle providing 15 miles of EV range, the SF90 Spider's 45-55 front/rear weight distribution is aided by the latest traction control and torque vectoring software, as well as the brake-by-wire control with ABS/EBD that splits braking torque between the hydraulic system and the electric motors, allowing regenerative recovery under braking. Ferrari's plug-in hybrid system weighs 595 pounds.

Boasting 30 percent higher torsional rigidity than previous foldable hardtop Ferraris, the SF90 Spider's body equipped with the Assetto Fiorano also generates up to 860 pounds of downforce through corners. The design includes a cut-off Gurney at the rear controlling airflow over the rear axle, the front underbody with vortex generator strakes, plus forged wheels featuring a blown geometry. Without creating drag, Ferrari also added transverse louvers to the rear screen to help extract all the heat.

Switch that tail to either low drag or high downforce modes, and you still get a retractable power rear window. What more could you ask for? If the answer is an extended all-inclusive seven-year maintenance program with your highly electrified Italian supercar, Ferrari will be happy to hear from you.