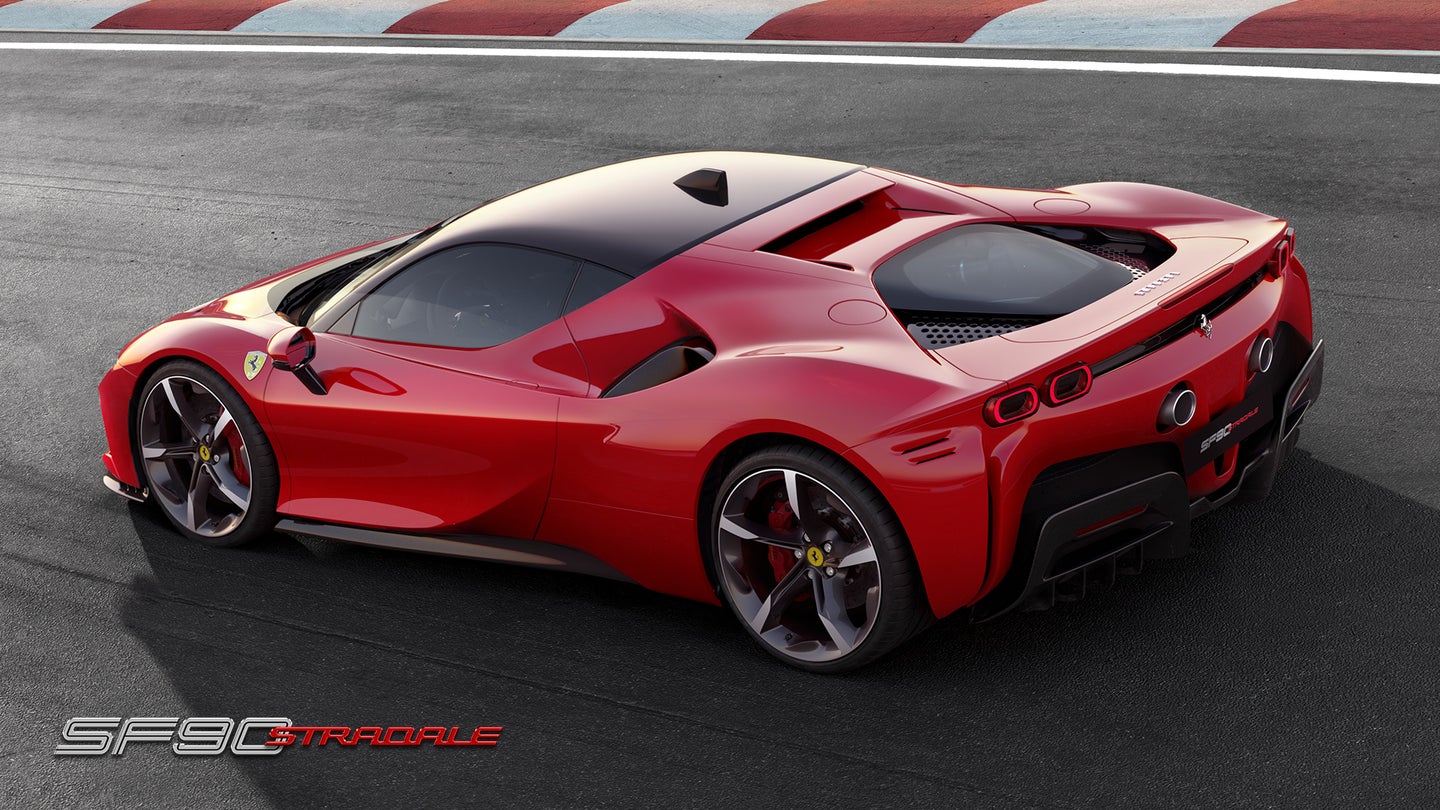 What's New: We'll cut to the chase—you're looking at the most powerful production Ferrari ever made. And to our fake surprise, it doesn't involve a V12.

Mounted in the middle instead is a 769-hp, 4.0-liter, turbocharged V8—the most powerful eight-cylinder in Ferrari history—hooked up to an eight-speed dual-clutch gearbox. Picking up the slack are three electric motors—one in the back and one dedicated to each front wheel. The result? A combined output of 986 hp, 0 to 62 mph in 2.5 seconds, and a top speed of 211 mph.

Ferrari says the hybrid system takes up 595 pounds of the Stradale's 3,561-pound curb weight but the thrust it provides is well worth the weight gain.

The lucky few who will ever find themselves climbing into the Stradale's futuristic bodywork and behind its touchpad-equipped steering wheel will be greeted by an entirely digital instrument cluster courtesy of a 16-inch curved HD screen. It's apparently the first of its kind to be found in a car, beating BMW to the curved-gauges punch.

It isn't all Prius-power, iPad gauges, and Ridge Racer styling, though. As a nice nod to Ferraris of the past, the SF90's automatic gear selector resembles the H-shaped gate of a manual shifter.

What You Need to Know: Despite being more powerful than the LaFerrari, the SF90 Stradale is not a direct successor. It actually slots in between the F8 Tributo and where a LaFerrari sequel would sit, meaning an even more extreme Ferrari could be coming sooner rather than later.

The Stradale can be driven in four drivetrain modes: eDrive, Hybrid, Performance, and Qualify. In the electric-only eDrive mode, the SF90's V8 and rear electric motor shuts off, essentially rendering the car a front-wheel-drive EV. It has an electric-only range of 15.5 miles. Hybrid mode, meanwhile, is what the car starts up in and defaults to. Like its name suggests, all three electric motors and the fuel-powered engine work in tandem, maintaining a high level of both efficiency and performance.

Stick the Stradale in Performance and the V8 is always-on, eschewing efficiency for more go-fast happy fun-times. The cheekily named Qualify mode, meanwhile, throws any and all pretenses of fuel economy out the window and puts all of the car's motors—electric or otherwise—in maximum attack position.

Those actually looking to purchase an SF90 Stradale can get the car as "standard" or in something Ferrari calls Assetto Fiorano spec. The equipment package, which I'm gonna go ahead and call Stradale AF, comes with Multimatic suspension, 66 pounds less weight thanks to various carbon fiber and titanium parts including a carbon rear spoiler, and Michelin Pilot Sport Cup 2 tires.