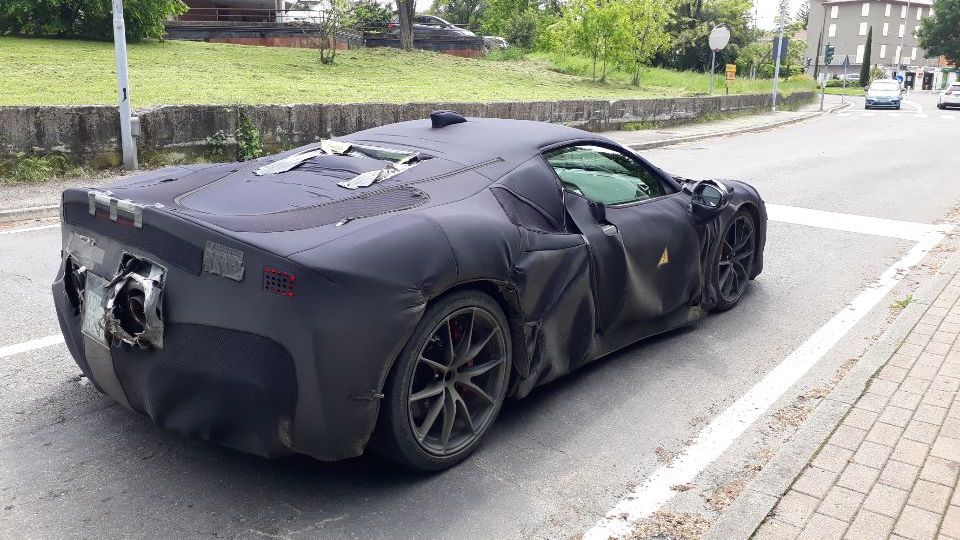 If rumors are to be believed, Ferrari is poised to reveal another hybrid supercar sometime around the end of this month, and a prototype for said car has been spotted zooming around somewhere in Europe. Most recently, it was caught on video trying to escape two nosey guys in a Ferrari 488.

In the video and other photos that have been shared of the car, emblems warning onlookers of high voltage can be found on the doors, meaning that this Ferrari test mule is a hybrid. This car slots perfectly into the outline of the model coming out later this month, a hybrid V8 supercar, as described by multiple Ferrari executives in interviews throughout the year.

This model will be the second of five new Ferrari models planned for reveal in 2019, and the second of two sports cars, the first being the F8 Tributo, Maranello's competitor to the McLaren 720S. Ferrari hosted an investor relations conference call earlier this month that confirmed the model will debut at the end of this month, specifically May 31.

Ferrari CEO Louis Camilleri has stated that this model will sit above the 789-horsepower 812 Superfast grand tourer in Ferrari's lineup, meaning that this won't be some limited-run special edition, and more powerful than the 812. Based on descriptions of its powertrain, which allege that its hybrid system will be an evolution from that seen in 2013's LaFerrari, power output for this model will likely come in at a minimum of 870 horsepower, with some speculating that it'll be closer to the 1,000 mark. A user of Ferrari owners' forum Ferrari Chat alleges that this power will give the model a zero to 60 time of two seconds flat.

Members of the aforementioned forum speculate based on the handful of styling details visible through the car's camouflage that this Ferrari will be styled after the historic 330 P3/4, which raced at Le Mans in the 1960s. They allude to a possible name, "BB," which in Ferrarish is an acronym for "Berlinetta Boxer," a model produced between 1973 and 1984. Ferrari has yet to officially allude to the model's name, though it recently commemorated its historic V8 sports car lineup on social media as part of a buildup to this hybrid's reveal.