Glorious sounds and about 500 horsepower out of a convertible vintage car? Sign us up. 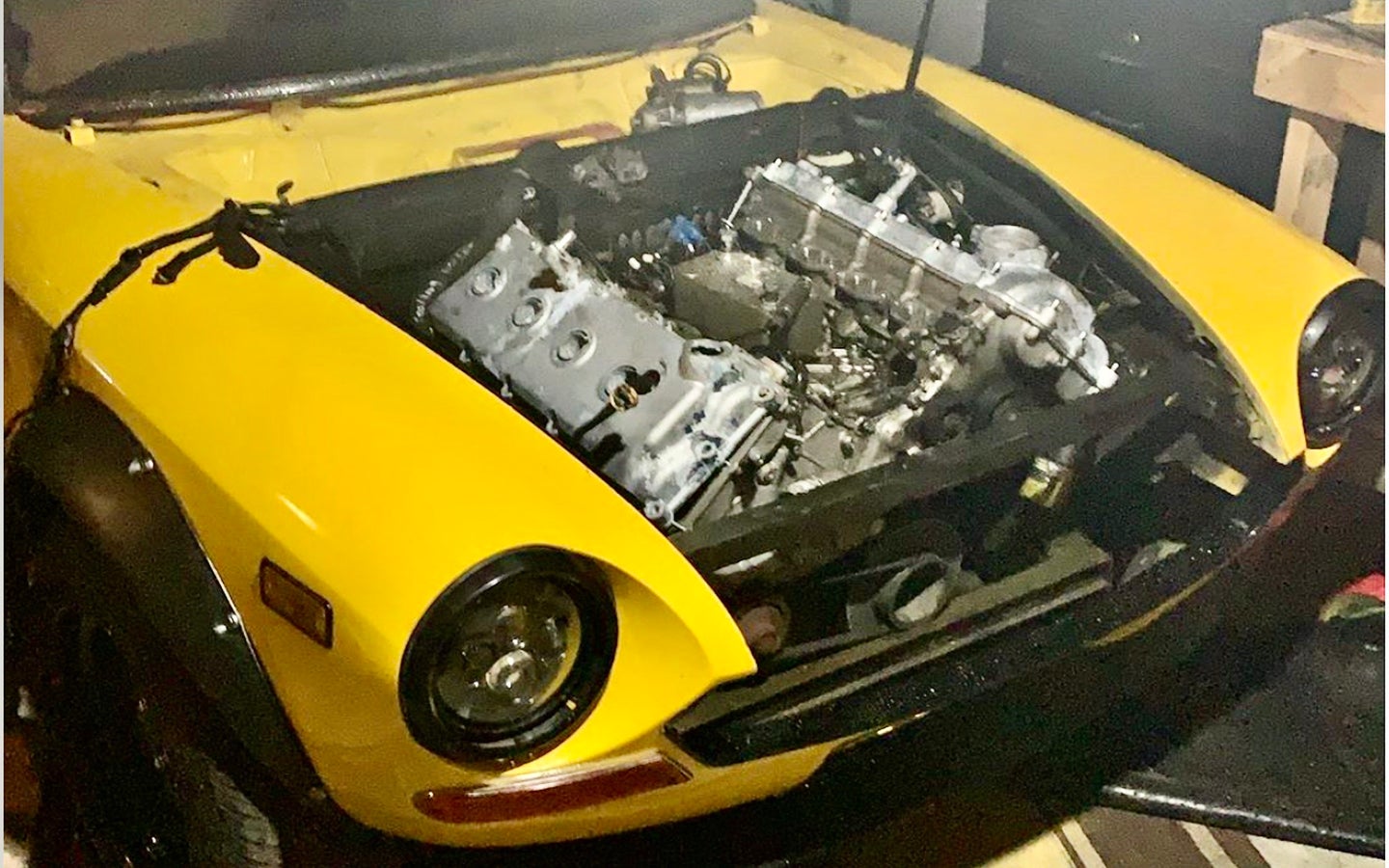 Long before the Fiat 124 Spider was a prettier but worse Mazda MX-5, it was a brilliant little roadster. It handles well and it's full of vintage charm. It doesn't weigh much, so why not stuff a Ferrari V8 in the front?

Johnny Fargas-Diaz has a lovely 124 Sport Spider and a big ol' Ferrari-Maserati F136 engine. This particular 90-degree V8 was used in Ferraris, Maseratis and Alfa Romeos starting in 2001, dropping into everything from the Maserati Quattroporte to the Alfa Romeo 8C and the Ferrari 458. The F136 U going into this car was made for the Quattroporte.

Yes, they considered the oh-so-common LS swap. The $4,000 Ferrari engine won out on cool factor, sound and power in the end—as it should.

This Fiat-rarri—named "Tarantulo" after the bigger, beefier arachnid—is a family project, which is extra rad. The family who swaps Ferrari V8s together stays together, right? I think that's how it goes.

In stock guise, the Ferrari-Maserati F136 made anywhere between 385 and 597 horsepower, and according to his intro video, Fargas-Diaz is targeting roughly 500 hp for his 124 Sport Spider's engine. Maybe that sounds like he's holding back from the maximum of this engine's potential, but it's a huge improvement given that regular 124 Sport Spiders hovered around the 82 to 116 hp mark, depending on model year.

Somewhere along the line, this Fiat got a different 2.3-liter turbo engine from 1986, but that engine had been in there nearly 20 years and was tired. Clearly, it was time for a big change.

As far as the F136 goes, having to "make it fit in the Fiat" is a bit of an understatement—there's some cutting and fabricating involved here, including beefing up the chassis and other parts to cope with that 500-ish horsepower. Plus, they have to source the top of the engine separately. The radiator fits in the trunk. A T-56 six-speed manual transmission will eventually go in to handle the extra power, and the center console will be moved back to accommodate the new engine and transmission combo.

It's switching to throttle-by-wire, which makes sense given that there's a much more modern engine taking up way more space in the engine bay. As far as engine management goes, Fargas-Diaz says that the car runs using an Arduino now, but will eventually use a MicroSquirt 3.

There's a few visual mods on the outside—newer headlights and taillights, some fender flares and a wider stance, a custom badge and vents in the trunk—but unless the engine has to stick out of the existing hood (which is a possibility), this tarantula-inspired car should crawl under the radar.

It will have a very classic-looking feature under the hood, however: individual throttle bodies! Fargas-Diaz didn't want a plain ol' regular intake on the car, so they're adapting an intake from a BMW M3 V8 to use with carbon composite velocity stacks.

You can follow along with the build's progress here on Fargas-Diaz's YouTube channel, here on Instagram or through his posts in the Build Threads Communal Garage Facebook group here. This is definitely a project I can't wait to see in action.