What Is a Boxer Engine?

Don’t worry, it’s not here to start a fight. 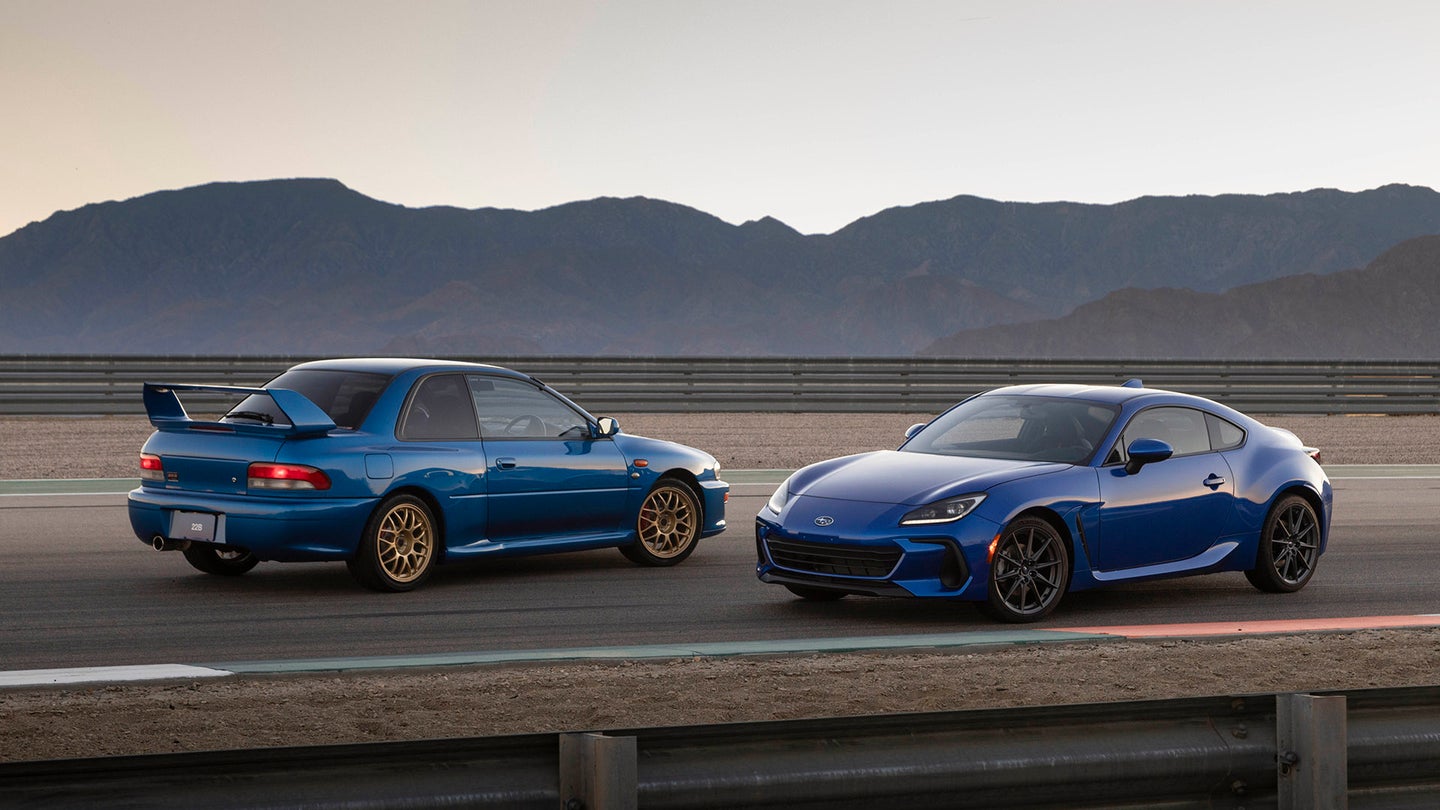 Although the basic principles of an internal combustion engine are universal, the manner in which these engines are designed and function vary greatly. Some engine configurations are designed in a line, others in a V, while others are flat, like the boxer engine.

The boxer engine is most well-known today in its Subaru and Porsche applications, but it was a different German manufacturer that pioneered its use in automobiles at the end of the 1800s. Its advantages were seen then, and they are still highly regarded today, though not enough to see widespread usage.

To better understand boxer engines and how they work, The Drive’s burble-loving informational team has assembled a quick reference guide with terms, definitions, history lessons, and photographs. And yes, there’s a video too. Let’s start today’s lesson.

What Is a Boxer Engine?

A boxer engine, the most common type of flat engine or horizontally opposed engine, is an internal combustion engine that is designed with opposing cylinders on each side of a central rotating crankshaft. With the cylinders in this configuration, the opposing pistons move inward and outward at the same time. This motion mimics the arms of a boxer cycling between right and left punches. Get it?

When Was the Boxer Engine Invented?

Mercedes-Benz claims the first boxer engine was developed and invented by Karl Benz in 1897. The two-cylinder flat engine, which was known as the “contra/kontra” engine (kontra means against in German), debuted in 1899 in the Mercedes-Benz Dos-à-Dos buses. A 1.7-liter variant made 5 horsepower while a 2.7-liter variant made eight. The engine design was immediately applied to regular cars, race cars, and commercial vehicles. Mercedes-Benz, however, later shifted focus to inline engines.

Decades later in the late ‘30s and ‘40s, Volkswagen put a 1.1-liter air-cooled boxer engine into the Volkswagen Type 1 Beetle.

Porsche also traces its history with the boxer engine back to the Beetle. The company says Ferry Porsche installed a 35-horsepower four-cylinder engine in his 356-001. The first 911 featured a flat-six boxer engine.

What Are the Positives of Boxer Engines?

Everything has pros and cons. This is why boxer engines are good.

If performance is a priority or point of interest, you want your car to be as low to the ground as possible. This increases stability and improves lateral quickness and agility. With a flat engine, its weight is lower to the ground and lower within the car itself.

Additionally, because the engine is wider and flatter, it helps spread out the weight more evenly than an upright engine. This helps improve handling precision, especially around corners.

Because the engine’s movements balance each other out, the engine rocks and vibrates a whole lot less. This reduces the need for parts designed to counteract vibration and helps maintain low weight.

Because boxer engines are so flat and can be positioned so low, they can be designed to sheer off in ways a traditional upright engine could not.

What Are the Negatives of Boxer Engines?

These are the cons when contemplating the overall benefit of using a boxer engine.

One of the primary methods of increasing power is to increase the size of the engine block and cylinder bores. However, this is difficult do to the design of the boxer engine and its width, so it’s limited in that capacity.

The orientation and design of boxer engines can require additional research and development costs.

Due to the complex nature of these engines, in particular the location of items such as spark plugs, they can be quite difficult and frustrating to work on and perform basic maintenance on. Not all are tough nuts to crack, but some.

There’s a long and illustrious racing history tied to the boxer engine that dates all the way back to its inception.

Mercedes-Benz claims the first-ever boxer-engine racecar was the Benz-built racing car in 1899. Featuring an 8-horsepower two-cylinder boxer design, Mercedes-Benz’s historians say that racing driver Fritz Held, “drove it to a class victory in the Frankfurt-Cologne long-distance race over 193.2 kilometers, completing the distance at an average speed of 22.5 km/h.” For those not European, that’s 13.9 mph, so not exactly a land-speed record car.

The boxer’s true racing pedigree, however, doesn’t begin in earnest until Volkswagen and Porsche began dropping their respective air-cooled flat-fours into the VW Bug and Porsche Type 64.

The Type 64 was built for one purpose and one purpose only, to win the cross-continental Berlin-Rome race in 1939. Yes, we know exactly what was going on in Germany during that period and you’d better believe the Nazis had their hand in making the Type 64 a reality. In fact, they actually commissioned the car.

The Type 64 was essentially a Volkswagen Beetle underneath its UFO-esque skin, featuring a flat-four making a whopping 50 horsepower. That performance, along with its more aerodynamic body and low weight, meant it was capable of hitting a top speed of 99 mph. The race never materialized for reasons we’re sure you can discern. Three were built and the lone survivor later raced at a handful of rallies, including the Alpine Rally in 1950.

And from that first Type 64, you get all of Porsche’s racing history. From 911s to 914s to the mighty 911 GT1s, every single one of Hans Metzger’s creations, and everything in between can be traced back to that Type 64. Which leads us to Subaru’s racing history, one not of tarmac carnage, but rally domination.

Subaru’s first entrant into the rally world was with a car called the Leone in 1980. Equipped with the prototype of Subaru’s legendary all-wheel-drive system, the Leone was powered by a 1.6-liter four-cylinder boxer engine. A turbocharger was later added for better power. These early days were run by Noriyuki Koseki, the man behind Subaru Tecnica International (STI)—we’re sure you’ve heard of them.

Later, with the assistance of Prodrive, one of the most well-known motorsports outfits ever, Subaru’s rally efforts really began in earnest. Subaru co-developed its Group A Legacy RS with Prodrive for the 1990 season and over the next few years, refined the product with the help of Ari Vatanen and Colin McCrae. What would become of the Subaru, Prodrive, and McCrae partnership would make boxer engine acolytes out of millions.

In 1993, Subaru and Prodrive switched the Legacy RS platform to the Impreza and with its short wheelbase, brilliant blue and yellow paint scheme, and a flame-spitting turbocharged boxer four-cylinder and made heroes of Subaru, McCrae, and the boxer engine. The team would win the manufacturer’s title three times, 1995, 1996, and 1997. And the rest, well, that’s history.

Are the Porsche And Subaru Engines Related?

No, these manufacturers and engines are independent of each other.

Learning your car’s behavior, quirks, and personality can be done on your own, but you’re not exactly doing so in a vacuum. A missed braking point or target fixating on that tree over there could mean a bent bumper or some serious medical bills. Why take the chance when you can learn safely how to drive your boxer-equipped sports car from the professionals at Skip Barber Race Car Driving School?

The Drive has partnered with Skip Barber, the legendary racing school, to ensure that when you first prime your boxer’s ignition, you won’t fly off into a ditch.

FAQs About the Boxer Engine

Q. Is An Opposed-Piston Engine the Same As a Boxer Engine?

Q. Ok, So What’s the Difference Between a 180-Degree V and a Boxer Engine?

A. The difference lies in where the pistons are attached. In a 180-degree V engine, the opposing pistons are linked on the same cam pin and move accordingly. The pistons in a boxer engine, however, are attached to separate cam pins, which allows their signature synchronized dance.

Q. Then Is a Boxer Engine Reliable?

A.  This is a somewhat loaded and complicated question. On one hand, the inherent nature of the boxer’s design makes its internal components durable and reliable. However, certain engines such as those found in select WRX cars have known to have head gasket issues. Additionally, certain boxer engines can be difficult to service, which might deter owners from following their recommended service intervals. If this occurs, the car might have issues due to poor care.

Q. Given Their Age, Are Boxer Engines Outdated?

A.  Boxer engines are almost as old as the car, but outdated? Not quite. We suspect there’s good reason the most iconic and pure sports car on the planet, the Porsche 911, still uses the design.

The whole enchilada will be revealed on November 18.