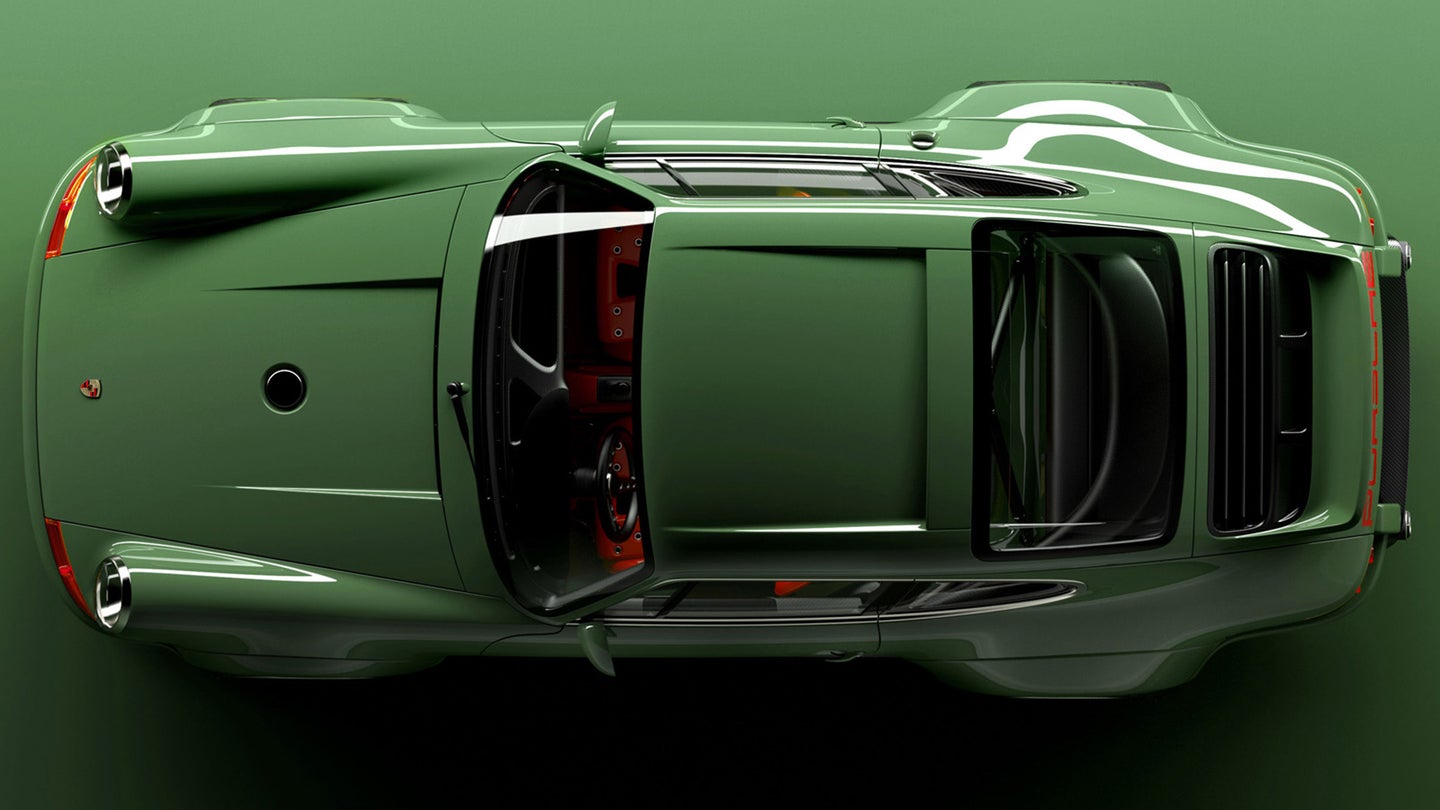 I love old Porsches. There, I said it. No matter how notoriously picky an air-cooled engine can be, there's no exact comparison to the go-kart like feeling that is getting behind the wheel of an old roadster, even if it's not as fast as a GT2. Porsche restoration company Singer has now taken an extra step to dig deeper into its 964 restoration project, making its retro-modern 911 everything you wanted and more.

Singer's latest renders are of an absinthe green Porsche that means business. The California-based restoration company is notorious for its work in the Porsche community, continually restoring and modifying customer vehicles while splitting hairs to ensure quality and prove to be a continuous display of meticulous craftsmanship. With its latest customer-commissioned restoration, Singer worked together with Williams Advanced Engineering to perform an engineering study that proves to help make the car lightweight and nimble. The effects of the Dynamics and Lightweighting Study (DLS) would be a 1990 Porsche 964 that weighs in at just 2,180 pounds thanks to a series of lightweight components from industry leaders like BBS Motorsports, Brembo, and Michelin.

The engine used in the 911 is a collaboration between Singer and Williams, which not only looks absolutely magnificent but sings like a six-cylinder Cher. The 4.0-liter horizontally opposed boxer motor was plucked from the mind of early '90s Porsche engineer, Hans Mezger, to be used in Singer's masterpiece and received an increase in displacement to reach its goal of 500 horsepower. A plethora of carbon fiber, titanium, and aluminum parts makeup the construction of the motor, allowing it to reach revs above 9,000 rpm. Despite the motor being only air-cooled, it still pumps out an impressive 500 hp.

The wheels may appear to an original classic Porsche design to the untrained eye, however, they are actually super lightweight 18-inch forged magnesium center-lock wheels manufactured by BBS. Behind the faces sit Brembo calipers softly clamped to carbon composite rotors. The transmission is manufactured by Hewland, a company known for its contribution to the performance car sector. Weight was also considered when selecting the transmission, prompting Singer to select the company's lightweight 6-speed magnesium gearbox to compliment the vehicle's power goals.

So now the important question, how much? Singer doesn't list a price publicly, citing that the cost of restorations is highly dependent on the customer's needs. To make things even more notable, only 75 customers will be able to enjoy the fruits of the DLS study, making the 500 hp air-cooled motor in the sub-2,200 pound platform even more desirable.

It might not be new and hip like the Porsche Mission E, or as nimble as the purist Carrera T, but that doesn't make it any less of a beautiful car. We can't wait to see the final product.

Peter Schutz, the Man Who Saved the Porsche 911, Has Passed Away at 87

Schutz also championed the Porsche 959 which cost him his job but helped usher in the supercar era.

Inside The Shop That Builds The 4.0-Liter Engines For Singer

The Porsche 911 has had its fun. Let’s think differently.